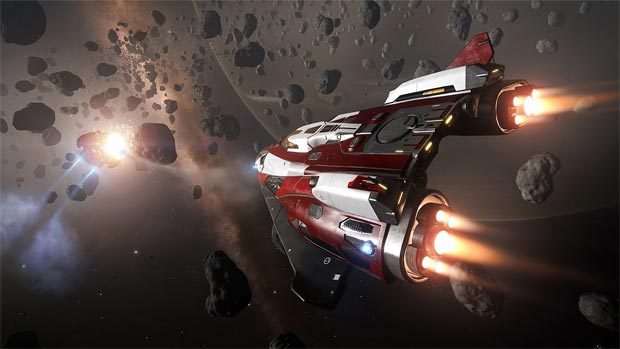 Summary: Elite Dangerous is an extremely rewarding game that is worth experiencing

Carl Sagan once said: “Imagination will often carry us to worlds that never were. But without it we go nowhere’.

With a universe consisting of billions of stars and planets, we’re a long way off from visiting the far reaches of outer space. Although that’s true in reality, Elite Dangerous may be the closest thing we’ll get to experiencing interstellar travel. Frontier Developments space-trading sim is a huge online game that lets you explore a rendition of the Milky Way Galaxy, while also giving you plenty of opportunities to set your imagination free. 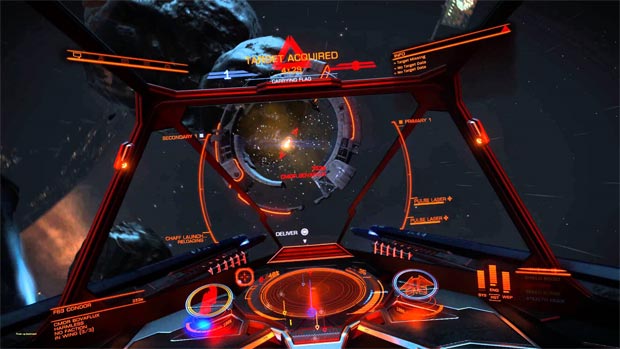 There is a story of sorts to Elite Dangerous but essentially, you can approach the game in several ways. Primarily you can play as a trader, a pirate or a bounty hunter. In order to figure out what path you want to take before heading out to the far depths of the galaxy, you can visit space stations where information is available such as lists of players with bounties on their heads or rare materials you can mine and sell at a later date.

To be honest, the first few hours playing Elite Dangerous were brutal. I spent a large amount of time going through the training programs which are there to help you become familiar with the basics such as flying, docking, jumping and combat. Suffice to say, although there are tutorials to help you get to grips with the game, Elite Dangerous certainly doesn’t hold your hand. Understanding its mechanics was a tedious and occasionally frustrating exercise. That said, with a little patience I became comfortable with the controls and while not being James T. Kirk, I was able to become a semi-competent captain and was ready to head out into the stars. 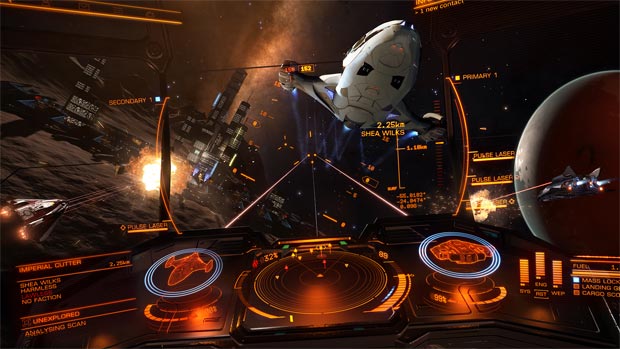 Ultimately, the goal is to make enough money to improve your ship with a plethora of upgrades but before you do, there are certain factors to bear in mind. For example, for every internal component you install, you’ll add weight and mass to your ship which in turn affects its jump range. Another example is the life-support system which is responsible for the air you breathe. If your hull is breached during combat you’ll only have a certain amount of time before you’ll run out of oxygen so upgrading this component is vital as you start to venture further out into the cosmos. Admittedly, there’s an abundance of criteria to digest and much like the controls it can be daunting at first but overall it doesn’t take too long to learn all the ins and outs.

As for exploring, the galaxy map shows you each star system and their distances. In most cases, you’ll be travelling for thousands of light-years which mean there are moments in-between travelling to each destination where you’ll be relying on your imagination to fill in the gaps. 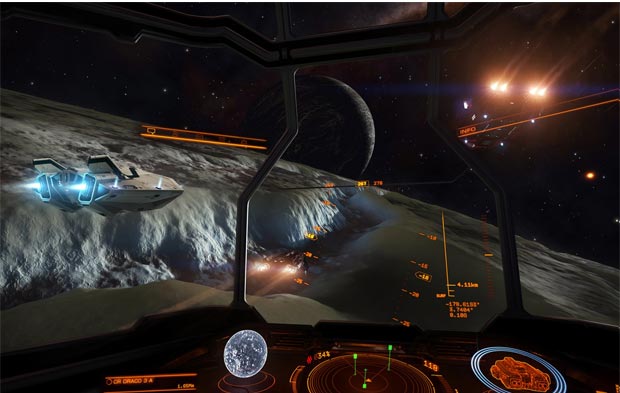 Aside from voyaging to stars and planets, you can travel to unidentified signals which may be anything from wanted criminals with sizeable bounties on their heads or other players passing through the same system as you. It’s these random encounters that make the mundane moments of Elite Dangerous tolerable. Being the bounty hunter and engaging in a space battle with another player is extremely fun as is playing the pirate and attacking other players in order to steal their cargo. Lastly, with a gargantuan map stretching for thousands of light-years, it’s not only other explorers that inhabit the galaxy. While it’s possible to see aliens during your time out in the vastness of space, whether or not you do so is completely by chance.

With stars that stretch light-years in all directions, nebulas that are a nest of vibrant colours and huge, complex planets that jump from the screen, Elite Dangerous is gorgeous to look at. Certainly, if you’re a stargazer then you will appreciate what is on offer here, as Frontier Developments representation of the Milky Way Galaxy oozes style. The sound design is also top notch, complementing the visuals making the experience of traversing through each solar system utterly engrossing. 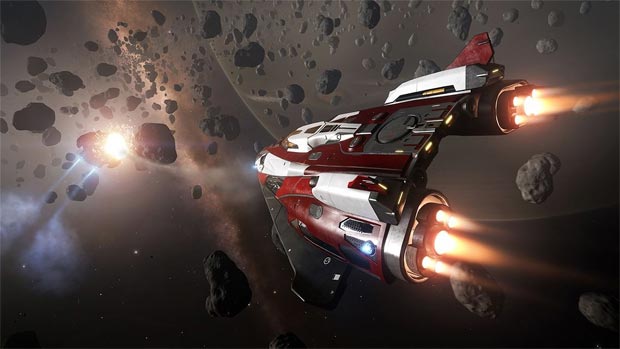 Everyone will have a different experience with Elite Dangerous and so, summing this space sim up is tricky. For me, open-world games are my favourite genre so I’m comfortable letting my imagination fill in any gaps. I had a blast travelling through the galaxy, discovering new star systems and hunting space pirates with little more than a ‘trial and error’ mentality. Sure, learning the controls was frustrating and boredom crept in when transiting from one system to another but overall the thrill of exploration and discovery dwarf any grievances I have with the game.

On the flip side, it isn’t going to be everyone’s cup of tea, especially if you’re looking for instant action or a linear playing experience. That said, with a little patience, and a bit of imagination, Elite Dangerous is an extremely rewarding game that is worth experiencing.