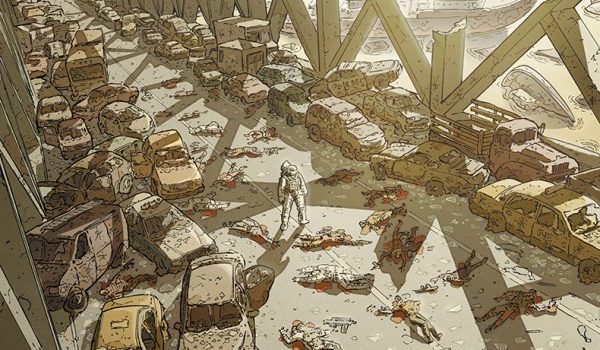 Summary: Kaplan, Timpano and Dispenza have crafted a fascinating and engaging world.

This is the final issue in the most recent arc of Zach Kaplan’s post-apocalyptic sci-fi epic, Eclipse.  In previous issues albinos that are immune to the immolating effect of the sun have been discovered.  The first was an insane murderer, and the second is a scientist looking to share his immunity.  As well, we’ve been learning how involved in suppressing the cure and controlling their populace Solarity has been.  We know they’ve rebuffed the government in the early days after the flare, and they have been less than on the up and up with the people they claim to protect.  The issue picks up in the aftermath of the last and hits the ground running.

The cover features the bridge last issue ended on.  We have one figure in a protective suit in the middle of the page, surrounded by the bodies of armed men in protective suits.  The bridge is covered in wreckage, giving the whole scene an added atmosphere of carnage.  Bloody and burned bodies are scattered about, foreshadowing that this issue is going to be loaded with action and conflict.  The washed-out glare of the son just gives us that much more of a feeling of utter loss.  I can honestly say that my initial impression based on the cover was that this was going to be a heavy and potentially depressing issue.  I was honestly concerned that our heroes were in for a real Empire Strikes Back moment.

Giovanni Timpano continues with excellent interior art, and Flavio Dispenza’s colours really bring this washed out and dangerous world to life.  The art shows the stark differences between the sunlit wasteland, and the dark land that humanity is forced to live in daily just to survive.  The combination of art and colour also does a great job amping up the tension as the story builds, and showing the fear in the characters as things begin to go off the rails.  The book continues to have a unique look that fits and enhances the story like a glove.

This issue opens with a flashback.  We learn that the two albinos that have been featured in the series did, in fact, know each other.  The first was a zealot, and the second a scientist.  The scientist is hopeful that humanity can be saved, whereas the zealot feels that mankind has been judged and is unworthy of the cure.  This gives us a good indication of the differences between the two, and shows us how much the hopeful scientist has changed to the point where he’s dangling Cielo’s life in exchange for the cure.

The rush to complete the cure before the sun rises is further complicated by Solarity’s men slowly approaching.  Only holding back to ensure that Cielo doesn’t get killed by the Scientist.  Bax soon begins to even the odds, but not quickly enough.  An explosive confrontation leads to several deaths, and the absence of Parker, who has taken the cure himself and fled.

Zack Kaplan continues to drive his greater story forward.  Even though this is very much an arc-based story, each issue is engaging enough to draw even new readers in.  Reading one issue makes you want to go back for the rest!  While this issue comes to a great conclusion for the arc, it’s clear that there is much more on the way, and with the fate of the cure still in the air, as well as the fates of Cielo and Bax.  This issue ties the current story line up nicely, while setting several plot points for the next chapter.

Kaplan, Timpano and Dispenza have crafted a fascinating and engaging world.  If you’re looking for a great sci-fi book, you’ll be hard pressed to find better than Eclipse. 5 stars out of 5! 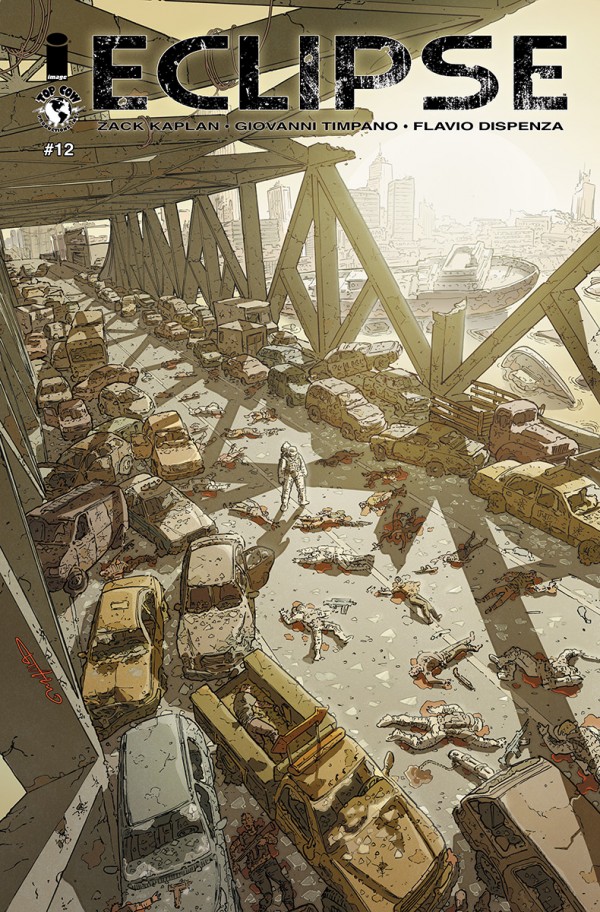