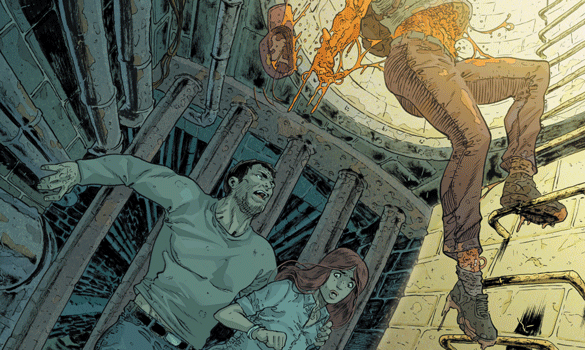 Summary: A complete and engaging issue.

The latest issue of Zack Kaplan and Giovanni Timpano’s post-apocalyptic Sci-Fi tale, Eclipse is easy to get into.  An albino has surfaced carrying the promise to a cure that would allow humans to live in the light of the sun again.  However, while there are some that are keen to unlock this cure, there are powerful groups that want to see this talk die, and the albino with it. 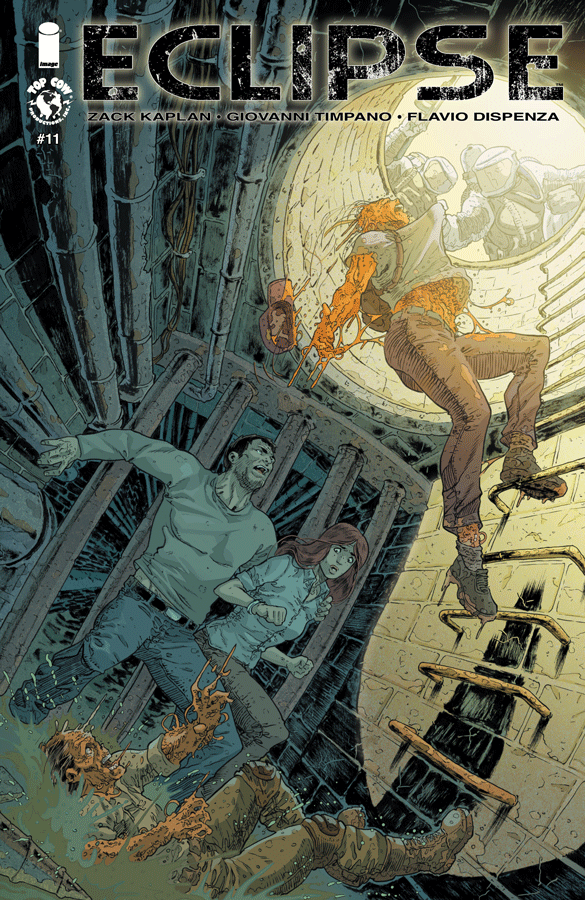 The cover features two of the protagonists, Val and Baxter hiding from the sun in the sewer.  Above we can see two men burning in the sun.  One of whom is being grabbed by a man in a protective suit.  The art on this cover is fantastic.  The detail in each of the men who had been scorched by the sun is excellent.  You can see the details of the desiccation on each body and it looks truly grotesque.  It gives a great example of just how dangerous the sun is in this world.  The cover also gives a great example of the colouring used within.  It shows the differences between the sun-bleached surface and the underground that humanity now inhabits. 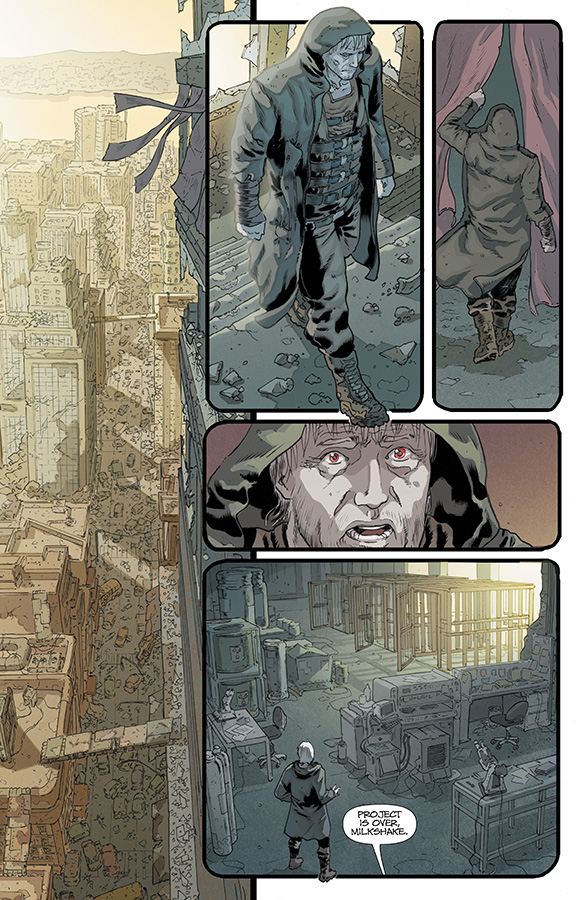 Giovanni Timpano and Flavio Dispenza handle the art and colours respectively.  The art is well detailed, and as with the cover has some more grotesque moments when featuring those that have been exposed to the sun.  The way Timpano draws the charring bodies is impressive, with flesh seeming to melt off.  The level of detail adds to how horrific it looks, and punctuates how dangerous the sun is in this world.  The colours also do a great job of contrasting the sunlit world above, and the darkness below that humanity now inhabits.

The issue begins with the albino walking into his lab with the resistance.  Only to discover it has been completely ransacked.  He is warned that Solarity is behind this, and that he had better flee soon before he is captured as well.  The story just shifts to Rose meeting with her father, the head of Solarity, and we learn some of Solarity’s origins.  He hands Rose a pendant claiming it is her mother’s and urges her to find her own way. 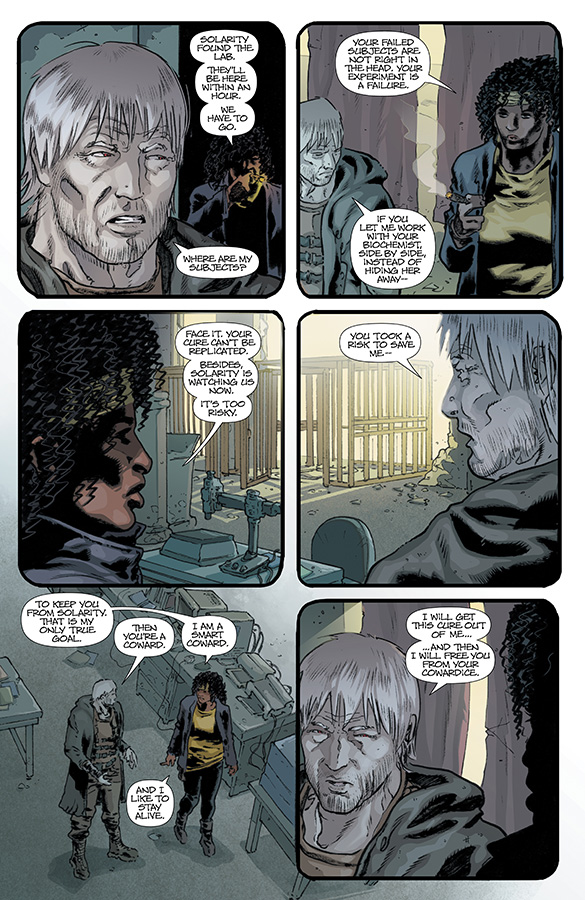 Val and Baxter are the next focus as they seek to sneak into the city.  Unfortunately, the party they are travelling with meets the fate foreshadowed on the cover.  They are taken into custody and tasked with killing the albino.  At this point Rose meets up with them again to lead them to the albino.  But her team soon disables the trackers placed on their truck by Solarity.  They quickly rendezvous with the albino, and are ambushed by Solarity forces following the tracker Rose’s pendant.  With her being betrayed by her father and the Solarity forces holding all hope for a cure at gunpoint, things don’t look good for our protagonists.

Overall this is a very complete issue.  Though it comes at the tail end of a story arc, it’s still very engaging and easy to get into.  Zack Kaplan writes an engaging and immersive story, and as with previous issues proves again that he is one of the strongest writers in Sci-Fi comics today.  The art does an excellent job of supporting and enhancing the story. It gives feeling and depth to the world Eclipse is set in. 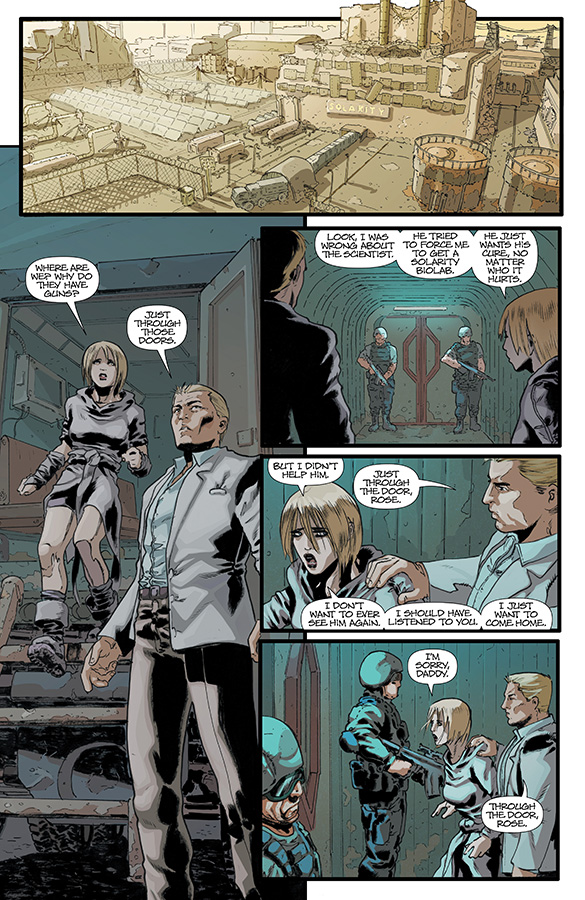 The characters are engaging, and we can feel both their hope and desperation as they try to find hope for the future of humanity in this world.  This issue ends on a great cliff-hanger.  It leaves readers to wonder if the albino will meet his doom at the hand of Solarity’s ambush.  The issue does a great job of being a complete read in and of itself, and setting up what could be an amazing issue #12.

This issue is a great read with amazing art. 4.5 out of 5 stars.