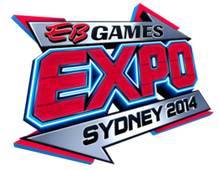 Playing some of the world’s biggest unreleased games isn’t enough for you? Well there is even more to see and do at this year’s EB Expo! Australia’s premiere video game event is being held at Sydney Showground, Sydney Olympic Park, from October 3 to 5. Tickets on sale now at EB Games stores, online www.ebexpo.com.au and through Oztix.

Seasoned gaming aficionados and Australian families alike will have the opportunity to play and experience the latest and greatest in next gen gaming with the second announcement of games such as Tom Clancy’s The Division, Mortal Kombat X, Call of Duty: Advanced Warfare, Formula 1, Adventure Time: The Secret of the Nameless Kingdom, FIFA 15, Lara Croft and the Temple of Osiris, Dead Island 2, Dying Light, Gauntlet, Sleeping Dogs Definitive Edition, Assassin’s Creed: Rogue, and The Evil Within.

As well as offering hands-on action with The Evil Within, the Bethesda booth will also feature an interactive maze with real-life characters from the game roaming around the pathways for anyone brave enough to enter. Influenced by Warner Bros. Movie World’s ‘Fright Nights’ teaser maze, attendees will experience a whole new level of terror!

League of Legends is heading back to EB Expo for MOBA fans and newbies alike. Be on hand at the League of Legends booth for the Oceanic Final tournament to watch the region’s best teams battle it out for the top spot and check out the live broadcast of the World Championship group stages from Taiwan.

Come and join us at the EA Sports FIFA 15 tournament taking place on the FIFA Vans, where you can be crowned FIFA 15 Champion and win some exclusive prizes! Make sure you get in quick, as places are limited.

The EB Expo will also offer an EXCLUSIVE LIVE cross from the US with a satellite Q&A with X-MEN star Shawn Ashmore (ICEMAN) and a special screening of X-MEN: Days of Future Past to launch the Digital HD release. The satellite cross will be followed by a presentation from Digital Effects Supervisor Adam Paschke of Rising Sun Pictures. He will reveal the secrets behind how they literally made time stand still, using an astonishing blend of live action, computer-generated objects and extensive visual effects.

A detailed schedule of sessions and events can be found at the EB Expo website www.ebexpo.com.au. Tickets selling fast!