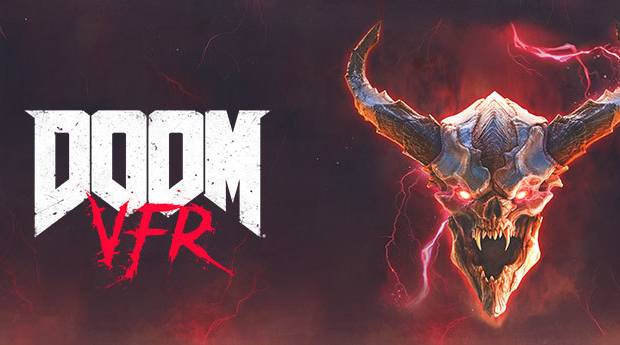 Summary: ... a sensation that only a Doom game can provide, the epicness is cranked up to eleven when playing in VR.

Following hot on the heels of their excellent Skyrim VR port comes Bethesda’s next big AAA stab at the format, the charmingly titled Doom VFR.

With 2016’s frantically paced reboot capturing the hearts of minds and gamers everywhere, Bethesda decided to see if that game’s balls to the wall gameplay ethos would translate to the burgeoning VR technology, and the end result is a surprisingly solid experience, particularly seeing that it mostly eschews the wave based frontal assaults that similar games of its ilk employ due to the limited movement options that many PSVR games suffer from. 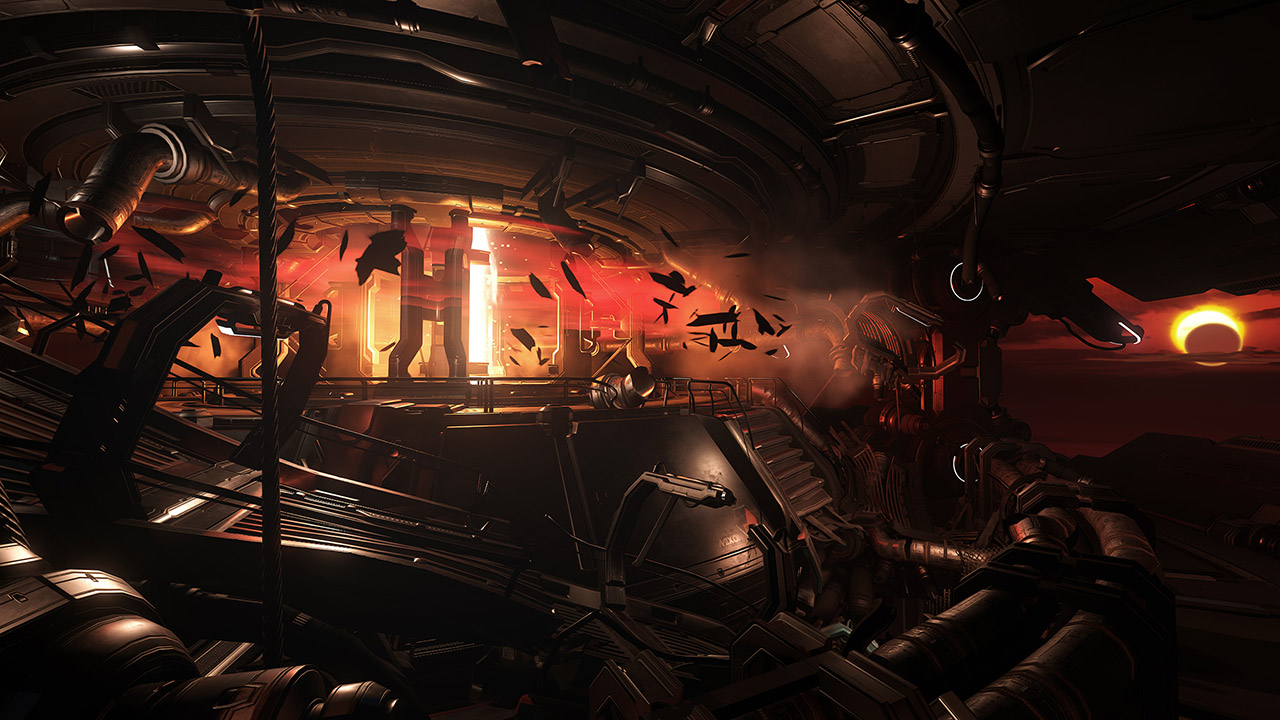 Indeed, implementing a comfortable control scheme for Sony’s relatively archaic Move controllers has been a major issue for many PSVR developers, with point to point teleportation being the preferred method, at least until Bethesda implanted free locomotion in Skyrim VR using the Move as a joystick.

Doom VFR doesn’t quite manage to overcome this hurdle created by lack of Move analogue sticks but Bethesda certainly make an admirable effort, giving players the choice between three different control schemes – Playing with the DS4 and using your head to aim a la Resident Evil VII, wielding your Move controllers like pistols as you would in Until Dawn: Rush of Blood or grabbing your aim controller and capping any mofo that wanders into your line of vision.

Although there’s a fair bit of variety in terms of the control schemes available, none of them manage to quite nail it one hundred percent; for me, using the Aim controller with the analogue sticks to allow for free movement was my preferred method but I had to ignore the strange grenade hand jutting from the side of my vision as the game is generally built around dual wielding. 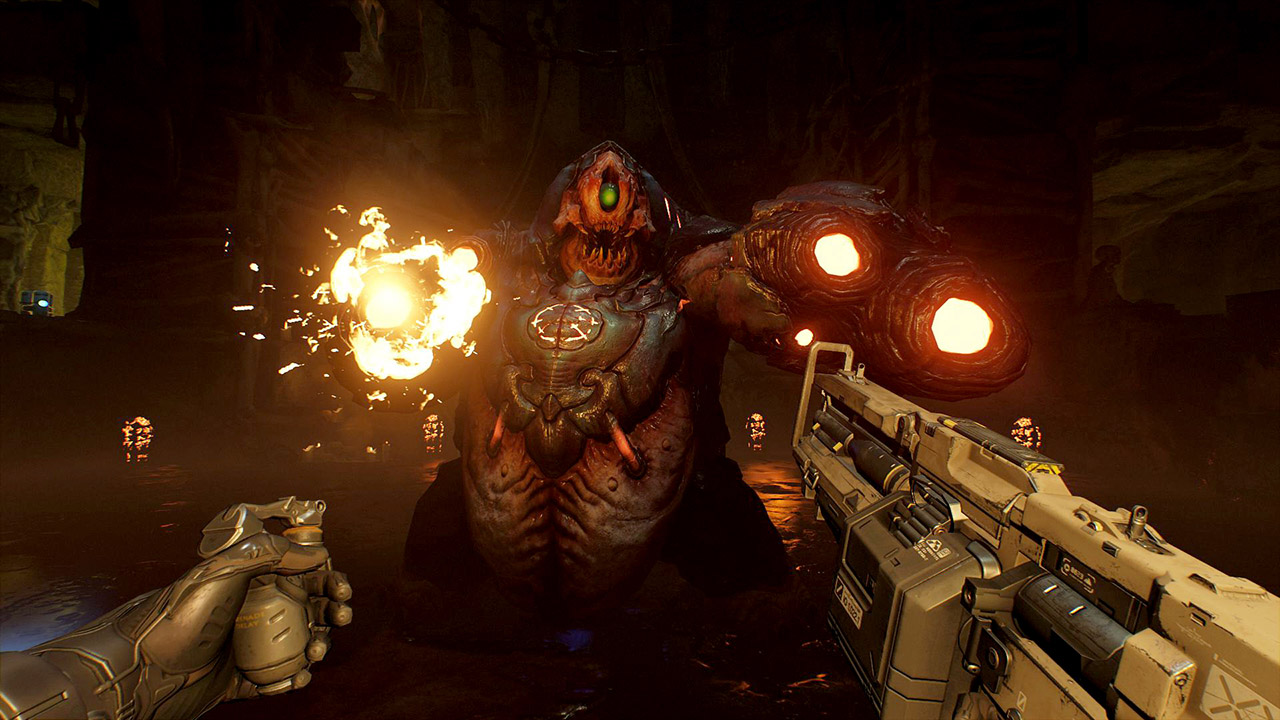 Using the moves alleviated the weird unused hand issue but I then had to contend with relying solely upon the teleportation mechanic, which comes in handy when using free locomotion but is extremely cumbersome when it becomes your sole means of getting around.

Finally, the DS4, whilst offering easily the best maneuverability, is generally my last resort for VR titles, as the immersion factor is increased exponentially when using the Moves or the Aim; as such, I barely resorted to this control scheme but concede that, given the issues present with the other two main forms of controlling the game, that using the DS4 would probably be the best option for most gamers.

Even when using completely free movement, teleportation still plays a large part in getting around, allowing you to easily access higher ground and burst enemies like gory water balloons whenever you teleport into them. 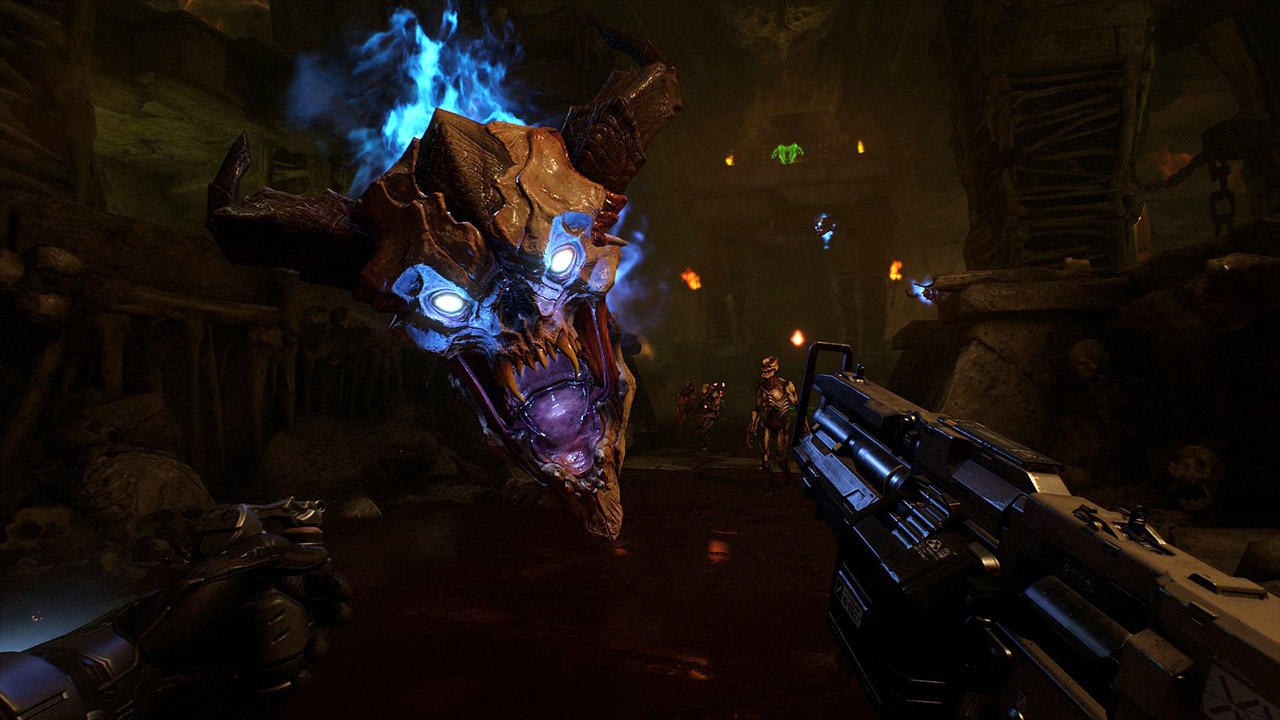 There is an actual explanation for the teleportation mechanic within the story of the game, which is as bare bones as you’d expect given that most of the focus is on cracking skulls; you play a scientist who, after dying during the event that unleashed the fiends of hell, comes to as a form of artificial intelligence who can inhabit robots and embarks upon a quest to get the hell out of dodge.

The concept of switching between robotic bodies is something that could have been potentially explored more but, hey, this is a Doom game, who’s got time to sit and listen to lengthy spiels of exposition when there’s a stack of weapons to find and even more demons to slay?

Not this guy, that’s for sure.

Speaking of the arsenal at hand, if you played through 2016’s Doom then you’ll be familiar with what’s on offer here, ranging from your usual Plasma rifles and Shotguns to the iconic BFG, which operates as a grenade this time around and will obliterate all and sundry within the immediate area.

Perhaps the biggest difference in terms of combat between Doom VFR and its older sibling is the aforementioned action of teleporting into enemies, this game’s take on Glory Kills; you can chain attacks and clear a room in seconds when fully mastered, with no diminishing returns in terms of the satisfaction gained by suddenly emerging within an unsuspecting foe. 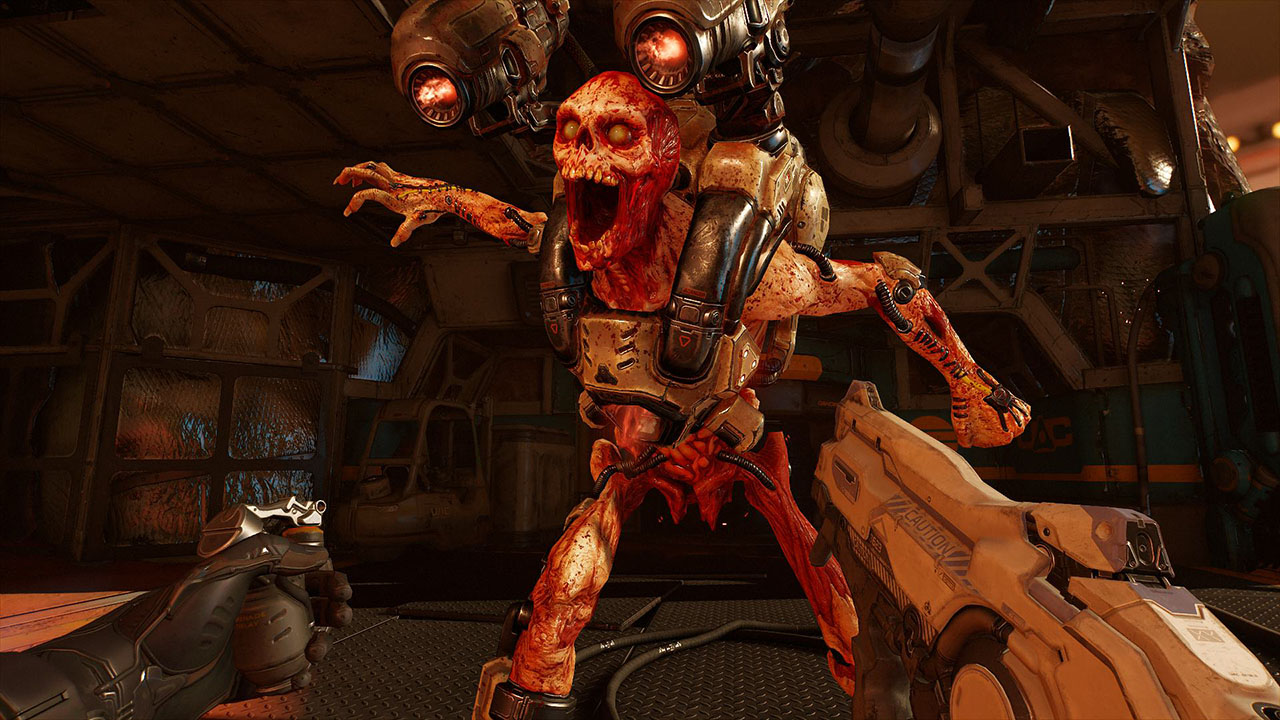 The AI keeps you on your toes, with enemies constantly flanking you and wearing you down through sheer attrition as you blast through wave after wave. It must be said that, between this and Skyrim VR, I’m finding that I’m spending more protracted periods using PSVR, capping out on average two to three hours of steady gameplay in contrast to the hour/hour-half sessions of old.

I did switch to a PS4 Pro not long after getting Skyrim, so that may also be a contributing factor, but there’s just something about Bethesda’s VR efforts that seem to draw me into the world of the game with absolutely none of the discomfort that limits my gameplay time with other titles.

Whilst this is generally a good thing, with Doom VFR it meant that I’d ploughed through the campaign in two sessions, which stands as a testament to how engaging the game is as well as a slight indictment upon the perfunctory length. I do give Doom VFR a pass though as it’s an entirely new experience built from the ground up specifically for VR, but another three or four hours would have really hit that sweet spot. 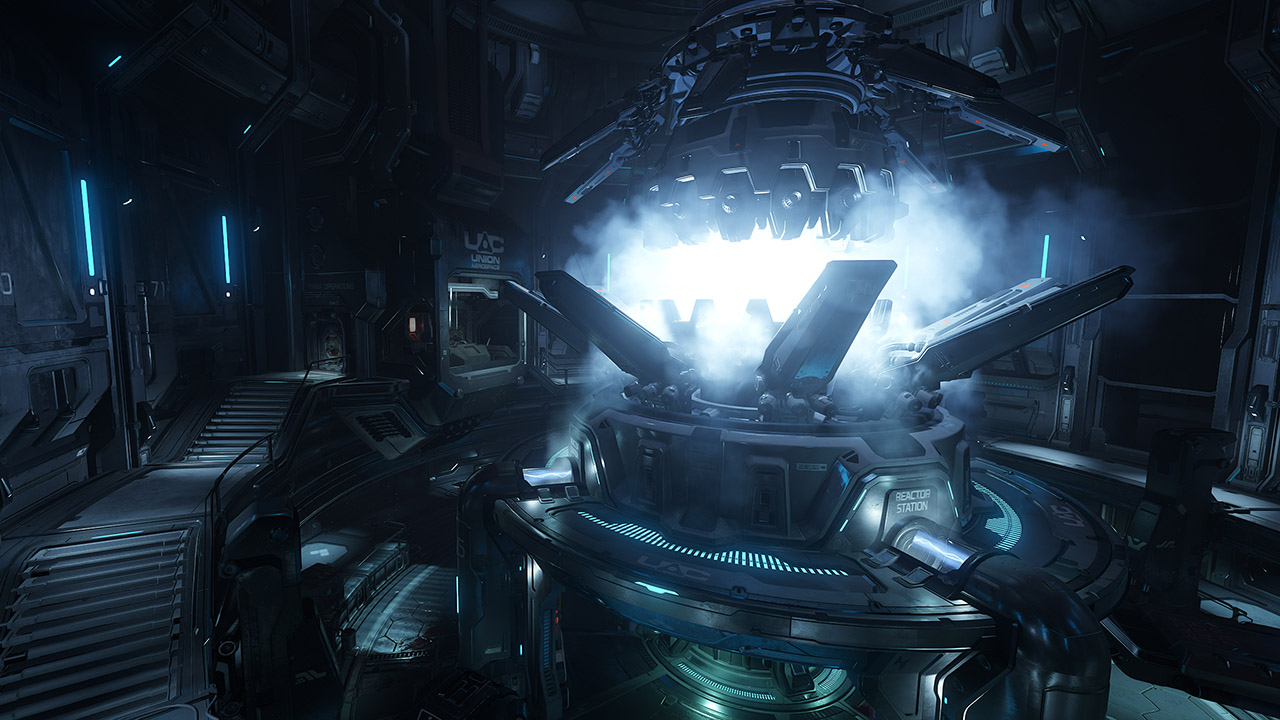 Doom VFR can look a little lacklustre at times but, in general, the visuals are among the best currently available on the format. A lot of developers struggle with the graphical limitations presented by the PSVR but Doom VFR, with its uniquely garish and colourful art direction in stark contrast to the drab greys and browns of most FPS shooters, treads the line between realism and cartoonish, over-the-top creatures and gore with finesse. There were some instances of pop in but these were few and far between and the game never suffered for it.

Doom’s music is… Well, it’s dubstep and metal married together and gets the adrenaline pumping like nothing else; face melting guitar riffs and electronic beats make for a glorious soundtrack to one man’s personal war against the denizens of hell and, much like in the previous game, Bethesda has nailed the soundtrack one hundred percent.

The few lulls between fart rock tracks let you gain an appreciation for the rest of the audio design, with ambient sounds and the ravenous snarls of your enemies really helping to sell the immersion. 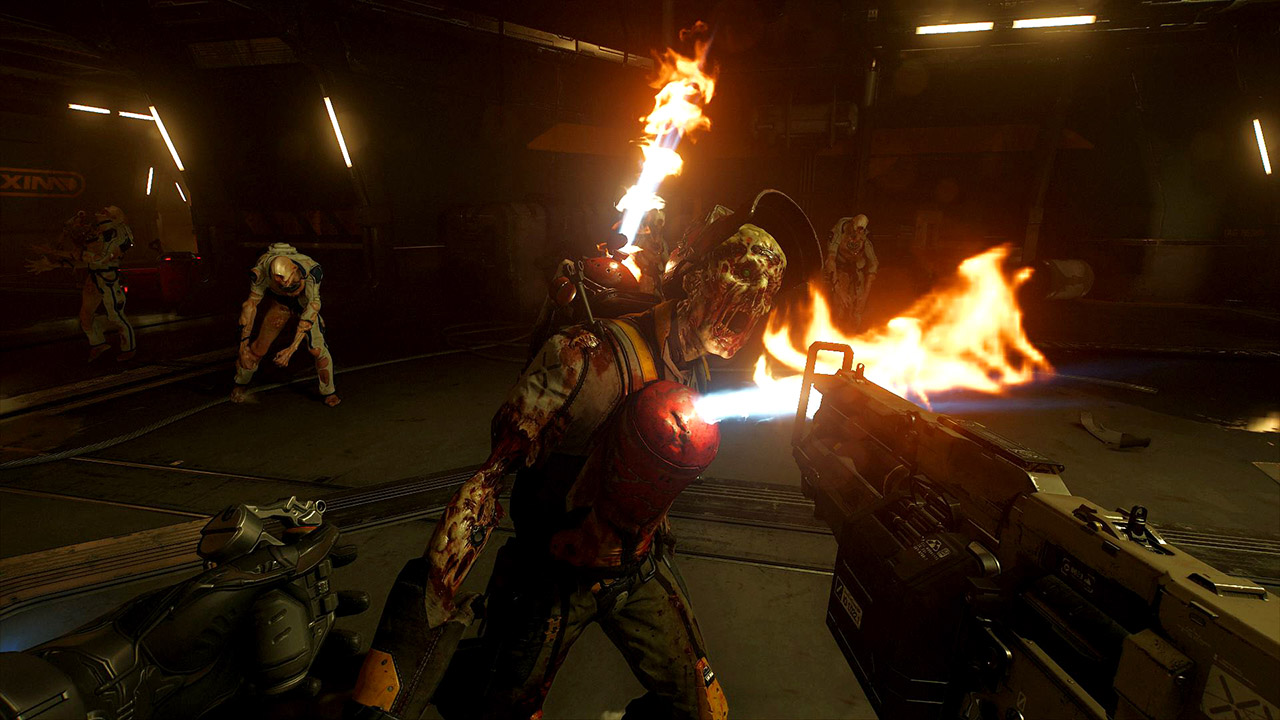 When you drop into an area and the electronic bass is pumping and screeching away like a Transformer humping a washing machine and then all of a sudden, as demons attack from all directions, a shredding guitar riff kicks in and disintegrates every pair of panties in a twelve mile radius with the sheer fucking Metal brutality of the whole scenario… Well, that’s a sensation that only a Doom game can provide, and this epicness is cranked up to eleven when playing in VR.

The game’s biggest problem is with the three different control schemes, with none of them feeling quite right; once you adjust to their individual quirks they’re all fairly manageable but both the Aim controller and the Moves need a bit more work before they’ll be truly comfortable to use; Bethesda could possibly look to how the Moves operated in Skyrim VR and implement a similar scheme to allow free locomotion, as I feel that dual wielding the moves with full movement would be the ideal way to play the game as the developers intended. 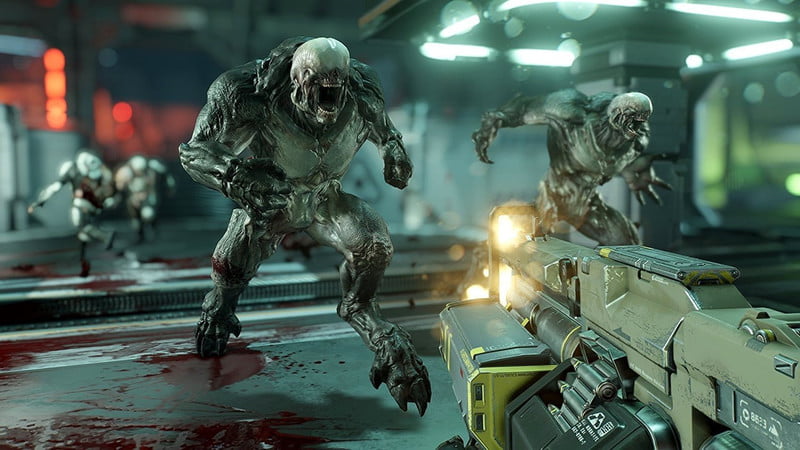 It’s a little on the short side, which is reflected in the budget price, but the sheer joy that you’ll feel when clearing out a room full of beasts intent on feasting on your entrails more than makes this an easy recommend for me.

With two top quality PSVR efforts under their belts, Bethesda have shown that they believe in the potential behind the technology and, with such a powerhouse backing the format, I’m hoping for even bigger and better things on the horizon.

For now though, I’m just content to pop Demons like a fry cook’s pimples until Fallout 4 VR drops. 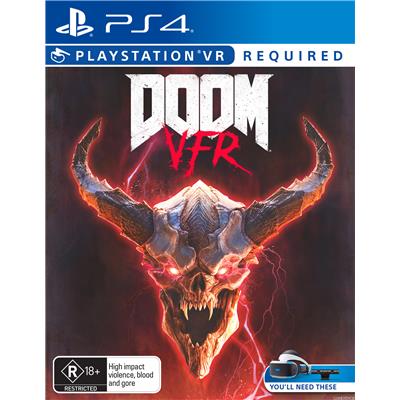