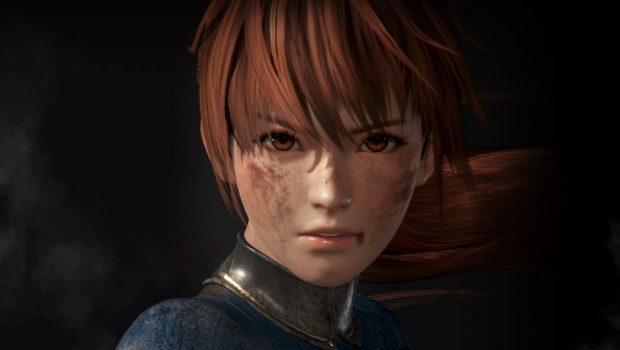 Summary: DoA 6 offers fast and frantic fighting gameplay wrapped up in its signature sex appeal to deliver a solid entry in the series - but it lacks single-player and online content to match its contemporaries in the genre and truly shine.

Dead or Alive has been one of my greatest guilty pleasures in the video game space.

I’ve played all titles in the main series since the original PlayStation, and enjoyed its addictive rock-paper-scissors fighting mechanics as well as its unabashed flaunting of its female (and male) roster’s sex appeal to stand out from the crowded fighting game genre. DoA 6 continues to deliver in these areas as another solid entry in terms of gameplay and visuals, but fails to match its contemporaries in both the single-player and online content it offers at launch.

I’ve enjoyed the Dead or Alive series over the years for its pick-up-and-play gameplay that is inviting to both casuals and fighting game fanatics. I consider myself somewhere in the middle, and DOA’s Triangle System – holds beat strikes, strikes beat throws, throws beat holds – continues to offer up an incredibly well balanced and refined fighting system that generously rewards tactical players and helps them powerfully punish mindless spamming. Fights feel fast, frantic and fun as ever, accommodating both defensive and offensive play so that no two players resort to the same type of approach; combined with the new stages and their unique environmental hazards, each hit and every victory feels enthralling and well-earned. 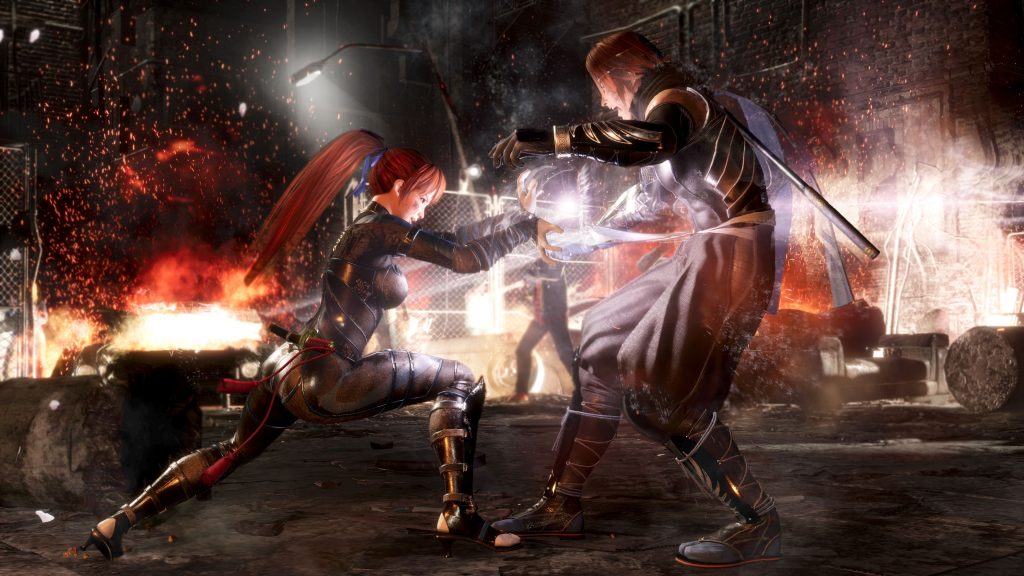 With an array of new combos, grapples, and counters, DoA 6 expands upon the already solid brawler combat with several new mechanics and visual effects to match. The Break Gauge is a new two-part super meter that fills during battle while you both dish out the pain and absorb it; with the press of a button once full, you can perform a Break Blow to parry and land a powerful special attack or a Break Hold for a guaranteed counter to low, mid and high attacks – both especially useful to get out of a tight bind. The Fatal Rush is a new four-part combo string also powered by the Break Gauge that finishes with a critical blow delivered to the opponent and a flashy close-up of the damage; while it’s easily counterable, it’s great for surprise attacks and for new players still learning the ropes.

DoA 6 boasts a roster of 24 playable characters at launch, with three more available as DLC (Nyotengu and Phase 4, with Mai Shiranui from King of Fighters as the first of two SNK guest characters). Almost all series mainstays are in (RIP Gen Fu), with two new characters: Diego, a Mexican-American street brawler, and NiCO, a Finnish scientist with more outlandish fighting capabilities. Both aren’t as immediately interesting in their playstyles as newcomers from past entries, but are welcome additions nonetheless. Most returning characters retain their extensive movelists with certain alterations and all play incredibly different to each other, offering up a ton of fun in terms of gameplay options and combos. It’s clear, however, that the limelight is on the female fighters, with every ounce of care and glamour imbued in their porcelain doll appearances, fighting animations and “sexy” costumes.

Speaking of sexy, while the pre-release babble around DOA 6 was its apparent toning down of the breast physics and shameless sex appeal that defined the franchise throughout the 2000s, it’s clear this is not the case – and a post-launch update will apparently enhance the jiggling further. While several characters have new default costumes with a little less skin on display, the unlockable costumes and DLC cosmetics clearly put the TNA upfront as it always has been. For fans of the series, this is good news, but for outsiders or fighting game enthusiasts looking to get into the latest entry based on the developer’s promises of less sexualisation, this game won’t change your mind. 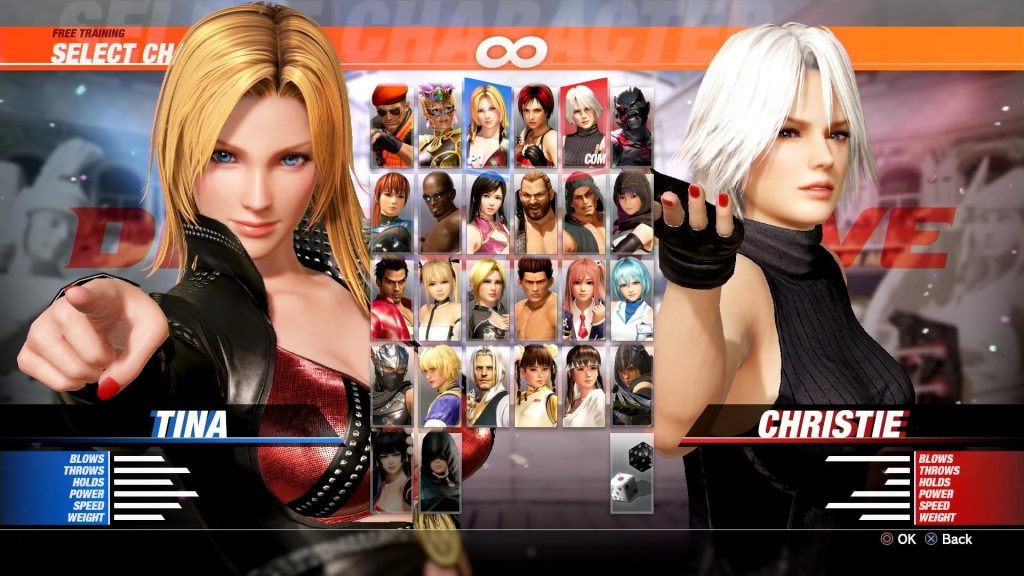 As a fan of Mortal Kombat, which occupies the same genre and tantalises gamers with extreme gore and violence, Dead or Alive 6 embraces its use of titillation and sexualisation as expected to appease and cater to its fans. If had one major problem with the game in this area, it would be in the brain-dead portrayal of both its male and female cast, who embody the worst of popular anime tropes, offer vapid dialogue and have background history as interesting as watching paint dry. If they’re gonna be sexy, at least give them personality. Given it’s the sixth entry, it’s disappointing to see.

Dead or Alive 6 offers an embarrassingly nonsensical narrative that barely constitutes a proper “Story Mode”. Spread across several chapters, you’ll fight in brief bouts against the entire cast in a series of loosely connected events that tell the story of the latest Dead or Alive tournament – and the recurring franchise subplots surrounding the sinister Viktor Donovan and the ninja antics of the Mugen Tenshin clan. It’s told out of chronological order and could have proven more interesting had Team Ninja put some actual effort into building intrigue,  fleshing out character motivations and further exploring the inner workings of the tournament backdrop, but the end result is anything but. Characters fight for the flimsiest of reasons, dialogue is inane and cringe-worthy, and cutscenes are almost always over before anything of note occurs.

The lacklustre story mode is especially disappointing given it’s an era where fighting games like Injustice 2, Mortal Kombat X and Soul Calibur 6 have gone all out in delivering solid single-player story content in addition to the genre’s online and Arcade Mode staples. I found it personally perplexing given past entries like DoA 3 and DoA 4 balanced the ridiculousness of the franchise’s sex’d up cast and its ninja/sci-fi war backdrop with a relatively entertaining ongoing storyline; Team Ninja definitely need to go back to the drawing board in future titles. 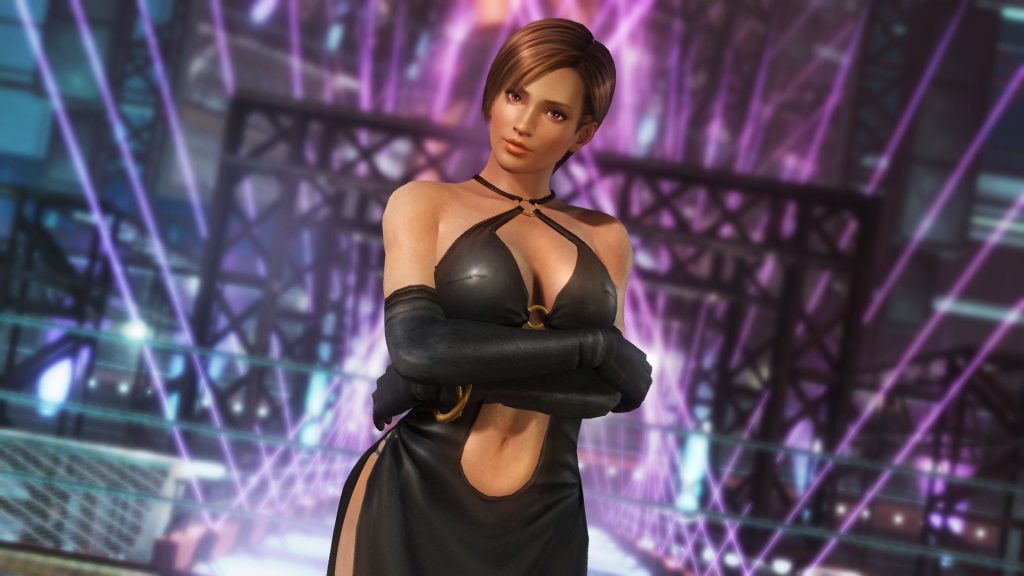 As for other games modes – both online-focused and single-player – DoA 6 falters somewhat. At launch, there are no multiplayer lobbies or non-ranked options: Ranked is the only mode on offer, with the promise of a Lobby mode in post-release patch. Online play is smooth for the most part, and allows you to view the connection type and speed of opponents so you’re not locked into a laggy fight, but the lack of basic features such as lobbies in the base package compared to past entries is a perplexing decision in this day and age. Elsewhere, the staples – Combo Challenges, Versus, Training and Tutorial Modes – return in full force, and DoA 6 still delivers some of the most comprehensive character and move-list training of any fighting game.

The two new single-player modes – DoA Quest and DoA Central – are hit and miss. The former is a series of battles with three sub-objectives (such as defeating an enemy with a specific type of move) that reward players with in-game money to purchase new music, titles and story trivia (the lore on offer is poor quality). Completing all sub-objectives unlocks stars to progress to the later tiers, and costume points as part of a progression system. All of these unlocks are purchasable and viewable in DoA Central, with female characters having over 4 costumes and a variety of attachments to unlock, while male characters only get 2 – not including DLC.

I always welcome unlockable cosmetics in games versus purchasing everything outright via microtransactions, but the in-game grind for new character customisation options is hamstrung by both the extremely low rate of points awarded after matches and the random nature of unlocking points in other modes – you don’t get to pick where your costume points are spent, meaning you could potentially play for dozens of hours without unlocking options for characters you like. What’s worse is once you actually get enough points, it merely acts as an unlock mechanism; you still have to purchase the costume with in-game money to wear it. With the Season Pass being over AUD $120, your customisation options are unnecessarily limited given past DoA entries were generous with both unlocks and individually purchasable DLC costumes. 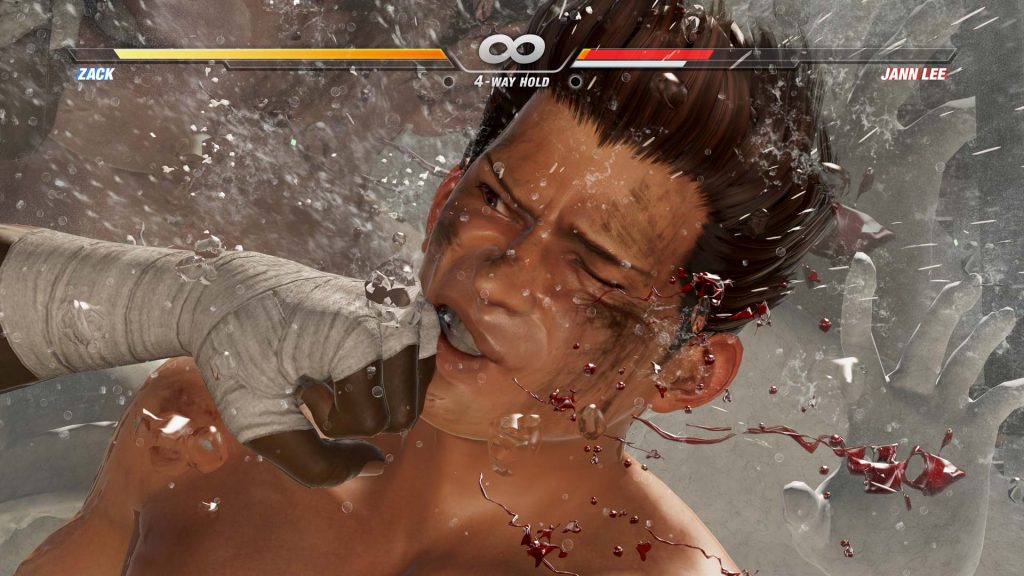 Presentation-wise, DoA 6 remains on the front-foot with gorgeously detailed cutscenes, character models, dynamic environments and blood, dirt and sweat effects rendered in-engine. Fights are appropriately messy affairs thanks to the new effects and close-ups when landing hard blows, with bits of costumes falling off to display damage. As a game which places its marketing emphasis on the deadly beauty of its female roster, it’s unsurprisingly to see every fighter dressed to the 9s and looking like supermodels – though if you’re one embarrassed by the sight of the more ridiculously dressed characters like Marie Rose and Honoka owing to the game’s Japanese origins, your opinions may vary in the aesthetics department (I’m personally not a fan, but the existence of La Mariposa lets me ignore them). Even the male characters are beefed up and looking fly, proving Team Ninja are paying attention to every demographic that makes up its eager fanbase.

The BGM, too, is just as infectious and heart-pumping as past games, with plenty of unlockable tracks to enjoy. The one thing I will say are the facial expressions sometimes lean towards overly doll-like, and unfortunately the English voice-overs (for anyone that cares) veer towards the cringiest performance work of any 2019 video game released so far. The story mode’s peculiar use of brief cutscenes and D-movie writing wastes the graphical prowess on offer.

Dead or Alive 6 is a fast and fun ‘pick-up-and-play’ fighting game with an incredibly balanced rock-paper-scissors combat system that rewards mastery of its many complex move-lists and combos – while still offering casuals plenty of beginner-friendly options to work with thanks to the new Break Gauge mechanics and variety of roster options to accommodate different playstyles.

As a fan of other fighting game mainstays like Mortal Kombat, Soul Calibur and Tekken, DoA 6 absolutely deserves to be a part of the same conversation when it comes to the quality of its brawler gameplay. The criticisms it warrants from its sexualisation of the cast is subjective given MK is praised for its use of extreme violence, but what does lower its value compared to what its competitors offer are its barebones online options, a terrible grind-heavy customisation unlock system (temporarily fixed in patches) and what is the worst story mode from any modern fighting game released this generation.

If all you care about is the fighting mechanics, DoA 6 remains a solid entry. Just don’t expect it to match the evolving single-player and online content of its contemporaries, at least until the next title.