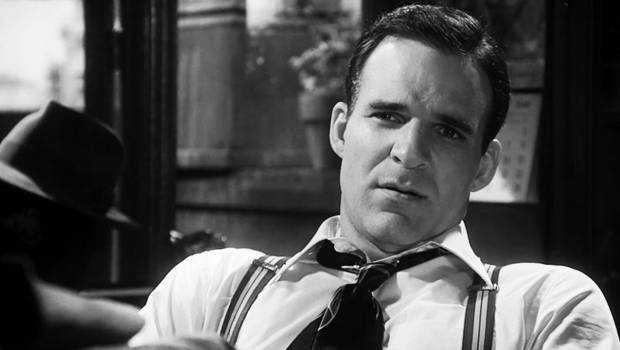 A film with a title like “Dead Men Don’t Wear Plaid” was always going to be a strange beast. It’s a black and white parody that was made in 1982. It spoofs 1940s noir and detective films and it’s a collaboration between Steve Martin and Carl Reiner. It’s also a zany lot of weird, old fun.

This film is written by the aforementioned along with George Gipe, although you almost get the sense that an extra writing credit or ten should be set aside for a slew of other writers who penned period thrillers. You see this film actually uses scenes from these famous movies, so that it looks like Martin and co. are actually interacting with the likes of Humphrey Bogart, Cary Grant, Joan Crawford and Veronica Lane, to name a few. It’s a clever premise and the cinematography is top-notch, even if some of the jokes seem a tad juvenile (like a play on number twos, for instance).

Steve Martin stars as Rigby Reardon, a private eye with a fast pair of hands and an on-going joke about rearranging a stranger’s breasts, which feels mighty wrong in this day and age. He meets a beautiful dame named Juliet Forrest (a gorgeous, Rachel Ward) who comes a-knocking at his door for help. Her father was a renowned scientist, philanthropist, father of three and a cheesemaker. He is found dead. Some say it’s an accident but Forrest believes its foul play and tasks Rigby with the job of finding out the culprit.

This kicks off a bizarre investigation that sees these two oddballs chasing after the friends and enemies of Carlotta. They also wind up on an island off Peru. The proceedings feel more like a run of comedy sketches then a cohesive whole at times. It’s fun stuff, provided you aren’t easily offended or don’t go thinking too hard about things like Reiner’s bad cameo as a Nazi or Forrest’s method of extracting bullets.

“Dead Men Don’t Wear Plaid” has its moments provided you don’t mind something that is politically incorrect and off-beat. This film is an absolute pastiche of different genres and tones. As a Steve Martin vehicle, it’s certainly not his best work but it isn’t his worst one either. So if the idea of Martin playing true detective along with a wacky cast of Hollywood glams is your thing then let’s just call this one, case closed.