Summary: Dangerous Driving is an interactive cinematic-thrill-seeker experience, take down other opponents to win!

Strap in and buckle up, because Dangerous Driving is an absolute winner.

This is not just another racing game, nor is it just a game; it would in fact be fair to say that Dangerous Driving is an interactive cinematic-thrill-seeker experience. The first thing you will notice is crisp sharp textures, smooth curves, reflections and shadows.

This game aims to answer the question, how would you drive if nobody was watching and there were no consequences? This is achieved by several game play modes including:

The game incorporates many tracks and backgrounds that are challenging and complex. These include sharp turns, oncoming traffic, forked roads and barriers, exceptionally skilled AI drivers and 27 high performance vehicles in six categories. Of course not forgetting some very ‘schmick paint jobs. 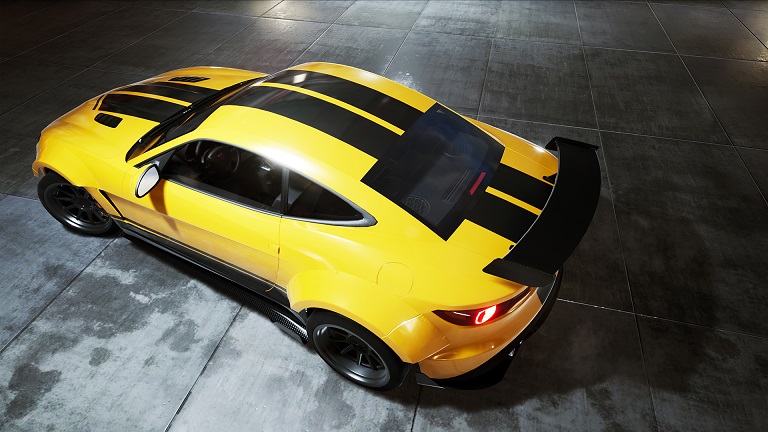 Many racing games and real life for that matter – prefer that you don’t crash. Damage slows you down, can stop the race or disable your car. Now, that can be said for Dangerous Driving also, but that’s precisely the aim of the game. Just like a big game of bowls or snooker, well you just want to get close enough to PIT the other vehicle or drive it into the rail or oncoming traffic, or drive so close to oncoming traffic that you almost smash. Doing so will earn you points, boost or meet other conditions to further your race. 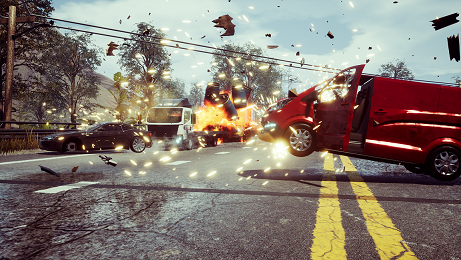 Of course, if you drive head-on into a truck at 200Mph, you will leave a mark in the first ¼ of your vehicle, its physics after all. But with carefully placed skill and precision, you can weave in and out of oncoming traffic and opponent vehicles, score some boost, press the A button and launch passed one opponent, cripple another and win the race.

The games heads up display is by far inspired. The layout is neat, concise and non-distracting. At a glance you know how fast you are going; you know how much time you have remaining, and if you have any boost available. The colour scheme also just fits, especially when there are notifications in the center of the screen, such as goals, placement and takedown notifications, it’s simply non-intrusive and allows you to keep playing. So many other games don’t get this right and breaks the continuity, this game doesn’t do that. 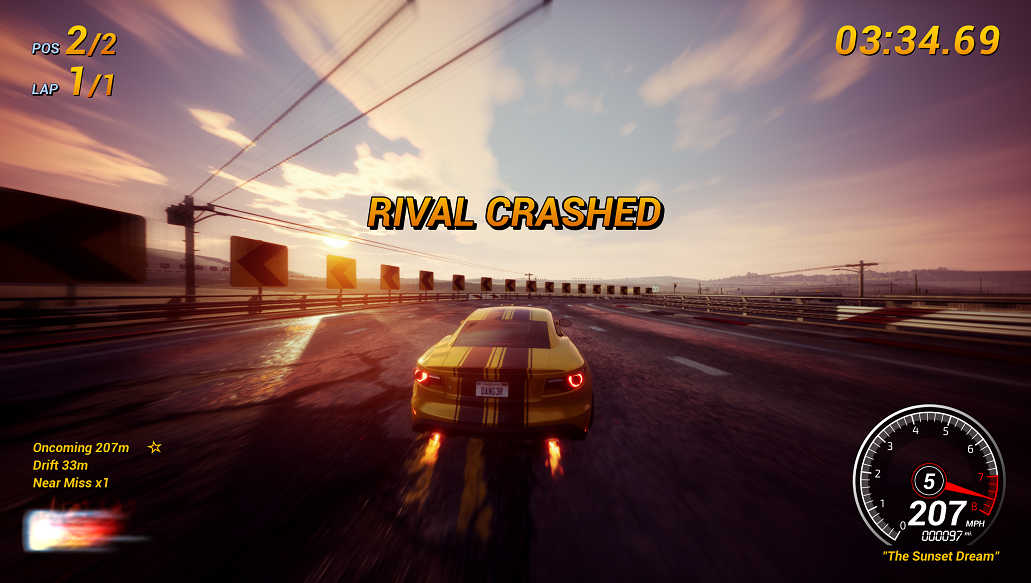 The game play is very fast paced. When you press the boost button you will feel like you are controlling a rocket on wheels. If you were physically in that car you would be feeling some anxiety and some wetness in your seat. Interestingly, in some cases, speed increases your steering smoothness and controllability, but it also reduces your visibility. In fact this is exactly the kind of game where you would sit with your friends taking turns playing, crashing and declaring that the truck, car, tree, barrier or some other mirage has “appeared out of nowhere”.

Also a great fun feature which you can choose to disable in the settings is the takedown camera. Each time you do takedown an opponent vehicle, the game takes focus and gives you an instant replay of the take down, showing point of impact or the carnage that you were responsible for. This is actually a good ‘break’ for your brain enabling you to momentarily focus, or wipe the sweat off your brow, whilst you rejoice and praise your skills.

When you first play the game you are restricted to a Race and must place in the top 3 in order to unlock further vehicles and tracks. At first, it may seem hard, because again the game is fast paced and without being familiar to this style of racing you can be forgiven for thinking that the game is too hard and ‘impossible’. However give it some practice, perhaps a few attempts and you will learn the layout of the track, the corners to drift or break on and most importantly above all else, the boost.

Each of the six classes of vehicles has a standard base vehicle, tuned, advanced and prototype variants. To get the good stuff you have to win gold, but you can be a bit clever here and take the bronze, work your way up from there. Each variant of the vehicle lends itself better to different kinds of races, for example the prototype cars are optimised for racing whereas advanced cars are stronger and re-enforced for a bit of road rage. 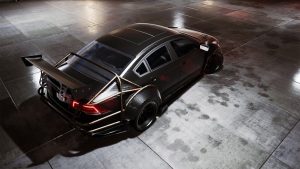 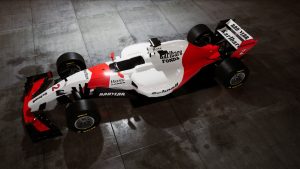 This game is fantastic to play with the AI, so it will be interesting to see how awesome it is when the multiplayer portion of the game is launched, which is approx. a month from official release

The game is able to link into your premium Spotify account to give you the personal soundtrack that you desire, otherwise it uses the developers sound track, which to be honest, is alright.

There aren’t many negative points to this game. There was one minor bug during a crash that kept restoring only to keep crashing in a loop. It was however kind of cool to watch, but not reproducible. Other than that, you will fatigue quickly from extreme concentration, because this game requires precision and skill. So perhaps after not succeeding after 30-40 minutes, your frustration level may rise and you may require a break. Some aspects of the game and unlock requirements may feel a bit repetitive and tedious, for example if you get left behind in a race, then it’s simply irrecoverable. Restart it. You will however be drawn back and your wins will be fist pump moments. Go play it.

This review was made possible by the Dangerous Driving team