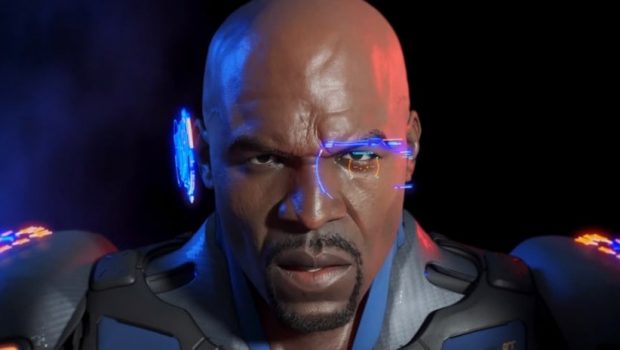 Summary: ‘Crackdown 3’ is everything you’d expect in a sequel. New location, new guns, new abilities, and a few hidden surprises along the way to keep you on your toes.

‘Crackdown 3’ is the latest addition to the cult classic Crackdown series. With 9 years between titles, Microsoft Studios has given Sumo Digital the task of bring new life into this beloved series. Veteran players will quickly find themselves deep in nostalgia as they once again take up the role of a genetically engineered crime fighting super soldier called an Agent. Director Goodwin, the head of ‘The Agency’, makes his return as the agent investigates the criminal activity of a mysterious corporate owned island city called New Providence. Allied with a local resistance group, the agent must regain their lost strength and uncover the truth behind a global terrorist attack known as ‘The Blackout’. 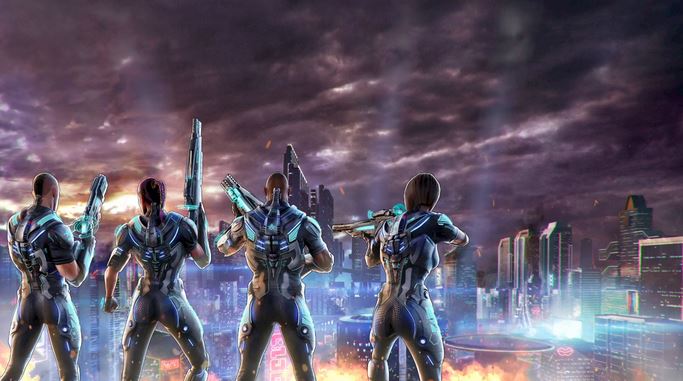 Growing up on the Xbox 360, I have fond memories of jumping over buildings, shooting bad guys, then picking up their corpses and throwing them at more bad guys. I quickly found this same nostalgia return in an instant as I eagerly watched the opening cinematic of ‘Crackdown 3’. A fire was lit once again, and the warmth of excitement pulsed through my veins as I picked up my first weapon. I was back. The agency needed me and I gladly answered the call. Anything to be given the chance to once again use a dead body as a thrown projectile to enforce order and justice!

‘Crackdown 3’ is a perfect example of sticking to what you know and not screwing it up. The game quickly brings back all of the elements that quickly made this series a cult classic. However, returning veterans to the crackdown series will quickly fell a strong sense of familiarity when playing this game. Where other developers would seek to experiment with new game mechanics to wow players, Sumo Digital did something far cleverer: they improved upon what already worked. In essence, ‘Crackdown 3’ is the Charazard we’ve all been waiting for ‘Crackdown One’ to evolve into. Sure, ‘Crackdown 2’ was a bit of a letdown with the whole zombie thing, but not anymore.

With the introduction of new element weapons and an array of uniquely diverse enemies ranging from robot henchmen to swarms of killer drones, ‘Crackdown 3’ has truly done justice on the 12 year old franchise. But, brutality aside, the most interesting thing about the game isn’t how it has grown, but rather, shrunk. Instead of going for vast open world like most sandbox games in recent years, ‘Crackdown 3’ has condensed its borders to a small group of closely connected islands. 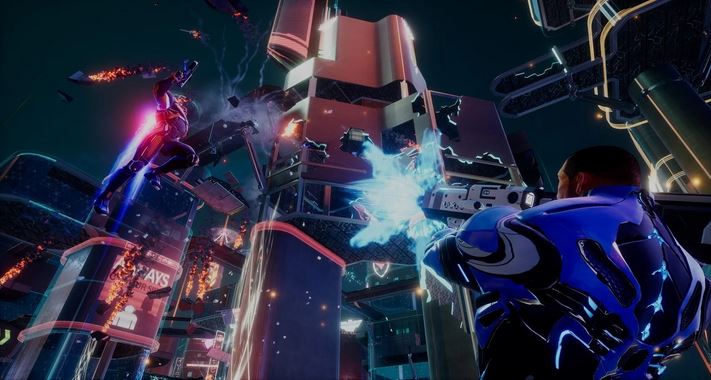 Those who played the previous tiles would remember how large and spread out the islands of Pacific City were, but this isn’t the case. New Providence is nothing short of a mega city, comprised of a dozen small islands within close proximity to one another. In all honesty, all of the islands in this game are quite literally within jumping distance of one another. “But what’s the trade off?” you might be asking? Why make such a small map? Well that’s the thing, I never said the map was small, only the islands where small. I never said anything about what’s on top of the island. As I said before, Crackdown 3 is situated in a mega city. Every inch of this New Providence is covered with rooftops, industrial pipe lines, high rise buildings, mono rail tracks, and the most overly complex and confusing network of highways and bridges I have ever encountered in my life. All of which are dying to be explored and climbed, allowing players to really get the full appreciation of their characters acrobatic abilities.

I previous titles, levelling up your jumping abilities were more of a means to an end by collecting the brightly coloured XP orbs scattered around the map. Players were forced to start off small, collecting orbs closer to the ground and slowly making their way higher as their abilities increased. As fun as this was in the beginning, it slowly became tedious and often forced players to revisit the same areas over and over again in order to max out their stats. However, the sheer diversity of terrain has now made this a more exciting endeavour. Orbs are now more assessable and the XP rewards are based on the difficulty to collect rather than how high off the ground they are. For example, an agent might be able to climb the tallest buildings in the game by traversing a series of strategically placed platforms on a side of a building. Once at the top of said building might be an XP orb offering 2 points for collecting. As it wasn’t a difficult climb thanks to the platforms, the player is only offered a small reward for their efforts. However, if you were to take on one of the many propaganda tower challenges where an agent must manoeuvre an obstacle course made up of a series of moving platforms to reach the off switch at the top, then they might incur one or several orbs offering 3 points each along the way. However, after successfully climbing to the top of the tower, an opportunity to collect an orb offering the maximum reward of 5 points might present itself. The only problem is that in order to collect the orb, the agent will need to jump off the top of the tower and successfully come into contact with the orb on the way down. Miss, and you’ll need to climb the tower all over again, thus the maximum reward for such a difficult challenge. But, as frustrating as that would sound, climbing a tower to reach a goal only to fall off and have to start again, it isn’t so much the case. 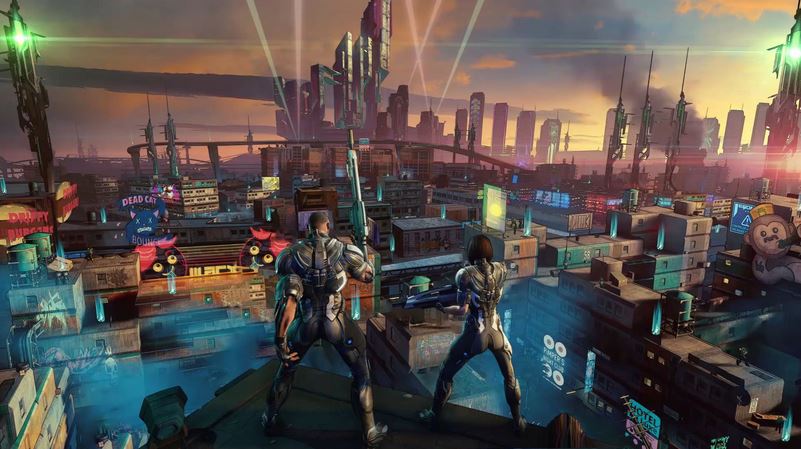 Along with all of their other brilliant ideas to build on what already works, ‘Crackdown 3’ now has a ‘restart’ option for particular challenges. Whilst taking on one of the many foot races, road races, or climbing challenges, players can now restart their current challenge with a push of a button on the controller. Instead of having to quit a challenge half way through and then walk back to the starting line, players can now restart whenever they want. In fact, I would say that the use of this feature is almost encouraged. I myself found this feature quite useful during a foot race over one of the more architecturally creative building in the game. Normally I’d given up after a few attempts due to fear of throwing my only Xbox controller into the TV and having to fork out $80 for a replacement. But thanks to this cleaver little feature I was able to eventually complete the race with no damage dealt to the TV, controller, or the wall had I missed. 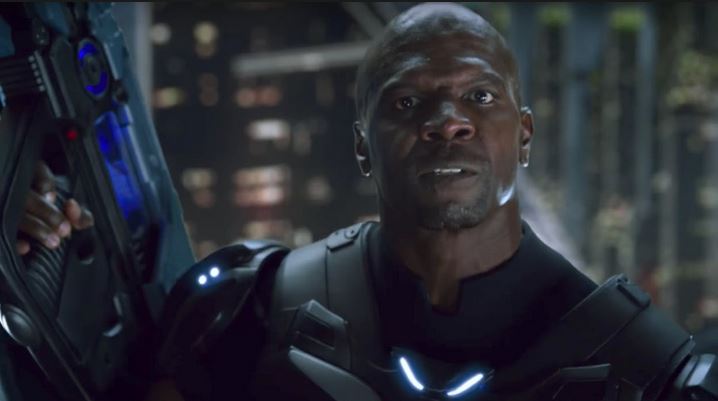 Now I know that I’ve focused a lot on what most of you would consider a very minute feature, and that’s the thing; It is a minute feature, yet it’s one of the most important as it really says a lot about the rest of the game. It is little features and details like this that really show you how much thought has gone into creating this game. When developers take time to actually think about what is going to make a game not only memorable but also fun and relaxing, it speaks volume about their reasoning for making the game. If a developer or publisher makes micro-transactions the easiest thing to access in the game, then is it not fair that they built the game as money grab? So the by that same logic, if a developer or publisher makes resetting challenges in order to make the game less frustrating, then it would be also fair to say that they made this game for the players. And that’s what games should be, a relaxing pass time for people to have fun and enjoy themselves. Something that Microsoft Studios and Sumo Digital have definitely achieved. 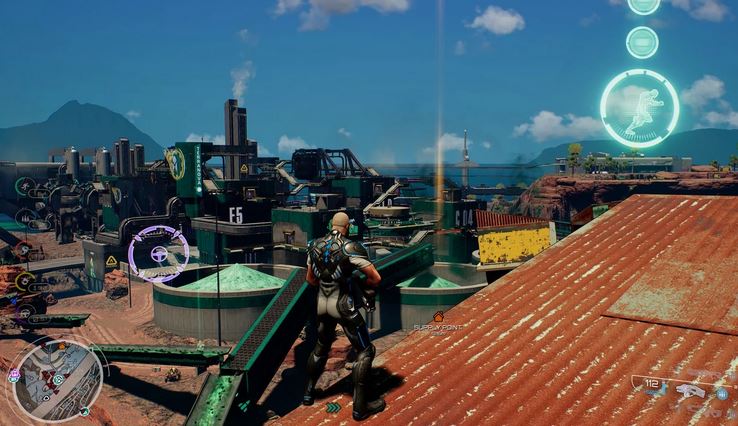 When I first started writing this review and analysing the game, I was asking myself, where are the story missions, where is the linear plot development? And I didn’t find any. Why? Because ‘Crackdown 3’ isn’t that sort of game. Yes, it still has a story, challenges, character development, and some really crazy side missions that involve blowing up giant barrels of Monkey Moonshine (yeah, you’ll get the joke when you play the game), but you’re not locked into anything. At any time, whether you’re wrecking a house, taking down an enemy stronghold or fighting a boss battle, you can walk away, just like that. All events and missions occur within the open world environment, meaning that you’re not caged into an arena or restricted area for the duration of the mission. Ergo, you’re free to do whatever you want, whenever you want. If you have commitment issues or just don’t feel like finishing what you started, then is the game for you. Even if you want to run back to base to grab some new guns, there is nothing stopping you. 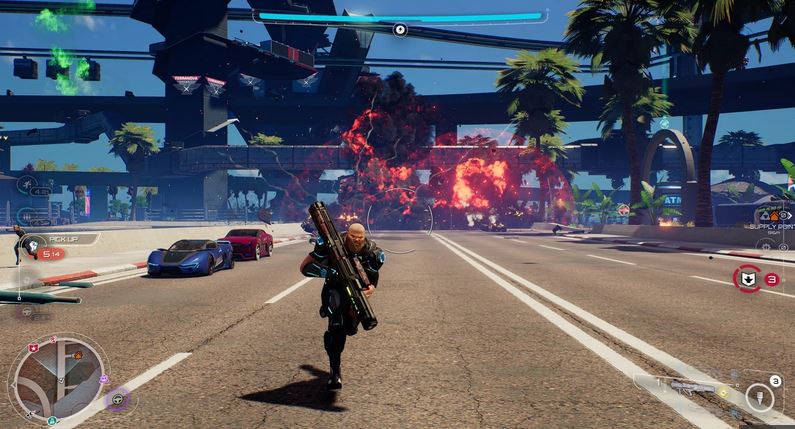 To date, ‘Crackdown 3’ is probably one of the most relaxing and fun games I have ever played. Unfortunately, I quickly retract that statement the moment I try to drive anywhere. In 12 years of developing the crackdown series, Microsoft Studios still haven’t been able to find someone who can make decent vehicle mechanics. Although not completely horrible, the new array of agency vehicles is not much to be desired. Once players reach the first tire of the driving abilities, they will unlock the ‘Delivery on Demand’ feature that lets them summon the agency’s new multipurpose, shape-changing vehicle. At any time, the agent may summon this vehicle to their current location, providing that it’s somewhere the car can reach. With a press of a button, a supper fast sports car will come rushing over to greet you like an energetic puppy greeting its master after a long day at work. And as both a dog and car lover, I step forward to great my new companion only to be ran over. You would think that by the 10th time this occurred I would have learnt to stand still and let the car come to me but foolishly enough, I am yet to learn my lesson. Perhaps I’m too used to summoning the horse from Assassins Creed, or maybe my car has more malicious intent than I. 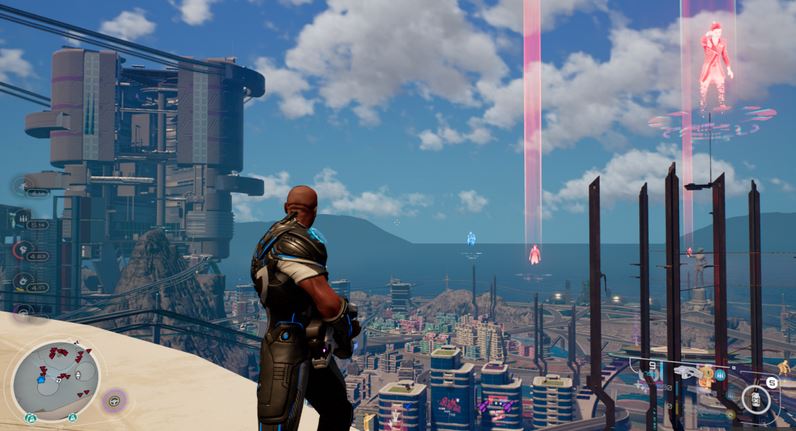 ‘Crackdown 3’ is everything you’d expect in a sequel. New location, new guns, new abilities, and a few hidden surprises along the way to keep you on your toes. Yet, the biggest draw card for the game is what it has been able to do with a limited number of new toys as opposed to completely reinventing itself from the ground up. The new elemental weapons and unique abilities have given players a more diverse approach to defeating their foes while still keeping in line with what the crackdown series is all about. The game walks and talks like a true addition the series and hopefully the beginning of a fresh new revamp. However, the language used in this game is not something previously seen in the first two titles. Clearly, this game has been developed for a more mature audience and not for younger kids like its predecessors. But, I wouldn’t put that down as an issue. I personally believe that this is a good and relaxing game for older gamers who want to unwind and enjoy a fast paced world that is also casual, either alone or with friends. ‘Crackdown 3’ is perfect for anyone who only has short amounts of time to spare or is looking for a game with lots of replay value. 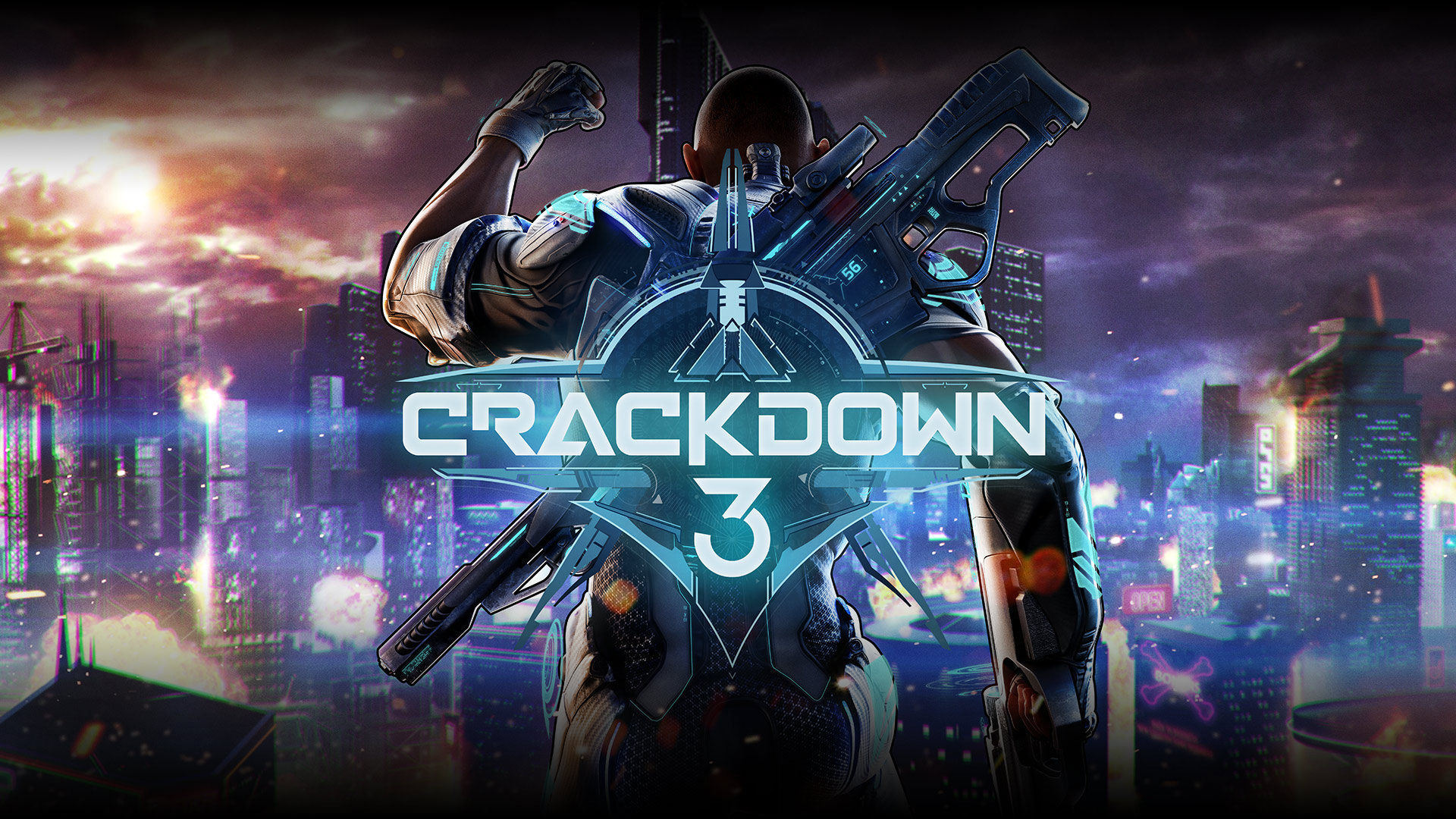