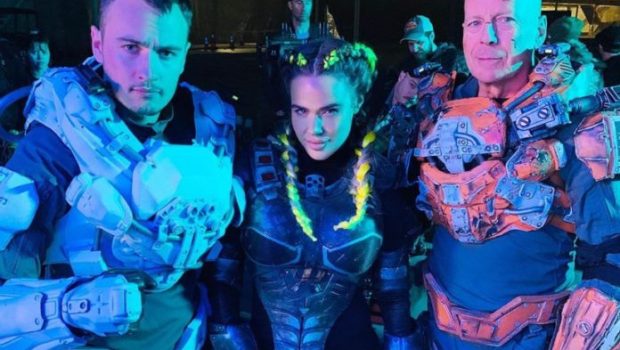 Summary: They should have called it SPACE HITLER IS BORING.

Some clumsy exposition at the start jumps 500 years into the future for no real reason just to dump some exposition. On a distant planet there is a first contact with an alien civilisation and the Alliance is called on to respond to it, very slowly.

This movie is so boring they just stand around in an industrial complex and say what is meant to be funny lines but they don’t land at all. Bruce Willis’ character is meant to be a war criminal and responsible for a genocide but the person in charge asks him before anyone else to help with the aliens.

Given this is meant to be set in the future their quarantine is really shit, they just let the aliens walk straight off the space ship and kill everyone. The supposed battle scenes don’t have any stakes in them at all as you don’t care about any of the characters enough to see if they live or die.

At one point a dude turns up in a normal t-shirt and jeans straight out of a Red Letter Media video.

I did enjoy Frank Grillo in Boss Level, but he just seems wasted here and is missing for a lot of the film’s running time. Bruce Willis just looks old and tired and should really just have a rest now.

It seems studios are dumping out all the garbage movies that should have been released last year but could not due to the pandemic.

Even the space stuff is boring and lazy and the aliens have no development to them at all. You never even get to find out why they want to attack and the film tries to push the line that genocide is a valid strategy.

There are plenty of space films or action films that you could watch that would be a much better use of your time.