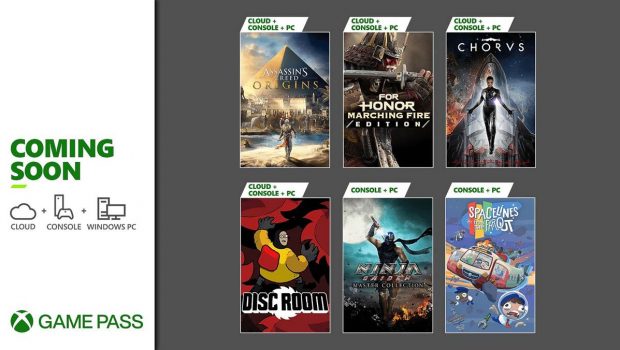 If you’re looking for some games to play while you wait for the Xbox & Bethesda Games Showcase coming up (subtle plug – 10 a.m. PT on June 12, tune in at twitch.com/xbox!), I may have one or two or six suggestions for you to choose from. If you want to explore the past, space, or being a ninja – which was everything I ever wanted in my childhood – we’ve got the games for you. Let’s take a peek at what’s coming in the next two weeks.

For Honor: Marching Fire Edition (Cloud, Console, and PC) – June 1
Dive into Arcade Mode, an endless PvE experience playable solo or with friends. Defend or attack a castle in Breach, a strategic 4v4 PvP mode. You’ll have access to unique, customizable Heroes across four factions, including the Wu Lin faction, giving you even more choices in how to take to the battlefield!

Ninja Gaiden: Master Collection (Console and PC) – June 2
Enjoy three games from the Ninja Gaiden series in this one title. All of the previously released game modes and DLC costumes for each title are included in this one set. In addition to Ryu Hayabusa, each of the other characters also have many different costumes to choose from, allowing you to enjoy action packed battles in whichever outfit you prefer.

Chorus (Cloud, Console, and PC) ID@Xbox – June 7
Take control of Nara on a quest to destroy the dark cult that created her. Unlock devastating weapons & mind-bending abilities in this evolution of the space-combat shooter. Along with Forsaken, her sentient starfighter, explore ancient temples, engage in zero-g combat and venture beyond waking reality.

Disc Room (Cloud, Console, and PC) ID@Xbox – June 7
The year is 2089 and a giant disc has appeared in orbit of Jupiter. Step into the oversized space suit of a brave scientist and explore this sprawling intergalactic slaughterhouse. Don’t be afraid to die a little, your next run is just a button press away.

Spacelines from the Far Out (Console and PC) ID@Xbox – June 7
Available on day one with Game Pass: Spacelines from the Far Out is a ‘roguelike-like’ co-op management game about airlines in space, featuring unlockable spaceships, upgrades, characters and customizations, randomly-generated challenges, trips and itineraries, with a generous serving of 60s space-age flair and jazz!

Ubisoft Games in the Xbox App for PC

Since the launch of Rainbow Six: Extraction and Rainbow Six: Siege with PC Game Pass earlier this year, we have made improvements to the Xbox app on PC to make it easier to search for and install Ubisoft games via Ubisoft Connect. That means you’ll be able to search, install, and jump right into For Honor: Marching Fire Edition and Assassin’s Creed Origins when they are added to the PC library.

For more information on accessing Ubisoft games with PC Game Pass or to get a head start on connecting your Game Pass account with Ubisoft Connect, visit Ubisoft’s Help page to learn more.

Age of Empires III: Definitive Edition – Knights of the Mediterranean DLC – Available now
Game Pass members save up to 10%! Experience the Italy and Malta civilizations in Age of Empires III: Definitive Edition, including the brand new, casual friendly Tycoon Game Mode, and the first ever set of Historical Maps, which bring endless replayability with a historical twist. Learn more here.

No Man’s Sky: Leviathan Expedition – Available now
The 7th No Man’s Sky expedition, Leviathan, finds Travellers trapped in a time-loop curse suspected to trace back to a near-mythical space creature. Join the community effort to help recover memory fragments, lost remnants of previous loops, and liberate the universe in this unique rogue-like survival adventure. Jam-packed with rewards, including the WhaleStalker Cloak, Temporal Starship Trail and, the ultimate prize, the Leviathan itself, an imposing living frigate to add to your fleet. Learn more here.

Sea of Thieves: Lost Sands Adventure – Available until June 9
Restoration or ruin – you decide! Side with either Merrick or the Servant of the Flame to determine the future of Golden Sands Outpost in ‘Lost Sands’, Sea of Thieves’ fourth time-limited Adventure running from May 26 to June 9! Learn more here.

Assassin’s Creed Origins: Deluxe Pack – June 7
Upgrade your game experience with the Deluxe Pack as you discover the origins of the Assassin’s Brotherhood. The Deluxe Pack includes: The Ambush at Sea mission, The Desert Cobra pack (including one outfit, two legendary weapons, one legendary shield, and one mount) and three Ability points.

The following games are leaving the Game Pass library soon. As always, this is your time to show them some love before they go! Remember, this doesn’t have to be goodbye as you can save up to 20% on your purchase to keep them in your library!

We’re not done for June, so keep an eye on The Wire or PC and Xbox Game Pass Twitter and Instagram for more games, more release dates, and possibly a few surprises now and again. We’ll see you on June 12 for the Xbox & Bethesda Games Showcase, and back here soon! Cheers!