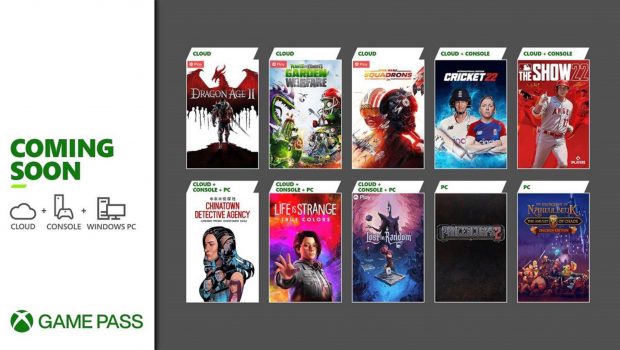 Overnight, Microsoft announced the latest wave of titles set to arrive on Xbox Game Pass for Console, Cloud and PC libraries over the next few weeks, including:

For more information,check out the official release below from Xbox:

I know you’re probably thinking about games and honestly, I’m right there with you. We’ve got a round-up of all of the games available today and coming soon, in addition to some surprise game drops you might have missed since our last announcement (check the ICYMI section!). Let’s jump in!

Cricket22 (Cloud and Console) ID@Xbox
Step on to the field for the most comprehensive cricket game ever! With more licenses, a narrative-driven career mode, and 4K visuals, Cricket 22 is a true next-generation sporting experience. All-new control options make the game more accessible to players of all skill levels, while Big Ant Studios’ authentic recreation of every aspect of the sport provides hundreds of hours of hyper-realistic cricket action for fans. Lead your team to glory, your way!

MLB The Show 22 (Cloud and Console)
Available on day one with Xbox Game Pass: Experience faster, deeper and more intense moment-to-moment match action on the field, with a variety of game modes for all you rookie players and returning seasoned vets. Every pitch. Every hit. Every win. Make your mark and Own The Show in MLB The Show 22.

Dragon Age 2 (Cloud) EA Play – April 7
Experience the epic sequel to the critically acclaimed Dragon Age: Origins. You are one of the few who escaped the destruction of your home. Now, forced to fight for survival in an ever-changing world, you must gather the deadliest of allies, amass fame and fortune, and seal your place in history. This is the story of how the world changed forever. The legend of your Rise to Power begins soon with cloud gaming via EA Play.

Star Wars: Squadrons (Cloud) EA Play – April 7
The New Republic fights for freedom. The Empire demands order. The Galactic Civil War is at a tipping point in a time where ace pilots on both sides could make all the difference. Master the art of starfighter combat in Star Wars: Squadrons with cloud gaming via EA Play.

Panzer Corps 2 (PC) ID@Xbox – April 12
Panzer Corps 2 is the ultimate strategy game! Enjoy the time-proven gameplay formula which has been appreciated by millions of players over the years, brought to a whole new level of refinement up to the latest technical standards.

The Dungeon of Naheulbeuk (PC) ID@Xbox – April 12
Available now on Cloud and Console, and coming soon to PC Game Pass, step into the wacky heroic fantasy universe of the Dungeon of Naheulbeuk. Lead a team of unlikely and clumsy heroes in an epic and challenging tactical RPG. Live an adventure filled with humour, surprises and silly encounters.

Lost In Random (Cloud, Console, and PC) EA Play – April 14
Play the odds in Lost in Random, a gothic fairytale-inspired action-adventure where every citizen’s fate is determined by the roll of a dice. PC Game Pass & Ultimate members start their journey with EA Play on April 14.

A Memoir Blue (Cloud, Console, and PC) ID@Xbox – Available now
A song from years ago triggers a flood of memories for champion swimmer Miriam. Embark on an evocative journey through her turbulent childhood and the complicated relationship she shared with her devoted mother.

Crusader Kings III (Cloud) ID@Xbox – Available now
Live the life of a medieval ruler in Paradox Development Studio’s award-winning strategy role-playing game, Crusader Kings III! Assume the leadership of a medieval noble family, increasing its power and reputation through the generations. As one ruler dies, they are replaced by an heir who may have very different abilities or interests, forcing you to adjust your long-term plans.

Kraken Academy!! (Cloud, Console, and PC) ID@Xbox – Available now
Make friends, free spirits and make sure that the world doesn’t end! Welcome to Kraken Academy, a technicolor fever dream that for legal reasons can only be described as “technically a school.” Join forces with a magical kraken to manipulate a time loop and save the world.

Paradise Killer (Cloud, Console, and PC) ID@Xbox – Available now
Paradise Island, a world outside reality. There’s been a murder that only “investigation freak” Lady Love Dies can solve. Gather evidence and interrogate suspects in this open world adventure. You can accuse anyone, but you’ll have to prove your case in trial. It’s up to you to decide who’s guilty.

Super Mega Baseball 3 (Cloud and PC) EA Play – Available now
Run up the score in a relaxed slugfest or push the limits of your reflexes in this refined baseball simulator that’s perfect for rookies and pros alike. The third entry in the series features all-new Franchise, Online Leagues and Practice modes, plus improved graphics and on-field additions!

Microsoft Flight Simulator: World Update VIII – Available now
Explore coastal nooks of the Mediterranean and Atlantic, the heights of the Pyrenees, and the legendary architecture of Lisbon and Madrid with World Update VIII: Spain, Portugal, Gibraltar, and Andorra. This beautiful region has been enhanced with a variety of new, high resolution geographic improvements, including elevation data, photogrammetry, and aerial imagery.

Sea of Thieves: Legends Week – Available until April 11
Celebrate all things Pirate Legend in Sea of Thieves’ Legends Week event, running until April 11 with celebrations, in-game promotions and a sneak peek at the upcoming Legend of the Veil Voyage. Come together and raise a tankard to more than a million players who have now reached this milestone!

Start watching and enjoy the Original Series “Halo” on us! Go claim your Perks now by heading to the Perks gallery on your Xbox console, Windows PC, or Xbox Game Pass mobile app.

The following games are leaving the Game Pass library soon, so grab your mobile device, hop on your console or get your keyboard and mouse warmed up to play these before they go. If you want to keep these games in your library, be sure to use your member discount to save up to 20% on games available to purchase!

I think we can check “games” off the list for now, but of course I would recommend you follow us on Twitter at @XboxGamePassPC and @XboxGamePass for more updates. Stay tuned for more games later this month!