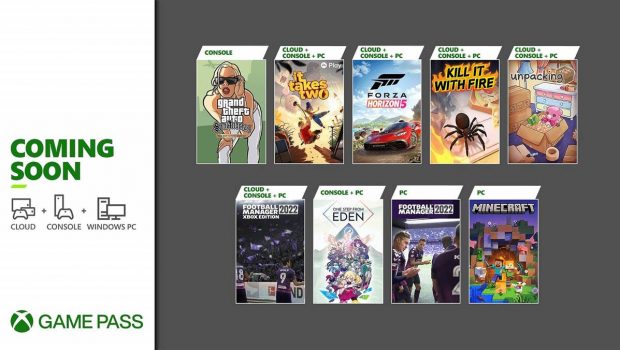 Overnight, Microsoft announced the latest wave of inbound titles to arrive on Xbox Game Pass for Console, Cloud and PC libraries, including:

We’re continuing the trend of bringing back-to-back blockbuster games to Xbox Game Pass and I’m absolutely here for it. I’m trying to contain my hype and not type in all capital letters but imagine me writing announcement this very loudly with pure excitement with each game coming soon.

If you haven’t tried Game Pass on Windows PC, now is the best time to join and check it out. Starting November 2, new Xbox Game Pass for PC members can get 3 months for just $1. This means you can play Age of Empires IV, Minecraft (both Bedrock and Java editions starting tomorrow), Forza Horizon 5, and Halo Infinite when they launch, and more on your PC this holiday season for just $1.

Minecraft: Java and Bedrock Editions (PC) – November 2
Get your computer ready because Minecraft is coming to Game Pass for PC! Play Minecraft: Java Edition and Minecraft: Bedrock Edition on Windows 10 and 11 as part of your Xbox Game Pass for PC or Ultimate membership. That also means you can conveniently cross-play with any current Minecraft version, including consoles and mobile! Just launch the same edition as the Minecrafter you want to play with. No need to pick and choose — experience Minecraft on PC in one launcher with Game Pass.

Unpacking (Cloud, Console, and PC) ID@Xbox – November 2
Available day one with Xbox Game Pass: Moving day is here! Unpack like never before in this zen puzzle game where you’ll learn about a character through a variety of moves. Unpacking weaves together a story through the everyday and sentimental belongings you’ll encounter as you decorate and organize each new space throughout the game.

It Takes Two (Cloud, Console, PC) EA Play – November 4
Go on a wild co-op adventure with EA Play as It Takes Two joins Xbox Game Pass for PC & Ultimate via The Play List. Discover a metaphorical merging of gameplay and narrative in a light-hearted story of the hardships in getting along. And you can invite a friend to join the adventure with Friend’s Pass!

Kill It with Fire (Cloud, Console, and PC) ID@Xbox – November 4
Kill It with Fire is a first-person action game about hunting spiders and causing collateral damage. Assemble your arsenal of increasingly excessive weapons, track spiders across suburbia, and burn everything in your path!

Football Manager 2022: Xbox Edition (Cloud, Console, and PC) – November 9
Available day one with Xbox Game Pass: Navigate your way to the top of the footballing world as the boss of the world’s greatest football teams in a tailored version of Football Manager that’s been adapted for console play on the biggest stage. Build your dream squad and make the club completely your own as you develop your career to become a managerial great. Plus, Ultimate members can play with Cloud Gaming featuring Xbox touch controls on day one, no controller needed!

Forza Horizon 5 (Cloud, Console, and PC) – November 9
Available day one with Xbox Game Pass: Your Ultimate Horizon Adventure awaits! Explore the vibrant and ever-evolving open world landscapes of Mexico with limitless, fun driving action in hundreds of the world’s greatest cars. Lead breathtaking expeditions across a world of striking contrast and beauty while immersing yourself in a deep campaign with hundreds of challenges that reward you for engaging in the activities you love

One Step from Eden (Console and PC) ID@Xbox – November 11
One Step from Eden combines deck-building and real-time action with rogue-like elements, giving you the chance to carve a path of mercy or destruction. Fight alone or with a friend in co-op as you cast powerful spells on the fly, battle evolving enemies, and collect game-changing artifacts. Can you make it to Eden?

Backbone (Cloud) ID@Xbox – Available now
Raccoon detective Howard Lotor is not a hero. He can barely make rent. And yet he has stumbled across something so massive that it will shake the very fabric of society. Stunning visuals, an evocative soundtrack, and a daring narrative bring a dystopian Vancouver, BC inhabited by animals to life in this highly anticipated, postnoir adventure. Get to it, detective.

Project Wingman (Cloud and Console) – Available now
In an immersive flight experience, you’ll dogfight, strike, and fly your way to conquering the skies. Strap yourself into the cockpit of over 20 unique aircraft and become a true ace in Project Wingman

Doom Eternal: Horde Mode and Update 6.66 – Available now
Free to all players! Experience the all-new Horde Mode, compete in the upgraded Battlemode 2.0 multiplayer, put your skills to the test with two all-new Master Levels, earn new skins for the Doom Slayer and demons, and more.

Forza Horizon 5 Premium Add-Ons Bundle – Pre-order now
Get early access and all the extra content included with the Premium Edition at one low price! The Forza Horizon 5 Premium Add-Ons Bundle allows you to play four days early beginning November 5, 2021. It also includes the Welcome Pack, Car Pass, VIP Membership and two game expansions when they become available. Plus, Xbox Game Pass members save up to 10%!

Battlefield 2042 Early Access Trial with EA Play – November 12
Game Pass for PC and Ultimate members can plunge into the near-future, all-out war of Battlefield 2042 first on November 12 with EA Play. Fight in military battles of unprecedented scale for 10 full hours, days before release. Plus, save 10% on pre-orders with your member discount and unlock exclusive rewards.

Play, Share, and Discuss in the Xbox Game Club
The Xbox Game Club features a Game Pass game each week for members to play, share, and discuss. It’s like a book club… but for games! Play and connect with others through a shared love of gaming in the official club Discord at discord.gg/XboxGameClub.

Claim the Perks below via the Perks gallery on your Xbox console, Xbox app for Windows PCs, or Xbox Game Pass mobile app.

Quick reminder: We have extended the availability to claim your Disney+ 30-day trial* through January 31, 2022. So, if you haven’t already, go claim your Perk to enjoy an unprecedented collection of the world’s most beloved movies and TV series from Disney, Pixar, Marvel, Star Wars, and National Geographic through the holiday season. Enjoy!

Well now I need to figure out what my schedule looks like over the next couple of weeks to play all of these games. While you’re planning your gaming schedule, be sure to follow us at @XboxGamePassPC and @XboxGamePass for heads up when these games are available. Plus, our Xbox Game Pass mobile app has you covered for quick access to the install button while you’re away. See you next time!

*Introductory offer available to new subscribers only. After promotional period, subscription continues at regular monthly price unless cancelled. Not available in Turkey, India, and Russia.