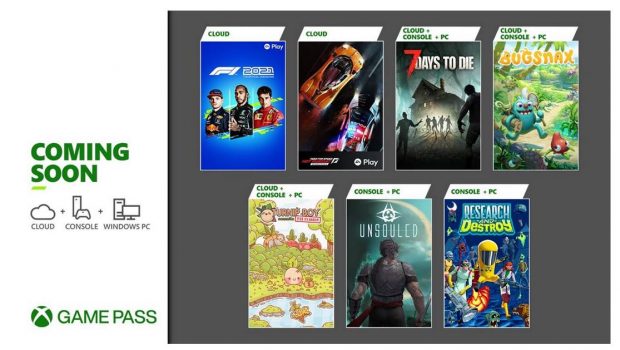 Overnight, Microsoft announced the latest wave of titles set to arrive on Xbox Game Pass for Console, Cloud and PC libraries over the next few weeks. Additionally, Xbox is working with Ubisoft to bring even more incredible games to Xbox Game Pass, with Assassin’s Creed Origins and For Honor: Marching Fire Edition in the next two months. Upcoming additions include:

I’m happy to report that more games are coming to Game Pass (please share your favourite shocked face meme). We’ve got you covered on all the games you can play soon, updates for ones you’re probably already playing, and more cloud enabled games with Touch Controls. There are more games on the horizon we’ll give you a sneak peek into, so let’s dive in!

I’m excited to share that we’re working with Ubisoft to bring even more incredible games to the Game Pass library! In the next two months, Assassin’s Creed Origins will join the library for cloud, console, and PC via Ubisoft Connect app. We will also bring For Honor: Marching Fire Edition to PC via Ubisoft Connect app, and upgrade to the Marching Fire Edition for cloud and console.

F1 2021 (Cloud) EA Play
It’s lights out and away we go! Game Pass Ultimate members can experience a gripping F1 story with cloud gaming via EA Play. Hit the track with their own team and live every Formula 1 fan’s ultimate fantasy as F1 2021 joins a collection of racing games available to play on EA Play.

Need for Speed Hot Pursuit Remastered (Cloud) EA Play
Feel the thrill of the chase and the rush of escape in Need for Speed Hot Pursuit Remastered, now available with cloud gaming via EA Play. Unleash a savage sense of speed both as an outlaw and a cop in the world’s hottest high-performance cars. Outsmart the heat or take down lawbreakers with the tactical weaponry at your disposal in a heart-pumping, socially competitive racing experience. It’s time to reignite the pursuit.

Turnip Boy Commits Tax Evasion (Cloud, Console, and PC) ID@Xbox
Take control of the titular turnip seeking a way to pay back his debts to a corrupt onion mayor. Featuring a blend of puzzle solving, dungeon exploring, and plant harvesting, Turnip Boy Commits Tax Evasion is a cute, but epic journey to avoid paying taxes and tear down the establishment.

Research and Destroy (Console and PC) – April 26
Available on day one with Game Pass: Take control of three brilliant Super Scientists in this turn-based action game as you research and develop strange new weapons and gadgets to destroy the Supernatural hordes that have all but crushed humanity!

Bugsnax (Cloud, Console, and PC) ID@Xbox – April 28
Bugsnax takes you on a journey to Snaktooth Island, home of the legendary half-bug half-snack creatures, Bugsnax. Invited by intrepid explorer Elizabert Megafig, you arrive to discover your host nowhere to be found, her camp in shambles, and her followers scattered across the island alone… and hungry!

Unsouled (Console and PC) ID@Xbox – April 28
Available on day one with Game Pass: Test your reflexes to the limit and land uber-satisfying combos in Unsouled, a punishingly difficult (yet fair) Action RPG. During the journey, you’ll have to master the ability to execute various skill combos and counterattacks for maximum damage if you hope to survive.

Ark: Survival Evolved Eggcellent Adventure – Available through April 25
Eggcellent Adventure returns for the 7th year! Available now through April 25, follow the trails of wild Bunny Dodo’s and Bunny Oviraptor’s to gather Bunny Eggs for special event loot. Place down Bunny Eggs to paint on them, or use them in a Crafting Pot to craft special holiday-themed cosmetics including 5 new chibi’s and a full-body bunny suit costume!

Sea of Thieves: The Shrouded Deep – Available April 21 through May 12
Summon the Megalodon! Hunt down a pale beast from the depths of legend to help Belle and the Pirate Lord find the Veil of the Ancients – all in ‘The Shrouded Deep’, Sea of Thieves‘ third time-limited Adventure running from April 21 – May 12!

Minecraft Dungeons: Luminous Night (Seasonal Adventure, Season 2) – Available on April 20
Become the avatar once more and earn new radiant rewards in Luminous Night – Minecraft Dungeons’ second seasonal adventure. Explore the Tower by night in a whole new light, with floors that include mysterious murals, perplexing puzzles, and fiery foes. New challenges and quality -of-life features await you – what will you discover before daybreak? Learn more about this new adventure here.

MLB The Show 22: Launch Bundle – Available now
MLB The Show is back on Xbox Game Pass. Kickstart a new year of MLB The Show 22 with 10 The Show Packs to build out your Diamond Dynasty. Once acquired, items should be redeemed upon booting the game. Information on items redeemed should be listed in your Profile mail inbox.

The following games will be leaving the Game Pass library soon, so be sure to carve out some time out of your gaming schedule to play before they leave! Remember to use your member discount to save up to 20% to keep these in your library.

That’s a wrap for April! I’m going to watch some clean-tok videos and see if they have tips for cleaning up my backlog. In the meantime, stay tuned for updates on Twitter at @XboxGamePassPC and @XboxGamePass. Catch you next time!