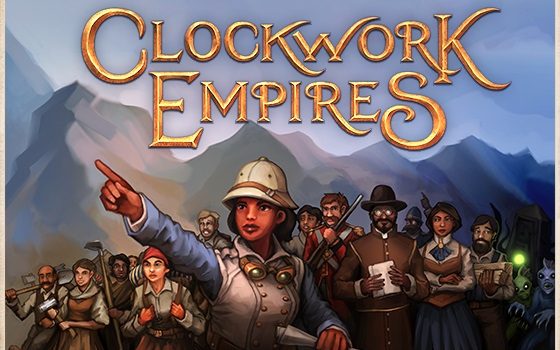 Summary: Clockwork Empires is a solid and fun idea, but one too buggy and flawed for prime time.

Let’s just say the review process for Clockwork Empires didn’t begin on the best of footing. To explain, learning curve is so substantially high, it required a half dozen scenario restarts to simply make sense of success or failure. This was accompanied by an array of play through videos in hopes of grasping developer intent.

Over time, the game did, in fact, begin to make a great deal more sense. A bunch of colonists are dropped into an uninhabited region, instructed by the glorious empire to make a new life from the world around them. Overseers, assisted by laborers, collect and forage natural resources toward building impromptu villages and survival mechanisms. Good strategy yields even more settlers and supplies. Of course, no community operates in isolation. Be it fish people or neighboring villages, there’s always someone or something on standby serving as potential friend or foe.

The biggest issue with Clockwork Empires is its constant identity struggle. On one hand, it aspires to be a robust, Lovecraftian micro-management village construction simulator bursting at the seams with individual overseer and laborer personality. There are moments when the robustness of the simulation truly does click, and they’re awesome. Laborers are maximizing resources, overseers operating building mechanisms, and personality quirks satiated through solid decision making. 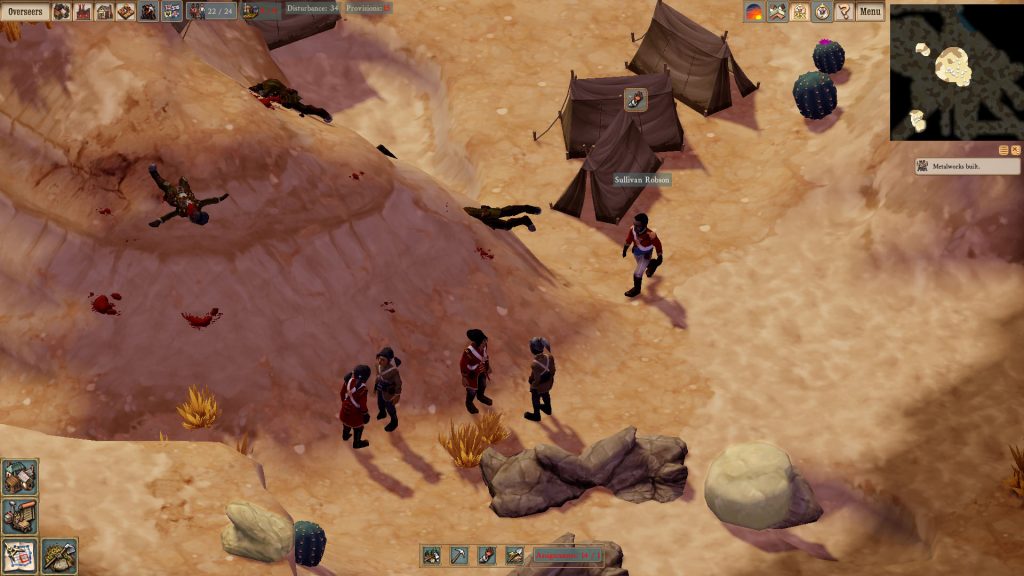 On the other end, Clockwork Empires simultaneously aspires to be a more simplified, clever storytelling-based critique of society. Menus are intentionally dumbed down to allow quicker decision making, game mechanics on seeming auto-pilot to literally allow a player to simply watch things unfold. Its homage to simultaneous Lovecraft and steampunk is simply awesome.

The problem is, Clockwork Empires accomplishes neither. The simulator notion is far too convoluted to produce that Civilization-esque feeling of God-like control. Similarly, the would-be storylines devolve from engaging to confusing randomness. What should be entertaining ends up head scratching chaos.

Perhaps the most damning criticism is the game’s glaring need for further bug testing. Crashes galore hampered my experience, as did an incredibly irritating tendency for menus to simply disappear out of selectable range. Sometimes this was corrected via a game restart…other times, not at all. This is inexcusable, as it renders the game unplayable.

Per above, gameplay ingredients are there, but Clockwork Empires is a dish both missing spice and served a bit cold. Menus fail to logically branch into another, and the provided tutorial simply doesn’t connect the dots well enough to make sense of it all. Why do people build houses only to get trapped inside them? I understand the dynamic, but it’s simply moronic.

Moreover, laborers tend to both wander and anger for the weirdest of reasons. One minute, a laborer is thrilled, chopping wood to her heart’s content. The next she demands a drink and refuses to work, period. Then all is right in the world again. Then she’s dead from starvation. 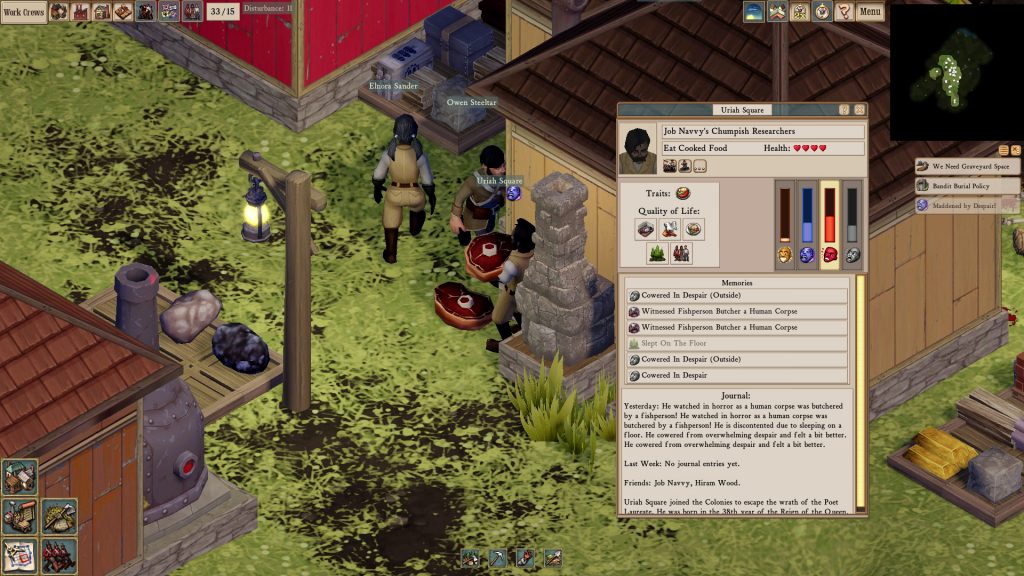 Referencing the above, Clockwork Empires fails to logically stagger village evolution. It encourages building workshops and bars before beds. Also – and even with a place to properly store resources – villagers require multiple steps to simply stack and transport items to where they need to be.

User interface is likewise terrible. More often than not, tasks are incorrectly assigned thanks to poor task transitions. What results is continual backtracking via task assignment menus to guess and undo unwanted actions to free villagers to accomplish desired functions. Clockwork Empires is screaming for an omnipresent task prioritization graphic to highlight who’s doing what, why, and for how long.

Related, don’t get me started on how difficult it is to highlight a specific item on screen. It almost never works. Lots of trial and error in selecting…closing the menu associated with said item/person…trying again, and again until the desired item is finally selected.

Finally, foraging simply makes no sense. In some regions – even at easiest levels – there’s simply nothing there to gather. Shouldn’t I be able to forage cacti in the desert? 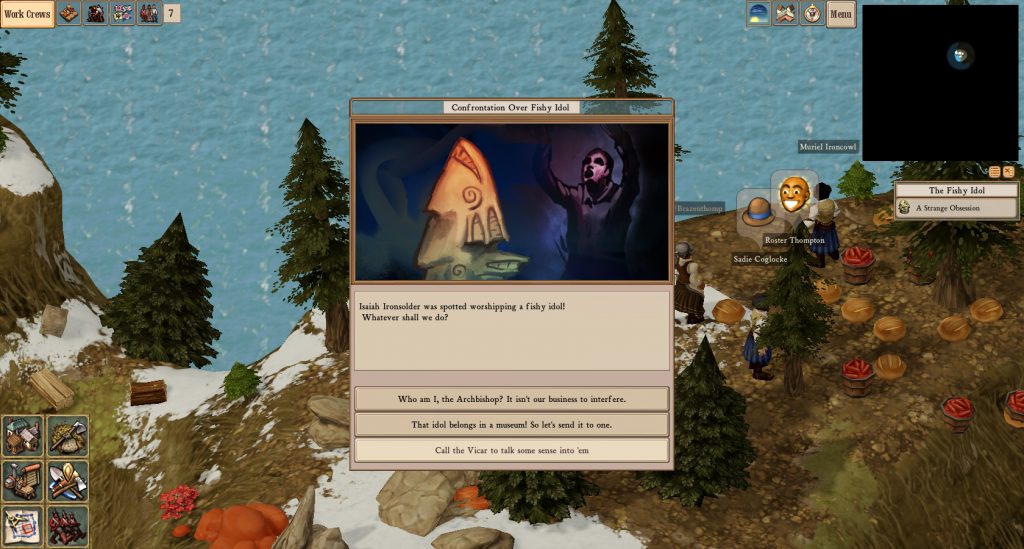 Clockwork Empires isn’t setting the world on fire visually, but I admittedly like its look and feel. Character and environmental are appropriate for this type of game, making them easy to spot. The whimsical artwork style works.

If there’s a criticism, it lies on the modules once places inside buildings. They’re near-impossible to discern appropriate placement direction, also the logic in why they should go said way. Menu buttons – while gameplay troublesome – are nicely articulated.

Simple but fun music throughout. Nice retro feel, and a bit catchy in tandem. Guilty as charged in humming tunes!

In its current buggy and flawed state, it’s hard to recommend Clockwork Empires at full $30 price. The title shows a lot of promise, and – despite early struggles – I grew to appreciate its brave approach and dynamics. Even with a constant need to restart village scenarios, the game was definitely fun. I cannot, however, endorse a title near-impossible to interface with and/or complete.

Clockwork Empires is an interesting premise heavily weighed down by its unfinished feel. Too many bugs, crashes, and unintuitive gameplay options make it hard to recommend in its current state. If all the glitches are ironed out, I’m eager to see what emerges.

Paul Stuart’s ten years plus of game reviews can be found in Collider, Extreme Gamer, That Aussie Game Site, and Game Critics, and recently found a new place to call home here at Impulse Gamer. An unabashed solo gamer by preference, he has an unhealthy obsession with all things Street Fighter, God of War, and Assassin’s Creed. In his spare time, he’s a dedicated Muay Thai practitioner, vintage sports card collector and friend to animals with facial hair.