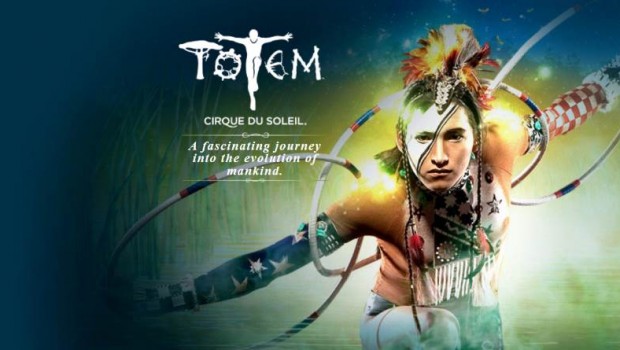 Summary: Totem is a true celebration of not just the evolution of humanity but the amazing acrobatics and skills of the brilliant performers of Cirque Du Soleil

Montreal’s illustrious Cirque du Soleil returned to Melbourne last night in a truly extravagant and spectacular opening as they launched their new show, Totem. As their performers went above and beyond that most of us would consider the limitations of the human body, these ultimate circus performers created a very impressive show that was filled with everything you would expect from the world’s most famous circus troupe that included acrobats, trapeze, unicycles and humour. As with other Cirque du Soleil shows, it must be seen to believed! 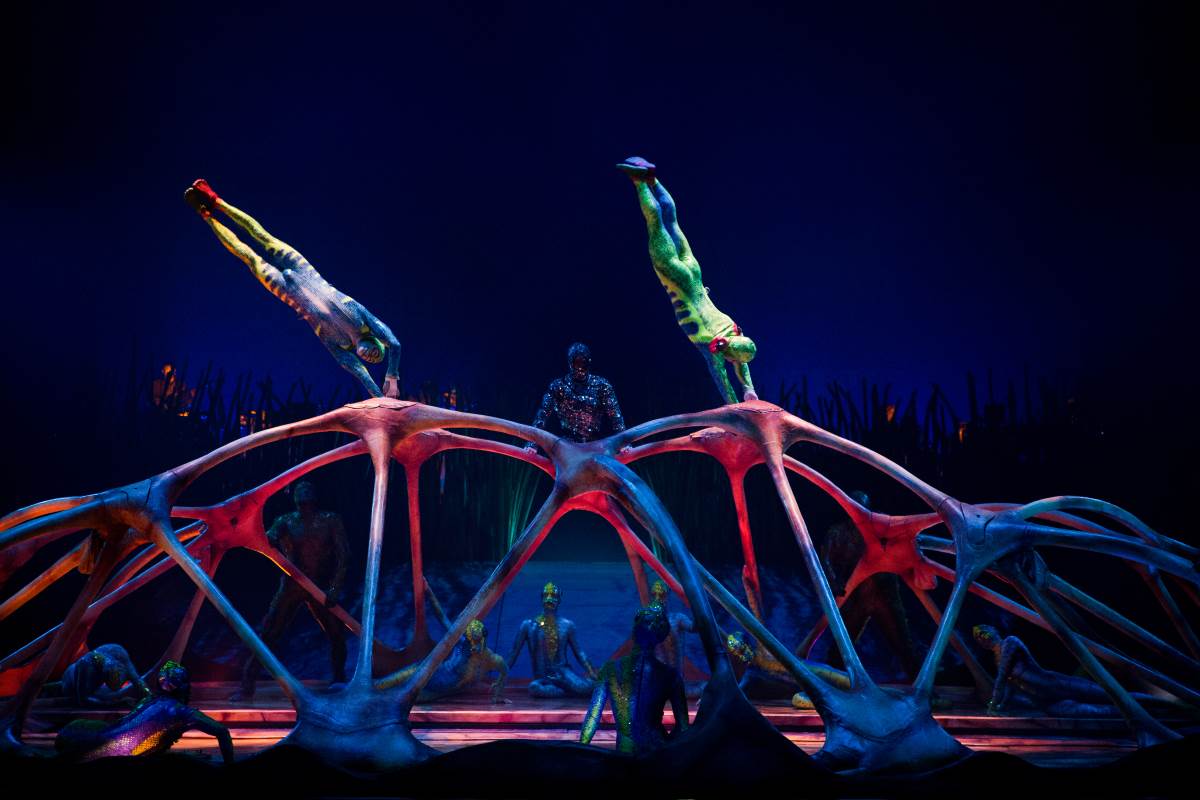 However like the previous Cirque du Soleil tours of Australia that have included Ovo and Michael Jackson The Immortal World Tour, Totem has its own theme which revolves around the evolution of mankind from its primordial beginning to cave men, a Charles Darwin type scientist and even space travel. Totem is best described a celebration of this journey that uses bright visuals, exuberant costumes and an acrobat language that has been perfected by Cirque du Soleil to create some “real” world magic and several wow moments. 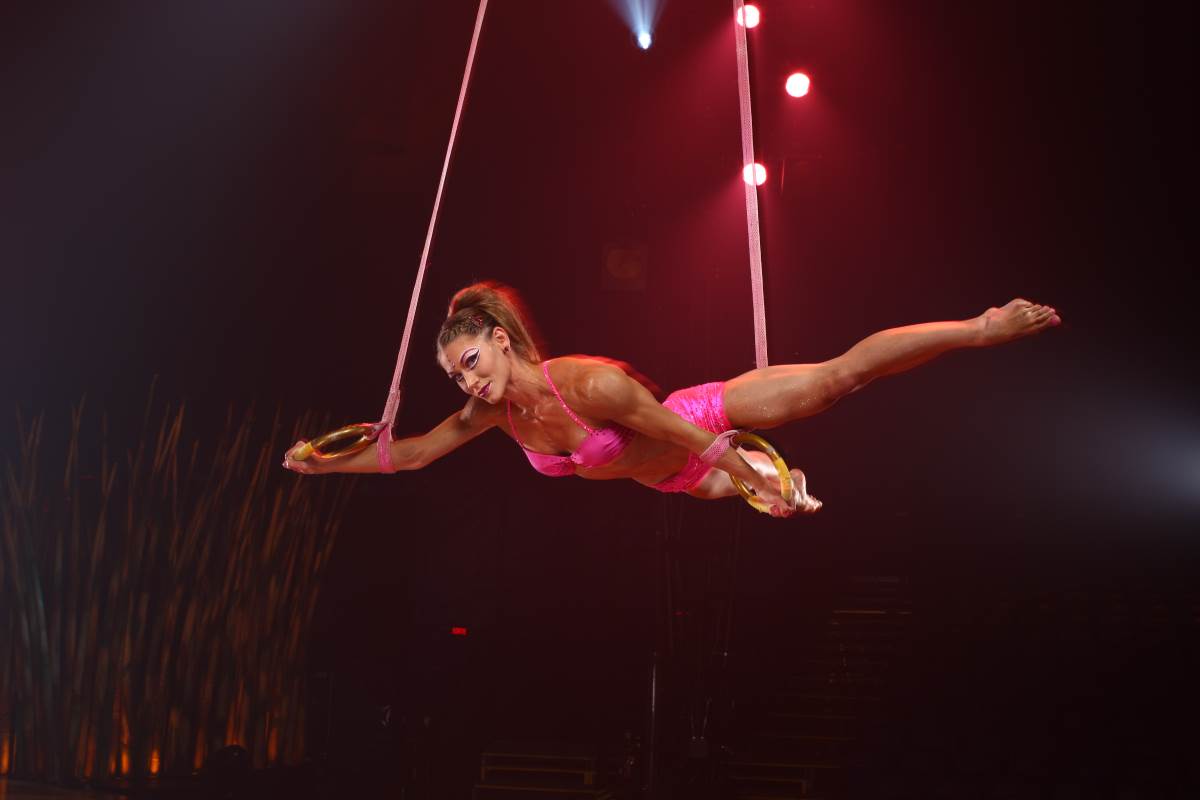 The opening act (Carapace) features a giant turtle-like skeleton with two main parallel bars as five performers dazzle the audience in not just their costumes but their acrobatics as they twirl, fly and spin around this structure in perfect timing. Seeing the two main artists in tandem performing some exceptional routines as they move between the bars together is true perfection at its best.

Following this, we have Eric Hernandez dressed as a Native American while he performs this amazing hoop dance as the powerful tribal music booms in the background which really sets the scene of things to come. The humour in Totem is performed by two main characters that include an Italian tourist called Valentino (Jon Monastero) and a rather depressed looking clown (Philippe Thibaudeau) who create this very amusing water skiing act that eventually leads them to outer space. 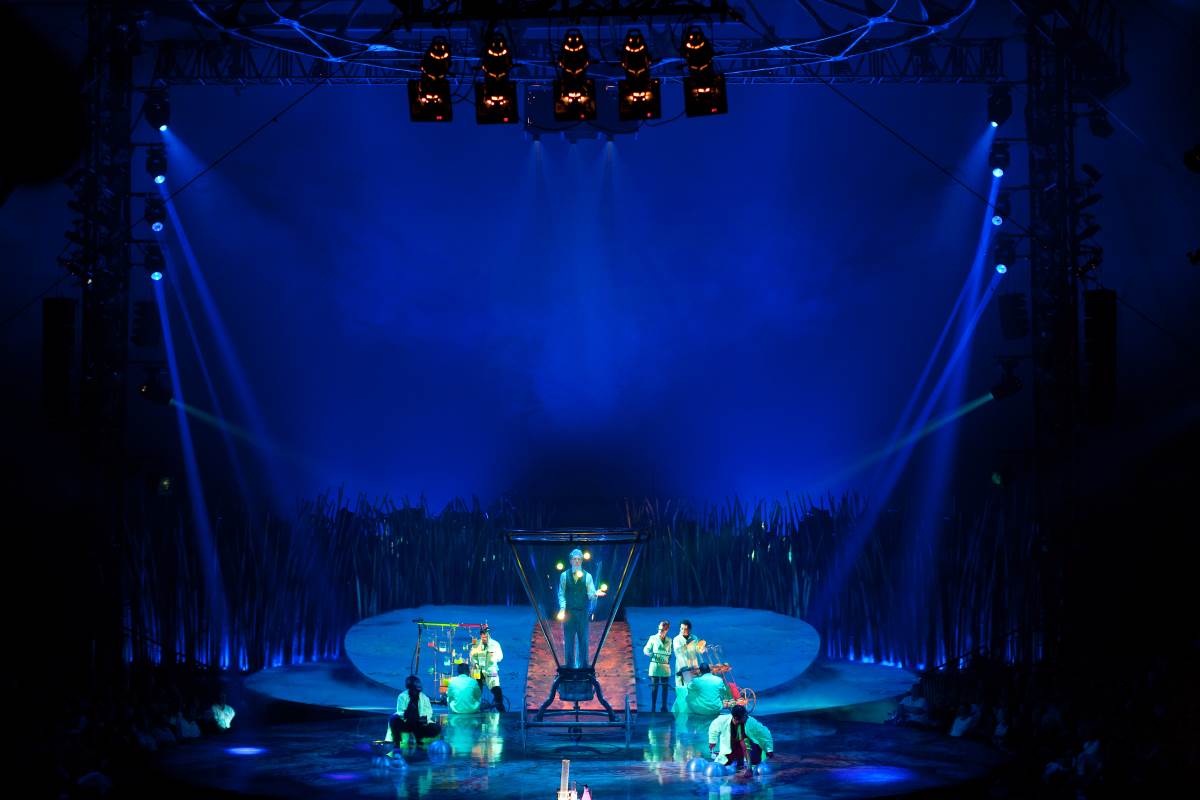 Valentino also makes a joke about Kangaroo milk and even makes one lady in the audience a little uncomfortable when he tries his best pick-up lines on her. The clown Misha also does this great mime-like fishing routine as he attempts to catch his dinner on a virtual lake that ends in disaster. To complement this duo in the comedy arena, there are also monkeys and cave men with one of the Neanderthals throwing popcorn in the others face as the audience went into hysterics.

However Cirque du Soleil’s Totem is about those acts that defy logic with the first most memorable act being the Rings Trio as three artists led by Alevtyna Titarenko perform this amusing beach inspired act high above the crowd as they fly, contort and execute some amazing acrobatic routines. Following the Rings Trio is the act entitled Unicycles with Bowls (Bai Xiangjie, Hao Yuting, He Xuedi, Wu Yurong and Yang Jie) that ride unicycles double their height around the stage and then flick bowls into each other’s hats by their feet only! This routine was complimented by their traditional Chinese costumes influenced by tribal designs. 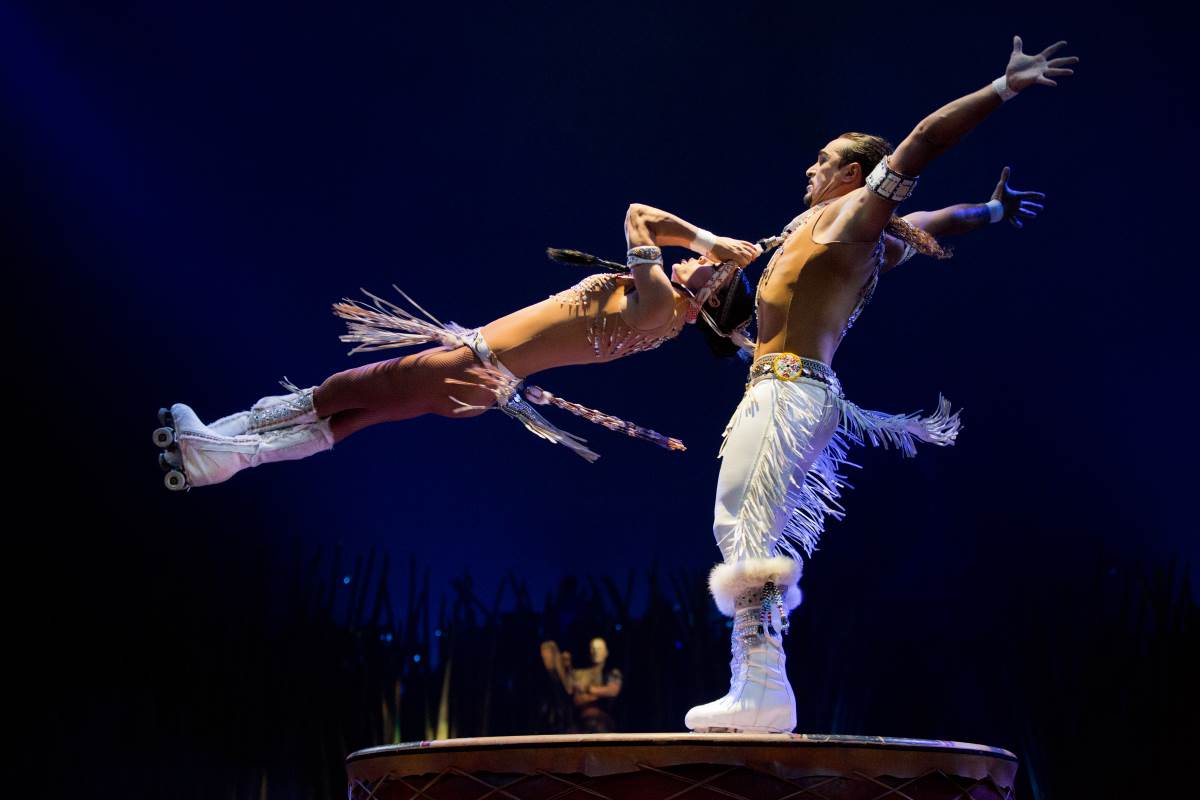 Then you have the amazing and stunning Crystal Ladies (Marina Tsodikova and Svetlana Tsodikova), the foot jugglers who mix and match their juggling as they spin fabric pieces of cloth on their feet and hands in all sorts of contorted positions. Add in the very sensual Roller Skating act with Denise Garcia-Sorta and Massimiliano Medini, dressed as two Native Americans in pure white who skate and dance on a very small circular platform to the grand finale of the Russian Bars that sees a handful of performers dressed as astronauts unleash some amazing balancing and acrobatic on the bars and Cirque du Soleil’s Totem is brimming with over the top excitement that will leave you craving for more. 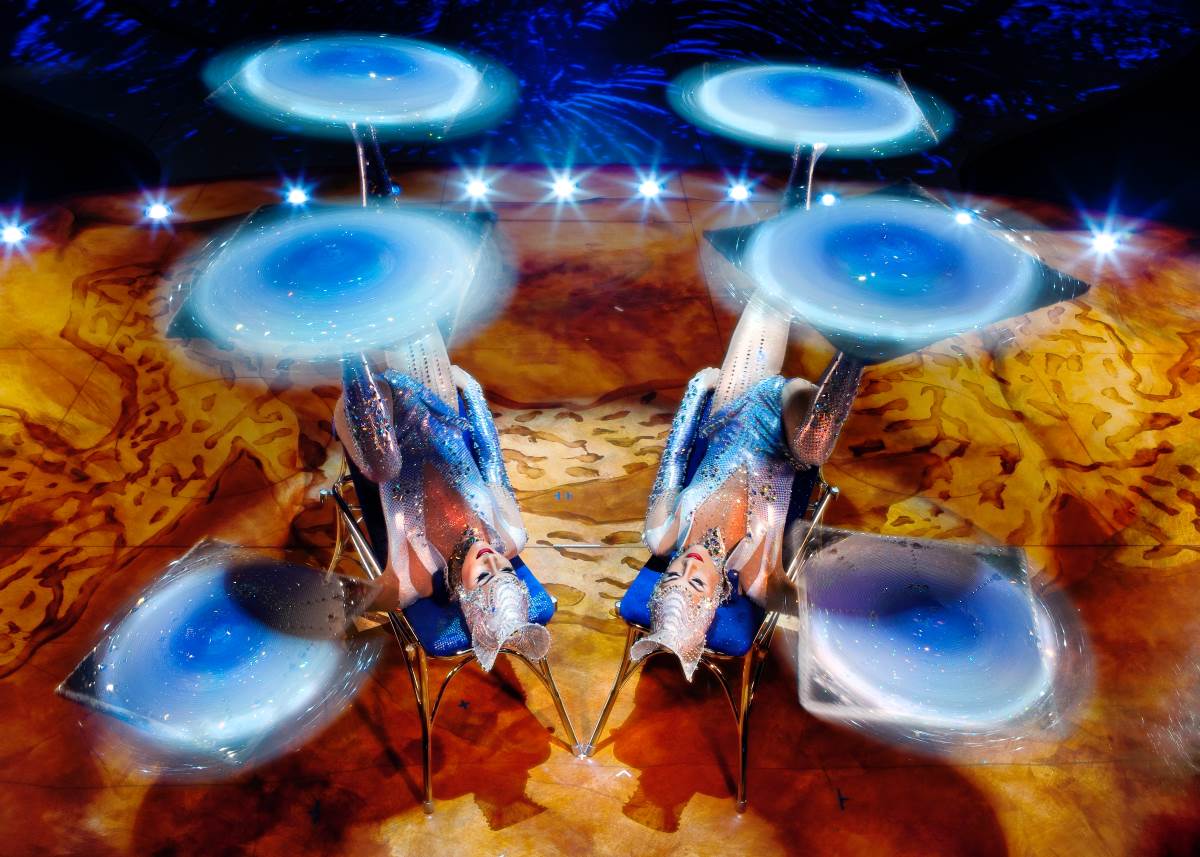 Set design plays another key component of Totem with two main pieces of equipment employed in this production to help immerse viewers into this magical world. Once such piece is The Turtle which is basically a huge skeleton of a giant turtle that is used by the artists in their performance such as the spectacular Bars Carapace act as strange frog-like creatures dance and spin around this complicated substructure. 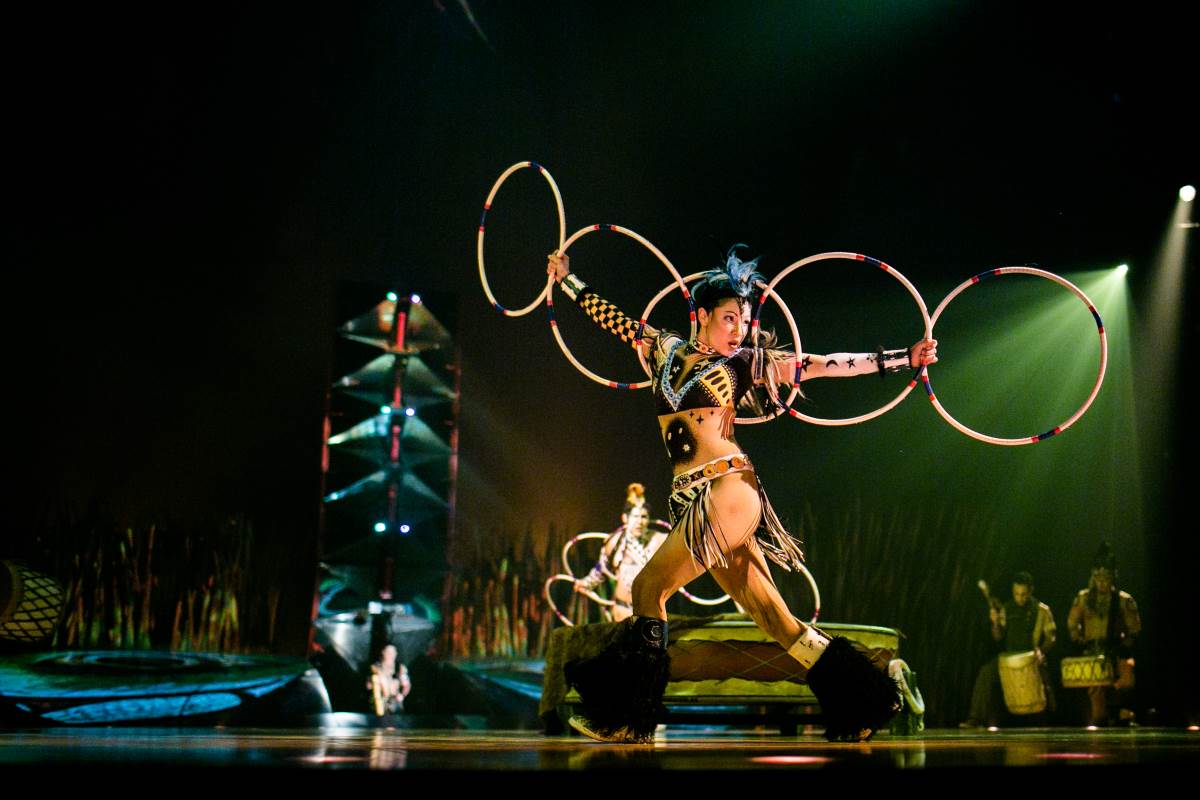 Another important piece of equipment is the interactive oval stage which forms part of the scorpion bridge. The oval stage with its projector is used to project images and videos to help with the immersive factor of Totem with the mechanical scorpion bridge used to create the illusion of a totem pole, boat and even rocket ship. To complement the performers and the set, the costumes in Totem thanks to Kym Barett are quite extravagant thanks to its amalgam of tribal themes, animals and vivid colours. A special mention should also be made to the music behind this show (Guy Dubuc and Marc Lessard) who channel this grunty Native American narrative that works well with the other musical themes incorporated from around the globe. 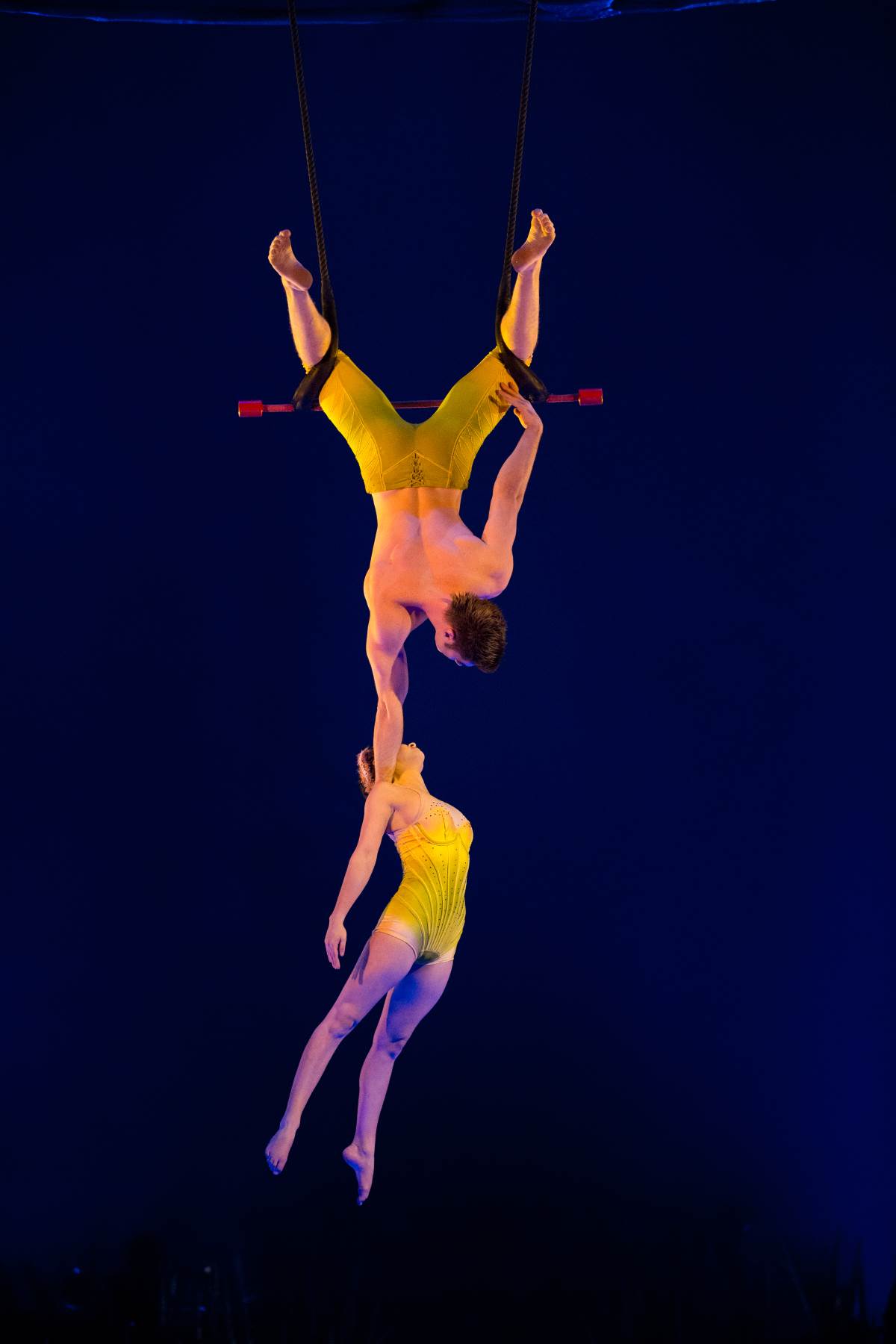 Totem is not just a journey of the evolution of humanity but also a celebration of the human body and how these amazingly talented and good looking performers can accomplish the unthinkable with their incredible circus feats. Add in the high quality production values of Totem from its sets, lighting plus costumes and Cirque du Soleil should be commended on a truly spectacular show that is easily the must see event of 2015! With Cirque du Soleil turning 30 this year (happy birthday) and with shows like Totem, it’s easy to see why this company is the greatest circus of all time!

So what are you waiting for, go see this amazing show now!