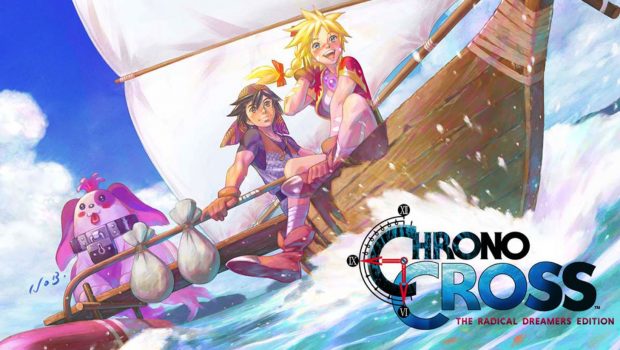 Summary: Chrono Cross: The Radical Dreamers edition brings a classic JRPG to the PAL region for the first time. The port may not be exceptional, but the game itself deserves to be experienced.

Chrono Cross is a strange beast. It was released in 1999 at one of the peaks of popularity for JRPGs.  It was also released by Square, who had been knocking out triple A, critically acclaimed and wildly popular games for the last few years like clockwork. On top of that, it’s the follow up to Chrono Trigger, one of the most beloved JRPG’s of all time. Yet it never saw a release in PAL territories despite receiving critical acclaim and strong sales. Now, 23 years later Chrono Cross: Radical Dreamers Edition gives us in PAL territories a chance to see what all the fuss is about.

Chrono Cross is the story of a young man named Serge. He lives a quiet life in the sleepy beachside town of Arni. One day, while collecting items for his love interest he finds himself transported in a parallel dimension. In this other world Serge finds out that he died as a young boy. What follows is a dimension hopping adventure trying to get to the bottom of what happened while the fate of the world hangs in the balance. 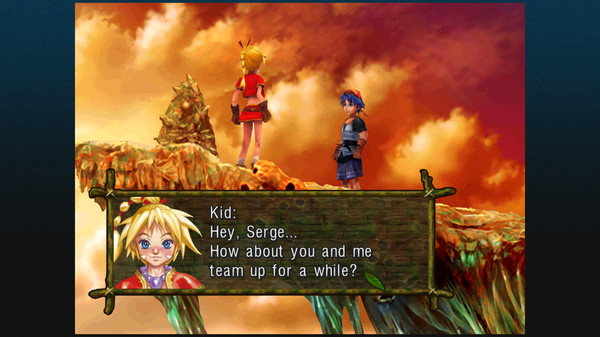 It’s an intriguing premise, and par for the course for PS1 JRPG’s, it gets appropriately batshit as it goes on. There are parts of the narrative that are convoluted but there is a lot to be said for the general atmosphere of the game. Chrono Cross is a thoughtful meditation on fate and death, and many of the dialogue exchanges between characters concern these two topics.

Chrono Cross is also unafraid to take big swings, especially when it comes to the legacy of the beloved Chrono Trigger. At the time this led to a bit of fan backlash, as if it was treating Trigger with disrespect. Now in 2022 with no new Chrono game in sight, the willingness to take chances with the franchise as a whole seems more admirable. 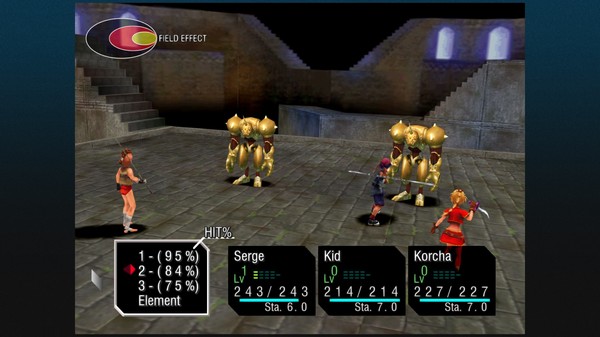 There are a huge cast of characters in Chrono Cross. There are 45 characters that can join your party, all billed as having distinct speech and backstories. That being said many of these backstories are explained quickly and never revisited. Additionally, a large portion of the characters have no significance to the main plot. A lot of them are charming, but the sheer quantity of them means their contributions to the game are slight.

You aren’t going to be able to recruit all 45 characters in one swoop either. Making certain choices in Chrono Cross will prevent you from recruiting some characters. Experiencing the full roster requires multiple playthroughs. There are also nine possible endings to encourage these . The New Game Plus options are excellent and give you the option of fighting the final boss at different points throughout the games story, having an effect on the conclusion. 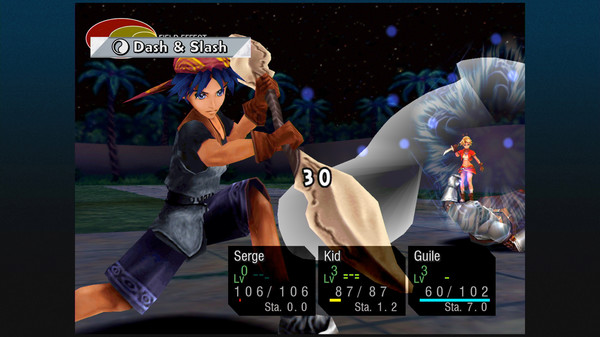 The battle system is peak PS1 era JRPG. A traditional turn-based battle with multiple tweaks to make it unique. When a character attacks they can choose between weak, normal and strong attacks. The weak attacks have the likeliest chance of hitting, while the strongest may miss. Chaining attacks together increases your chances of a strong attack landing.

In addition to this the magic system is based on elements that can be equipped to the party. Elements are grouped by colour, and have an opposing element that they are weak or strong against. In addition to this, there is an element field. Using the same element multiple times will influence the colour of the element field. For example. Using red elements multiple times will turn the element field red, meaning red elements do a lot more damage. This adds an extra layer of strategy to battle as each character and enemy has an innate element that they are strongest with. Battles are not random, and the levelling system is not affected by grinding. This makes Chrono Cross a refreshing experience as you don’t have to battle for hours and hours just to get good. 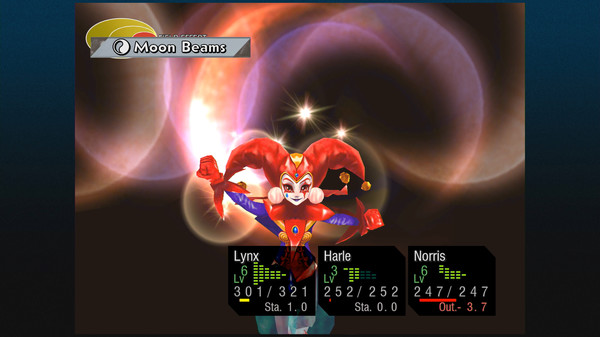 Let’s get down to the actual port of the game. It’s…. not great. I’ll start with the good. The remaster lets you choose between the original graphical style and the remastered graphics. The remastered character models look fairly decent. My favourite part of the remastered graphics is the way the pre-rendered backgrounds are presented. The pixelated backgrounds now look like beautiful hand painted vistas. The Chrono Cross art direction was fantastic in 1999, and there is still a lot to appreciate in 2022.

Where the port really stumbles is the gameplay. Technology has come a long way in the last 20 years. So, it is fairly inexcusable that the game runs so janky. The battles in particular are subject to frequent slowdown and stiffness. Battles almost require the use of the speed up button to make them run effectively. It’s off putting, and it not befitting of a game with the quality of Chrono Cross. 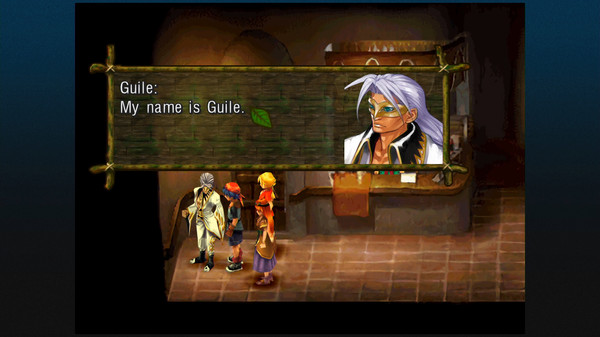 The quality of life upgrades are welcomed. There is the ability to speed up the game, which as mentioned previously comes in handy. You can also slow down the game, eliminate encounters and put on battle boosters, which make it so your characters take no damage.

The other big addition is the inclusion of Radical Dreamers. This has never seen a western release before, the only way to experience it would be with a ROM hack. Radical Dreamers is a visual novel that includes player choice that influences the outcome of the story. Today, there are far better examples of visual novels that make Radical Dreamers a bit of a frustrating experience. But it doesn’t take long to play, and it is fascinating to see many of the ideas that ended up in Chrono Cross take shape here.

Chrono Cross is a strange, wonderful game that was not afraid to take big risks. The port doesn’t exactly cover it in glory but considering the game has been languishing in purgatory for so long it’s nice that it sees the light of day at all. There is little here for people who aren’t already fans of the genre to recommend. But for JRPG fans this is a fascinating time capsule, especially for PAL gamers who didn’t get to experience it first time round.