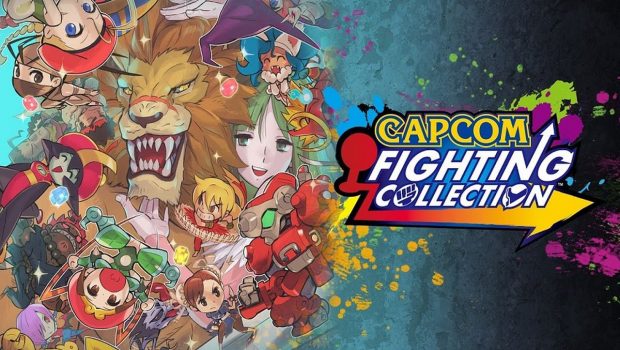 Summary: More an homage to Darkstalkers to anything, a solidly packaged and presented array of the more obscure 1990s Capcom fighters.

It’s hard to imagine a world of Capcom fighters outside of the stalwart Street Fighter series and its supporting engine. But along comes Capcom Fighting Collection, a rarest snapshot into the greater 1990’s Capcom fight game universe.

Yes, there’s logically a Street Fighter game in this collection…Hyper Street Fighter II: Anniversary Edition (‘Hyper II’) from 2004. In context, it arguably serves as a culmination of the other titles in the Capcom Fighting Collection to from 1994-2004, specifically the features they iteratively introduced and then mastered. In tandem, Hyper II also showcases how far the Street Fighter series evolved to 2004, with it featuring literally the entire collective Street Fighter roster.

There’s also Super Puzzle Fighter 2 Turbo (1996) and Super Gem Fighter Mini Mix (1997), both partially derived from the Street Fighter universe. The former – an awesome multiplayer title – was widely known as a precursor to the Bejeweled genre of matching and chaining crystals, the latter comprised of a simplified Capcom fighting engine with odd gem power-ups. These two titles likewise borrow from the rosters of the rest of this collection. 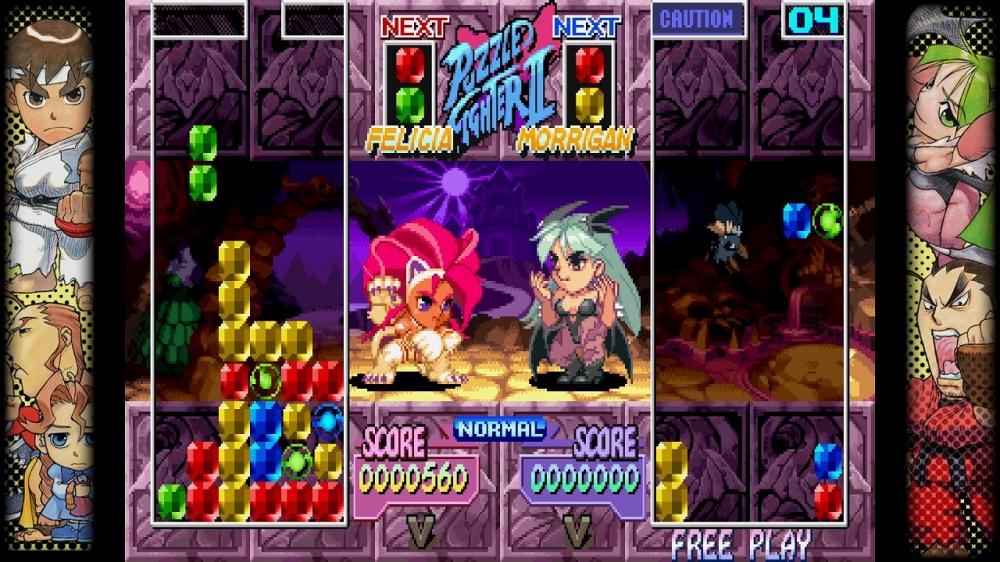 The clear stars of Capcom Fighting Collection are the several iterations of Darkstalkers (1994), a series comprised of a fun and wonderfully diverse roster of mythical creatures. As Capcom borrowed movesets and archetypes across its fighting game engines, Darkstalkers (, or Vampire Savior/Hunter as it was known in Japan,) should feel right at home to any Street Fighter fan with a favorite character or two.

It’s all Darkstalkers all the time. The Capcom Fighter Collection features Night Warriors: Darkstalkers’ Revenge (1995), Vampire Savior: The Lord of Vampire (1997), Vampire Hunter 2: Darkstalkers’ Revenge (1997) and Vampire Savior 2: The Lord of Vampire (1997). The last titles – until now – were only available in Japan. Japanese versions of these games are logically mainly in Japanese, with menus thankfully easily accessible and in English.

Akin to Street Fighter, and as the Darkstalkers series advanced, so too did the array of speed options, special/chain moves and related character modifications. With only two years between all these captured titles, changes – to include roster – are minimal. Across all, I enjoyed the winning system of defeating two full health bars (with slight delay after losing one) versus rounds (native to Street Fighter). This just seems more natural. 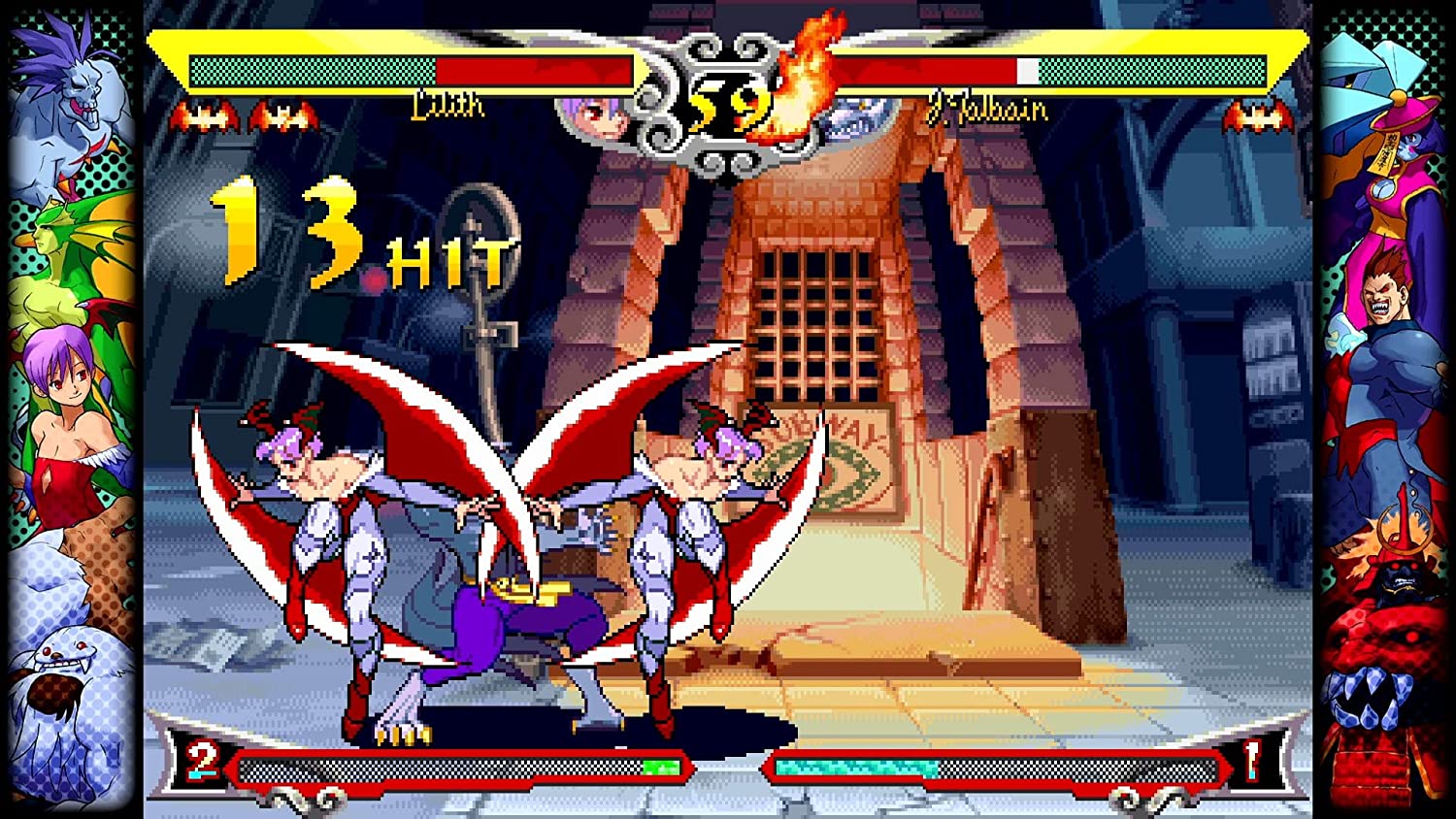 Working backwards chronologically, the last two pieces of Capcom Fighting Collection are a bit of anomaly but not in a bad way. Cyberbots Fullmetal Madness (1994) – which I never even heard of prior to this experience – is a mech fighting game with a fairly raw fighting engine for its time. The game looks beautiful and is ridiculously creative (having split mechs is amazing!), although blatantly devoid of the chain mechanics of Darkstalkers and Street Fighter to keep things dynamic. What results is a pretty staccato experience of combos and button mashing, but a nice entry point to what was to come.

Finally, Red Earth (1996) is a pretty unique approach to the Capcom fighting paradigm, with a smallest roster (four available players) and fights comprised of boss battles. Victories and experience ultimately level up each character…again a unique dynamic. I found this game surprisingly quite engaging, and the bosses seriously cool. There is a certain charm to Red Earth, and a shame it took this long for it to finally appear on a console. Importantly, Red Earth is the first title use of Capcom’s CP System III arcade hardware, one later found in the legendary Street Fighter III.

Most of the Capcom Fighter Collection are capable of un/ranked local and online multiplayer. Multiplayer is organized in stellar fashion, with users able to pick any/all games to match opponents to (should they select any of the same options). Multiplayer can remain in a queue during single player (offline) or while browsing the Museum. Capcom Fighter Collection also features online cross-play also rollback netcode (to decrease latency across systems and platforms). I couldn’t test this out at time of release, as I couldn’t find a player to match to (being so new). 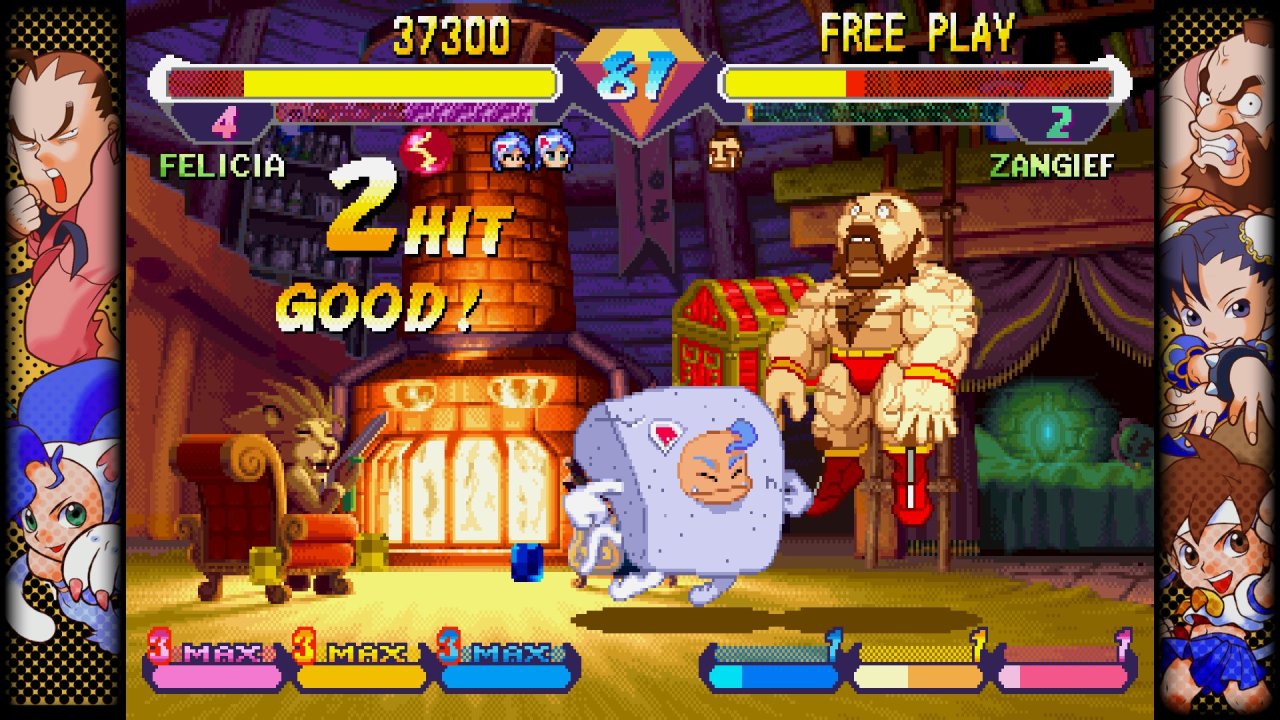 Speaking of Museum, this mode is bursting with terrific original artwork and all of the games’ soundtracks. Everything in Capcom Fighter Collection is well organized, making browsing the Museum and/or jumping across titles a snap. Exiting games is similarly really easy, executed within a simple press of the minus key (pause) menu. Related, move lists are easily found for every character in said menu. Last, solid training modes accompany every single game to reduce learning curves and/or induce recall.

Presentation and execution are strongest points of the Capcom Fighter Collection. Visuals and audio are pixel and audible chip perfect in OLED handheld, and – even with the analog stick – everything controls very well. This is easily one of the best retro collections on the market, and with no noticeable flaws of any kind.

If there’s a criticism of Capcom Fighter Collection, it is the lack of diversity. If Darkstalkers wasn’t your thing the first time around, there’s almost no reason to pick this up. Street Fighter fans may also feel let down by but one (and not the best) option. With this being said: for anyone new to Darkstalkers and/or most of the titles here, bang for the buck is tremendous. Especially if you have a buddy to play against.

An homage to Darkstalkers more than anything, Capcom Fighter Collection is well packaged, presented and executed. There’s not a lot of title diversity, but a few make their first overdue appearance outside of Japan and arcades.