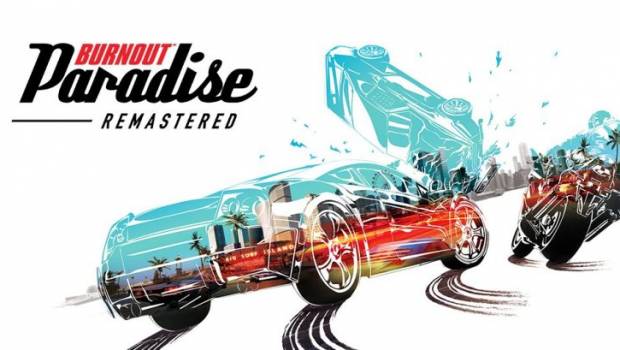 Summary: Burnout Paradise Remastered is the same Burnout Paradise you know and love, brought back to life for modern consoles. A few outdated mechanics doesn't stop this from being one of the best arcade racers around.

When it comes to gaming’s most ferocious “Us vs. Them” debates, few can match the fervour of Burnout fans contesting the epitome of the series between Burnout 3: Takedown and Burnout Paradise. Takedown fans will tell you that Paradise’s open-world design dilutes the Burnout experience. Paradise fans will argue that an open-world is the perfect playground for Burnout’s unique brand of mayhem. After playing through the recently released Burnout Paradise Remastered, arguments from both sides carry some weight, but one thing everyone can agree on is that Burnout Paradise is still an undeniably fun game.

Burnout Paradise Remastered does exactly what it says in the title: the last game in EA’s beloved car-crashing franchise has been brought back to life with a graphical overhaul and a tonne of DLC thrown in. The gameplay remains completely untouched, which will come as a relief to returning fans but may put the spotlight on some out-dated mechanics for newcomers.

If you’re unfamiliar with the Burnout franchise, the series started out in 2001 as a modern-day arcade racer with a strong fetish for spectacular crashes. With subsequent releases, white-knuckle racing and ridiculous wrecks became the game’s focal point. The series eventually followed the hottest trend in gaming at the time and moved to an open-world formula in 2008 with Burnout Paradise.

In many ways this open-world formula works surprisingly well for the Burnout series. Collectibles littered throughout the world come in the form of discovering shortcuts, smashing billboards, completing stunt jumps and destroying rare cars to unlock them to use in events. Boosting around and scouring the world in your unbranded muscle car to find these collectibles is great fun. The downside of the open world formula is the way its design influences the events you’ll be competing in.

There are no set tracks in Burnout Paradise. You start an event at any set of traffic lights on the map and finish at one of eight locations throughout the world. How you get there is up to you. On the positive side, races are very free form and learning the city with its many hidden shortcuts puts you at an advantage. On the other hand, this means you’ll be spending a lot of time driving the same routes through the mountains to get to the observatory, with only slight variations at the beginning of the races.

The more egregious aspect of this system is that the game doesn’t give you the option to restart the race if you get off to a bad start, or retry the race if you’re just edged out over the finish line. If you want to try that exact same event again, you need to drive all the way back across the map to start the race again, as there’s no fast travel system.

Unfortunately, this isn’t the only out-dated mechanic that has been thoroughly addressed by modern open-world racing games. Burnout paradise uses a unique compass system to guide you along the optimum path to your destination. Street signs at the top of the screen tell you what road you’re on and how far away an upcoming turn is. It’s an odd system that takes a while to become familiar with and unfortunately it means you’ll be spending a lot of time staring at the mini-map while you’re weaving through traffic to ensure you make the right turn. So expect a lot of frustrating head-on collisions until you become more familiar with the layout of the city.

It seems I dedicated a lot of page space in this review talking about the negative aspects of Burnout Paradise, which is rather disingenuous as ultimately these complaints had very little impact on the overall excellent experience I had with this game because everything else about Burnout Paradise Remastered is so darn good.

I could write another ten paragraphs about everything Burnout Paradise Remastered gets right, but I’ll spare it by briefly summarising. The driving feels fantastic. The cars are abundant and varied. The world is ingeniously designed to be both fun to explore and race around. The included DLC adds a tonne of new content to the base game. The car-crashing tech is as good as it has ever been and the online multiplayer is uniquely fun.

Burnout Paradise Remastered is a great package. Fans of the series will relish seeing the signature high-speed, car-crashing mayhem being rendered in glorious 4k at 60fps (if you’ve got an Xbox One, PS4 or a beefy PC). Newcomers that can overcome a few speed bumps in the form of some out-dated mechanics will find a great entry point to the series with some of the best arcade racing the genre has to offer. Here’s hoping EA is testing the waters with Burnout Paradise Remastered and we start to see more action and less talking in the next Need for Speed.