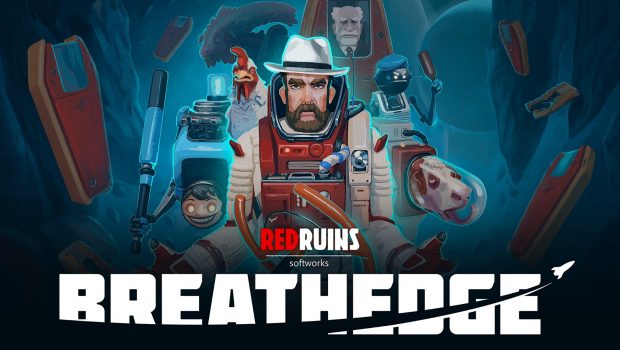 Summary: Traveling through space with your Grandfather’s corpse and his immortal pet chicken, to deliver his remains to a giant space funeral should not be that difficult.

Just as enjoyable as the PC version, Breathedge can now be played and enjoyed on the XBox One | XSX (reviewed) and the PlayStation 4 | PS5 and again, it’s one hell of a ride in outer space. It’s also one weird ride courtesy of the strange yet humorous story as you been tasked to deliver your grandfather’s corpse and his immortal pet chicken to a giant space funeral that shouldn’t be that difficult right? Unfortunately when the giant spaceship you are traveling on is full of other passengers doing the exact same thing for their own dearly departed, things go a little awry. That is, of course, until the ship explodes, killing everyone but you and your chicken. Now it is up to you to survive the cold dark vacuum of space as you explore the wreckage, crafting items that will help you get home. Welcome to ‘Breathedge’, the comical and ironic space survival game from developer RedRuins Softworks.

Galactic funerals are now the way of the future and the modern way to give your beloved the proper sendoff they truly deserve. Such is the case for your late Grandfather, whose remains are your responsibility to deliver to the site of the galactic funeral. Traveling aboard the “Untitled” spaceship owned by the Breathedge Funeral Company, your journey takes an unexpected turn when the ship suddenly explodes, killing everyone aboard and sending all of it’s contents out into space. As the sole human survivor, you must find a way home by utilizing whatever resources you can find amongst the wreckage. With a limited air supply, players must bravely venture out into the cold vacuum of space to grab whatever then can in order to upgrade their suit and travel further towards salvation. 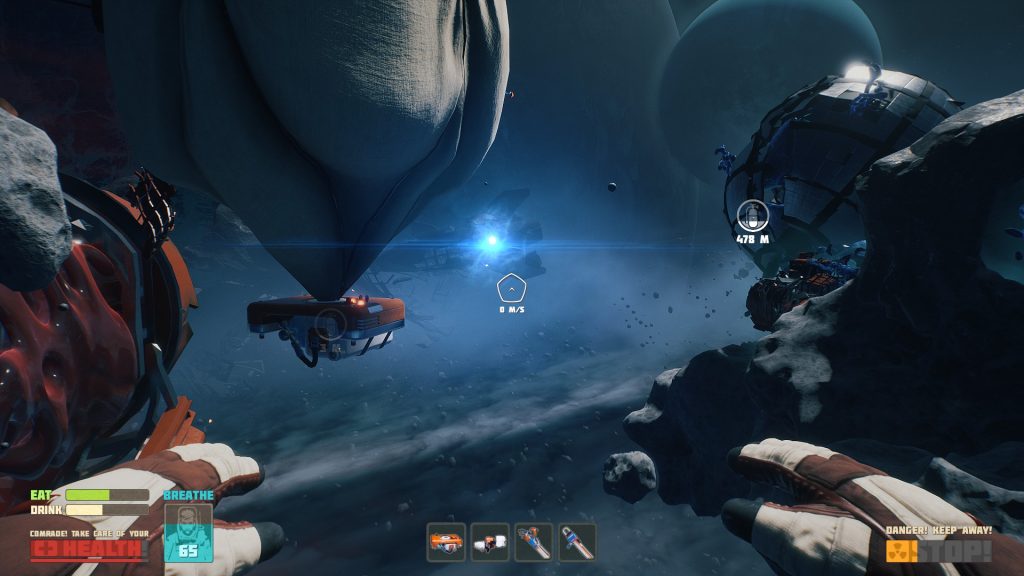 Players begin at one end of the giant wreckage, using the crashed remains of their cabin as a temporary base of operations. Here, players will be able to craft new items and restock their air supply before doing another mad dash to collect whatever resources are within reach. Figuring out how far you can travel from your cabin without suffocating will take some practice and a fair amount of risk taking. Once players have learnt how to craft larger air tanks out of industrial strength condoms, exploration becomes a little bit easier but still requires players to make judgment calls on when to return to their cabin to refill their air supply. Eventually, players will learn how to craft portable oxygen hubs that can be used refill their air supply while out exploring, allowing players to create networks of air supplies and progress further into the wreckage. At first, this process might seem a bit slow and tedious, but it helps towards building a strong foundation for the story and the realization of the players need to survive.

For me, the most frustrating part of this was figuring out which way I needed to go in order to unlock the next area. ‘Breathedge’ has a surprising number of locations to explore, even from an early point in the game. Each section of the map is unique and offers it’s own comical commentary from your space suit’s onboard AI. The developers have clearly had an enormous amount of fun making this game, lining it full of cheesy pop culture references and jokes – In some cases, going as far to recreate scenes from well-known books and films. My personal favorite was when I came across a section of the ship’s cafeteria and found a dead astronaut holding a tea party like the Mad Hatter from Alice in Wonderland. Other references have included everything from Cyberpunk 2077 to The Terminator. Although, some of the jokes are a little bit more adult orientated, players are going to have a good laugh playing this game.

As soon as you make it out of the starting area and unlock chapter 2, the game really opens up to its full potential. New crafting items quickly become available, including vehicles and base construction, with the focus switching from watching your oxygen levels to managing your inventory and solving puzzles. Once the player has found their footing within the game, ‘Breathedge’ then starts challenging the player to use the skills they have learnt and develop to figure out creative ways to unlock new sections of the map. Players will need to keep a keen eye out for new resources and explore every location to discover new crafting blueprints and unique resources. While the goal of the game is to escape the crash site and get back to civilization, ‘Breathedge’ offers multiple objectives for the player to complete in any order they choose. For me, this allows more time to explore and enjoy the game rather than feeling stressed or rushed to finish it. As I zoomed around on my rocket-bike, exploring the wreckage, and observing the peculiar ways that many of the crew had died or attempted to survive, I felt like a little kid exploring a giant playground. Here I was with all of these new and exciting things to interact with and discover, with my curiosity as my guide. Truth be told, ‘Breathedge’ does provide an odd level of satisfaction and achievement with every new area that you unlock. The constant reminder that oxygen is not unlimited and that you have only so much time before you must return to a supply point really heightens the excitement when you muster up the courage to go that little bit further than you did last time and be rewarded with a new discovery or point of refuge. 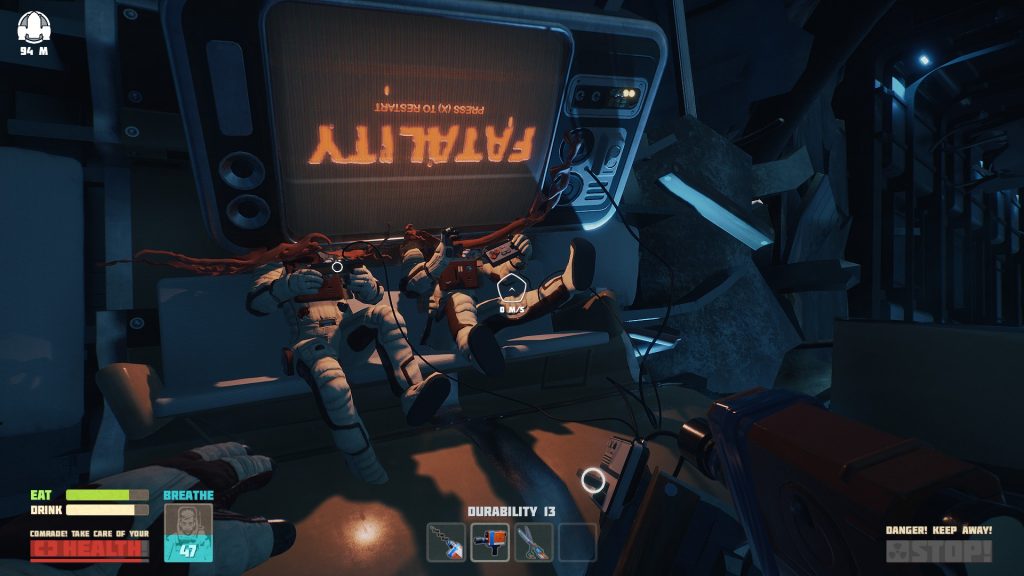 The crafting system of ‘Breathedge’ is quite unique and not something that I’ve seen in other games. Using a scanner, players can discover new blueprints from different elements they discover in the wreckage. Most of the new blueprints you will find are used in constructing and decorating your own base. Realistically, players won’t need to craft everything they discover and can get by with just a basic base with a crafting table, oxygen generator, and a bed. Everything else is mostly cosmetic but still lots of fun to build, giving players a creative outlet while drifting aimlessly through space. Players are also given a range of unique tools to craft as well, ranging from your basic hammer-like smashing tool to cans of explosive beef flavored food pellets. In essence, the developers took a big step away from the normal tools found in most survival games and designed unique gadgets that really do look like they’ve been made out of scrap junk and masking tape, further adding to the overall running riot of laughs this game provides. 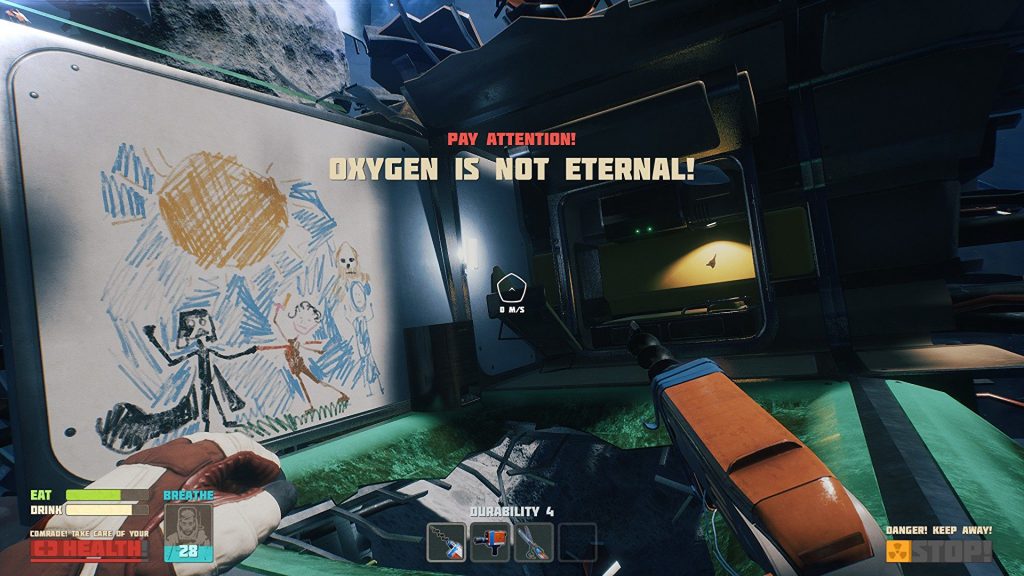 ‘Breathedge’ is far from your normal, everyday, run-of-the-mill survival games for a magnitude of hysterical reasons that are worth discovering for yourself. Although the game starts a little slow, the constant slapstick dad jokes break up the mundane repetition that players normally encounter when starting a new survival game. It will take a little bit of the game to build up steam and really get going but it’s a necessary element that pays off later when players are required to solve more creative puzzles. Breathedge is one of those games you can play casually at your own pace and doesn’t require long consecutive amounts of time to play. Sparring 15-20 minutes here and there is all that’s required for a steady progression through the game but still very enjoyable if you’ve got ample time up your sleeve as well. I highly recommend this game to anyone who enjoys easter egg styled dad jokes or wants something oddly rewarding to play at a casual pace.