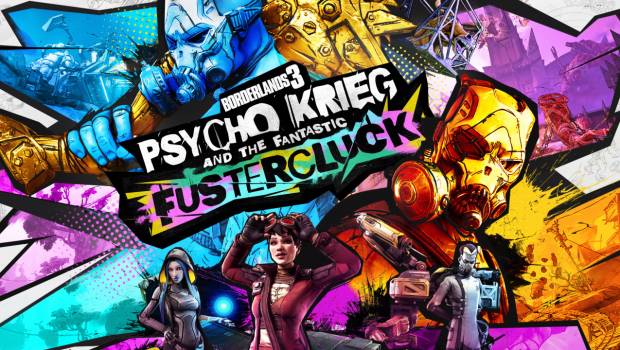 Summary: Taking place after the events of the main Borderlands 3 campaign, “Psycho Krieg and the fantastic Fustercluck” follows Dr Patricia Tannis as she explores the secrets behind one of the game’s biggest mysteries: what makes a psycho a psycho?

As the fourth and final DLC title for Borderlands 3, “Psycho Krieg and the fantastic Fustercluck” entices players to grab their meat bicycle and prepare themselves, for they are about to journey to the one of the most dangerous, neglected, unstable and all-round messed up places in the universe: the mind of a Psycho. Until now, nobody has discovered the truth behind what drives these crazed mask-wearing bandits of the wastelands.

Gameplay
Taking place after the events of the main Borderlands 3 campaign, “Psycho Krieg and the fantastic Fustercluck” follows Dr Patricia Tannis as she explores the secrets behind one of the game’s biggest mysteries: what makes a psycho a psycho? First appearing in the first Borderlands game back in 2009, psychos were nothing more than the faceless bandits of the wasteland, essentially acting as the main humanoid ‘cannon fodder’ of the game. Their iconic face mask and buzz-axe combined with crudely outlandish war cries quickly made them a hit among fans, leading to the introduction of Krieg the psycho as a DLC character in Borderlands 2. Yet, the more their popularity grew, the more gamers realised how little we actually knew about them. Fast forward to Borderlands 3’s final DLC – “Borderlands 3: Psycho Krieg and the fantastic Fustercluck”, and we finally get our answer. However, the level of satisfaction from knowing the truth is still yet the be determined. 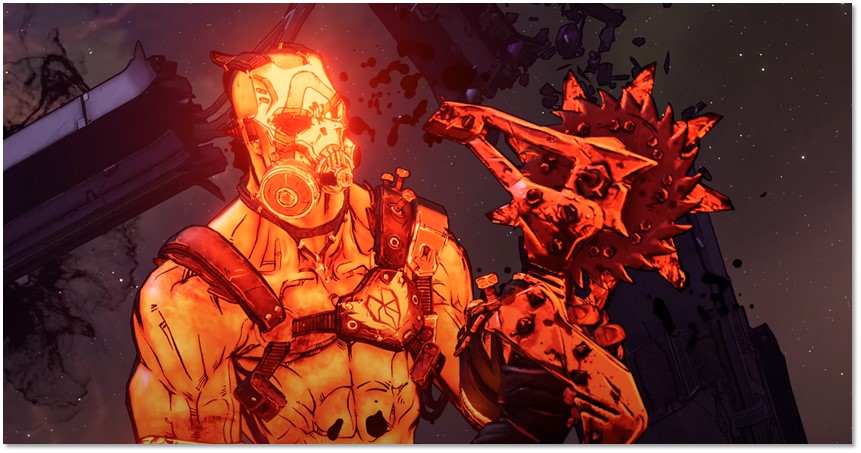 The adventure into Krieg’s mind begins with Tannis wanting to discover if there is any truth behind her theory that all psychos are all driven crazy due to having knowledge about a mythical place she’s dubbed ‘Vaulthalla’. Additionally, Tannis has also therorised that the most badass of psychos, Krieg, actually has the location of ‘Vaulthalla’ locked away somewhere in his broken mind and that the only way to locate it is to venture into his psyche. In theory, this sounds like a half decent plot for a DLC, especially considering it’s the last DLC for the game that is included in the season pass. Anyone who has played Borderlands will know that the developers love mixing pop-culture references into their games for extra humor. With that in mind, you would expect the developers to really excel with references towards films like “The Matrix”. However, it saddens me that an idea with such potential just doesn’t live up to the hype.

Exploring the mind of a broken murder machine whose most coherent form of verbal communication consists of phrases that make no real sense is quite the surreal experience. Within Krieg’s mind is his inner psych, split into two halves: the part of him who is still somewhat sane, and the other who is far from it. Together, these two split personalities act as your guide through the linear maze that is Krieg’s mind. Consisting of only four levels, each requires the player to retrieve a personal item from his memories in order to venture further, as you are then removing the mental barriers that Krieg’s insanity has put in place to protect him from the trauma he has been through. Personally, I thought that this experience would have been much more diverse but as I completed each level, I started to realise just how sad and broken Krieg really is. Given that Borderlands normally take the mickey out of almost anything, I felt this to be quite a gloomy experience. The extreme lack of side missions keeps players firmly focused on the main storyline, with no real reason to venture off and explore or revisit previous areas. I’m not sure if it’s because of the state that the world is currently in, but it really felt like the DLC was unfinished. 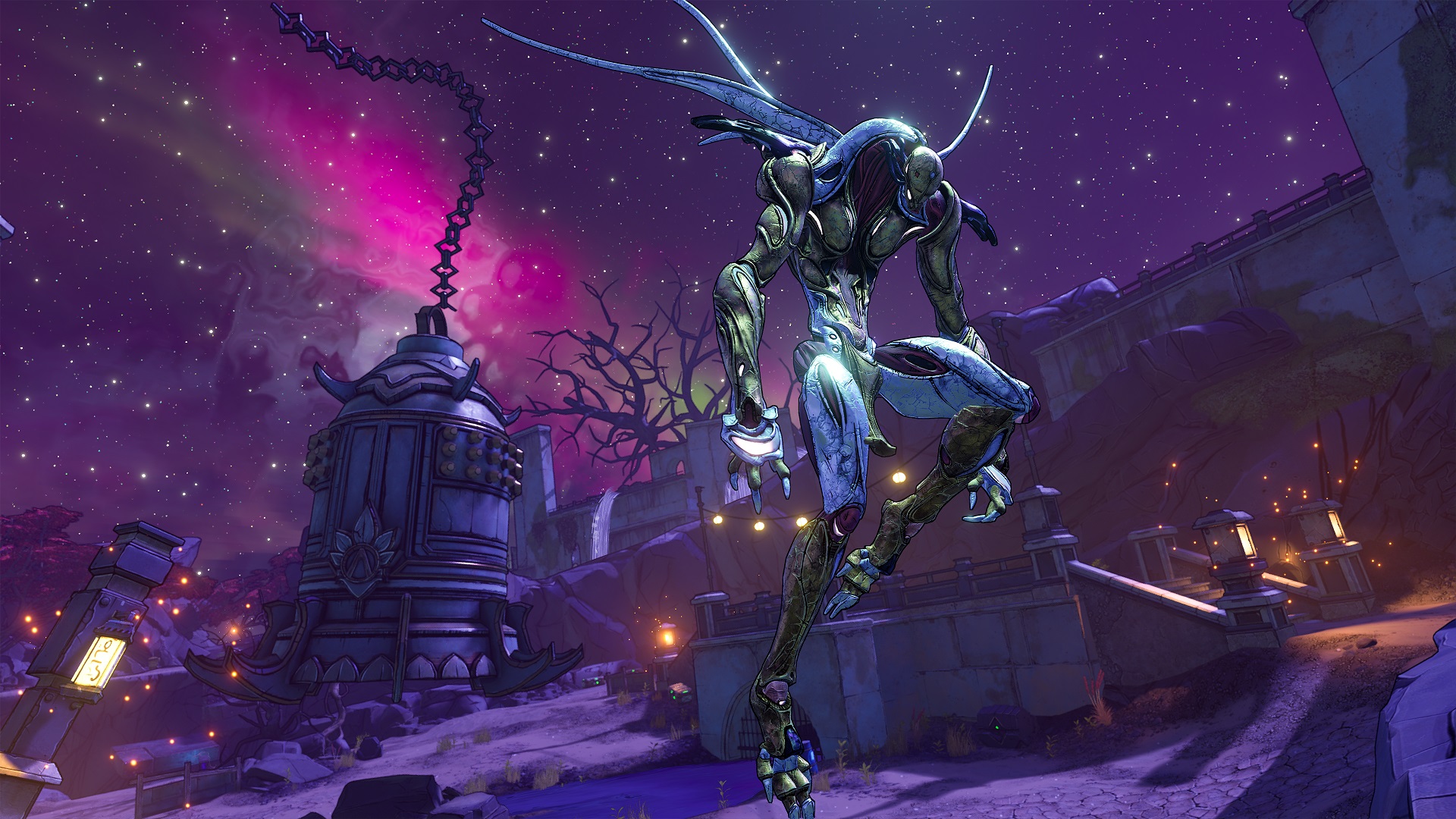 In terms of new elements, “Psycho Krieg and the fantastic Fustercluck” doesn’t really introduce anything new to the Borderlands universe. Aside from the boss fights and a handful of new enemies, most of what you will encounter is stuff that’s already been seen before. At first, I figured the developers were just recycling old material, but then I realised that since we’re exploring Krieg’s memories, there wouldn’t be much need for anything new. On one hand, it makes perfect sense, but on the other, it feels unfinished and, dare I say it, a little disappointing. I would have loved to have seen more wacky versions of things we’ve already encountered, just as you’d expect to see within the mind of someone who has a warped sense of reality. But at the end of the day, Krieg’s mind is a very dark place filled with pain and horrors from what was once a normal life. In many ways, this DLC is a reflection, or better yet, a visual representation of what someone with severe mental goes through on a daily basis. Imagine having to live a normal life only to have something like Krieg’s memories haunting you. It would be enough to drive anyone crazy and the more I think about it, the more I start to realise just how much of a talking point this DLC becomes. It’s not the most glamorous DLC that you’d expect to find in a Borderlands game, but it does stay true to the witty flavour of satire that we’ve all come to know and love.

Final Thoughts
“Borderlands 3: Psycho Krieg and the fantastic Fustercluck” may not be the longest DLC in the franchise but it still sticks true to what you’d expect for a Borderlands DLC. While the concept is very similar to past DLC’s of previous games from within the series, the underlying message about mental health, coping, the loss of a loved one, and depression make for excellent talking points between friends and families. I’m not sure if that was the original intention of the DLC but given the global pandemic we currently find ourselves in, I think it’s an appropriate method for gamers of all ages to self-reflect on how they’re holding up. Unfortunately, the game does feel very short and because of that, it comes across as unfinished. But at the end of the day, we get some really sweet loot, discover the truth behind one of the biggest mysteries in Borderlands history, and help Krieg deal with his demons.