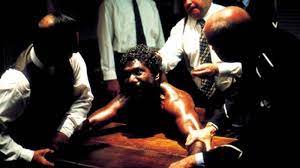 Summary: a legal drama about an important Australian case. Both sides of the story are presented but this means things seem somewhat toothless.

“Black & White” is a film that suggests that things in life are anything but. It is inspired by real events that occurred in Australia in 1958. In what played out like a real-life “To Kill a Mockingbird,” this film looks into a murder trial involving an indigenous man who was convicted and sentenced to be hanged on the basis of some questionable evidence.

Craig Lahiff directs the screenplay by Louis Nowra and you get the sense that they are trying to keep an air of impartiality here. Both the prosecution and defence’s side of things are presented. While this kind of storytelling works in some situations, in this one it simply lacks conviction and the cut-through it could have had, had it been less toothless.

Robert Carlyle (“Trainspotting”) stars as David O’Sullivan, a dogged defence lawyer. He represents Max Stuart (the excellent, David Ngoombujarra who brings a lot of empathy to the role). The latter is accused of the rape and murder of a young girl in rural South Australia. The evidence is an alleged signed confession from Stuart even though his second language is English (his first is Arrernte) and he cannot read or write. O’Sullivan puts in the good fight against a brutal and corrupt police force at a time when doing so means careers suicide. He would present arguments at every level of Australian court, the Privy Council and even a Royal Commission.

This feels like a major miscarriage of justice even though the Commission did not overturn Stuart’s conviction. This case was an important one that fuelled debate against capital punishment. The story got picked up by a young Rupert Murdoch (Ben Mendelsohn) at “The News”.

Charles Dance is convincing as the evil Crown Prosecutor. Sadly, many of the supporting characters are cookie-cutter ones as we get very little backstory and characterisation. O’Sullivan’s lawyer partner Helen Devaney (Kerry Fox) is a drunk while a sympathetic Catholic priest (Colin Friels) is questioned about his relationship with a woman as well as his faith in God. We learn very little about their motivations for being involved.

The film’s script has some terms in it that some audiences may find offensive and do not add to the story. Yes, this is about racism and identity for Stuart, as he feels rejected by both indigenous and white people even though that is his heritage. But it is unnecessary to use things like the “N-word” even though it was likely used and accepted at the time things transpired.

This edition is the first time the film has been released on Blu-ray. While it has undergone some restoration, there is still a little deterioration evident in the audio and videos. The special features include an electronic press kit, deleted scenes and a trailer. There is also a seminar with Geoffrey Robertson QC and High Court Justice Michael Kirby for the keen legal eagles.

“Black & White” is a fascinating look at power and privilege but ultimately feels like a mixed bag. While it is good to watch and learn about this case, some aspects of its rendering could have been tightened to give this impactful event its due. Because as it stands this important historic event feels somewhat confined to the books.