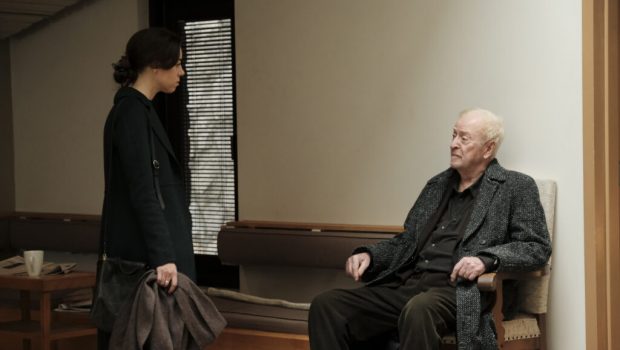 Summary: An icon like Michael Caine cannot save this mild-mannered and predictable dramedy. It’s little more than tired troupes and lashings of schmaltz. Snooze.

It seems that “Best Sellers” was trying to live up to the lofty heights of its title. Unfortunately, this weak script and uneven tone mean it resembles the lead character’s catch-cry of “Bullshite” more often than not. This dramedy is about an implausible odd couple undertaking a road trip where they don’t need a map because the whole journey is so predictable.

Actor turned first-time director, Lina Roessler is at the helm and perhaps showing a little inexperience with a script by Anthony Grieco. It seems the latter is trying to skewer the publishing industry in today’s YouTube generation. You get the sense that he doesn’t think anyone reads anymore, which is completely false. And while the notion of looking at contemporary publishing isn’t a bad idea in our celebrity-focused culture, it is how it is realised that is lacking. Audiences will likely be left with the sense that there was a lot of unmined territory here that could have made things into a more cohesive hole.

The iconic Michael Caine stars as a curmudgeon author named Harris Shaw. He is a mix of JD Salinger, Hunter S Thompson and Bernard Black (of “Black Books” fame and yes, I know the latter isn’t a writer, but he has eccentricity down pat). Shaw is on a mission to derail his own book tour, preferring a side-show and vices such as drinking and smoking to all things literary. Shaw is only in it for the money because he was at risk of losing his house. He was enlisted because he just happens to owe a publishing company a manuscript and he had one ready despite it being 50 years between drinks.

Aubrey Plaza stars as Lucy Stanbridge, a workaholic publisher and Type A personality who inherited a company from her father. She keeps having to rail against people’s perceptions that she was born with a “silver spoon in her mouth” and is a “trust fund baby.” But there are times when she seems so completely inept at understanding marketing that she’s cartoonish. Her assistant, played by the delightful Ellen Wong, completely outshines her on many occasions.

Stanbridge embarks on a book tour with Shaw to save her publishing company from the evil clutches of a slimy competitor. This is a somewhat unlikely intergenerational pairing and while Caine is wonderful, it seems the two actors are lacking in chemistry. It’s hard for the audience not to call utter “bullshite” on the fact that they so quickly transform from bickering to heartfelt friends. I think people would have preferred the quarrelling dynamic be maintained longer. It was fun watching Harris sabotage the proceedings while Stanbridge was pedalling books. It’s certainly better than the schmaltzy, heart-warming alternative. Blah!

“Best Sellers” has a good soundtrack that fit the characters well. But one can’t help but wonder whether those involved have relied too much on this device to add depth to the meagre characterisation. Yes, Shaw is supposed to be the grumpy old man but there are times when he is just plain odd, like when he decides to publicly urinate on stage. How is that believable?

There are some people who may enjoy this breezy little film for its mild entertainment. They are likely to be the types who would find the prospect of Mr Caine reciting the phone book riveting. For the rest of us, this is a predictable and uneven bag of clichés. There is nothing novel here, only well-worn troupes about an odd fella and a workaholic. Call me curmudgeon but I think you’d be better off picking up an actual book…