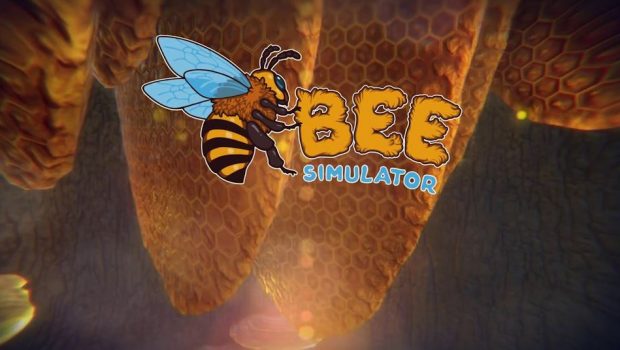 Summary: The Bee Simulator is unfortunately missing its Queen Bee and is a missed opportunity of what could have been an interesting game!

I only have myself to blame for getting so hyped up for a game called Bee Simulator. I had high hopes that this would be an in-depth game that puts you in the wings of a bee and lets you experience life as one of Earths most vital creatures, flying around the world, collecting pollen, helping keep trees alive by means of cross pollination. With that in mind, I’m not entirely sure what I’d expected going into this ‘simulator’ game. How do you gamify nature? How do you make the threats facing bees around the world into an enjoyable game? 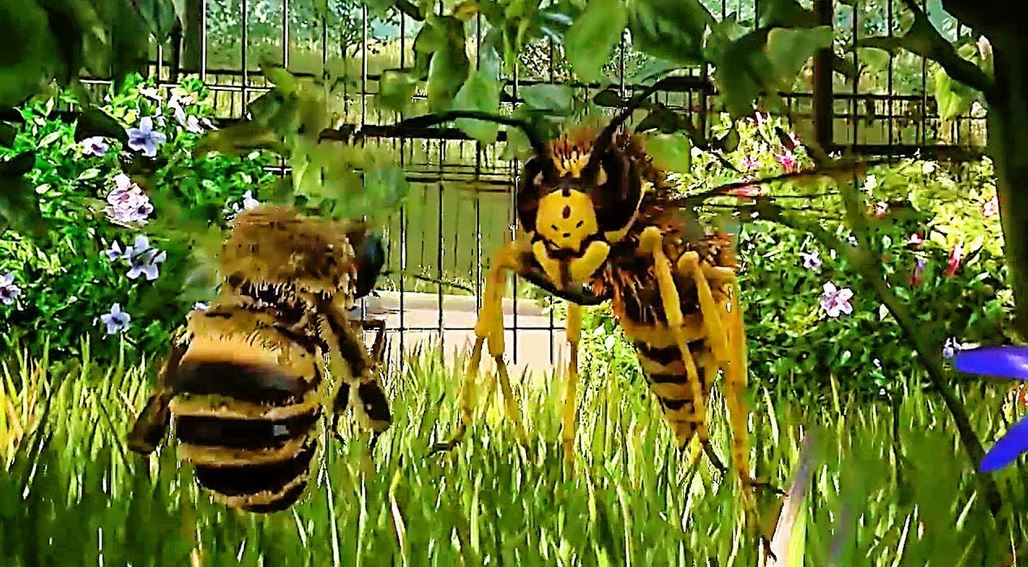 While Bee Simulator isn’t as egregious with the ‘simulator’ label as Goat Simulator or Surgeon Simulator are, it’s still a stretch to call this a ‘simulator’ game. I respect what Bee Simulator is partially attempting to do by educating players about the world of bees (the opening animated sequence covers in detail the importance of bees and the difficulties they face around the world), but the gameplay fails to reinforce that key message. This is less a simulation and more a glorified action game with racing, battles, and dancing blended into one, where useful information about bees is presented on the loading screens.

Here, your avatar is a little bee named ‘Beescuit’ (you can happily change it to anything else, but ‘Beescuit’ seemed sweet enough for me), and they’re given the task of learning how to move up the bee ranks and become a better bee.

First and foremost, Bee Simulator is most certainly a family friendly game, and with that in mind, it’s a perfect game for kids to play with. As soon as I realised this, I was able to put aside my minor frustrations about the creative liberties that the developers have taken with the lives of bees. First up, a worker bee will always be a worker bee, they don’t have to prove themselves as worthy bees to become protectors of the hive – they already do that. Secondly, when a honey bee stings someone or something, they die. Now, it certainly would make for a fairly devastating game if every time you stung someone you die, so I can appreciate why they’d change that part of bee life.

But in a bid to flesh out the game and add variety to the rather short narrative, the creative liberties reach eye brow raising levels. Sure, you do ‘bee’ things like collect pollen and eat sweet food for nourishment, but then you’re also tasked with battling wasps and hornets, helping lost squirrels, and taking place in dance battles. Now, bees do communicate via dancing, so that is partly correct, and they sure do defend their hives from predators, so I guess there’s another half tick there, but as I live in Australia, I cannot verify that bees assist squirrels with finding their parents, so we’ll chalk that up as being questionable.

These tasks are all completed through some fiddly minigames. Battles are poorly explained and become a chore. This isn’t helped by the finnicky control system. There’s an attempt to copy flight simulator mechanics here, making the flying and racing games more complex than they need to be. If you happen to lean a little too hard on one direction, you’ll be thrown widely off course and if you miss one of the hoops you have to fly through, you’ll be chucked back to the beginning of the race. Dancing is fairly straight forward, where you mimic the actions of another bee. It never properly feels like you’re grooving or communicating, more just following basic button prompts.

Once a task is complete, the game will abruptly cut to an animation or another part of the level. It’s off-putting and adds to the some of the initial confusion that comes with layout of the hive. Navigating the hive is a maze of madness, with pitch black tunnels that make traversal confusing and tedious, meaning you’ll often get lost. When you’re out in the open world it’s a little different as you can finally see what is going on in the world. 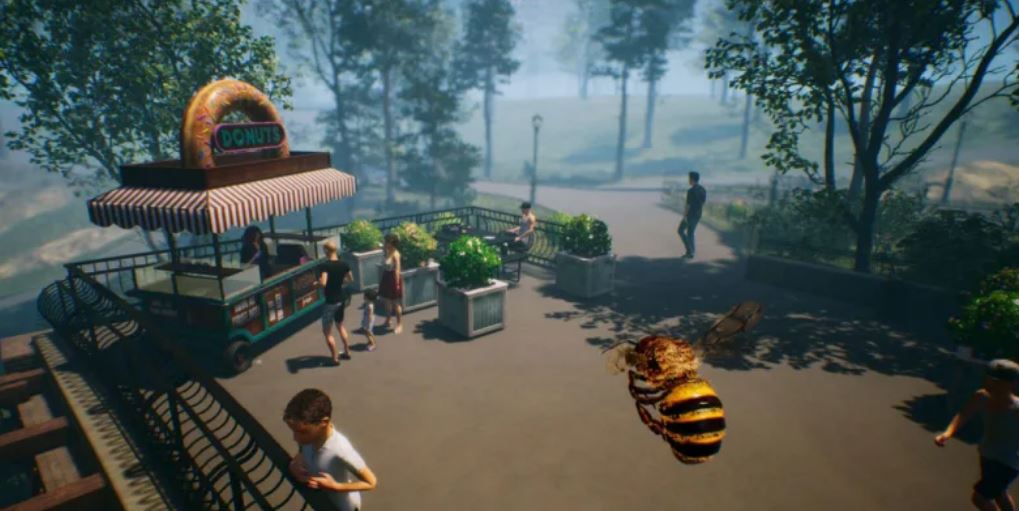 It’s here that the best part of Bee Simulator becomes evident. For all the complaints about average gameplay and the weak narrative, Bee Simulator at least looks brilliant. Vibrant colours bring the park to life, with luscious flowers and greenery making the world a real joy to spend time in. The creature designs of the bees and the foes you go up against are detailed and genuinely impressive. It’s also nice to see the pollen that you collect on your travels build up on your body like an actual bee would have.

Unfortunately, this visual vibrancy doesn’t cross over to the sound design. Characters are given overly twee voices that are more than a little on the nose, but at least they skew towards the family friendly aspect of the game. But this is contradicted by the lack of bee buzzing sounds, making it difficult to properly immerse yourself in the world of bees. This might make sense if there was a note about bees not having ears, but I didn’t see such a thing pop up in the loading screen info slides. This does raise the question of how dedicated a simulator Bee Simulator wishes to be – ok, so you have such fidelity to the life of a bee that you have it so that we can’t hear their buzzing because they can’t hear, but then bees have mastered cross species communication? 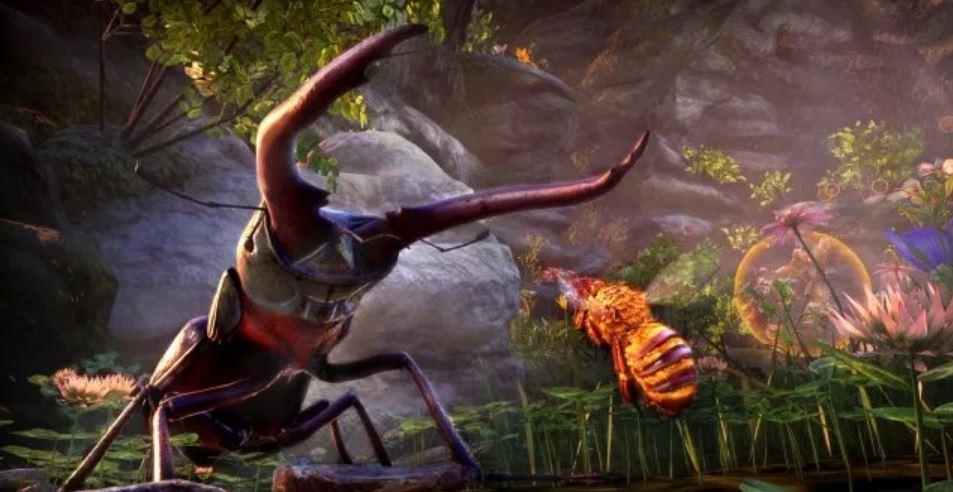 Bee Simulator does have up to four player split screen co-op play, where you do get to engage with areas outside of the main game, but this is non-competitive play and feels extraneous rather than essential. This is a real shame because given the immense ‘family aspect’ of the game, this is the one area that could have been a real treat. Instead, it’s another letdown in a game full of letdowns.

I guess I shouldn’t complain, given the wealth of satirical ‘simulators’ out there, at least this one goes part of the way to immersing you in the world of bees. But, that’s the biggest issue with Bee Simulator, it wants so badly to be an educational game while being an actual game at the same time, and it never manages to make both elements work. I’d hoped that this would be the modern equivalent of the undervalued Wii game, Deadly Creatures, but with added awareness of the plight of bees, but alas, it’s not to be. This is as middle of the road as it gets, and that’s a genuine shame. I can only recommend picking this up at a heavy, heavy discount.