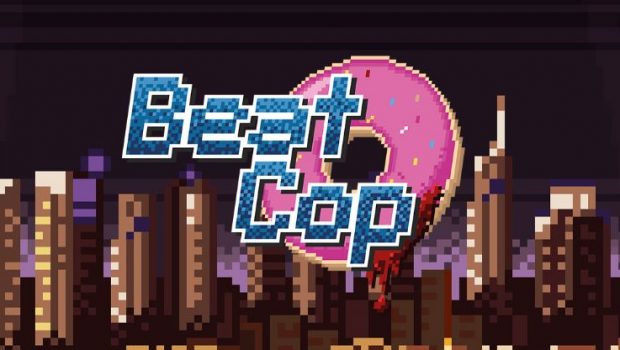 Summary: Beat Cop is a game that still works and it works well!

Beat Cop is an older DOS based game that has been directly ported to the XBOX, albeit with remastered sound. This game can still pack quite a punch even for a port.

It’s the 1980’s and you play an Detective who fell from grace in a scandal right out of a Hollywood-type scene, there are missing diamonds, a raunchy video of you know what, with a political figure, and you just happen to be the guy that they are trying to pin it on. So from both sides, you are blamed for stealing the diamonds, or for making sure they come back – or else! 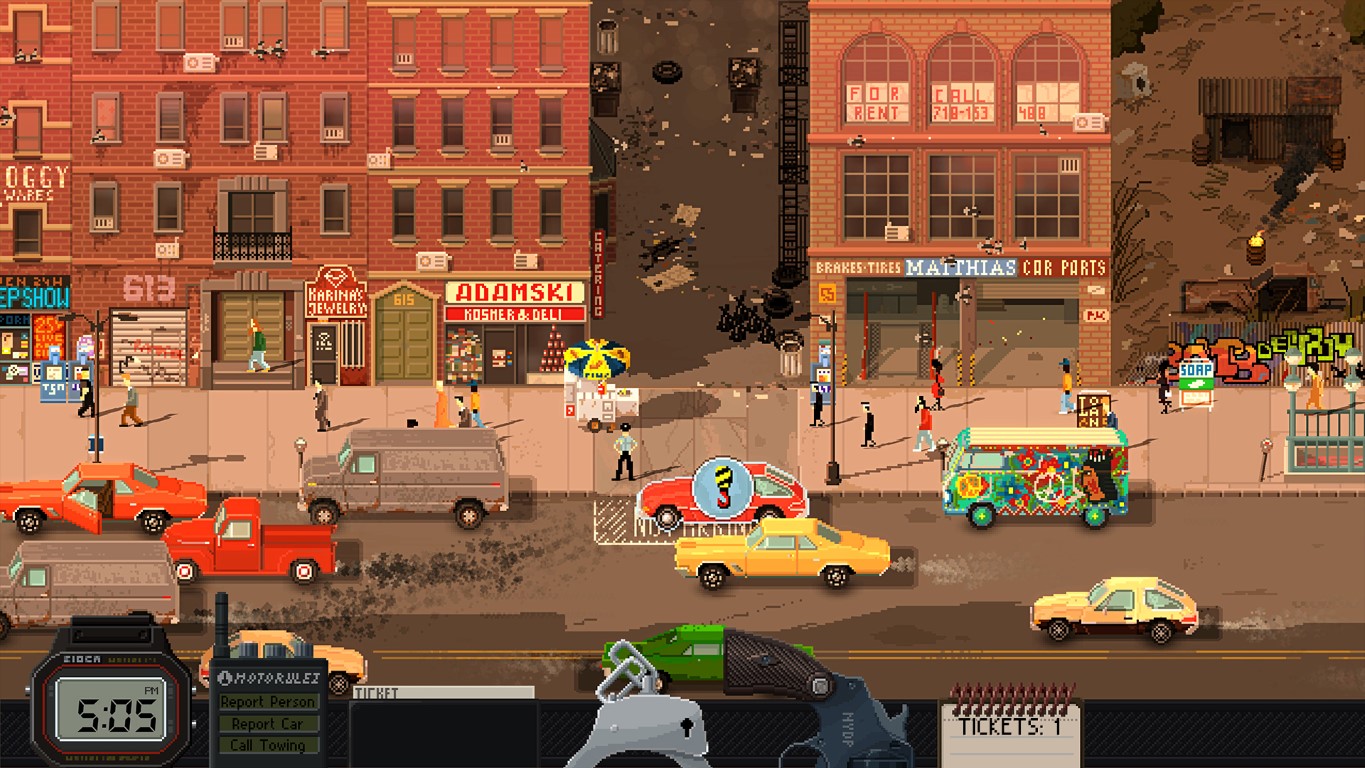 Because it’s all apparently your fault you are busted down to patrolman, and must now walk a beat, hence the name Beat Cop.

I would point out how realistic this plot is, especially when compared to today’s climate. The political corruption, major theft, an innocent person being blamed and possibly fired; or the police response of suspending, demoting or placing on alternate duties pending investigation. 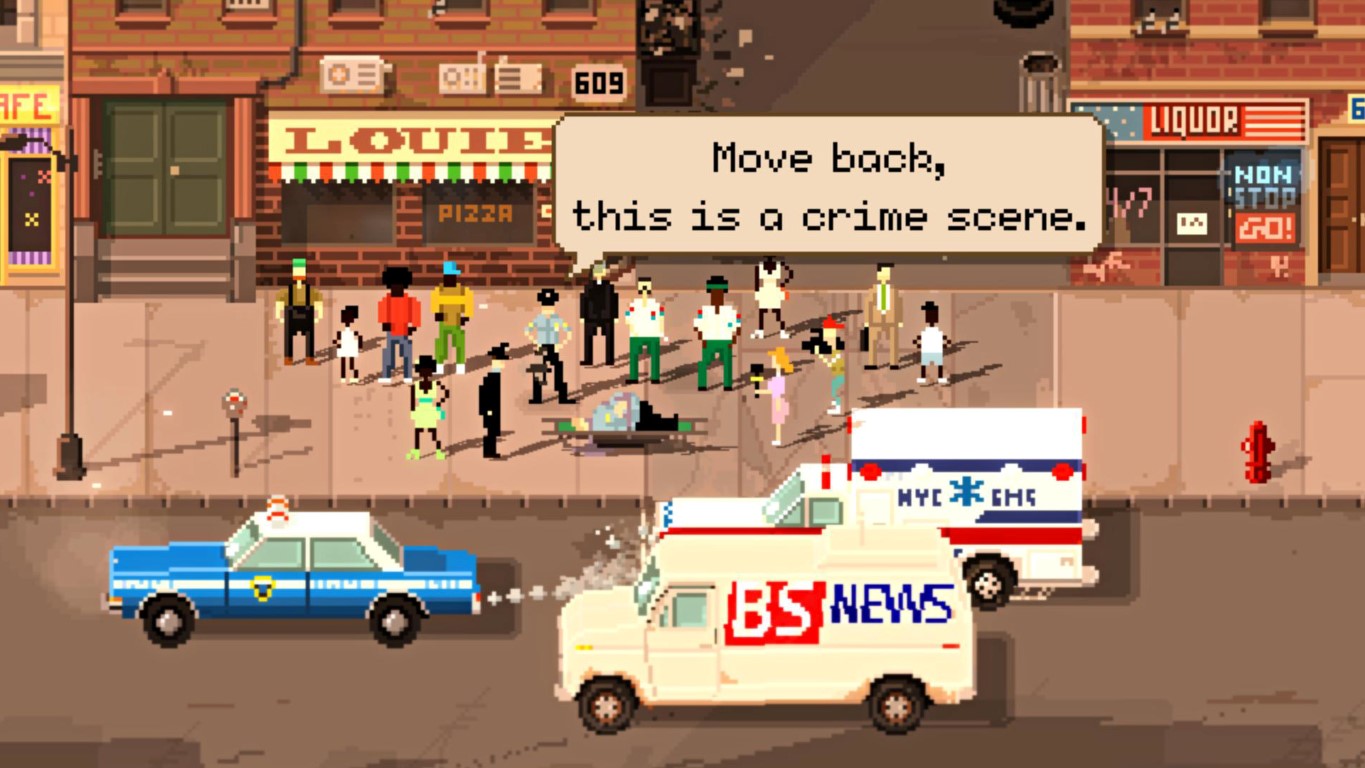 The game has you going through episodes progressing through the main story-arc day by day, starting with a briefing from the sergeant. The dialogue will have you in stiches and is a great example of the 80’s before political correctness, trigger warnings and safe spaces, with the cops slagging and baiting each other, and in no uncertain terms telling each other where they can stick you know what! You then travel to your beat, which is a long street and you must contend with almost all kinds of situations on your street, ranging from offending vehicles to domestic disturbances, religious cultists, suicide and murder victims, hookers and drug dealers.

Each day your assignment will change. Congratulations you have a quota, and on top of your quota, you have to respond to crimes and radio despatched assignments, sometimes conflicting with each other. Oh and if you don’t quite meet your goals, you’re pay will be docked – and guess what, your now ex-wife wants most of your pay check, make sure you deliver! (Again, parallels with real life perhaps?) 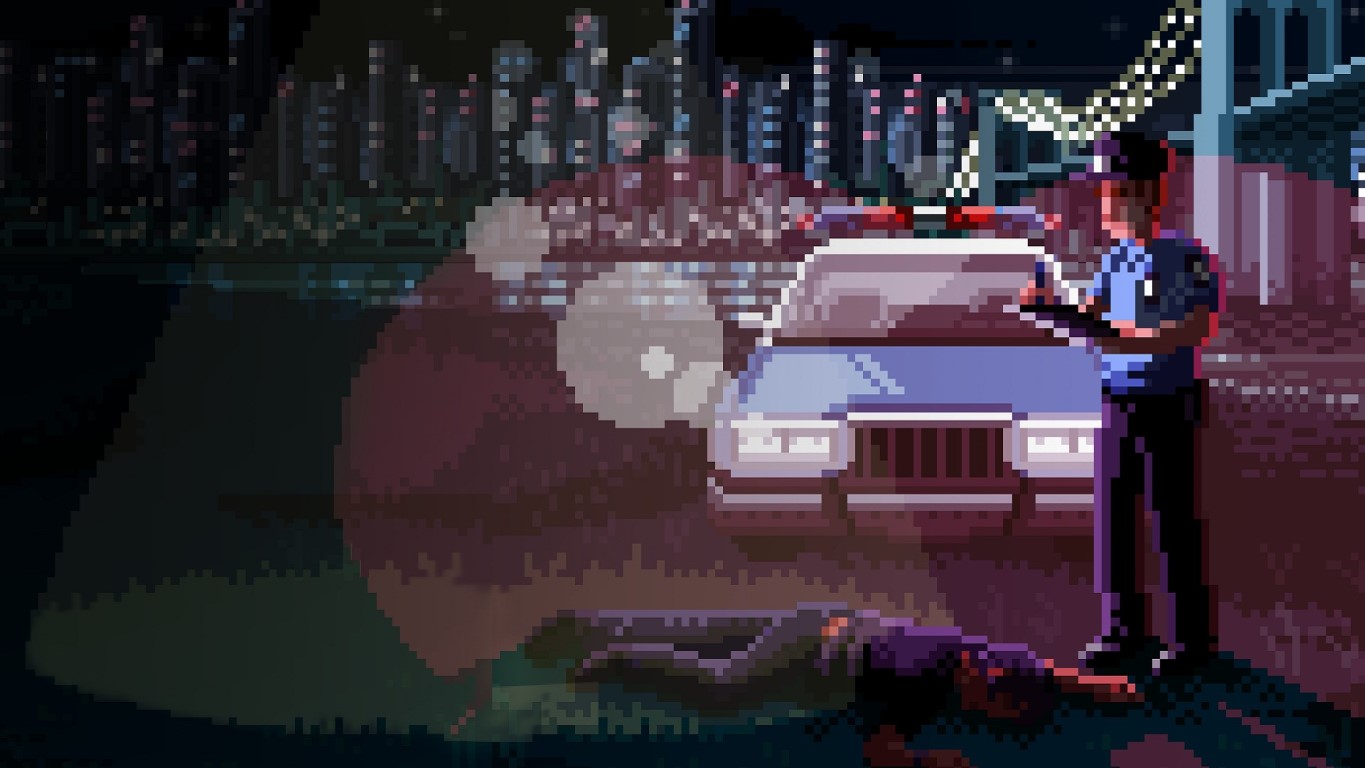 The game is not so simple though, whilst challenging you with simple errands and parking ticket quotas and chasing down offenders, you are challenged from multiple angles from the factions. You have the mafia, the (black) street gang, the citizens and the police, and you have to keep a delicate balance between all three, otherwise a hit will be ordered and before too long a little girl may lure you down the ally and you are shot to death. The challenge isn’t just the balance; it’s also doing the right thing. After all you are a cop, but will you be a dirty cop on the take? Rather than writing tickets you pocket the would-be fine? Or do you turn a blind eye to drug deals and illegally search cars for the mafia?

Each decision you make when speaking with the criminal factions, directly influences your reputation amongst them. If you keep arresting the mafia and the gang members, ignoring the dodgy deals, you will make enemies really quick and get shot, how bad is bad? Well if the percentage hits around 80% you will start to have serious trouble – trust me. However, the citizens and police will love you, conversely if your sergeant finds out you’re on the take or you keep missing your targets, well you might just lose your job anyway. This kind of forces you to skirt the ‘grey area’, or perhaps find ways to just ignore conversational dialogue so you can’t increase or decrease the reputation either way.

If you die, you can restart the entire day over with a fresh approach, and you won’t find the exact same day twice in any play over. The dynamic tasking is randomised, and the game presents different interactions with NPC’s based on your reputation with them. Not bad of an old game!

The quality of this game on the Xbox is outstanding; the movement is smooth and natural and feels like the game was originally made for the controller. The sound is great too. The graphics are, as the developer intended, and that’s perfectly fine. 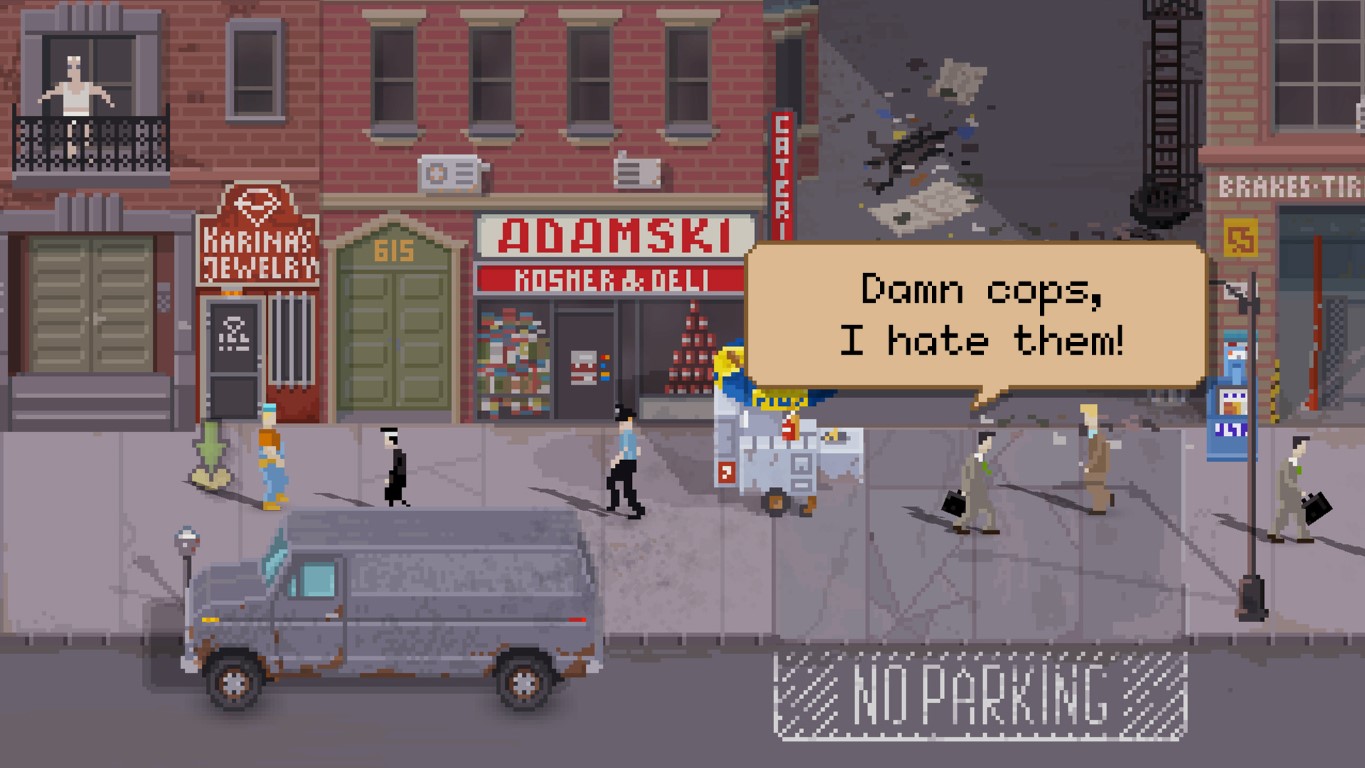 I do wish to warn players though; if you are currently or have ever been a cop, you will either love or really hate this game. If you are sensitive to political correctness, easily triggered, uncomfortable with coarse language, or some political and racial overtones as was common at the time, you may want to give this one a miss. But for everyone else, give it a play, it’s actually really fun. 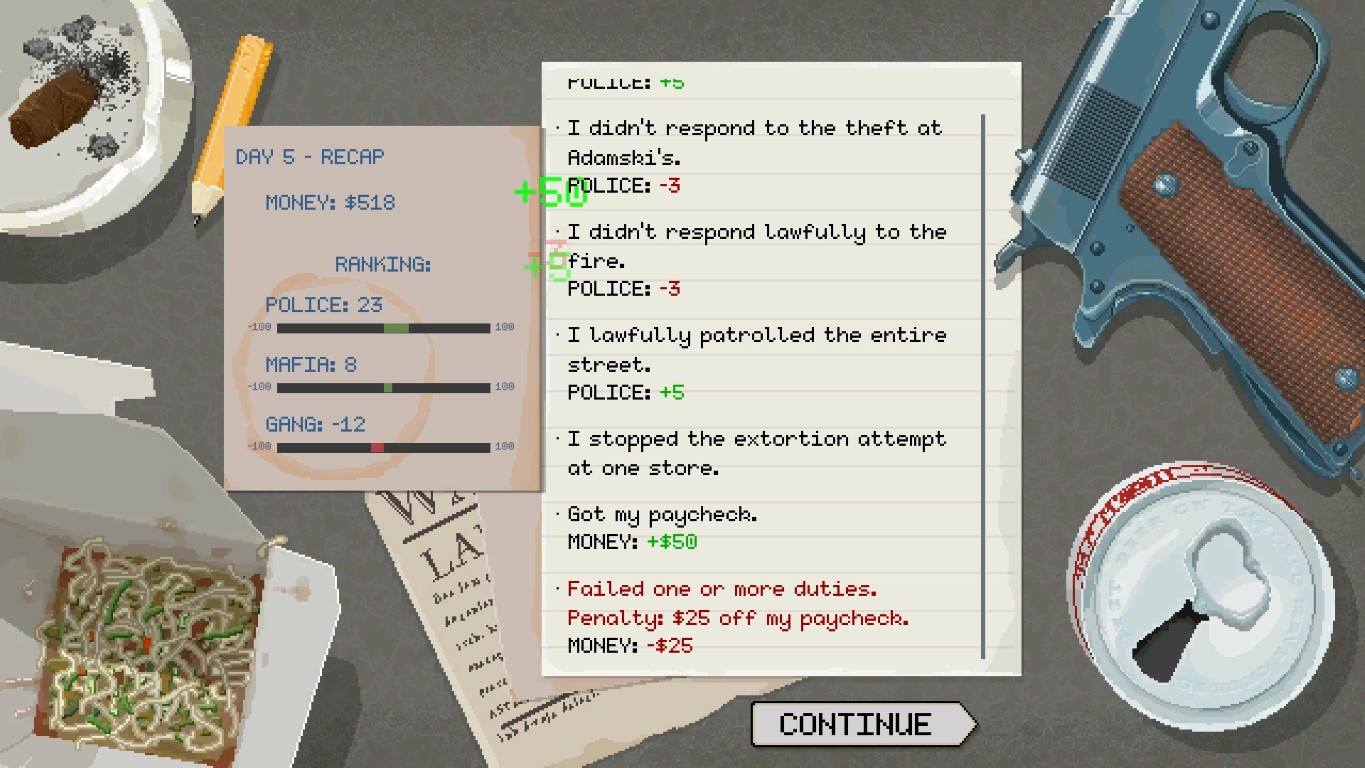