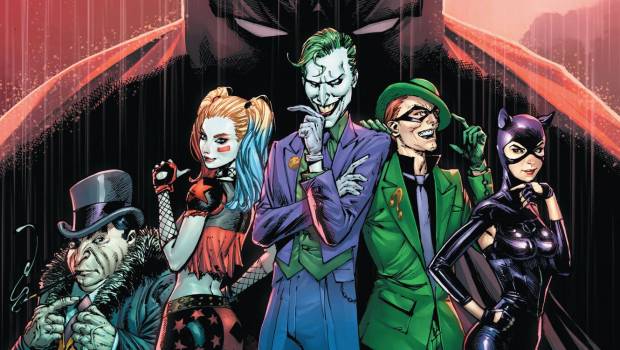 Summary: Someone is targeting the rogues' gallery of Batman's adversaries as part of a larger plot and he has to get the help of his former enemies to solve it.

The enemy of my enemy...

The Penguin stumbles into the ER, bleeding from stab wounds and says Batman just threw him out of this car. Someone is targeting all the big villains in Gotham city and Batman is trying to track down who is behind it.

This reminded me of the plot for Batman: HUSH somewhat but it is a different story as there are some other characters involved in this. For once the villains are being targeted by assassins instead of Batman and no one knows why.

Seeing as this is the third reprint of this title it must be a popular story and I can see why as there is plenty of action in this title and all your favourite characters including Catwoman, Harley Quinn and others.

Even though this is a continuation of a wider story I did not feel like I was missing anything in just this part of it as it seemed quite self-contained and it does make you want to keep following it to see how it works out which all good series should.

I would say this was half way between the Warren Ellis Batman and the 1960s TV show in terms of style as the villains still wear colourful costumes but it is also dark and gritty which is more the style these days. I did enjoy the art style in this and the characters are drawn well.

If you are a fan of Batman you would probably have this already but I would recommend it if you have not seen much outside of the movies and animated series before also.