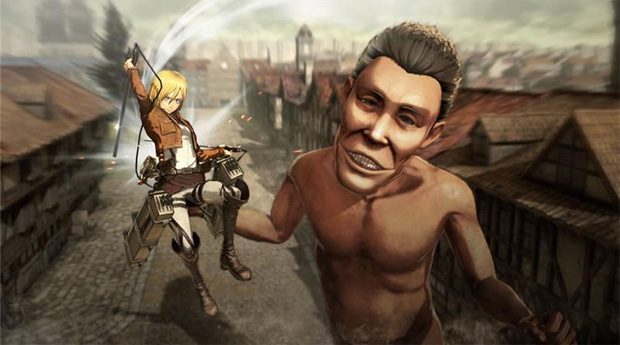 Attack on Titan: Wings of Freedom Xbox One Review

Summary: A familiar feeling, incredibly addictive, accurate depiction of an anime that took the world by storm.

Wings of Freedom, the symbol of the fierce Scout Legion, the perfect subtitle to the video game rendition to a highly regarded and now well-known animated series, the story follows the events of the first season of the anime, and it follows it quite well I must admit. Eren our main character is a very curious child and together with his best friends, Mikasa; the wise, cool headed adopted sister and Armin; the shy, scared tag along, wish to see the outside world, of which is plagued by a scourge that preys upon humans, Titans.

Giant humanoids who appeared 100 year prior and only consume human flesh, the humans, now living behind giant walls too tall for what was thought to be all titans, until a fateful day when a titan known only as the colossal titan, standing a massive 60 meters tall, just barely enough to be seen over the top of the wall, appeared and destroyed a portion of Wall Maria, the first of three walls that protected their city. Titans of all sizes poured in an wreaked havoc in the town at Shiganshima, located just behind wall Maria, among the casualties was Eren’s mother, upon her death Eren vows to eliminate all titans in existence and thereby joins the 104th Trainee Squad and then subsequently after his first transformation into a titan, he transfers into the Scout Legion. The story follows him, and all the friends he makes and loses along his journey to eradicate all the titans so that humanity can reclaim the land it once flourished in. 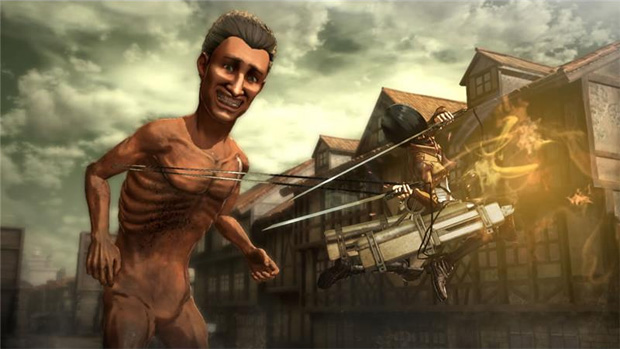 The game instantly feels familiar to anyone that has ever played Koei’s games previously, most notably; the Dynasty Warrior series. The control schematic is very similar and the play style is also quite similar in the sense there are always numerous enemies and allies on the field, typically with a singular objective but with many side missions available to complete for a higher rank upon completion, the animation is smooth and fluid which allows for veteran players of the style to easily pick up the controller and feel right at home and the schematics are laid out in a very user friendly way so that even someone who hasn’t played the style of gameplay before can learn quite quickly and without too much hassle. The menus are easy to navigate, the story is descriptive and accurate and barely gets in the way of the gameplay, the story feels much more immersive than other games of its class. 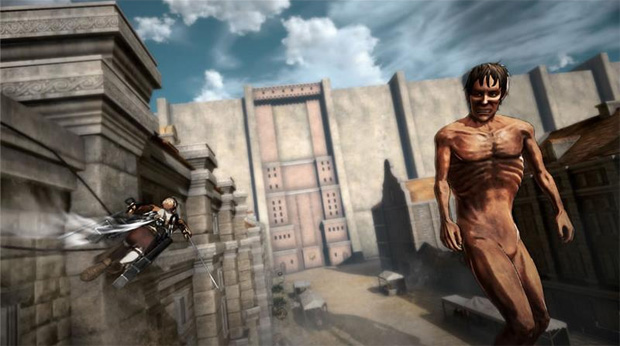 The soundtrack is relatively accurate to the anime, but also includes the kind of music used in previous Dynasty Warrior games, which deducts points overall but still feels right at home because it works for the action that’s going on in game, it’s similarly paced to the action and brings out a bit of the players excitement when certain tracks kick in as the bigger, more difficult enemies appear in game, which wins those points back. The cast is very much the same as those in the anime and they deliver their lines impeccably, I was really impressed, you could barely tell the difference of the audio quality between lines delivered in anime as opposed to in game, the background noise is great to, the sound of the gas as you boost, the blades as they carve into titans or fail to do so, they all work and they complete the audio, soundly. I actually have little to say against it, to be completely honest. 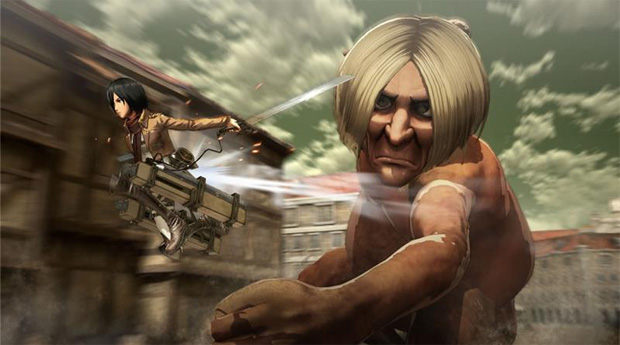 Video quality, this was a little hit and miss for me. I loved it, but at times it got a little too much. The characters are well designed, they look the same as they do in the anime, the background art is great too, it really depicts just how rural the villages are, however the 3D aspect kind of throws me off, I know for a game’s perspective to animate it similarly to the anime would be extremely difficult and likely filled with a lot of bad CGI that I’m very particular about when it comes to all forms of animation, but it doesn’t sit right with me because I come with the expectation for it to look as similar to the anime as possible. Not only that, but the destruction physics of buildings and such also irritate me a little, sometimes they work just fine and other times it can get a little janky and it just kind of kills the mood a little bit, especially if you just finished a kill move and half of it was blocked out by falling debris that wasn’t filtered out. But that’s just my opinion and overall it’s not a deal breaker as the content and story far surpass those issues. 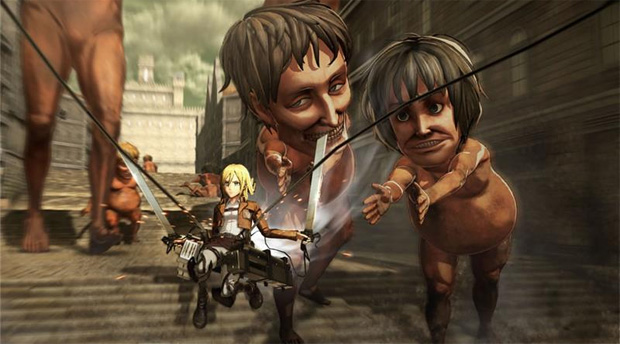 In conclusion the game works very well because the style of play is what Koei does best, and that’s just the kind of developer this game needed, I’m very pleased with the game as a whole, Attack on Titan was a very anticipated series which meant it had high expectations, this probably deducted from my overall enjoyment of the series, however the game definitely reignited that fire by making it immersive and putting you at the center of the series, I found myself totally addicted to playing the game, despite occasionally being bogged down in mission ranking and items gathered screens after each mission and the slightly overdone dialogue that was probably a little bit more than necessary. I only tore myself away from the game once, and that’s a high score in my books, definitely worth looking into, definitely worth buying, but perhaps not worth the $90 price tagged slapped on it, $60 would be the go. Overall though, a pleasure to play and to review also.

Fight to the Death Against Massive Titans!
Fight in a violent and relentless battlefield where the situation constantly changes from moment to moment. Every strategic decision you make will link directly to new and exciting action. A new breed of hunting action that combines a high level of tactical freedom with the thrill of taking on Titans alongside your comrades-in-arms!

Titan Slaying Action Combines “Omni-Directional Mobility” with “Severing of Limbs”!
Using the “omni-directional mobility gear” created specifically for battle with Titans allows you to fly freely across and above the battlefield. Close in with Titans at high speed, weaken them by severing limbs such as arms or legs, and then sink your blade into the weak point at the nape of their neck!

Battlefield Drama on an Epic Scale!
It is the duty of the Scout Regiment, to which Eren belongs, to travel beyond the Wall and expand the territories of mankind. Experience exciting drama unfolding across a battlefield that changes in real-time. The destruction of buildings when fighting in the town will also change the range of actions available to you.

Cutting Edge Graphics Bring the Attack on Titan Story to Life!
“Custom Toon Shader” – the latest graphical fusion of anime and game styles that uses physical rendering brings the rich Attack on Titan world to glorious life! Eren, Mikasa and all your other favorite characters can rmove freely across vast areas. Based on the storyline from the animated series, experience Attack on Titan like never before 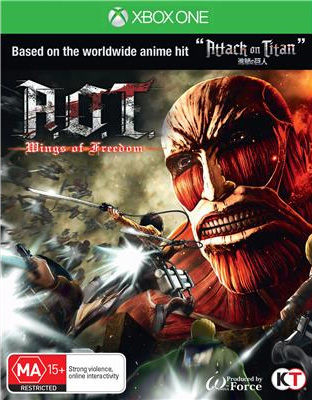