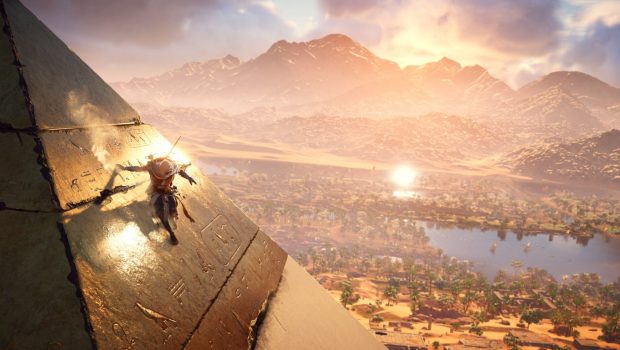 Summary: Assassin's Creed Origins is a breath of ancient Egyptian fresh air to this once slightly stagnant franchise!

The Assassin’s Creed franchise has had its ups and downs over the years, however Ubisoft have taken a step back from the series in order to ensure that their latest incarnation is not just another rushed attempted at the legendary war between Assassins and Templars. As a result, we’re introduced to Assassin’s Creed: Origins which gives players a much more refined and original experience as it goes back to where it all began. And if you’re a lucky Xbox One X owner, you’ll be treated to the nicest Assassin’s Creed graphics in history thanks to 4K which also boasts some insane attention to detail as you commence your adventure in Ancient Egypt. 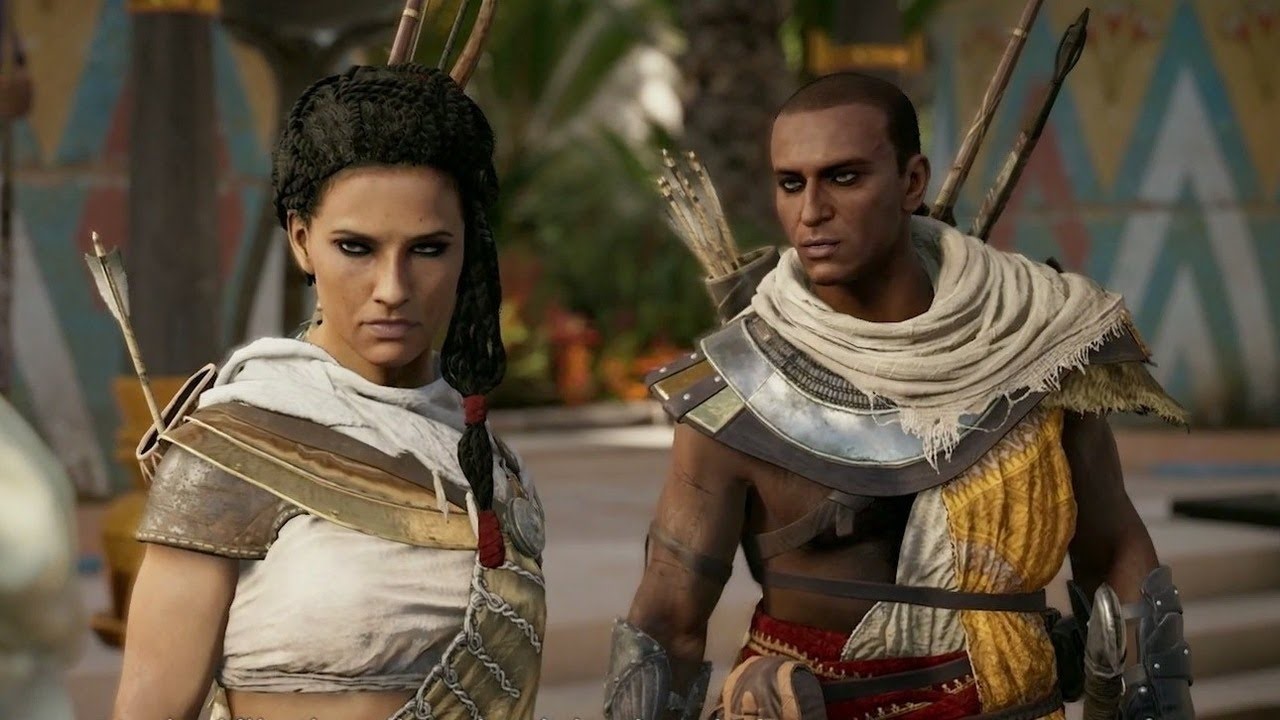 The story of Origins revolves around protagonist Bayek of Siwa who helps keep order in his province as a Medjay. However his relatively peaceful life is shaken to the core when the Order of the Ancients arrive to steal the ancient artifacts held by the Siwa people and to make matters worse, their power leads back to the Ptolemy empire.

So when the dung beetle literally hits the Ancient Egyptian fan, Bayek’s hand is forced and he becomes the catalyst to what will one day be known as the brotherhood of Assassins. Complementing this character is his wife Aya who helps ground Bayek and exploring this relationship is one of the highlights of this story as it makes it more real and less cliched or forced. 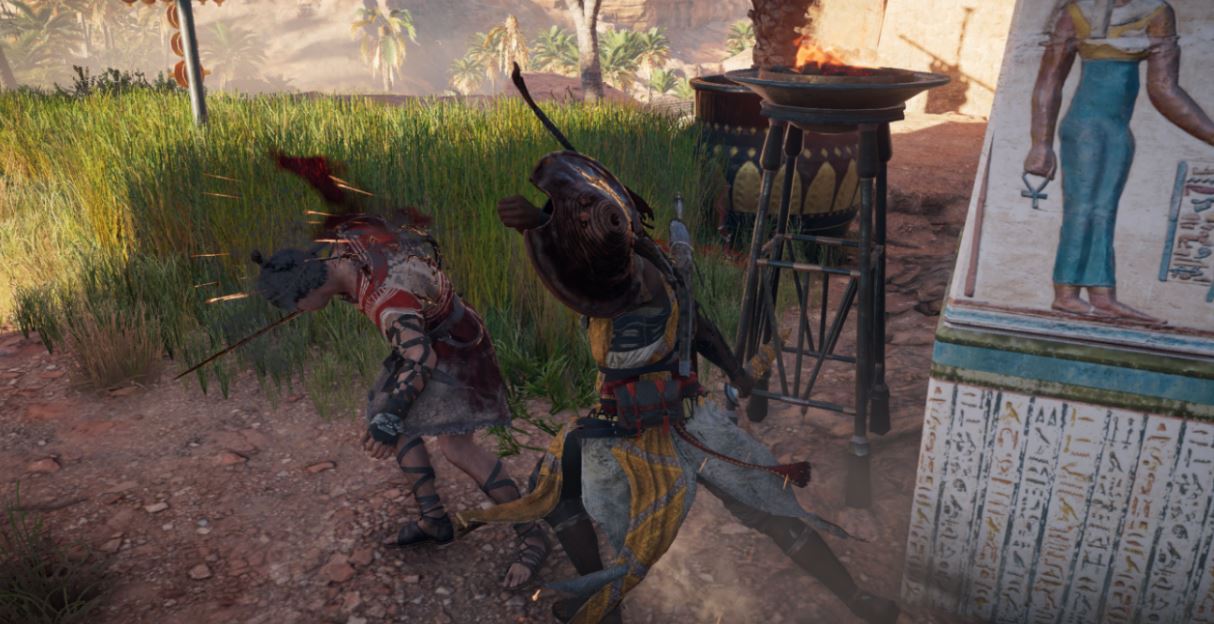 The story is also progressed with some very impressive cutscenes that all channel their inner Ancient Egypt theme, not to mention interaction with historical figures such as Cleopatra and Julius Caesar. I could also watch the cinemas all day on the Xbox One X which has this true blockbuster feel to them.

There’s also an element of RPG in Origins that gives you points once you complete certain objectives like missions and assassinations which can then be used on the skill tree that includes warrior, hunter and seer. At its basic level, warrior allows you to upgrade your combat prowess, including tailored attacks like shield charge. Hunter focuses more an ranged attacks, even with a bullet-time (which looks thoroughly amazing) shot with bow and arrow. And finally Seer which is like an alchemist as you can create new poisons or bombs, including the taming animals. 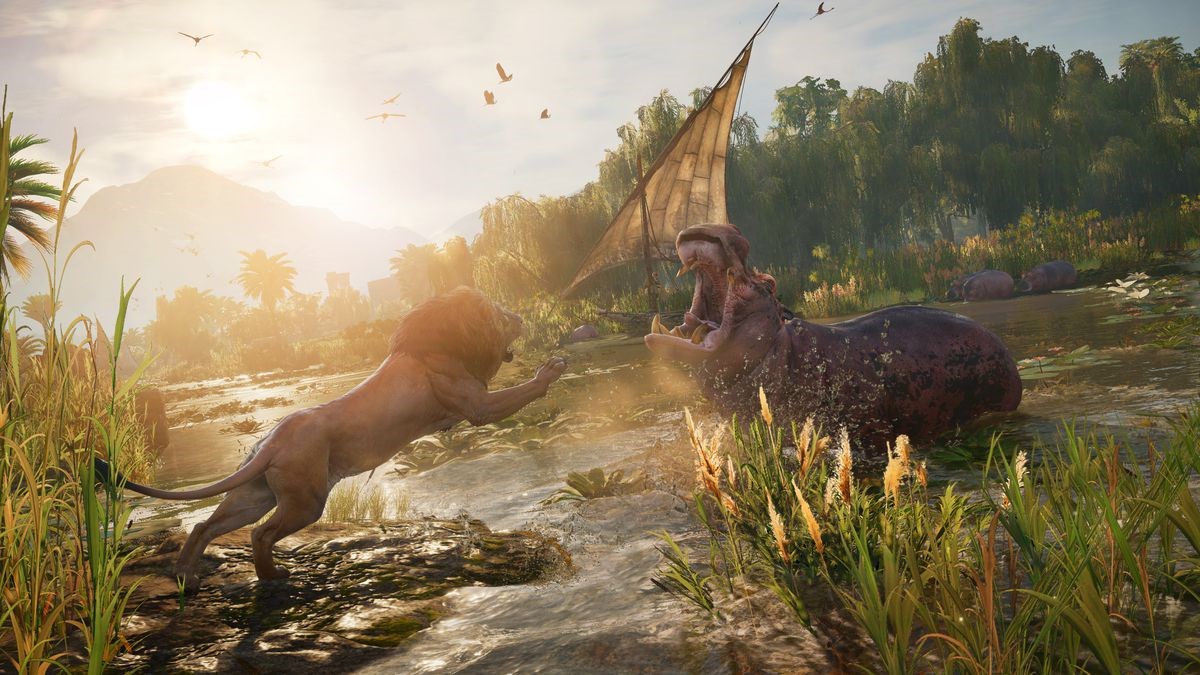 My favourite class was hunter because of the access to the various bows and abilities that would make both Robin Hood and Green Arrow gush with envy. Also, the crafting element of Origins is quite decent which allows Bayek to fine-tune his weapons such as increasing their damage or carrying more bows. These upgraded weapons can even be sold and even taken apart to make new items. 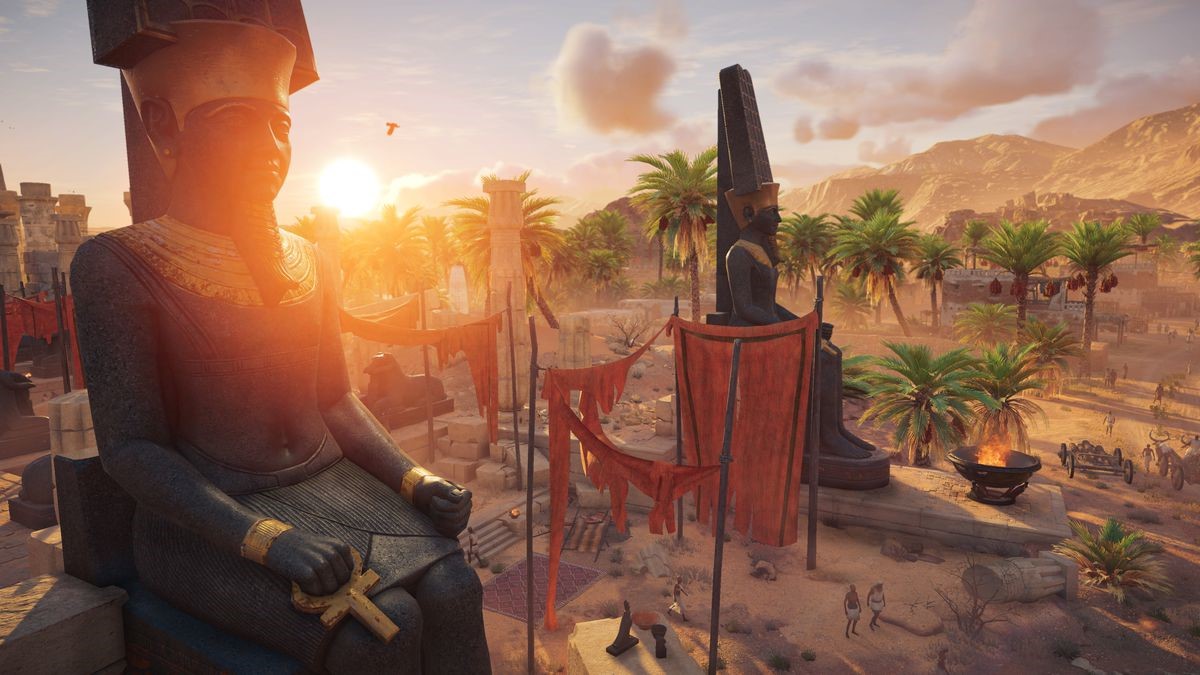 Furthermore, there are puzzles to be found written on papyrus and if you can solve these clues, it will lead you to a destination where you can find treasure and other bonuses that serves as a nice distraction. Although there are main quests in Origins, there’s plenty of side quests as you help the other denizens affected by the ‘new’ world order that is slowly coming into play. 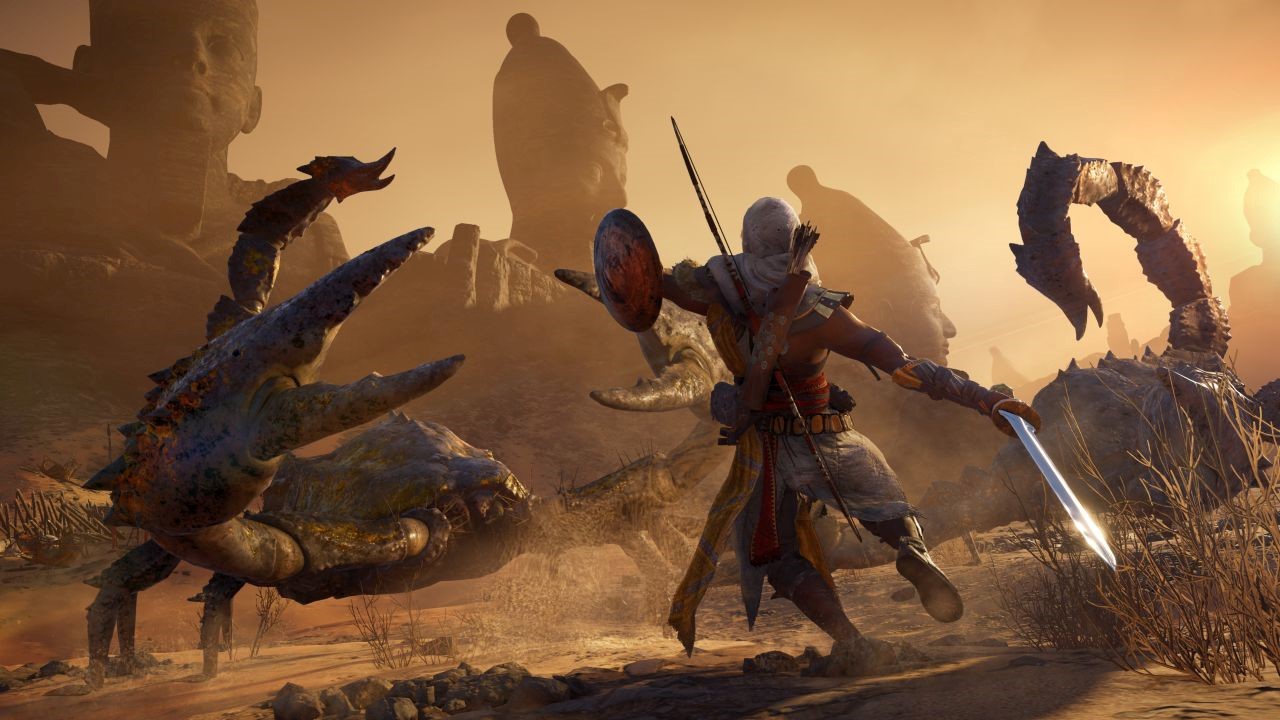 With that said, Origins does involve quite a bit of stealth as you sneak around and take out the enemy. When you do face the enemy directly, there is an element of rock, paper, scissors but thankfully you have a wide variety of weapons (there’s lots), both melee and ranged plus different speeds and damage.

For example, the bow and arrow is great for taking targets out in the distance or you can use your trusty knife or even bombs and darts to dispatch those pesky minions of the dark. All in all the combat works well, even though it can be a little clunky at times when you’re facing multiple targets. 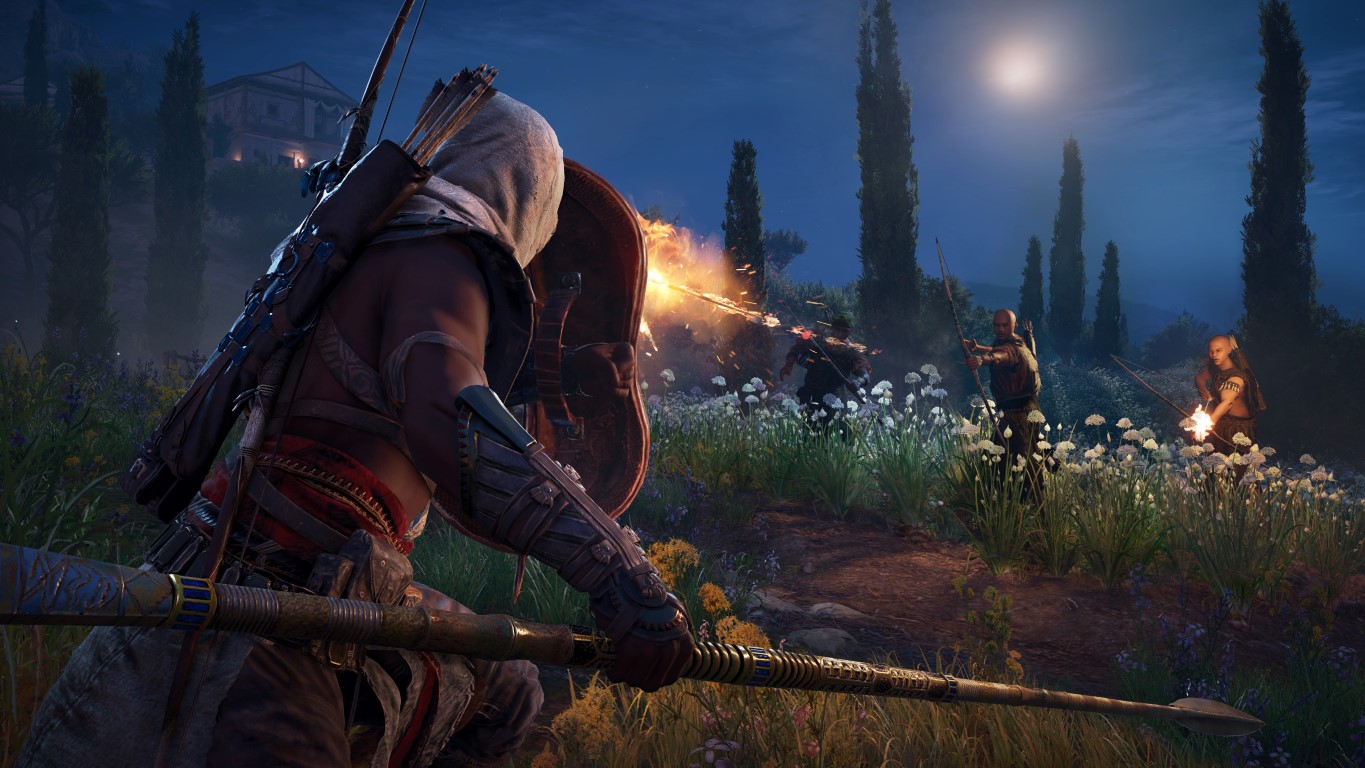 The control system is well mapped on the Xbox One X controller as you fight, parry and climb your way to victory. I also like the inclusion of the analog stick to lock onto a target. Another new element is an adrenaline bar that rewards the player on their combat skills and when filled, you get special bonuses such as Fury that also slows down time or overpower which increases your damage.

Level design in Origins is spectacular and the developers successfully channel that Ancient Egypt aspect and being a wannabe Egyptologist myself, not to mention visiting Egypt when I was 18, it’s a great experience on the Xbox One X, particularly with the 4k graphics. Also the gaming world in Origins is massive and there’s plenty to see and do in the game when you’re not taking out the enemy in classic Assassin’s Creed fashion! 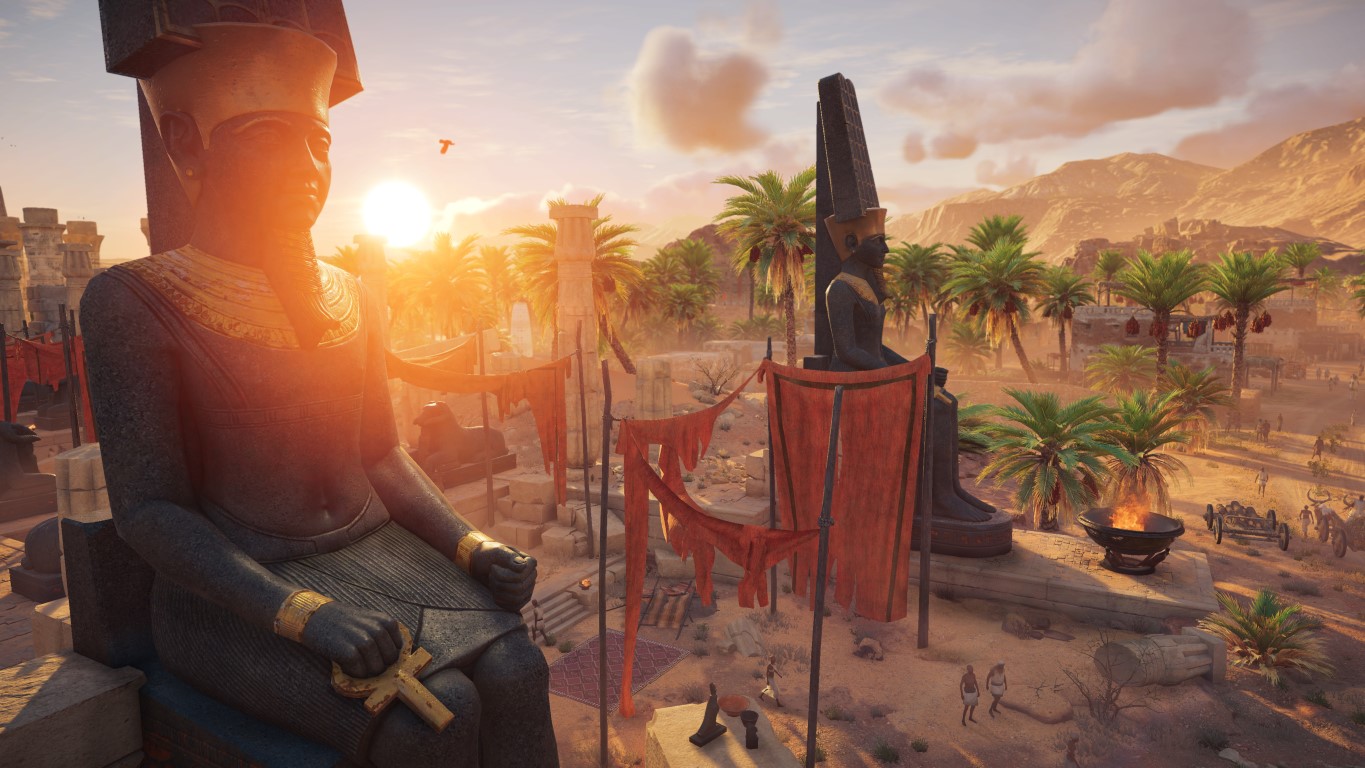 Add in birds flying in the sky and a variety of native animals to the region such as crocodiles or elephants and the world of Origins is a living breathing entity. However there are some graphical stutters here and there and hopefully Ubisoft will release a patch to address this.

Like other Creed games, this title is set in the real world, although with some artistic liberty of how it may have appeared all those years ago but nothing is more fun than exploring the Nile, visiting the majestic city of Alexadria, walking through deserts and of course, seeing the Great Pyramids of Gaza. It’s brilliant and there’s so much to see and quite a bit of diversity with all the areas that you can explore that just enhances the overall gaming journey. 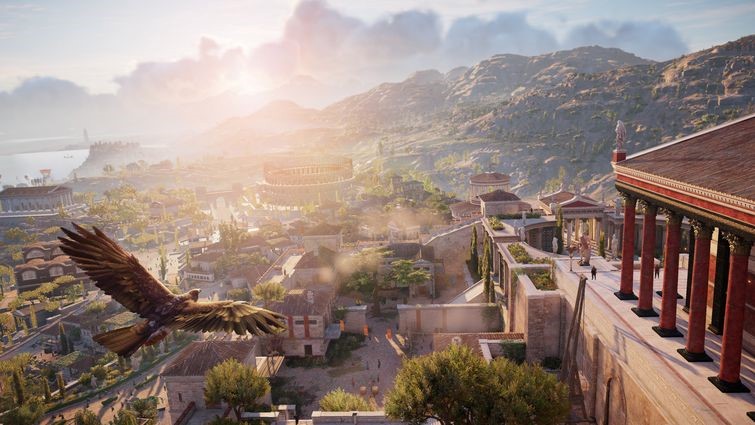 Completing the game is the professional voice acting, the ever-changing music and all the sounds of this ancient time that when combined with the graphics and gameplay creates one of the best Assassin’s Creed games since Black Flag.

In conclusion, Origins successfully adds to the franchise of Assassin’s Creed by delivering something fresh yet similar. It plays like a treat on the Xbox One X and thanks to the 4K graphics is easily one of the most immersive titles as you explore Ancient Egypt and its connecting lands.

The main protagonist, although no Edward Kenway is still interesting and really allows you to invest in them, especially their plight. Add in a better combat system and overall better mechanics  then previous games and Assassin’s Creed Origins is a very refreshing return to the franchise and Ubisoft should be commended in this as you visit the Ptolemaic Egyptian Empire with around 30+ hours of single-player campaign fun.

A Full Country – From deserts to lush oasis, from the Mediterranean sea to the tombs of Giza,  Fight your way against dangerous ancient factions and wild beasts as you explore this gigantic and unpredictable land.

Rebuilt Combat – Experience a completely new way to fight as you loot and use hundreds of weapons with different characteristics and rarities.

Memorable Quests – Dive into a new adventure every time you play, with each quest telling an intense, emotional, and memorable story. 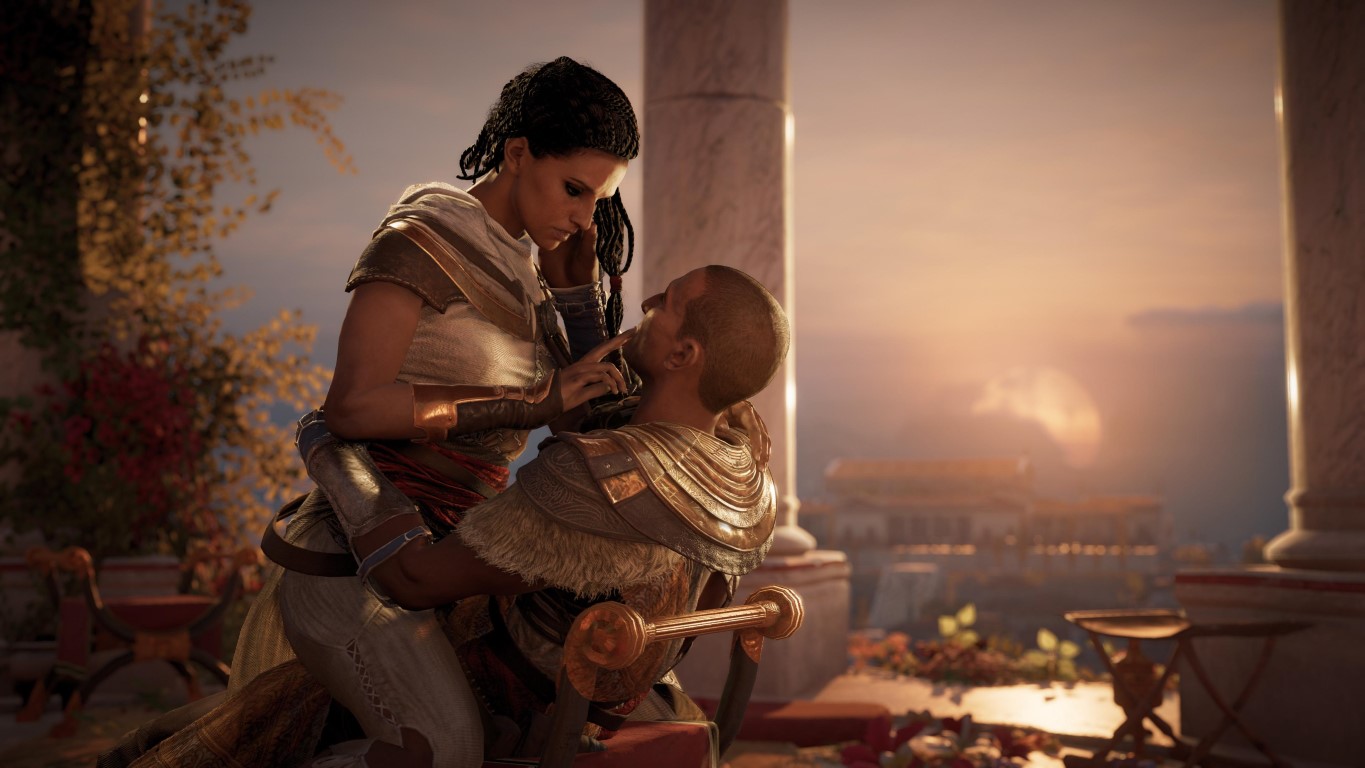