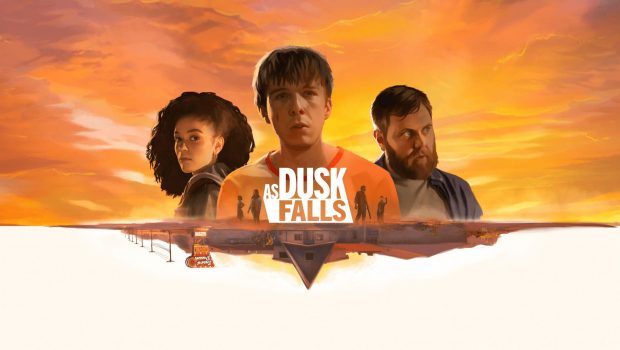 As Dusk Falls is an original interactive drama from INTERIOR/NIGHT that explores the entangled lives of two families across thirty years. Starting in 1998 with a robbery-gone-wrong in small town Arizona, the choices you make have a powerful impact on the characters’ lives in this uncompromising story of betrayal, sacrifice and resilience. Drive the lives and relationships of multiple characters in a decades-spanning story told across two intense books.

As Dusk Falls is a very different game to what you may be used to. The play style incorporates point and click with dynamic action sequences that, let’s face it can often be so annoying in these style of games; however the dynamic mashing and up and left interactions form part of the story telling and can prove to be quite challenging.

What you need to know at this point is that this game is incredible. Not only is the story truly nuanced and challenging to the players sense of morality, but the decisions you make early on can shape, and reshape your choices and outcomes.

As Dusk Falls presents you with a number of observational challenges that need to be recalled some time later when the player least expects it. Sure enough if you are sitting on the couch and going through the motions, you will likely miss out on alternative avenues of how the story may have unfolded.

And then, there are the characters. Wow, the characters, the characters, Wow! Professional accomplished actors play the leading roles and the performance is outstanding. Whether intended or not, the cast and the dynamic flows so well that you cannot come to any other conclusion than to think that they truly are a real family, especially the Holts.

Each character has a fully fleshed out backstory with cross relational elements that is revealed as the story and the game unfolds. What is truly a mark of quality here is that the player is not left with loose ends, or any doubts of the final outcome of each of the characters, which is great to see.

There are two special features of note.

Because this game was reviewed prior to release, these features were not tested. There is a level of entertainment value here, where a group of friends can choose to weigh in on the decisions and enjoy the game together as a group.

Each player can participate by including their vote for the decision and the consensus by majority is chosen.

Decisions are timely and must be chosen before a timer runs out, passing the controller or obtaining consensus in a larger group will form an even greater challenge. Maybe a bunch of couples at yours one night?

Passing the controls around in a group can give everyone a chance to do the Quick Time Events (QTE’s) which is also a great way to pass the fun around.

For the Twitch streamers there is also broadcast mode which allows you to stream to your fans and have them weigh in on the voting.

For a full rundown of these features, see the FAQ.

The graphic style here incorporates a kind of stop-motion style reminiscent and perhaps more commonplace during a movie production. The background elements such as waterfalls use continuous looped animation, the marriage of which is fresh, unique, and a welcome change of pace to the stock-standed high end graphics, or poorly rendered indie games that we see too much of today.

Behind this style of animation is the true actors performance as the character animation has been modeled on the actors themselves.

There is a sense of simplicity and intrigue by this use of simplified animation, whereby all distractions are set aside and only the elements that form the story and enrich the characters are presented.

Beyond the characters, there are some really great elements in the background that are well done. We get to see the family homes, the forest, and some picturesque landscapes.

As Dusk Falls, have proved that when done right, the most simple and humble graphics can be the most impactful. 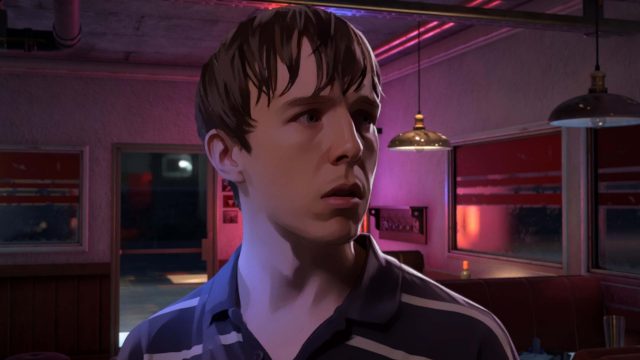 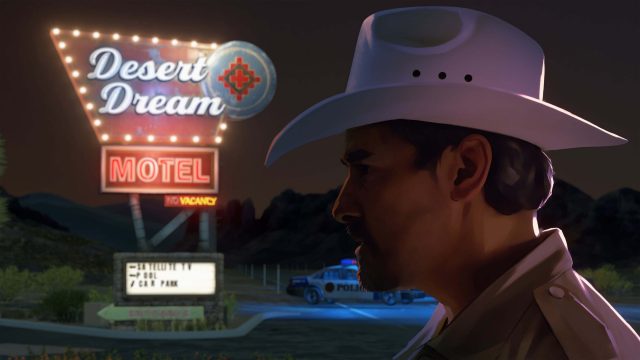 The soundtrack is strikingly captivating and intense when you expect it to be, and mellow and lulling at the right times. The intro theme is well suited, and upon a first play through, the soundtrack just gives the Hollywood movie impression.

During action and intense moments all of the supporting Foley artistry is there. Thuds, bangs, water, creaking of the steps, the mobile phone buzzing away and the sound of traffic and sirens. For all respects, consider the audio to be as full and rich as a full feature film.

The voice acting is simply perfect. No question. In many games there are moments where dialog may not quite fit, or where the moment is lost, timing fails or some other moment that just simply doesn’t work, but in As Dusk Falls, each decision and consequently each dialog change is indistinguishable as being a choice you made and is delivered as though it was all a single take.

The actors’ performance in delivery of their lines, regardless of the choices and differences, is perhaps the reason why this game is such a stand out.

In this reviewer’s opinion, there is almost nothing to dislike about this game. If anything, it would be the delay at the beginning whilst the game menu loads up and the transitioning to the start.

At the end of this game, you are satisfied that the story was well told and your choices are validated, and then immediately you want to play it again!

Are your characters moral? Make good choices for the best outcome for themselves or others? Did you remember that key piece of information needed to solve that problem? These are all avenues for exploration and collaboration with friends.

As Dusk Falls, exceeded all expectations and brought something new and refreshing to the table. Well done to INT./NIGHT

Summary: As Dusk Falls exceeds all expectations and is a thoroughly enjoyable and entertaining experience for single and multiplayer alike.