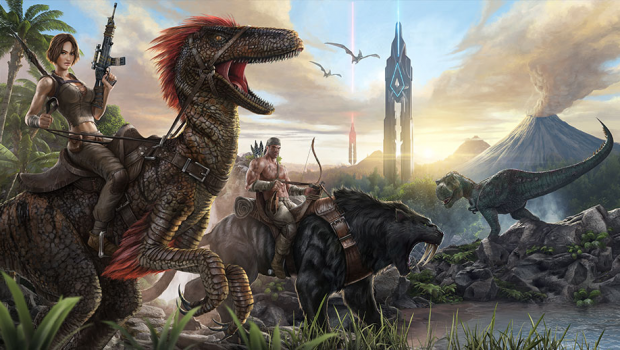 Summary: Ark: Survival Evolved has more bugs than the grill of a Mack truck and your first introduction to the game can feel akin to the sensation of being hit by aforementioned truck, but peel away the layers of abstruse game mechanics and you’ll find a strangely compelling game that’ll make you feel like the Pope of Dino-Town at times and want to open a vein in a hot bath at others.

ARK: Survival Evolved was probably the harshest introduction to a game that I’ve ever experienced. With little in the way of a tutorial or mission markers, I was dropped onto an island with nothing but my wits and scavenging abilities and tasked with surviving in a harsh and unforgiving environment.

Oh, and did I mention that there’s Dinosaurs? Once sufficiently geared up you can capture and tame these beasts and populate your home base with all manner of prehistoric beasts. 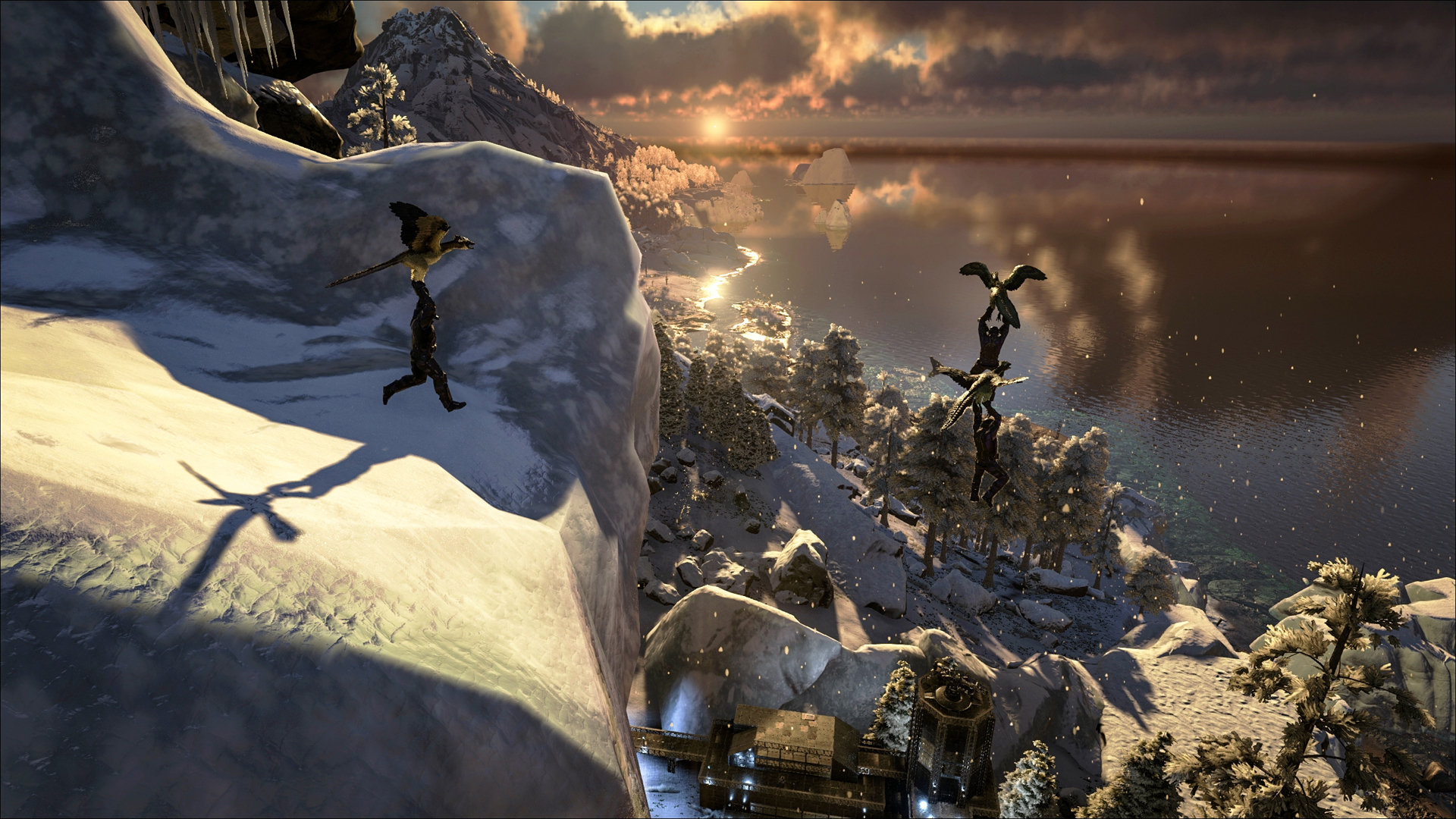 Before too long I discovered that the Dinosaurs weren’t going to be my main concern during my time with ARK, however; as is often the case, it can be your fellow players that pose the biggest threat.

My first character didn’t last too long before being murdered by an opportunistic bandit dinosaur, because apparently that’s a thing in this world. My second and third attempts were ended quickly after I contracted rabies from a particularly vicious Komodo dragon looking thing.

Characters four and five suffered the ignominious fate of drowning, the first whilst fleeing a sabretooth tiger and the second while attempting to plunder the previous character’s corpse; what made this experience even worse is that despite appearing to surface for air I still drowned both times as if still submerged. Whether this is a bug or an intentional gameplay mechanic, I’m not sure, but that exact question cropped up many, many more times throughout my tenure with ARK. 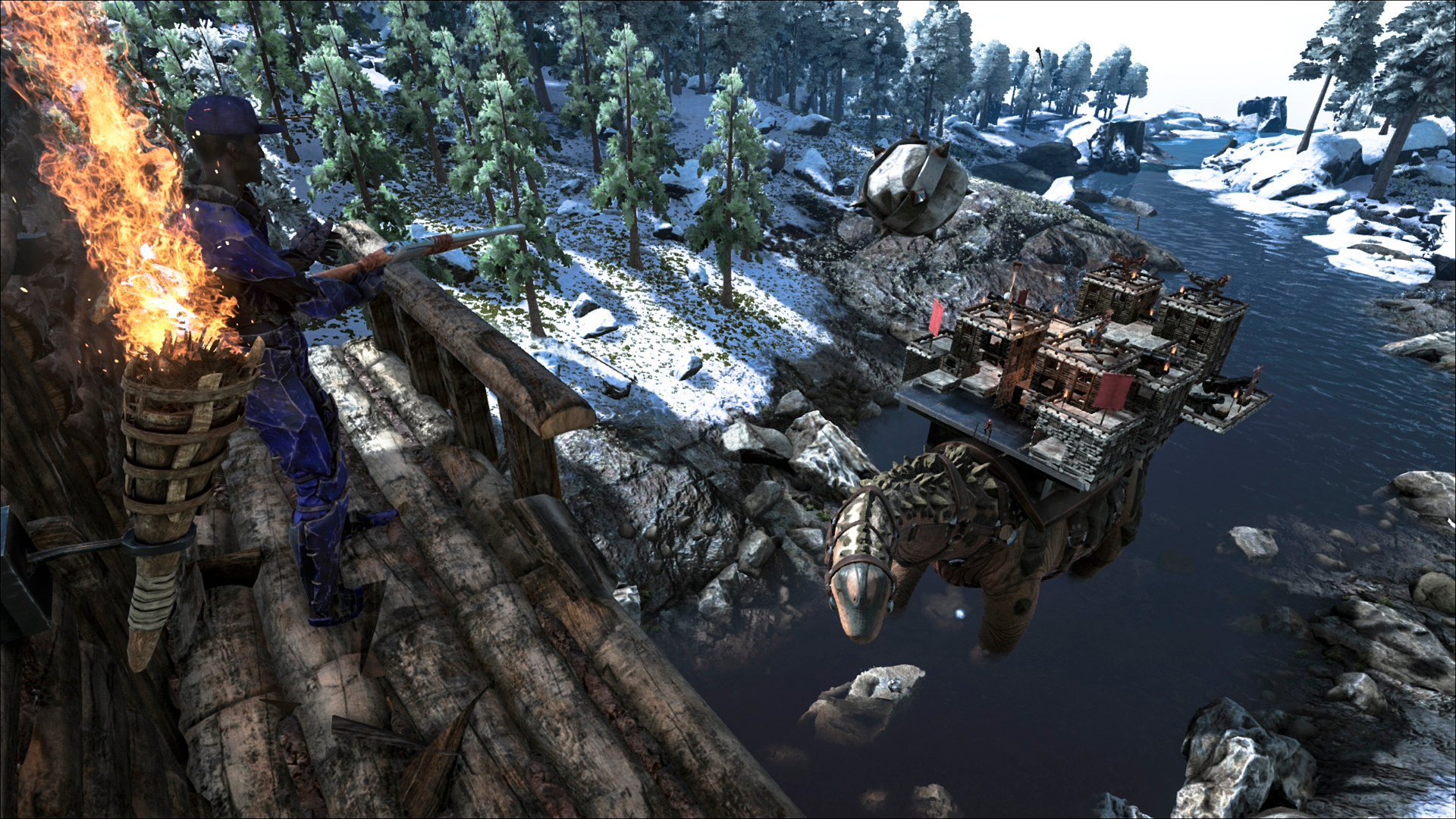 My sixth character, an obsidian dwarf with limbs like Popeye, fared slightly better and I had managed to scrounge up a decent supply of resources and craft a rudimentary shack with a campfire before logging out, only to find upon my return that my supplies had been pilfered.

It was then that the realisation hit me that the world of ARK, and by extension my character, are persistent and I started to slowly gain an understanding about the hardcore culture that has sprung up around the game, where clans rotate players in order to remain online at all times and either defend their resources or, conversely, pillage surrounding camp sites. 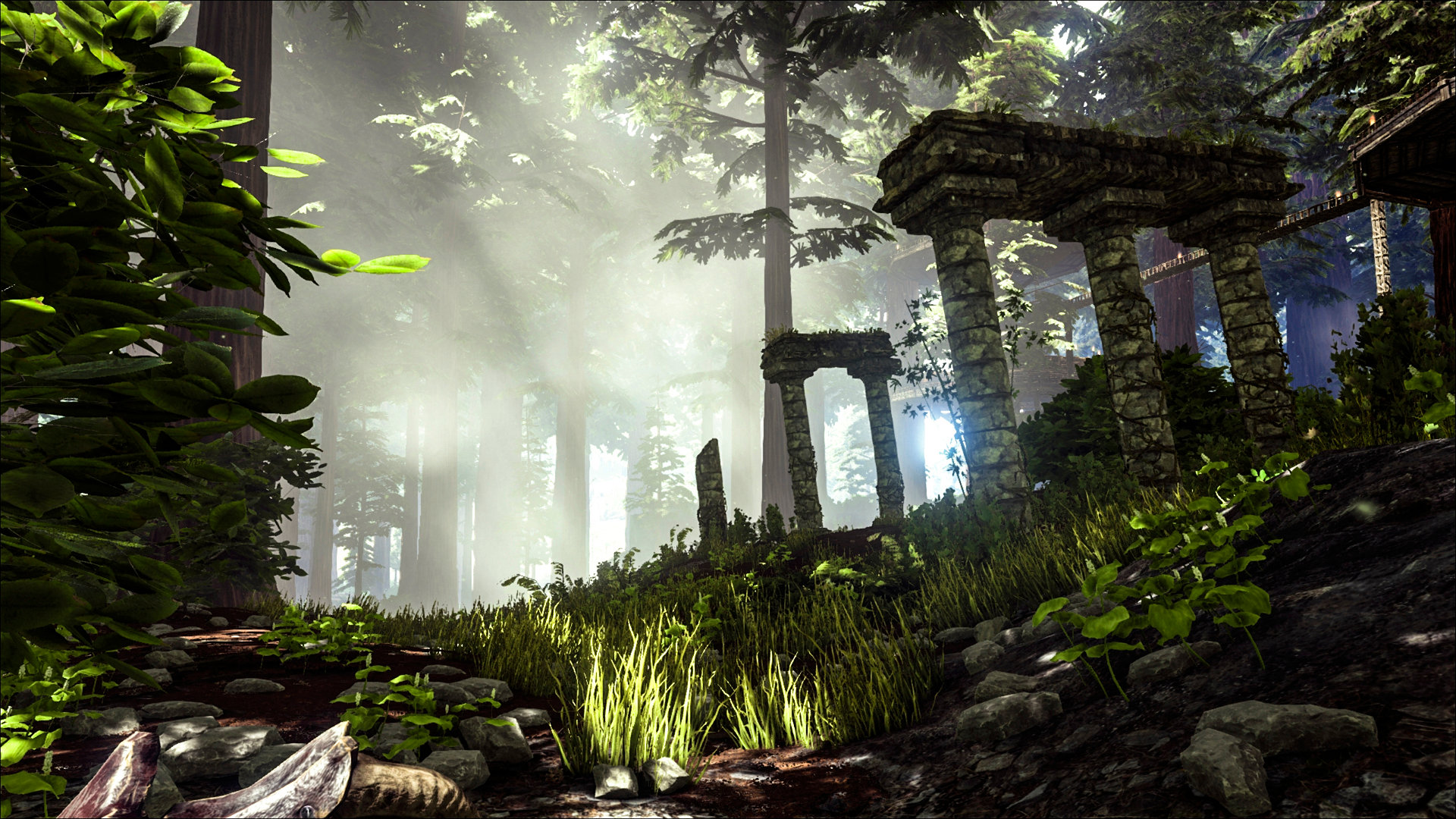 There’s no way on God’s green earth I’m ever going to be able to dedicate such a substantial chunk of my time to a game, so it was an immense relief to find that players can choose to play on either PvP or PvE servers and select whether or not their structures and supplies can be tampered with.

Naturally, I chose this option from this point on.

Oh, and did I forget to mention that the game has a permadeath mechanic which makes the entire in-game economy and fight for survival more cut-throat and desperate the longer you manage to stay alive? Yeah, there’s that as well. 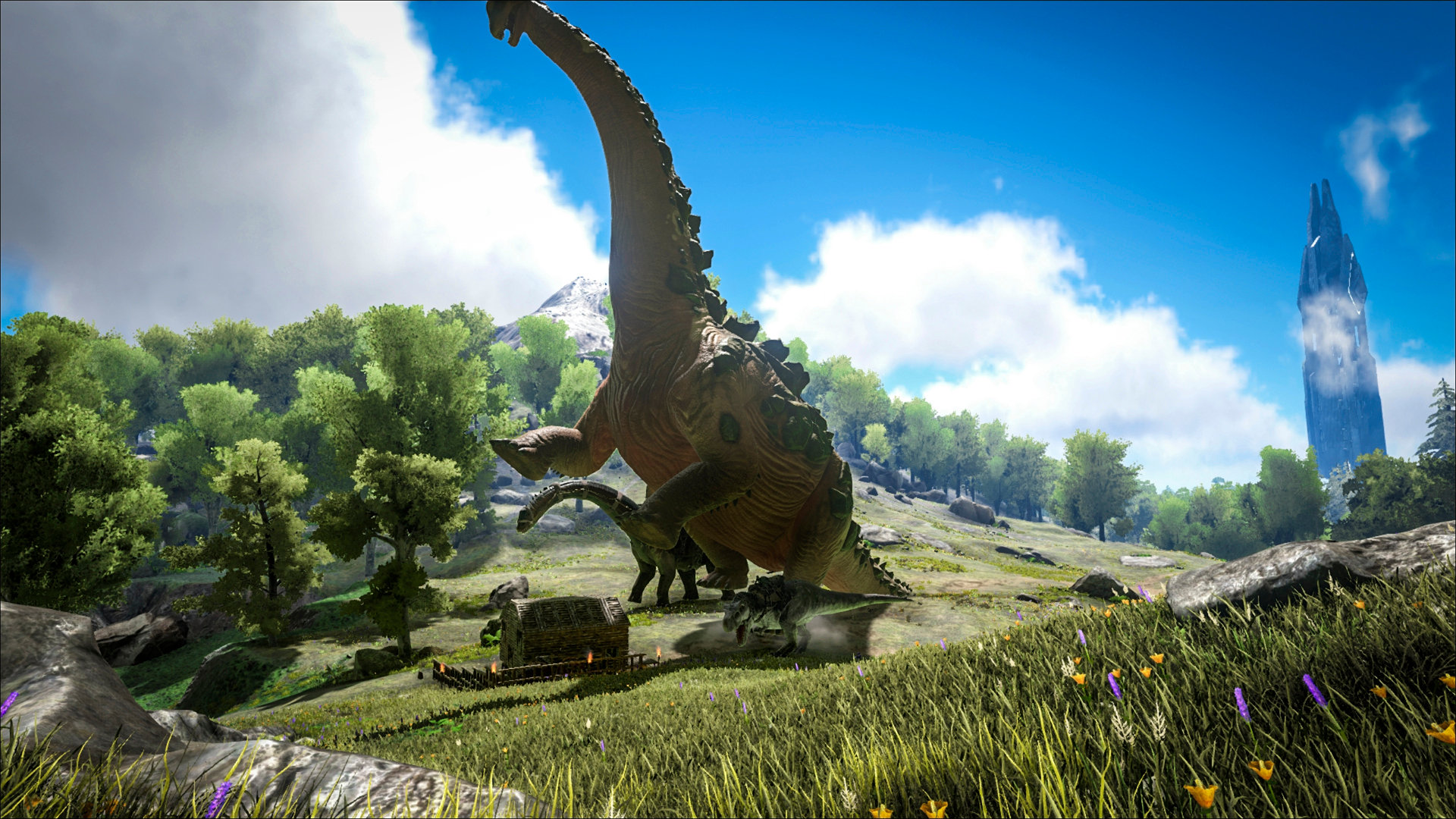 As you forage for berries and collect wood and stones, you gain stat points which, besides levelling up your chosen attributes, also unlocks engrams that serve as blueprints for different items you can craft, such as clothing, tools and more. These carry across so that having a slightly longer lifespan than a Mayfly slowly becomes viable but, if we’re being honest, I never felt like I was making enough progress in relation to the time I was putting in.

Despite this unforgiving and sobering introduction to the game, I’d be lying if I said that it didn’t reinforce my determination to perform better upon my next attempts and try my best to forge alliances with different tribes in order to ensure that I stood the best chance possible. 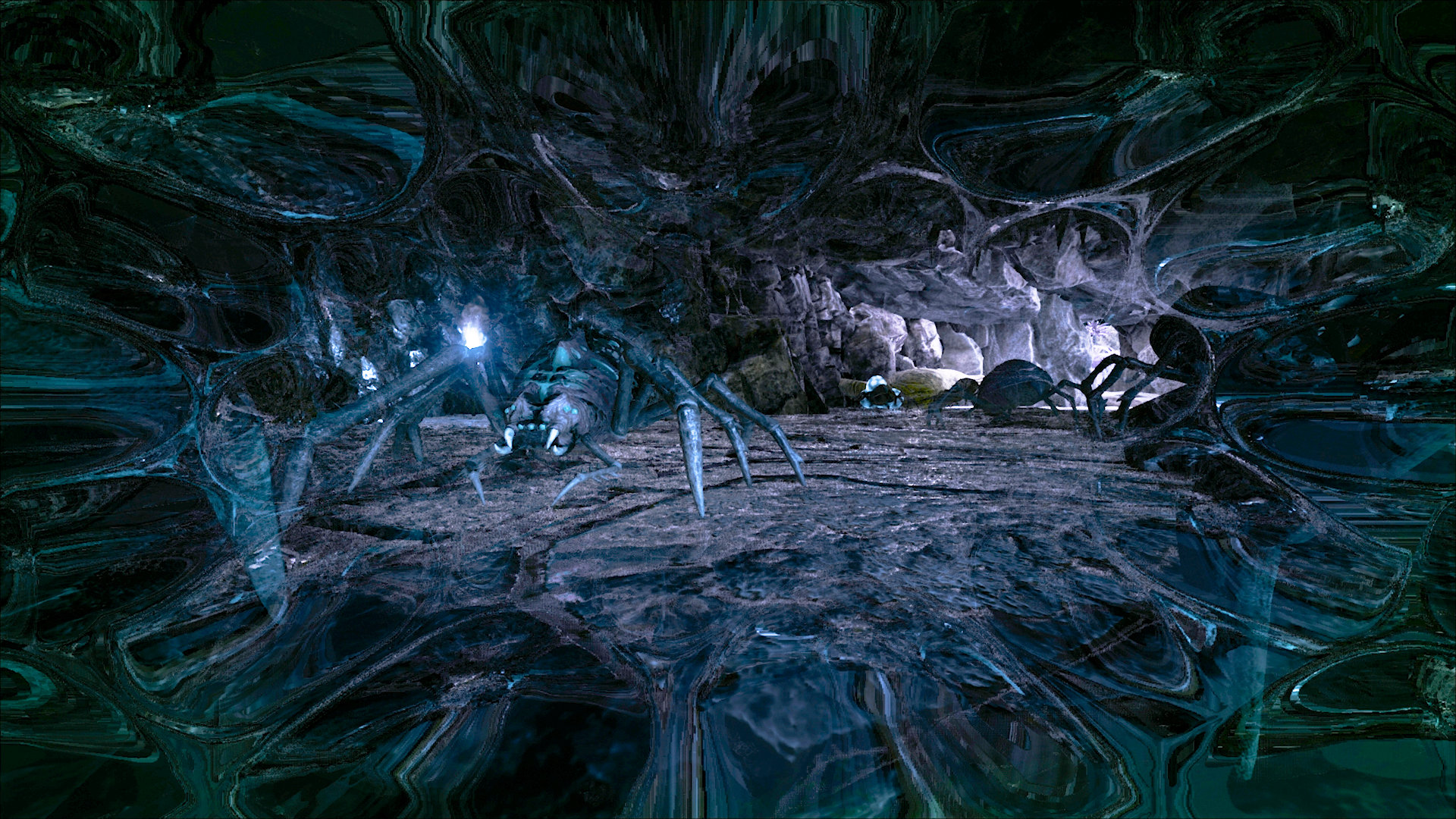 Unsurprisingly I failed miserably in this regard, but the increasingly longer journey between spawning and my eventual death became an addictive cycle that chewed up far more hours of my time than I’d like to admit.

After all, who can resist the chance to be a goddamned Dinosaur Whisperer?

The dinosaurs are nearly as formidable as your human foes, however, so it’s wise to exercise caution until you have amassed a healthy supply of resources and initially focus on gathering and crafting the necessary tools.

I’d wholeheartedly recommend giving yourself a bit of a primer on the core mechanics of the game to gain a better understanding of exactly what to focus on crafting before diving into the game proper. 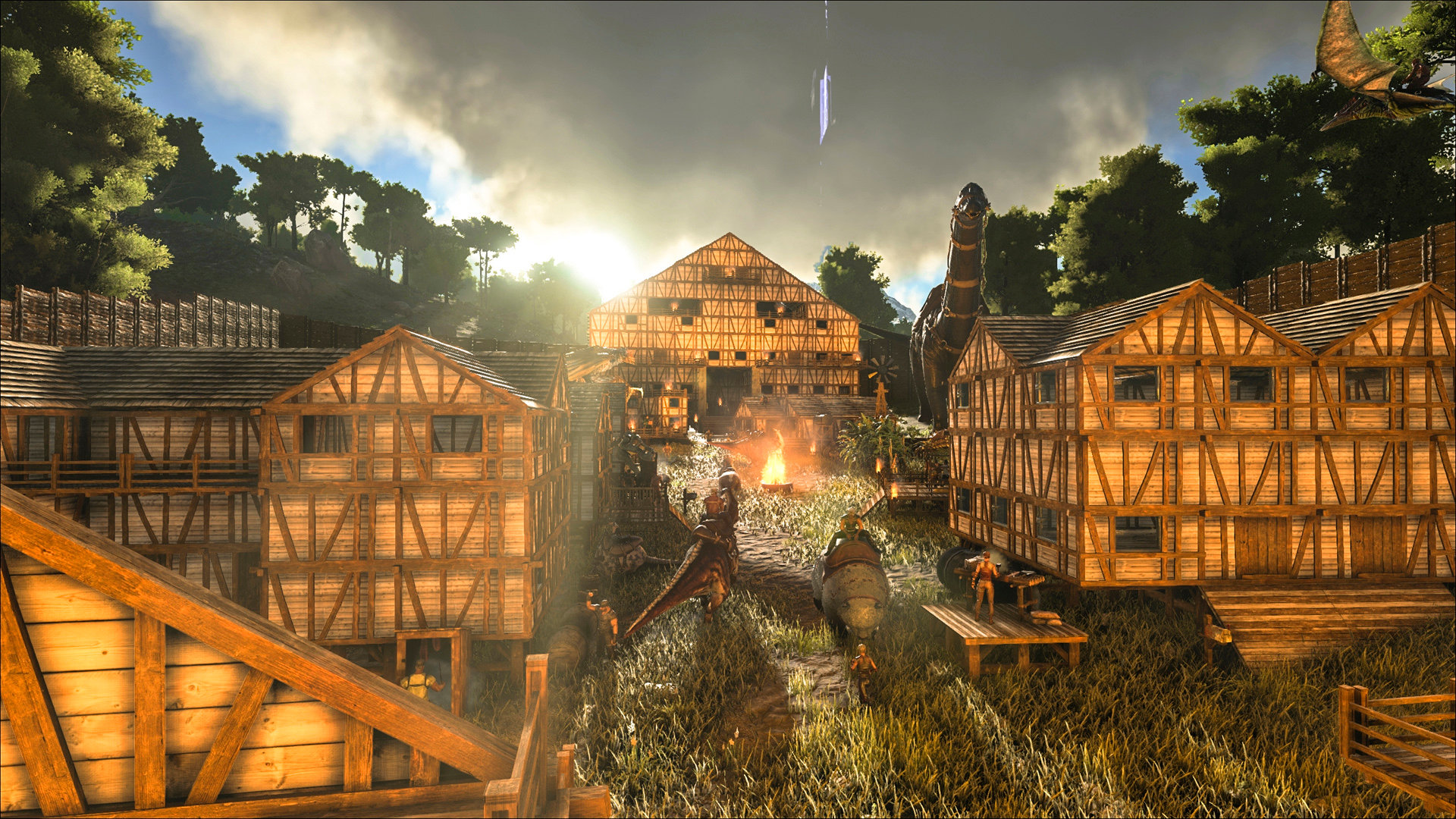 With a multitude of beginners guides available online it shouldn’t be too long before you have the knowledge you need, although it must be said that the fact that the onus is on you to seek out this information and the community itself to compile is a little lazy on the developer’s part, particularly considering how intricate the gameplay actually is. There is a rudimentary guide available on the title screen but it’s only matched in its brevity by how much important information it fails to mention.

As mentioned above, I eventually powered through the steep learning curve and started to survive for longer and longer periods, but by crikey the game certainly doesn’t make this easy for players.

Simply put, ARK: Survival Evolved, in its current state, is one of the most poorly optimised games I’ve ever played. The framerate struggles to keep up, constantly slowing to a crawl even when there’s not that much action onscreen, collision detection is abysmal, the draw distance is almost laughable and texture pop-in will become a close acquaintance after a few hours. 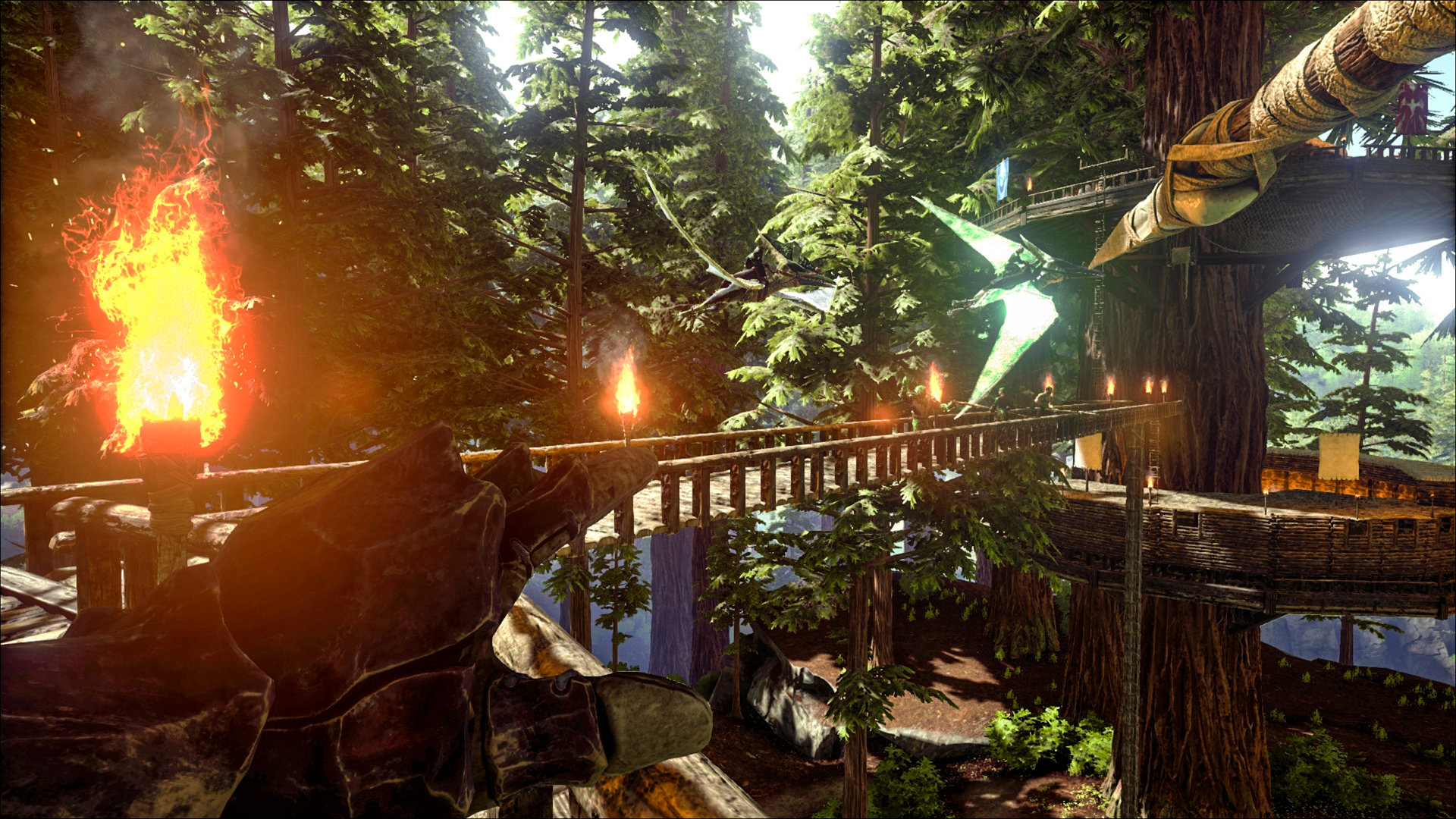 The dinosaur and players models could barely be considered current gen, the animation boasts some top level jank and for much of my time playing I was simply in awe that this is the “kinda-but-not-really” full release of the game.

The game has officially been declared out of beta/early access/whatever since late last month but I have to admit that I’m dubious it’ll be able to receive anywhere near the required amount of polish by the time Auld Sang Lyne is being drunkenly screamed around the world as initially promised.

Yet, there is definitely something to ARK that keeps drawing me back in, whether it’s that innate desire to show the game who’s boss or maybe I just genuinely found it enjoyable at times despite its glaring flaws; who knows? 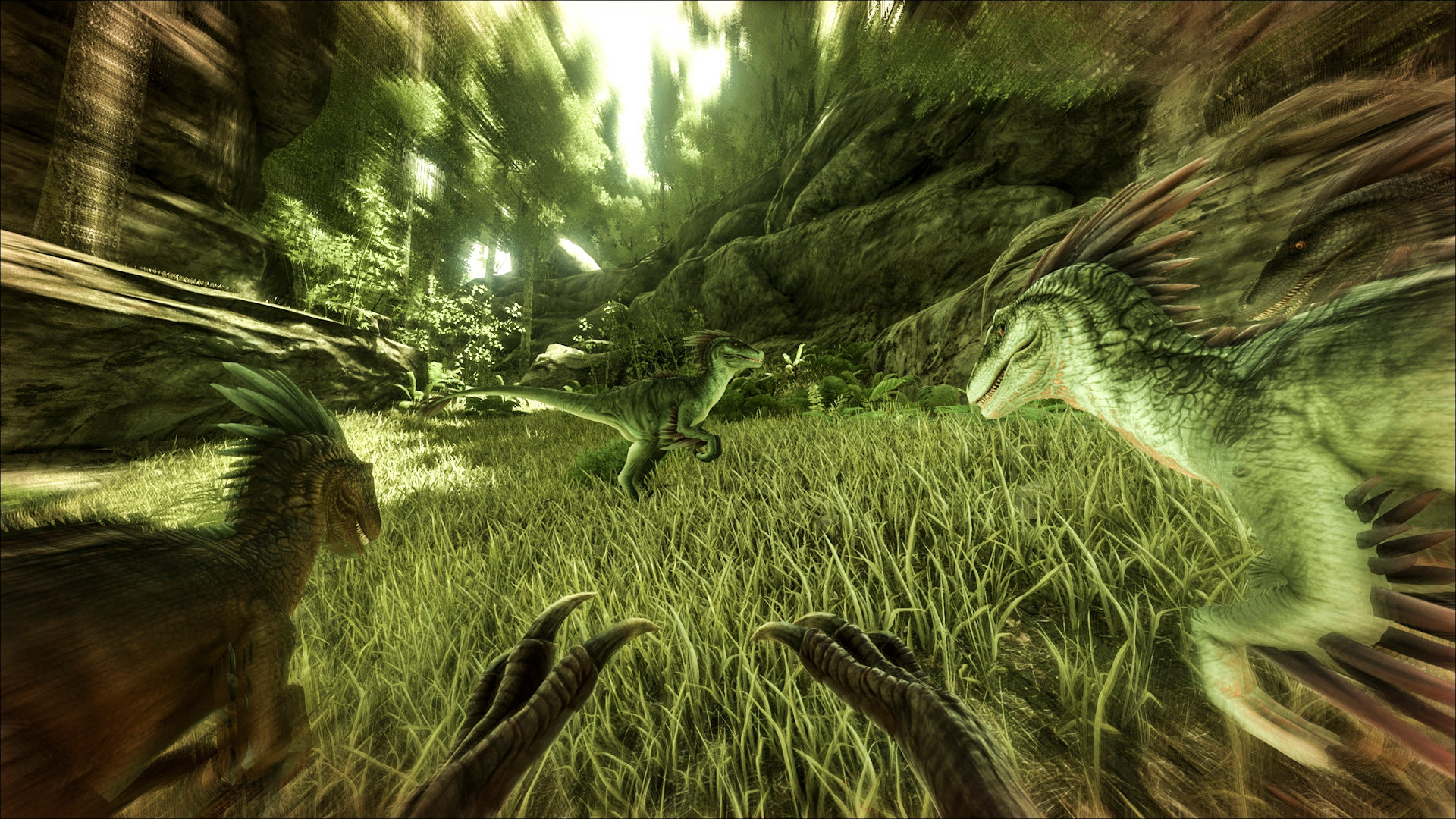 After I had unlocked enough engrams, learned to maintain my health and thirst meters and stick to areas where I was less likely to run into high powered beasties, the game kind of opened up for me. I crafted my first proper shelter, a modest thatch hut with a steady water supply nearby, and with a base of operations established I set out to explore that other big mechanic of the game – Amassing an army of dinosaurs and assorted beasts willing to do my bidding.

By the time of this review, I have two turtles… But every great journey begins with a single step and I find that the lumbering, armoured beasts make for excellent platforms from which you can defend yourself from predators.

One day though, I’ll saddle up and ride off into the sunset on a giant T-Rex named Theodore, you mark my words… Until then Sheldon and Shelley will have to suffice.

Purchasing the Survivor’s pack will grant players access to the Scorched Earth DLC, which offers up a new map and even Dragons to tame, as well as any updates to come in the future, whilst the Founder’s pack also include PS4 exclusive armour and skins. 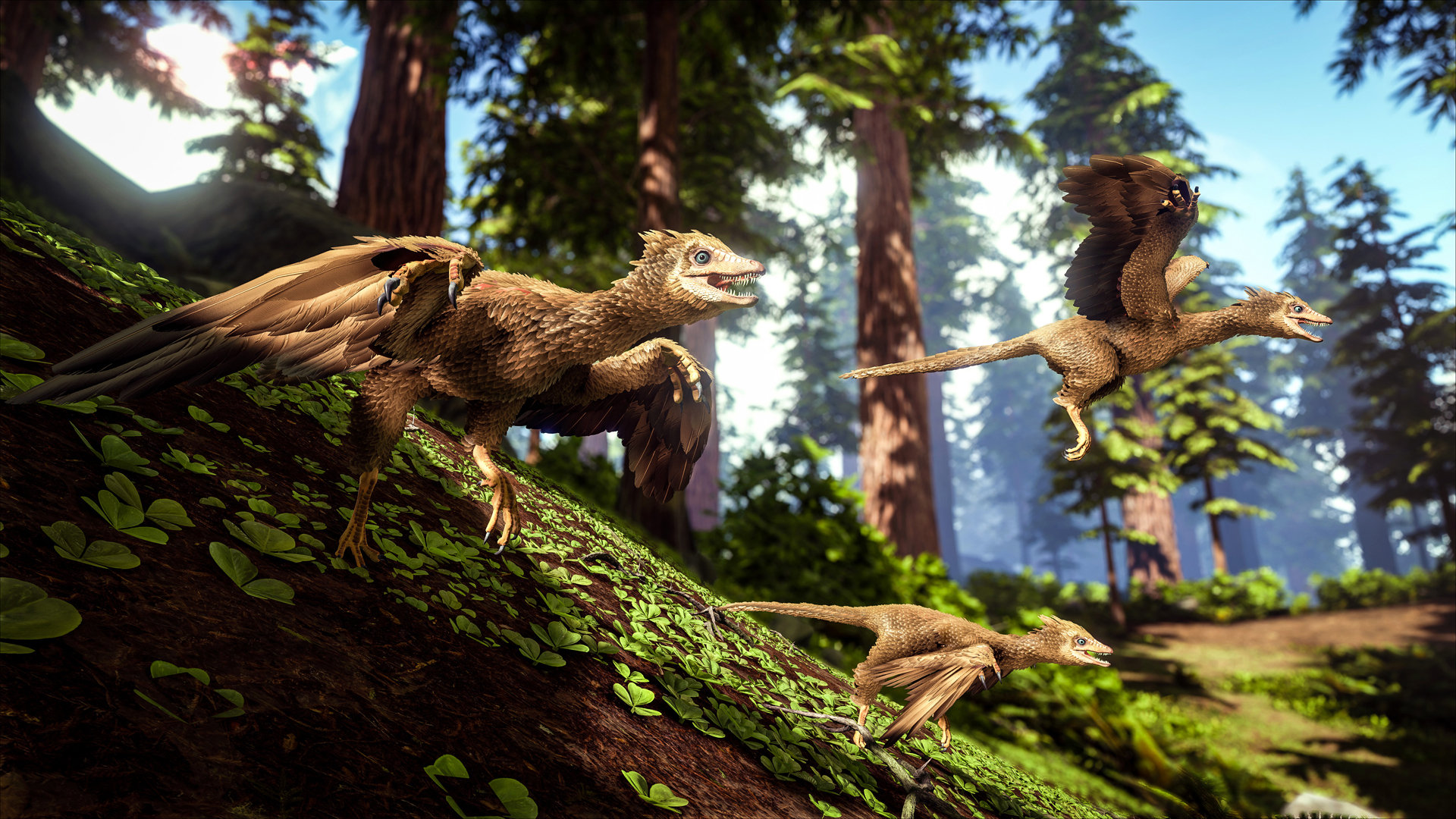 Well, I kinda touched upon this area above, but ARK: Survival Evolved can occasionally look quite attractive at times, particularly the environment itself, but this impression is quickly shattered by the performance issues and low quality texture work.

The audio is solid enough, being mainly comprised of the chattering and roaring of the menagerie of animals around you. Again though, performance is hampered by technical problems that cause the audio to stutter or loop at times. 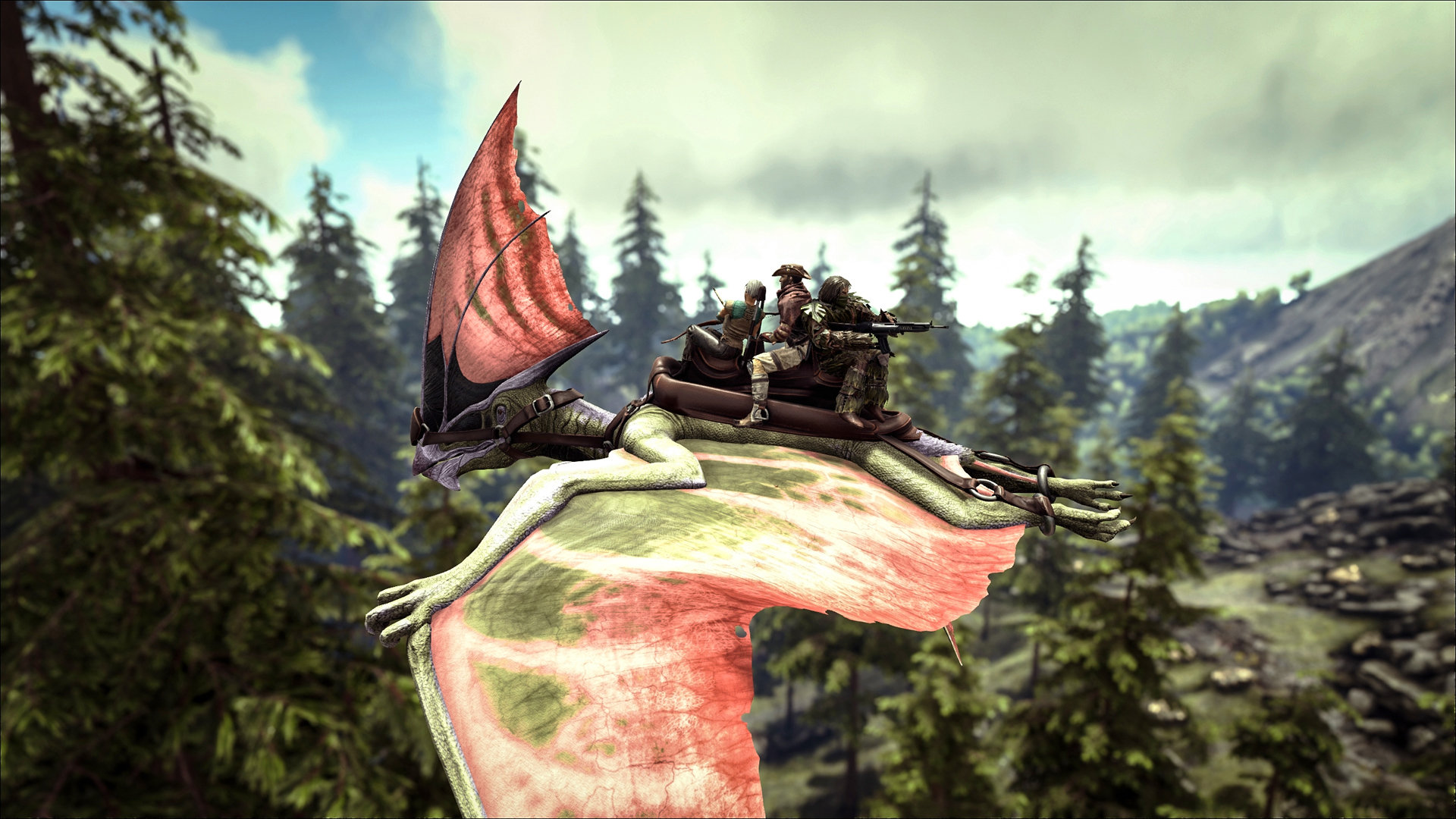 Ark: Survival Evolved has more bugs than the grill of a Mack truck and your first introduction to the game can feel akin to the sensation of being hit by aforementioned truck, but peel away the layers of abstruse game mechanics and you’ll find a strangely compelling game that’ll make you feel like the Pope of Dino-Town at times and want to open a vein in a hot bath at others.

This dichotomy is hard to reconcile and, if we’re being honest, I’m still not entirely sure that I actually enjoy the gameplay cycle of scavenging- dying-repeat; I do know, however, that once I’m finished with this review I’ll be jumping back in to continue my quest for my reptilian soulmate Theodore, so surely that counts for something? 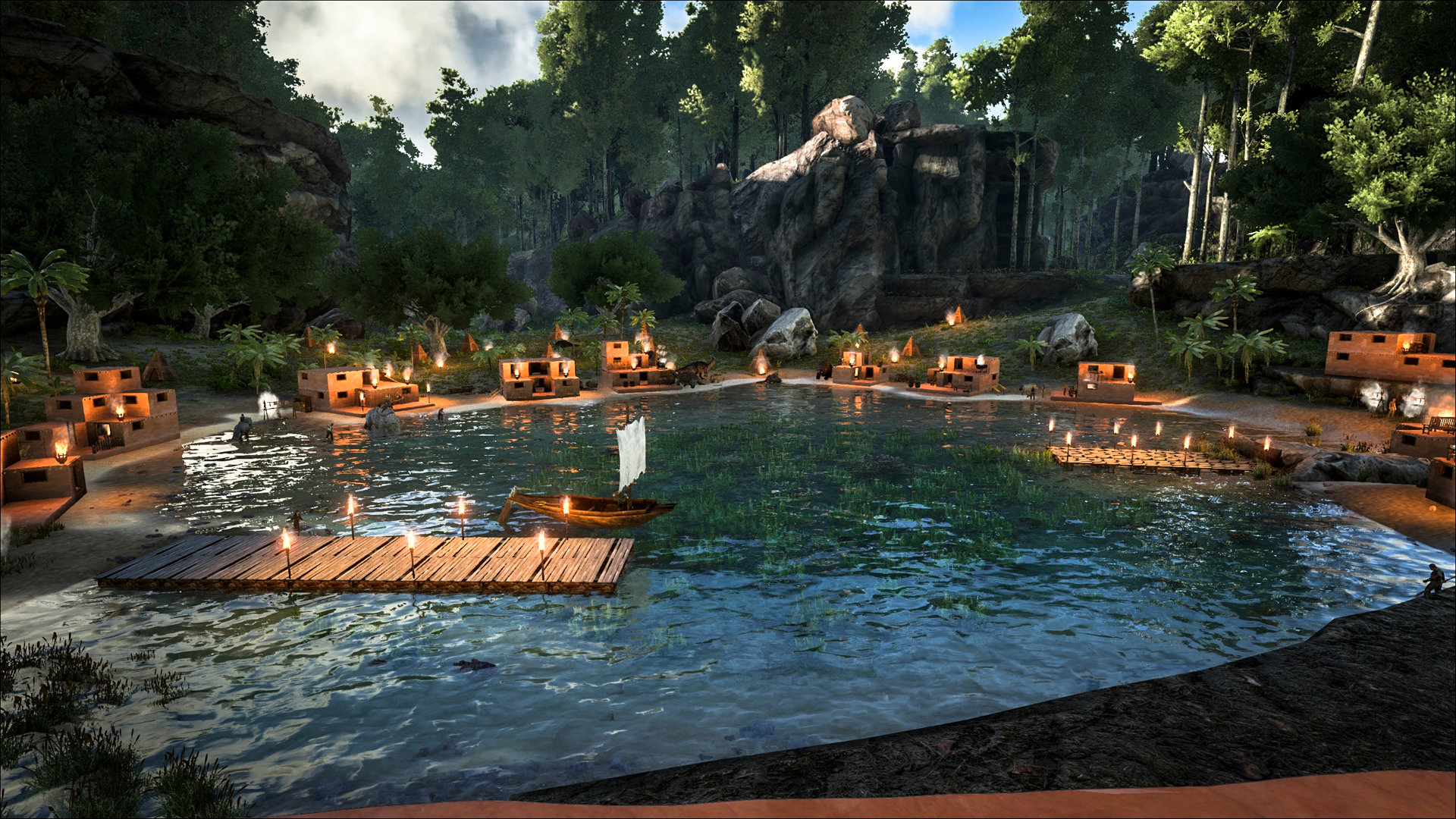 From a mechanical standpoint, there’s a pretty solid foundation here that’s kind of a cross between Minecraft and games where you collect creatures, like Digimon and Pokemon, and concessions have to be made considering the smaller team and the limited budget with which they’ve had to work with. There’s also the fact that this isn’t really the final product and with more updates and content will come stability and variation.

I’m not sure if the game runs this poorly on PS4 Pro and maybe some of the issues were related to server lag (Although most were still present in the single player mode), but it does serve as a pretty large barrier to overcome for those who may be curious about the game.

As it stands, I tentatively recommend ARK: Survival Evolved to those players with both the time and dedication to eventually uncover all that the game has to offer; there’s definitely a rewarding feedback loop that comes with doing well in the game but it’s a shame that these moments of enjoyment seem to come in spite of how the game runs and the almost impenetrable difficulty barrier for newcomers. 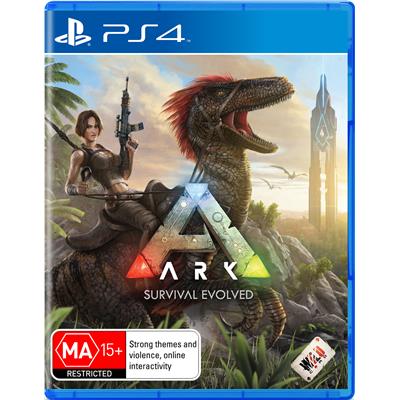