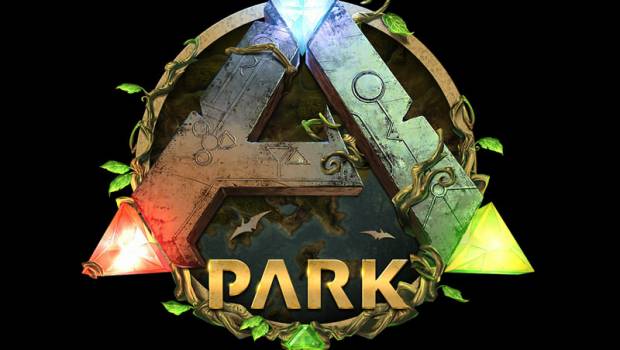 Summary: Ark Park has the ability to make us feel small in what could be a dangerous world of dinosaurs. The moments are there, you just have to find them.

Ark Park VR brings the ARK Survival game into virtual reality, but also in many respects makes it a little more family friendly. While simplistic in many ways in its presentation I did find my wanderings about and looking at the creatures and the world in VR to be very fascinating. Needless to say Snail Games has brought this world to life and it is now a sort of Dinosaur amusement park or naturalist history park.

Jumping in the game, players may feel a bit dishearten that there is not much here. However if you get past the start of the game and dig deeper, you will find a few things that may keep you hooked for some time. Also, Ark Park seems to be trying to duplicate that moment from the first Jurassic Park Movie where there is that breathtaking moment of being around living breathing creatures of dinosaurs that walked the Earth millions of years ago.

It succeeds in some respects, it is interesting, but it is almost a shallow experience because there is no real danger to the player’s character. I mean there are times when you are in a wave of an enemy-like shooter game. However, much or it turns into repetitive shallowness that loses the gee whiz factor after a few repeats. Even in VR, the feeling of “this is awesome” starts to break down after a few goes of the same thing. The game is marred with some blurriness in the graphics that seems to go hand in hand with a lot of VR games, even though Ark Park VR lumbers along pulling off some entertainment as it goes. 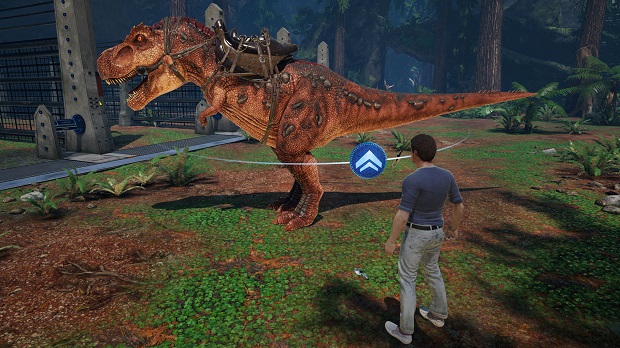 The redeeming factor is that the virtual part of it does make you feel rather small in a world that has some potential to be hazardous. The feeling of awe and nervous amazement is short lived, as you find your safe a majority of the time. Even throwing rocks at some huge prehistoric crocodile, only yields a repeated action that is more amusement park than adventure in a dark prehistoric living world. You still get a bit of a thrill when seeing the predators bring down another Dino in front of you. However, thanks to the towers, there is no danger because the dinos do not view humans as food. Not as long as the towers are working. 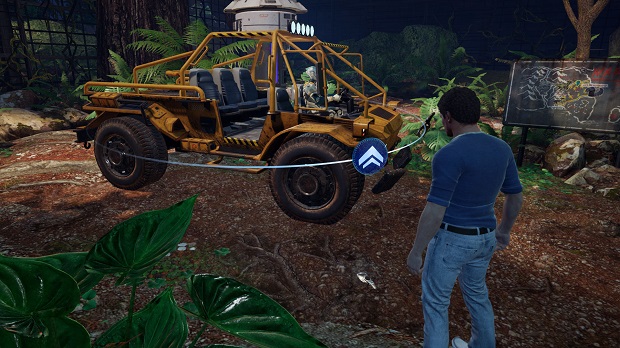 If the game had more information about the creatures out on the trails, it would perhaps be even more interesting and educational. It is great that at the very beginning there is some customization when you make your character. There is of course the standard, male or female choices. Then it also goes a bit into making an age choice as well. Body types, clothing are also included as choices. Not bad at all. Though it what is expected these days especially with most games knowing that players want to make it a little more personal by customizing not only their own items and clothing, but their characters looks.

Once your all settled on you character you’re on your way in the game. There are options for exploration in different areas, many other areas start locked and have to be unlocked as you advance and explore the game.

I will say that if Ark Park VR had expanded and made the world more open and sprinkled it with the creatures and wildlife and just set you out in this world it may actually have kept my interest more. Between exploring and unexpected possible dangers in a Lost World, that would have made the game awesome.

Again as pointed out there are gee whiz and awesome moments, but they fizzle after the first time because nothing more unexpected happens. It is not very dynamic

While there is some basic exploration, the trails are closed off, in other words you are stuck on the same trails with the same interactions and scripted movements of the creatures for the most part. It is not until the wave shooter aspects take place that much of anything happens. 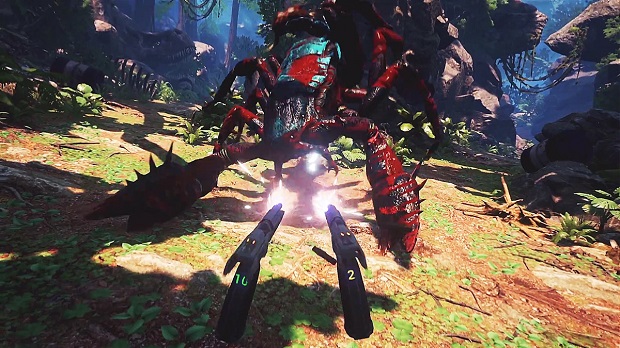 There are aspects of crafting in the game and also hatching your own dino to ride. I would say that if you take the game for what it is you will not be disappointed. If you come into it expecting it to be like Ark Survival Evolved, you are not going to like what you find. A younger crowd may actually enjoy the game a bit more. It is a good effort and shows some of what can be accomplished with this sort of subject matter. We can only hope for a bit more focus if there happens to be a follow up game. This theme park can be enjoyable if you go in not expecting major action and freedom. Kids however will love checking out the dinosaurs and creatures. 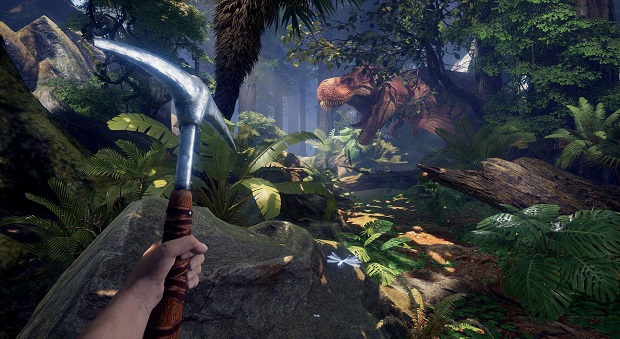 With all the things I found to not like very much about Ark Park, it was nice to give the game a fair shake and dig deeper and play more to get a better feel of it, rather than be utterly disappointed, walk away and write about a totally bad impression about the game. I grew to enjoy going out and scanning for DNA and mining for resources. It can be a slog, but it grows on you. You feel a bit of purpose here and you eventually want to finish your goals.

The story when it kicks in with the towers going down really gives you a sense of urgency. The voice acting seals you in and makes you want to help and defend against the dinos that are no longer mind controlled to ignore humans as food sources. The game has glimpses of coolness, but unfortunately, it is not enough to justify the AAA price tag. 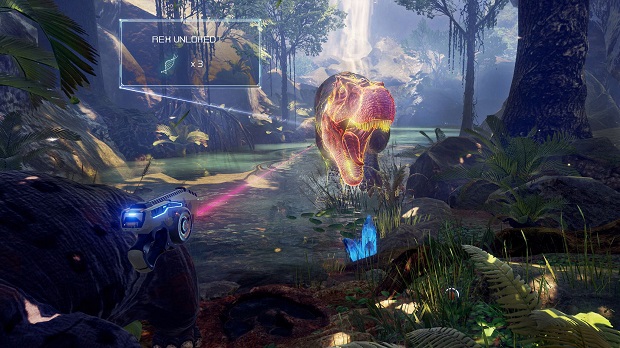 To advance in the game you must gather resources and scan creatures in order to craft items, sounds simple enough, but you end up having to revisit certain places to the point of annoyance and sacrifice of fun.

Best of news is that at the time of this article we got an update of things to come for the title and it looks like the developers are working to make the game far better than it is. Which is an awesome thing.

In even better news, the developers have been hard at work on movement systems – and the game has now been updated with free locomotion! Expect the patch to drop very soon. This is a sticking point for some players and it is nice to see developers work it out that the players will have a choice between teleporting and free locomotion. Free locomotion is NOT for everyone and I can understand the hesitation to have it in a game…IF it was the only choice. Giving the players a bit of freedom when it comes to how much they can handle is a good move on the developers’ part. 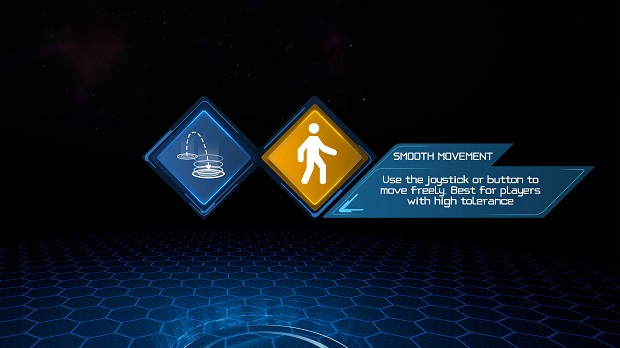 In addition, the team has addressed concerns from PSVR owners – the PSVR version’s graphics will be greatly improved thanks to a patch that should hit around mid-May. This is yet another welcome bit of news. This is yet another sticking point, but if things work out as well as the new screen shots of promise we see…then ARK PARK may well be on its way to something we can sink our dino claws into and really enjoy.

Ark Park has hints of things for almost every player; most people will find some slices of things to enjoy. 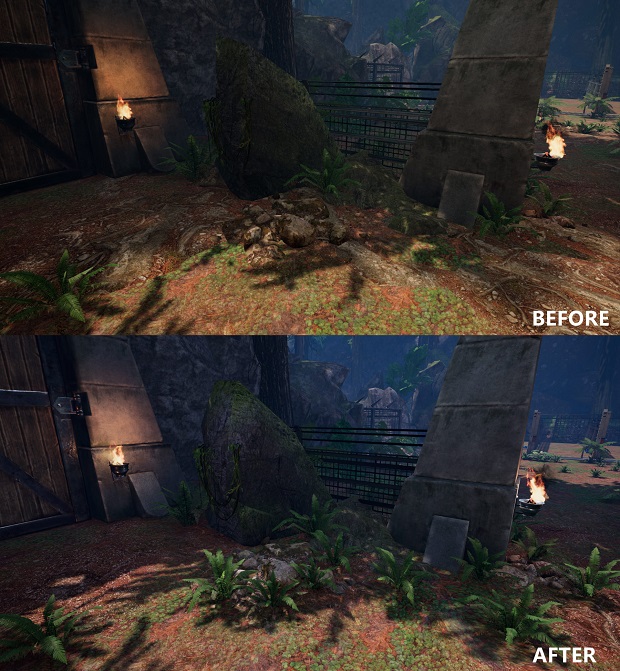 In these before and after screens from the publisher we can see improvements in the graphics indeed. 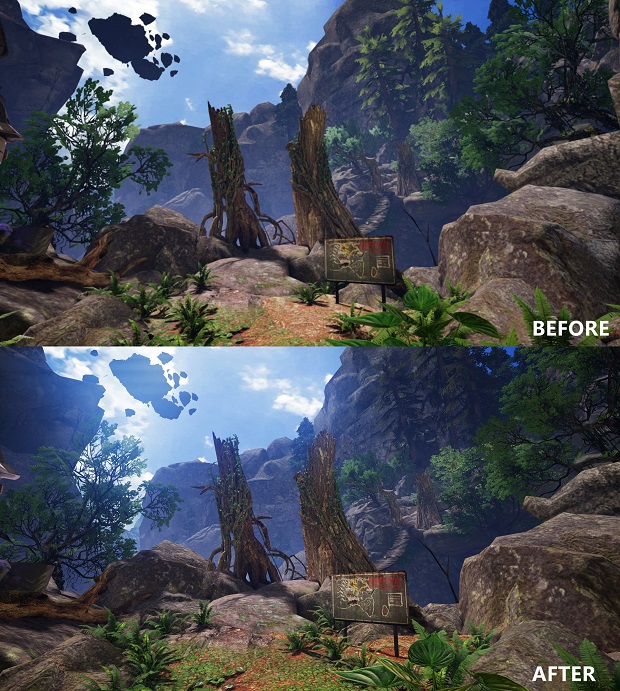 What I Liked: The small amount of exploration. It could use more exploration. Voice actors are fun in this title, gets you into the story.  The moments of discovery and awe are thrilling when they are there. Day and night cycles bring the world to life even more.

What I thought was not so hot: Movement controls for some reason never felt right, with either the Move controller or the regular controller. Questionable graphics, things just do not pop, they look oddly flat and lifeless. Overdone rinse and repeat game play which is having to visit places repeatedly to the point of ad nausea. It is a lumbering process of progression, which only advances you ever so slightly. Thankfully we see some updates are coming that will address some of these things.