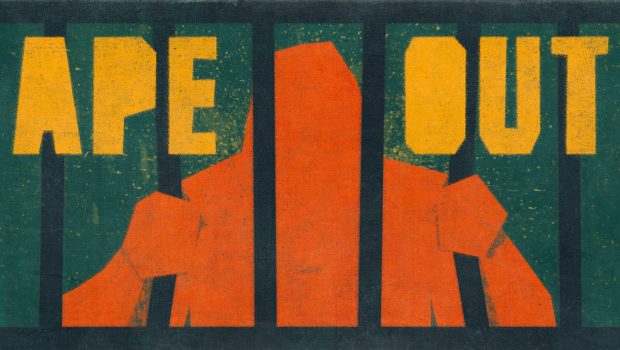 Ape Out is perhaps the perfect example of why indie gaming works. It’s a simple premise, done masterfully well, and a concept mainstream publishers likely wouldn’t touch with a ten foot pole. Not because they wouldn’t enjoy it, rather it’s so off the beaten path. 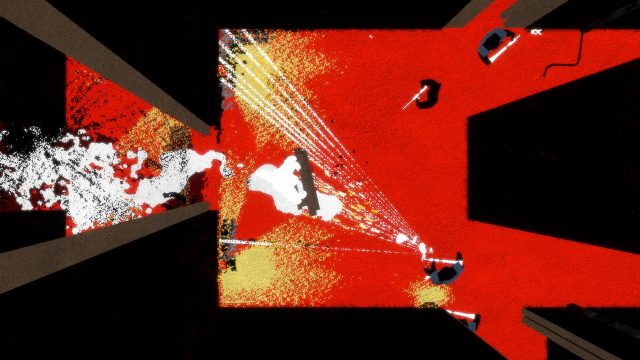 If your first impression of Ape Out lies in its still screenshots, I beg you to re-consider initial thoughts. The game’s beauty is not within individual elements, rather how the sum of parts operates in maestro fashion.

Ape Out‘s premise is quite simple: you’re a big orange ape trying to escape from a series of increasingly complex and heavily guarded, labyrinth levels. Control are elementary: push, grab and throw. Right stick, two triggers, and you’re done. Presentation is also unassuming, provided in a top down perspective featuring basic lights and character models. Music is similarly straightforward; a series of jazz/bossa nova pieces that accompany movement toward an omnipresent sense of dread and excitement (being perfectly in step).

Combined, these small pieces make magic. Ape Out’s genius use of color, visual contrasts, lighting and background music join for a frenetic, always exciting pace that leaves you on the edge of your seat. Guards shoot and splatter to Jackson Pollock like displays, glass shatters in impressive fashion, and always catchy music serves as accompaniment for the mayhem. Body parts and guards whole can be used as shields, with the interchange of run, attack, grab to the finish line exhilarating. It’s like Superhot VR…under chemical enhancement.

Levels are designed to require constant movement. Backtracking is almost always wrong, as more guards swarm and shoot from every side. When the lights go out and following a wrong turn, for example, tracking flashlights seems inevitable death. Similarly, alarms unleash the masses, where it’s run ape run or…again…death. Every mistake produces a constant reminder, a now bigger trail of orange blood via gunshot. Three and its death plus level restart. Clear said level, on to the next…one very different than prior. 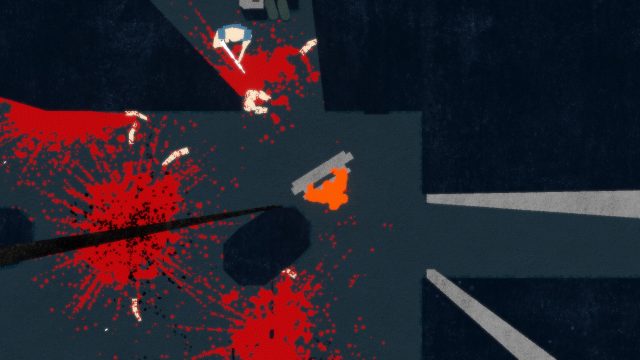 Expect to die a lot. Ape Out is not an easy game…but it is a fair one. Embrace its frantic core, think on your feet and survival odds increase. Do, however, know that death will come often in deducing best paths forward, also how to combat a level’s unique nuances. But Ape Out’s visual genius, music mastery and adrenaline overload ensure it stays fresh regardless of how many times you give it one more go.

If there’s a criticism to be made and – while exceptionally executed – Ape Out is a very straightforward offering. Its brilliance lies in its simplicity, and it is what it is. Also, initial load times (into application from another) are inconceivably long.

Still, if you are a fan of puzzlers and want something different, Ape Out is a terrific diversion. While you may only play it for a few weeks (it’s not a very long game), you’re going to have a blast doing it.