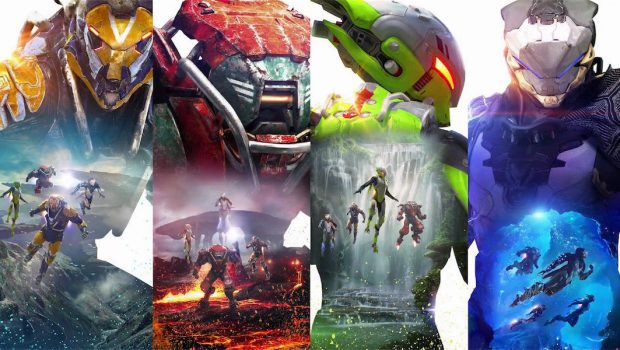 With an intriguing sci-fi fantasy setting, omniscient alien threats and cool-looking exo suits – introduced briskly in the first ten minutes – Anthem’s high-stakes narrative opening will pull on familiar heartstrings for long-time fans of BioWare and their brand of role-playing adventures.

From single-player RPG experiences to live service shoot-and-loot multiplayer, Anthem is not exactly the game I had expected, but after that promising first impression I’ve sunk countless hours exploring the new world of Bastion, chasing and trying to find that initial thrill in-game.

Unfortunately, despite mechs to customise and aliens to shoot, there are significant and fundamental issues at launch – both technical and at a gameplay level – that hinder what is otherwise an entertaining story and class of high-octane action/shooter PvE gameplay from shining. 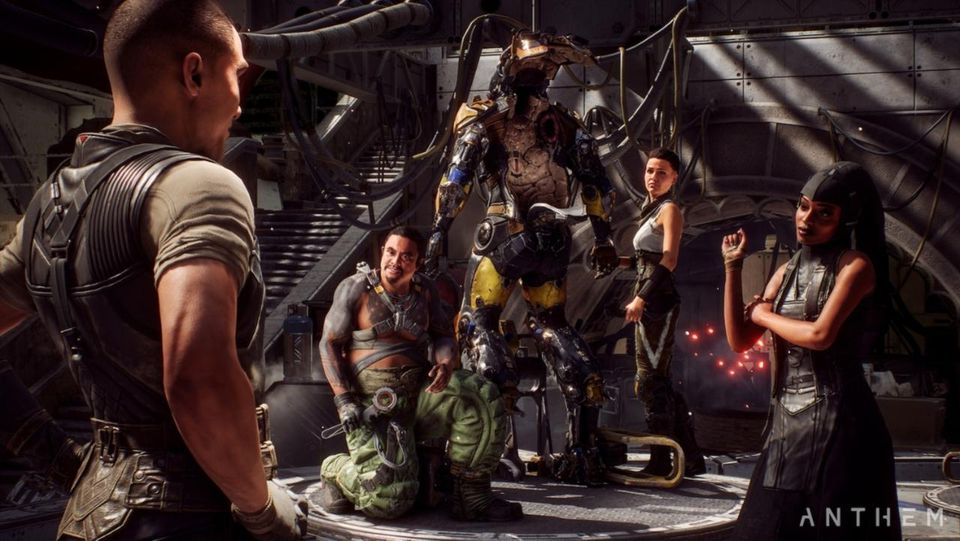 Say one thing for BioWare, say they’re better than most at creating a compelling video game backstory. The game is set on an alien world filled with technological relics powered by the Anthem of Creation, a source of omnipresent energy that was solely tamed by a lost civilisation called the Shapers who abandoned the planet millenia ago. The Shapers left behind omnipotent artefacts and tools, but with limited knowledge on how the Anthem worked. Mankind subsequently discovered the remains of both the Anthem and Shapers, and used what relics they did understand to create exo suits called Javelins and fight back another alien race known as the Urgoth. Led by General Tarsis and the Legion of Dawn, these heroes, along with the part Shapers technology played, led to humanity revering the Anthem and Shapers.

The start of the game is set thousands of years later in Bastion, a nation of fortified cities protected by different factions of Javelin-wearing soldiers. An opposing nation called the Dominion attacked Bastion to take a Shaper relic to control the Anthem, but instead unleashed hell on earth in what is called a Cataclysm. The city’s Freelancers (including the player character) attempt to deactivate it, but suffer major casualties and lose the faith of the people.

With factions such as “The Dominion” and “The Freelancers” and mysteries such as “The Cenotaph” and “The Heart Rage”, the game does trot out many of the usual tropes the developer has become well known for in their other series, but compared to similar live service games such as Destiny, the plot, characters, motivations and setting are refreshingly clear cut. 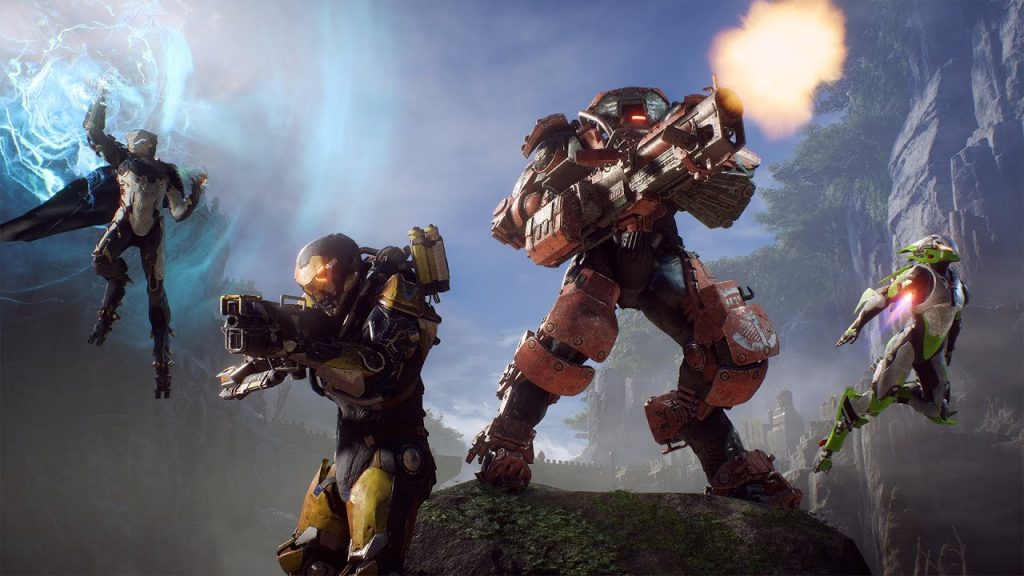 As an up-and-coming Freelancer clearly destined to bring back the glory of the group, you have your choice of gender, voice, pre-set appearance and Javelin to pick from before you make your mark – and what a choice they are. These mechanised suits of death and destruction come in four distinct classes that play very differently, each with their own well balanced strengths and weaknesses that fit various playstyles and preferences. The Colossus is the slowest, a heavy tank that can absorb huge amounts of damage with its shield abilities and obliterate crowds of enemies with heavy weaponry. The Interceptor is the fastest, a slick ninja that weaves in and out of battle with devastating melee attacks at the cost of survivability. The Storm is inarguably the ‘mage’ class in Anthem, able to hover over the battlefield, dodge attacks by literally warping through bullets, and send fire, ice and lightning down upon enemies. Last but not least is the Ranger, an everyman class that carves out a very important niche in dishing out high damage per second to single high-value targets, especially with its unique rocket-based abilities.

The Javelins are easily the part of Anthem BioWare nailed from the get-go, even better than the entertaining but ultimately predictable story. They are visually distinct and have a ton of opportunities to customise their colouring and texture patterns, have incredibly varied abilities that cater to different types of players, and the flight mechanics for each and every one of them is masterfully done. Basic traversal through the skies, canyons, caves and dungeons of Bastion just feels fast and fun here, as does blasting titans and soldiers with elemental fury as my Storm or vaporising them with heavy assault launchers of my Colossus. Heading out into Freeplay or playing story missions with up to three other friends is even better, but the game’s persistent matchmaking system (some might say too persistent) ensure it’s easy to find random players.

It’s fair to say Anthem feels trapped between two worlds; the narrative-rich, character driven elements of the first-person hub world of Fort Tarsis, and the third-person, action-heavy shoot-and-loot PvE gameplay that makes up its core gameplay loop. The first, while slow and plodding at times, at least has personality and effort put into its interactions and chain of events; the latter lacks much of that charm. Whether it’s main story missions, Contracts (repeatable missions) or Strongholds (think Strikes if familiar with Destiny), the basic formula of blasting through waves of enemies, securing sites, fetching something or diving into a dungeon to face a bullet-sponge boss is played out all too frequently with only flavour dialogue and witty banter to distinguish some from others. Many enemy designs are recycled, with brain-dead AI dampening the flow of firefights and exploration and discouraging use of smarter tactics. More than once I rushed in with three other strangers just to get the section done with and return to Fort Tarsis with a chance to have a new weapon or component worth getting excited about. 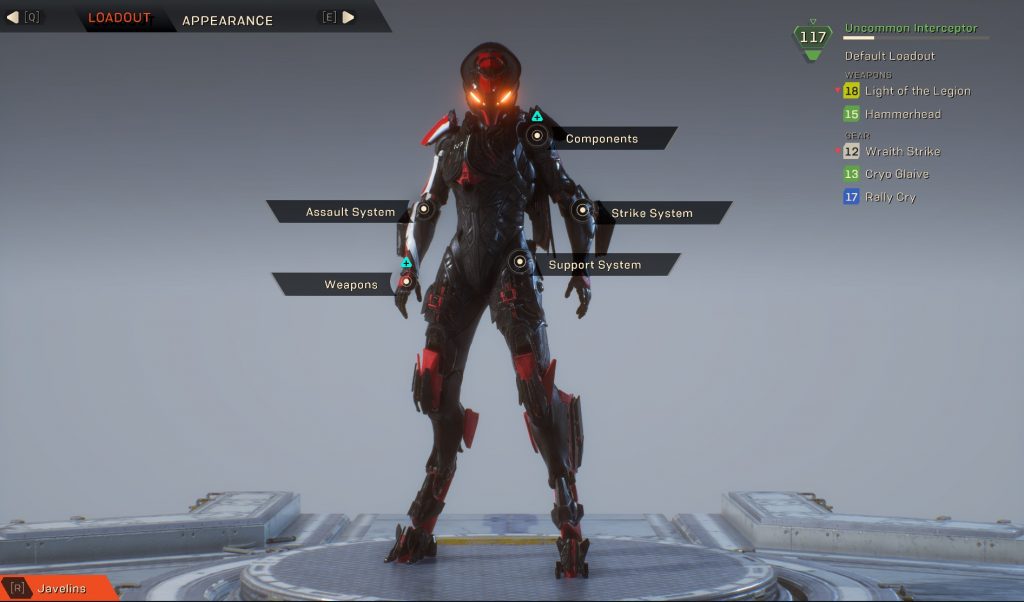 Unfortunately, that’s harder than it should be. The variety in weapon, gear and component loot at launch – even taking into consideration the latest loot-specific patches and promises of cosmetic Strongholds chests – is disheartening, to say the least. For a shooter centered around loot, the lack of any cool armor or weapon cosmetics without having to purchase them in-store (either with in-game currency or real money) is disappointing given how much emphasis has been placed on showing off custom Javelins with our tailor-made appearances. Weapons and gear loot with better stats is also plagued with inconsistencies, though BioWare has actively put in steps to rectify the issue in patches. The amount of content offered at launch, however, is dismal and dampened my motivation for anything outside the story significantly.

The feeling of being an underdeveloped product is hard to shake with the abundance of technical issues and questionable design choices, too. Loading screens plague every single transition – from Fort Tarsis to the Forge, Forge to missions and launch-bay, and back again, and the bland flavour text does little to abate the unavoidable problem. The absence of a stats screen to quickly gain a concrete answer on your Javelin is perplexing. But most apparent is the small size of the overall map; the world outside Bastion is undeniably stunning and full of photo opportunities, but minimal variety in both terrain and locations. It’s important to keep in mind the realities of a live service game and the promises BioWare makes in its 90-day roadmap of free story expansions and the like, but at launch, the content on offer is missing a level of meatiness, refinement and overall polish that the developer’s other titles never truly struggled with. In an ultra competitive era filled with behemoth live multiplayer games-as-a-service, it’s easy to see many initial players dropping off unless content delivery and game updates prove to be more consistent than the base package.

In terms of audio and graphics, Anthem delivers an excellent voice cast, soundtrack score and detailed character models and sci-fi environments. The by-the-books narrative and sometimes cringey tropes are elevated by some genuinely charming voice actors that lend authenticity to the world (combined with some great mocap animation) and help them develop naturally over the course of the game, with my favourites being Owen and Neeson – though it’s a shame conversation choices are limited to answer options, unlike past BioWare titles. The performance across PS4 is also consistent, with the PS4 running mostly at 30fps with little judder and the PS4 Pro offering options to slightly up the resolution (and remove the framerate cap) at your discretion. It was also appreciated to be able to enable and disable certain graphical effects like chromatic aberration, camera shake and motion blur, something console players don’t often get the luxury of having.

Anthem is a fast and frantic third-person action multiplayer shooter that nails the power fantasy of reigning fire down on alien enemies in a high-tech, sophisticated exo suits. Unfortunately, the loot part of the game is severely underwhelming at launch, with no cosmetics outside of microtransactions or store purchases and an ongoing adjustment of weapon and gear drops with meaningful and consistent stats.

An entertaining and well-told story is also let-down by repetitive mission structure and the baffling omission of key elements such as stat screens; the result, at launch, is a slightly unique PvE live service multiplayer offering that clearly needs more time to reach its potential.

With so many games-as-a-service titles out right now, it’s up to the player on whether they have the patience to ride out the many problems in hopes of a patch fix – credit to BioWare for responding swiftly to the player-base with their requests. As a base package, though, Anthem severely underwhelms and is a hard sell to recommend at launch for those outside hardcore fans.