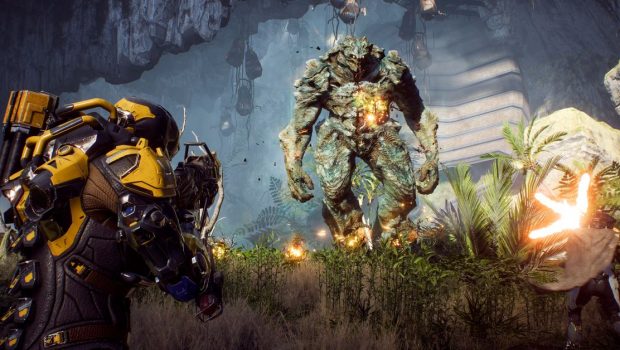 Summary: Anthem's VIP demo show-cased it's visual treats and world-building chops, but also a lot of lingering, potential technical issues that might dampen the experience. at launch.

The troubled VIP demo period of Anthem this past Australia Day weekend was a well documented – and unfortunate – bugfest.

With patchy online connectivity and plenty of server errors plaguing players from jumping into BioWare’s new space epic, my first impression of the game, like many others, was not the best – even after finally getting a chance to jump into a javelin and start freely exploring the shared open-world.

This was a demo set in its own bubble, as BioWare and EA have continuously hammered home, with its own balancing and progression meant to show interested players what Anthem is all about. I really wanted to see, but it did take a good couple of hours to actually enter Fort Tarsis, the central hub world of Anthem, where players explore the hand-crafted space via first-person perspective, in comparison to third-person during combat, and interact with NPCs to purchase new items, read up on the latest community news and immerse themselves in the capable shoes of a Freelancer before accepting missions – solo, or with up to three other people. 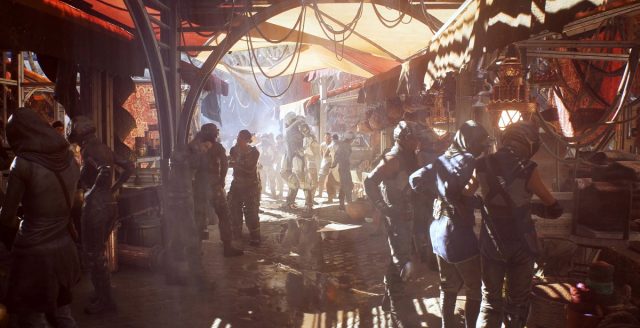 Fort Tarsis immediately evokes comparisons to similar hub settings like Destiny’s The Farm, but I found the characters and environments much more detailed, certainly more expressive and generally more interesting than other shared world shooters – which is a relief taking into account BioWare’s most recent world-building and graphical bungle that is Mass Effect Andromeda. Dialogue is snappy, albeit sometimes bordering on overly witty (going for a faux Firefly-esque tone) and NPCs like Matthias have engaging personalities and don’t just stand around all dead-eyed and static. Unfortunately, an inconsistent frame-rate hampered my general experience in this space, but it was somewhat remedied once I got into my first expedition.

Playing most of the demo as the Ranger class, the core gameplay formula of Anthem takes the best of Mass Effect 3’s multiplayer mechanics (which is BioWare’s own DNA) and evokes natural comparisons to similar loops executed in competing shared-world experiences like Destiny and The Division. The mission I played with two others players in public matchmaking pitted me against members of the Dominion, who sounded a lot more dangerous than they actually were, with members going down easy under regular assault fire and some well-placed grenades. Even with the less agile Ranger, traversal felt smooth and flying amazing, but a little overpowered against the mostly ground-restricted foes we blasted. Controls were generally tight and responsive, though I wished enemies reacted more to the impact of bullets instead of getting damage numbers thrown around amidst the particle effects (which were awesome).

Admittedly, it was easy to turn off my brain when playing with a group, but retrying parts of the mission solo, Anthem does present a decent challenge even on Normal difficulty. Enemies felt a lot more focused, and I had to play far more tactically and use all of the Ranger’s arsenal and movement capabilities to avoid a quick death – a challenge that has piqued my interest to explore in further detail once the full game launches next month. As for the Ranger, it definitely plays like a straight third-person shooter ‘ generalist’ class, and I see many players passing it over in favour of the more exciting-looking Storm or agile Interceptor (not to mention better armour).

Easily the strongest part of the Anthem demo was the Javelin customisation on-hand – or at least teased. Anyone who loves mech suits or playing super soldier dress-up in sci-fi shooters like Halo will be enamored with the level of personalisation on offer here. You can switch up colours and the textures of your suits on top of equipping a decent amount of sweet looking gear, which I look forward to unlocking come launch – though it remains to be seen how viable it is to unlock cosmetic gear just by progressing the game versus buying items via microtransactions.

If there’s one thing about the demo that has tempered my expectations for the final Anthem experience thus far, it’s the excessively long loading times – not including the infinite loading screen bug that prevented many players (including myself) from jumping into the VIP demo period. It seemed like there was constant loading between the hub world and expeditions, and other small zones in the game world itself that slowed down the otherwise fast and frantic rhythm of flying and shooting down foes. It also interrupted several dialogue instances during my playthrough, causing me to miss out on some interesting-sounding background chatter.

Overall, my time with the Anthem demo leaves me excited at what type of content it can offer in the long-term given its live service model, but still relatively cautious on certain aspects such as the writing and the gear progression. If BioWare can deliver that addictive loot-shooter gameplay loop and a world and story that lives up to their well-deserved pedigree – something that other competitors in the space like Destiny have dropped the ball on – it’s a sure-fire day one purchase for me and many others craving a new sci-fi opera and co-operative experience.