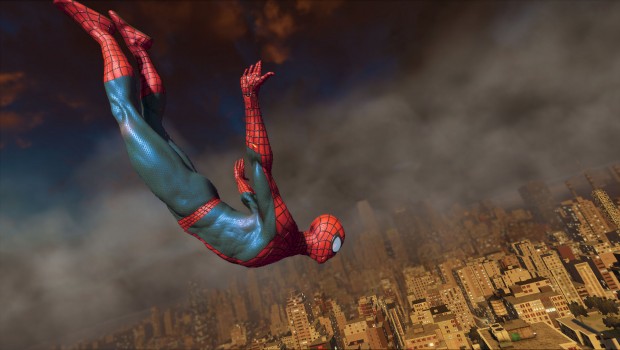 The Amazing Spiderman 2 Xbox One review

Summary: The Amazing Spiderman 2 may not do total justice to our hero, but the ride is a good comic book distraction.

We had been hoping to see more Spiderman action, and thankfully Beenox who has handled other games featured everyone’s favorite wall crawler stepped up and delivered a mixed bag of Amazing Spiderman action. So like with many games, there are some things that can be considered flaws. This one can say the same thing. Though we will go over the cool stuff of course and some of the things that seem to be delivered a bit weaker than the rest of the game.

On the up side…Keeping some of the best from each of the games that have come along in the series, they managed to bring back some favorites as well as expand on the webbed wonders adventures and our gaming experience enough to not make this a total crash and burn. And that IS a good thing.

Keeping with the tradition of the Game just before this one The Amazing Spiderman 2 does a good job of giving a decent nod to the Themes and evens in The Amazing Spiderman 2 movie, and that is where the comparison ends. While it does have some of the characters and villains from the film gamers and Spiderman fans alike will be pleased to know there are other plots and story devices going on in the game that give nothing away about the film and also forges its own path in the Adventures of our Hero. 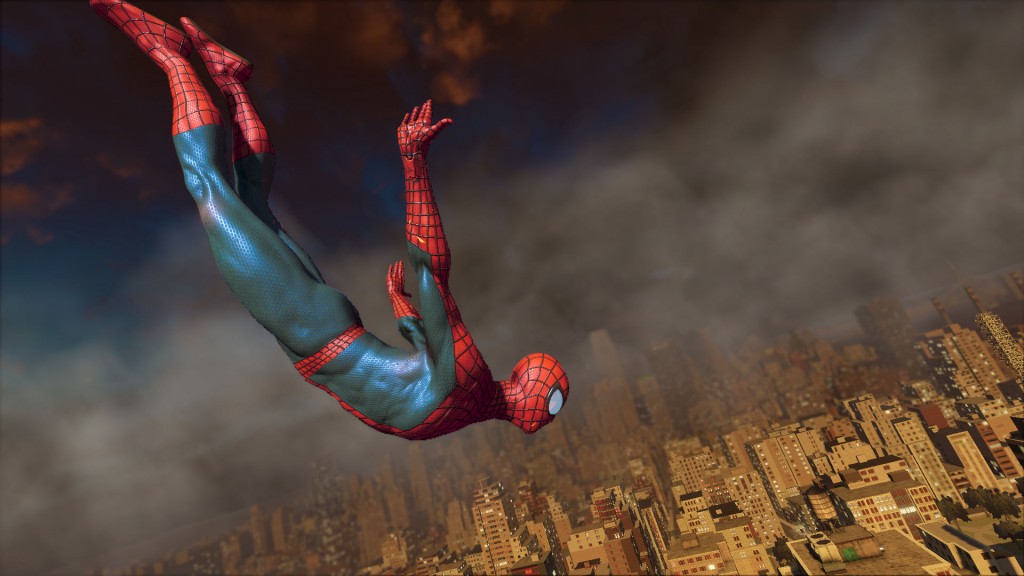 It’s no secret that some of the iconic and well known Spiderman villains can be found during the game such as Kingpin, Black Cat shows up again, as well as Electro from the film, an interesting twist with Kraven the Hunter and some surprises as well. If you have read our write ups before you know we try our best not to give too much away as we feel part of the gaming experience is the wide eyed surprise of discovery in a game, we can say that there are some pretty cool things that pop up in the game.

During the game there are times that you will explore some areas as Peter Parker. You are not able to use your abilities at all during these times, which can be a bit of a buzz kill, but understandable. After all how would you explain away someone seeing Parker pull of some not so normal everyday person moves?

So Peter, during these times looks around areas and sometimes takes pictures for the Daily Bugle. Though the presentation is like he is investigating it never feels like that’s what is going on. Sure the pictures he is taking for the Daily Bugle may be used for some news story, but nothing beefy ever really comes up in his investigations that feel like they advance the story with anything meaningful. Sort of like the mission to walk around a Gala and as Peter Parker, listen in on different conversations. You hear stuff about other characters of course, and it is in the context of the game and the story line…but it just lacks something. 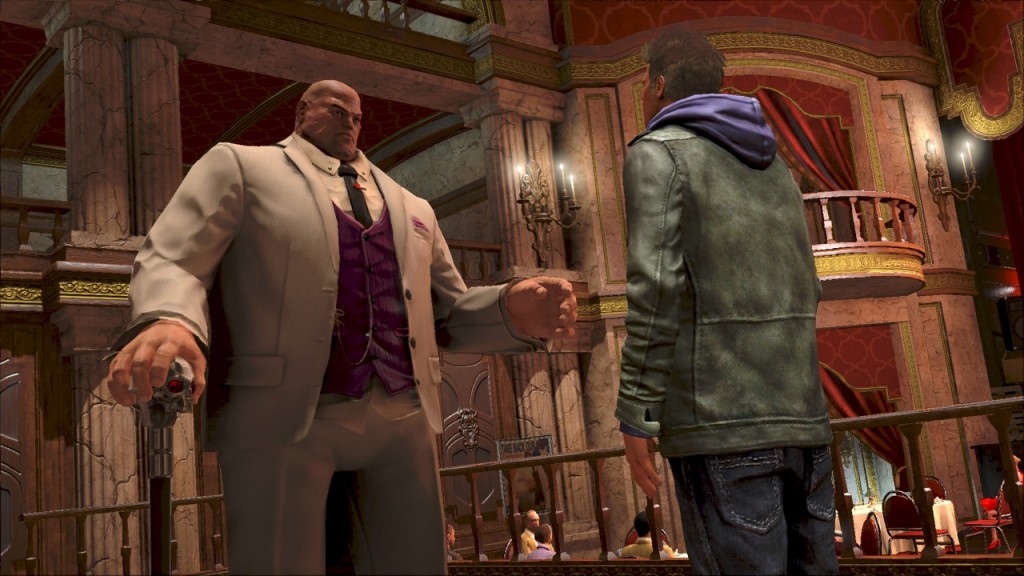 There are, from time to time question and answer elements in conversations with other characters. While it’s not a total waste and a nice change of pace. You find some things out but it never really feels like it grabs you by the jugular. We do find out some of the meanings of the Tattoo Uncle Ben’s killer has on his wrist. This revelation does lead into later running into one of the first villains in the story.

The general plot is a Hodge-podge of events that result in bringing in all of the different villains so mentioned. While the story is admittedly thin, hard core fans won’t be overly disappointed with the adventure.  Those who may not get the whole outlandish comic book adventures may want to look elsewhere. Especially if you’re going to stress so much over the thread thin plot lines that make up the story rather than dive in and enjoy yourself. There is plenty of crime that take place this time around and it is varied.  Car chases are back but introduce hostage elements to stopping the getaway car.  Unfortunately it seems that every carjacking or getaway car has a hostage now…would be nice to break that up a bit.

Crimes and different side missions show up on the map, and after a time they start to flash red, and if you do not get to them in time, it means the event took place and Spiderman did not make it in time to stop it.

Now this is important because now there is a meter that on one side is Menace and the other side Hero. If you let too many events happen and do not counter them with preventing events, then the meter will slide over into Menace and security teams and drones will be out to get you.

Doing good deeds like saving hostages, stopping getaway cars, saving people from burning buildings and many other things, will show that you are doing heroic deeds and you slip the meter over into Hero…doing these side missions also give you points to spend on upgrades in not only abilities, but fighting skills. 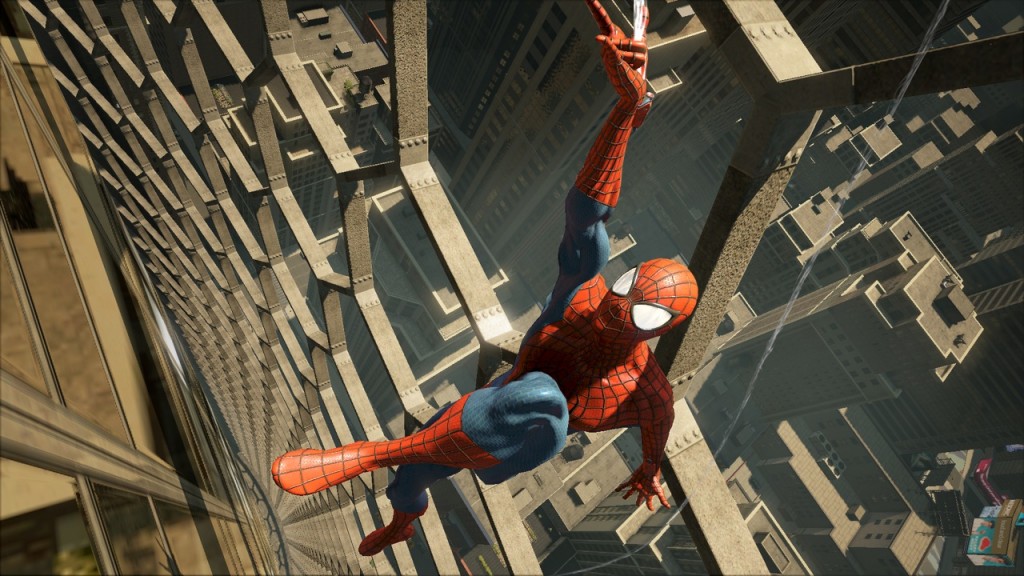 Cool things that have happened with the series? Well at long last we now have the webbing has to anchor to something for our hero to swing through the city. With this comes a few tweaks to the controls.  Not everyone likes the web swinging. I do like it.

The change in controls is slight and are not at all difficult to get used to for fans coming back to this latest game, nor are they difficult to pick up cold for first timers with the franchise.  The right and left arm respectively are mapped to the right and left triggers of the controller. Hitting the left trigger will have our webbed wonder fire webbing from the left wrist and right side if hitting the right button.

The web line will attach to the nearest attachable surface, so if you are swinging along in the concrete and steel and glass canyons of New York, and there is no building at your height close enough to latch onto say on the left, then your web won’t hit anything and you may fall… until your low enough where you can reach a building on either side.

Alternating between left and right web shooters also assists you in forward momentum and you also gain height. Further in swinging, if you hold the opposite button trigger down Spiderman gains some speed in the swing. 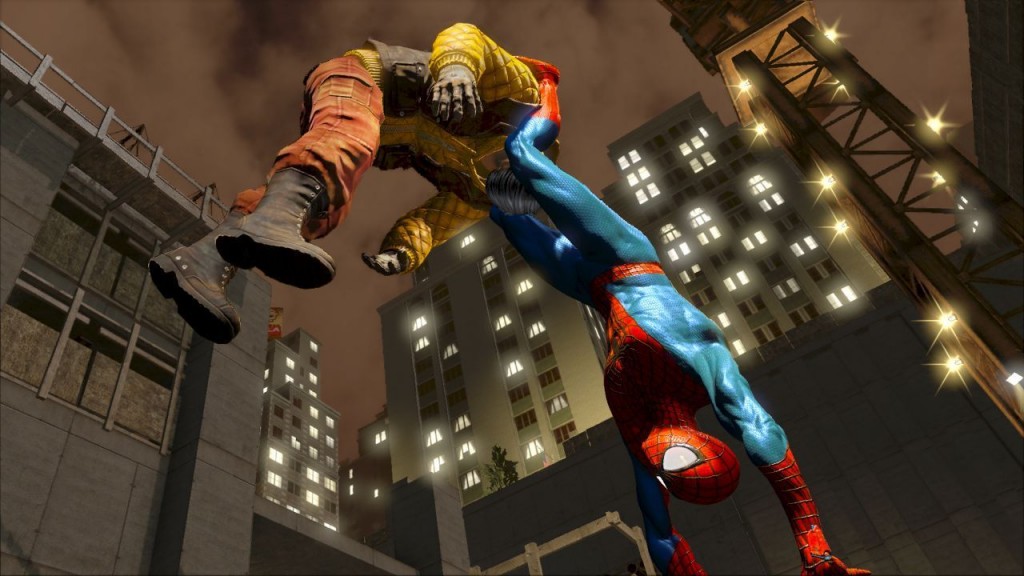 Getting around through the city and in combat situations is also aided by the web rush, a feature that was used to good extent in the last game. For those new to it all, web rush is initiated by holding the appropriate button…this makes it seem like time is slowing down (Though it’s Spiderman using his super reflexes). This let’s Spiderman choose any number of highlighted nearby locations to jump to with the aid of a web line sometimes. These web rushes can be linked together with web swinging and wall crawling for some pretty…AMAZING travel through the city. Double tapping the button will do the move without slowing things down.

Now like I was talking about earlier, there is of course crime and villains to fight. So Spiderman has some pretty nifty moves, inspired by the movies.  Along with the kicks and punches and upgrades to web attacks and web pulls, Spiderman of course has his Spider sense. When it goes off, you better do something. A red flash above his head indicates the danger is in melee range; a white light signals a distant strike or projectile. Be ready to evade or counter. The dodge feature when used in conjunction with a well-timed Spider sense going off and dodge will also trigger some cool counter attacks from the webbed wonder.

There are some stealth elements that have been implemented, when you manage to sneak up on an enemy, you can take them out fast. This triggers some interesting animations of grabbing them, and doing some kind of punch and or kick and web combos leaving them out like a light. 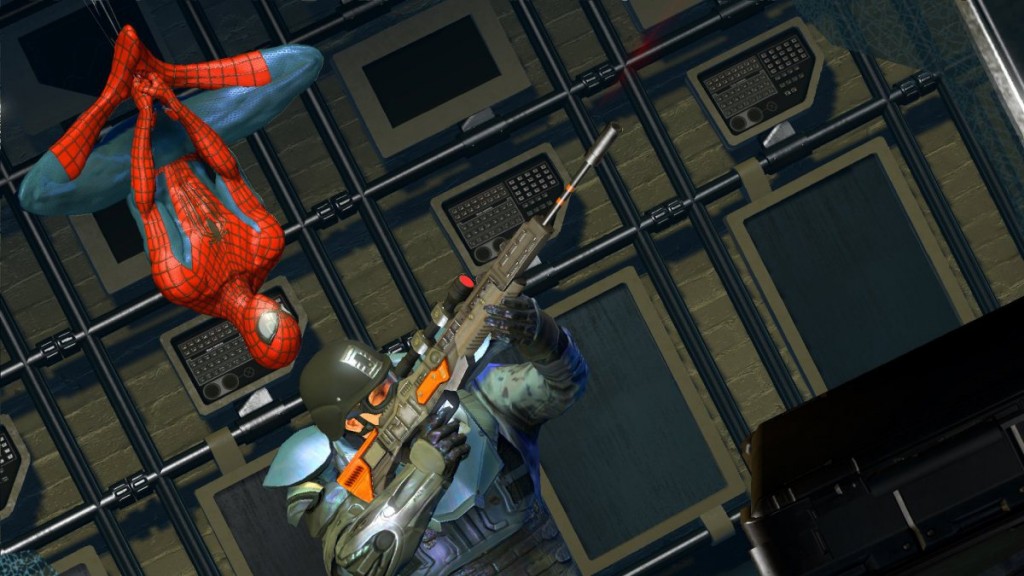 While it has its fun moments there are just too many oddities to ignore in regards to making it a less than Spectacular game. As noted the story and the writing is not on par with what one would expect. One liners are used to death and the script is less than stellar. Cut scenes bombard you after every side mission, a news story runs about the event…but it’s all canned of course so after the fourth time doing these side missions, because of the news reels… you don’t want to do them anymore. If we could turn them off after the first run…that would be great.

Also the animators for the cut scenes, seems to go the school of power rangers acting movements, meaning just because a character is in a full costume seems to mean to them that they have to talk and make these spastic movements that makes (Spiderman) look like he is having a seizure fit in these cut scenes. 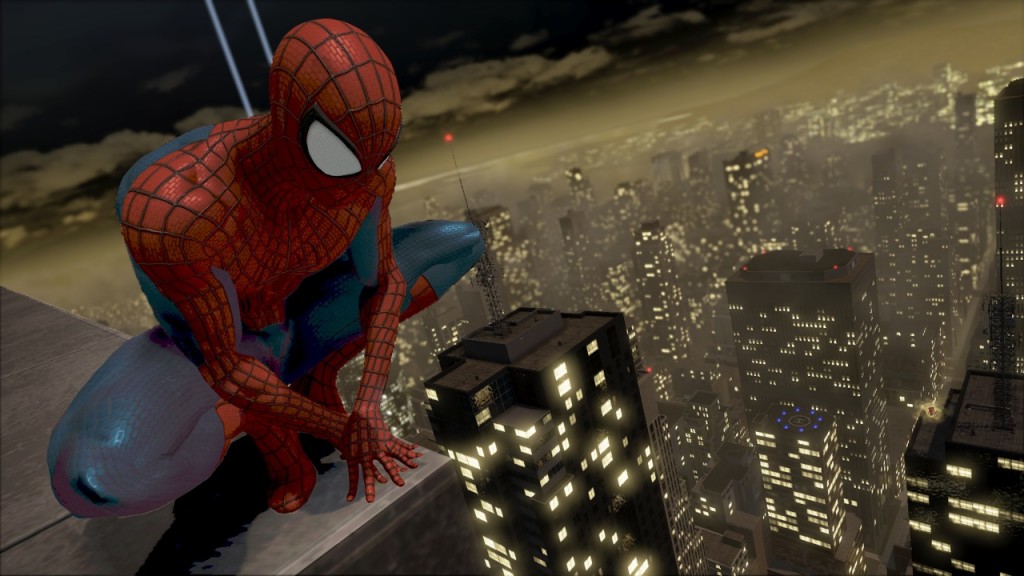 The Amazing Spiderman 2 is a fair game in the series. It has a few glitch things here and there…but if you are a hard core Spiderman fan, you will enjoy swinging through the city. I know I do. 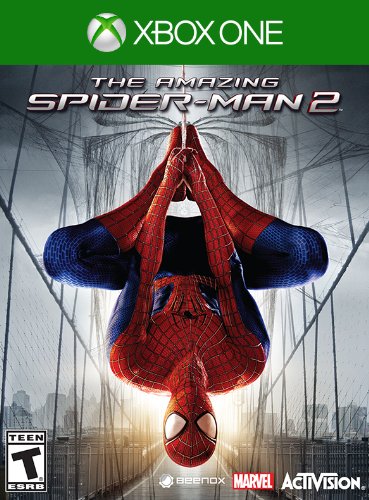