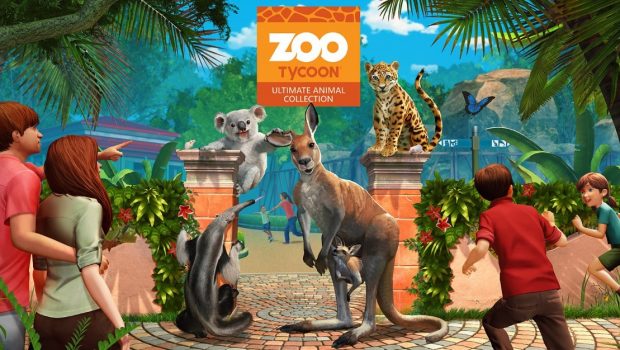 Summary: Zoo Tycoon: Ultimate Animal Collection on Xbox One X allows you to get up close and personal with animals from around the world.

It’s been awhile since an Xbox console has seen a Zoo Tycoon game and with the launch of the world’s most powerful gaming console, the Xbox One X, (happy hands clap) what better way to celebrate this franchise with some glorious 4K graphics that go pop! If you have never heard of Zoo Tycoon before, it’s basically a sim where the player takes the role of managing and building their zoo, including populating them with animals from around the world. Sure it follows the template of similar sim games but the developers add some fun tweaks here and there to help draw the player into this amusing title.

Compared to the previous instalments of Zoo Tycoon, the Ultimate Animal Collection edition on the Xbox One X allows for a considerable larger zoo and more importantly, the attention detail has been increased thanks to 4K. As a result, it allows for a much clearer experience and the daily running of the zoo looks more impressive. There’s also a plethora of regular and exotic animals in the title such as platypuses from Australia to jaguars from South America. Another cool feature of the game is the Zoopedia which gives you detailed information about the 200 or so animals that appear in the game. So the game does border a little on edutainment! The most challenging aspect about Zoo Tycoon: Ultimate Animal Collection is the control scheme. Although it’s workable with the Xbox One X controller, nothing beats a mouse and keyboard for sims. Even so, the game is still playable with the Xbox One X controller but it’s a little slower when it comes to the micromanagement aspect. Thankfully you don’t need to rush around too much in this sim. At the core of this sim, the player must ensure the overall management of their zoo which includes keeping its patrons happy and of course looking after their animals. As ‘godlike’ entity over your zoo, you also need to micromanage the park such as ensure correct pricing that allows for more people to visit but also need to make sure that these prices cover operating costs and profit to allow for newer enclosures plus more exotic animals. Add in staffing, including cleaning of enclosures and Zoo Tycoon: Ultimate Animal Collection is a PC-like sim for this console.

The game does offer campaigns which require the player to complete certain objectives, including campaigns from different countries or you can engage in the free-mode which is basically running your zoo without these additional tasks or stressors. Lastly, there is a challenge mode which of course throws a variety of tasks at the player to complete. Also, there’s a four-player multiplayer option as players can manage zoos together and even trade animals with other people from around the world which increases the scope of this title. All in all, it’s a fun title on the Xbox One X with the developers giving players a sturdy sim. Add in little fun min-games where you interact with the animals and explore your part and this title is a game for all ages. Graphically, Zoo Tycoon: Ultimate Animal Collection is a very sharp looking game on the Xbox One X thanks to the 4K Ultra HD visuals and HDR support. Although the game still looks like a sim, the detail really brings this virtual zoo to life, including the small subtitles of what’s happening in this world. Also the colour palette is very fine, particularly with the shades and depth.