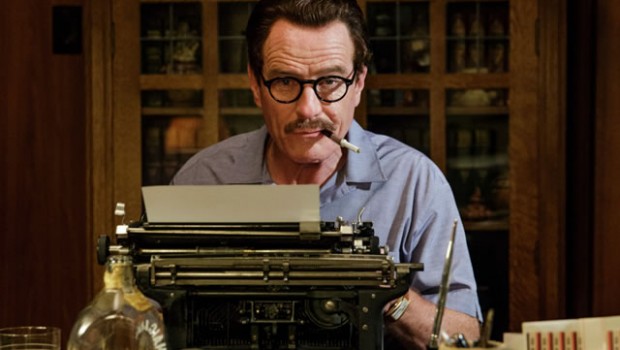 Trumbo always had big shoes to fill but this film doesn’t quite fit. This biopic is based on the legendary, Hollywood scriptwriter, Dalton Trumbo but the script fails to have the same power and gravitas as the man’s actual work (the Oscar-winner wrote Spartacus, Roman Holiday and Exodus, to name a few). Trumbo is ultimately an overlong, political biopic that is pleasant at times but is also let down by the fact that it tries too hard and isn’t quite sure whether it wants to honour the man or simply tell his story.

At one point Dalton Trumbo meant big business. The brilliant and prolific writer was one of the highest paid in Tinseltown. But in the aftermath of World War II, America experienced a state of political paranoia, especially when the Soviets were concerned. This proved a real problem for Trumbo who was a principled and outspoken member of the Communist Party.

In 1947, Trumbo and nine other men became known as the “Hollywood 10” and were questioned about their political affiliations by the House Un-American Activities Committee. The proceedings smelt of a witch-hunt and the group decided they would not name names. They were then thrown into gaol for contempt of congress and upon release were blacklisted from working in Hollywood. But this made Trumbo more determined and ambitious than ever and spawned his career as a talented ghost-writer.

Breaking Bad’s Bryan Cranston stars as the eccentric and eponymous creative. He does a fabulous job of capturing Trumbo’s mannerisms and strange penchants (Trumbo often wrote scripts in the bath while sucking on a cigarette and grasping a glass of whiskey). The film is directed by Jay Roach who is known for his comedy films, Austin Powers and Meet the Parents. The script is written by John McNamara and based on Bruce Cook’s biography. It seems like the ingredients were all great ones but there was a little something lost in the process, meaning this is at best a “good” film. Like the recent Molly TV series, “Trumbo” weaves together archived footage and re-enactments of some famous people (like John Wayne, Kirk Douglas and Otto Preminger). Some viewers will enjoy watching the brief excerpts from Spartacus and Roman Holiday but these do serve as a reminder that this film fails to reach those lofty heights. Trumbo also includes some great cameos by Helen Mirren (as a villainous gossip columnist), John Goodman as Frank King, a B-list film producer and Diane Lane and Elle Fanning as Trumbo’s long-suffering wife and daughter, respectively.

Trumbo is based on some very weighty historic material but it is told in quite a flat and straightforward manner. This means that it is quite detailed and informative but it is certainly not as entertaining as it could be. Trumbo is ultimately a well-acted, timely and relevant film about a dark chapter in Hollywood’s history, it’s just a shame that it lacks the raw power to be considered a “classic”.

Summary: Trumbo is ultimately a well-acted, timely and relevant film about a dark chapter in Hollywood’s history, it’s just a shame that it lacks the raw power to be considered a “classic”.