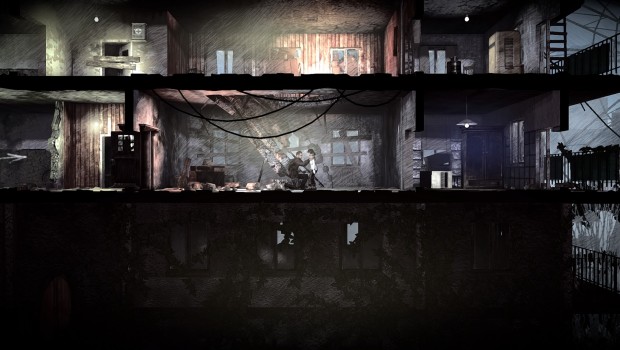 This War of Mine: The Little Ones PS4 Review

This War of Mine: The Little Ones PS4 Review Dakoda Barker
Gameplay
Graphics
Sound
Value

Summary: The Little Ones is light on actual children but heavy on despair. An emotional insight into the impacts of war on civilians, but not a substantial expansion on the original release.

‘War is hardest on children,’ one character, Christo, remarks as he rushes about the ruined apartment building, scavenging and building in an attempt to provide shelter, protection, and food for his daughter, Iskra. She sketches an elephant on the crumbling wall, a few metres beside an unexploded missile lodged in the floorboards. War is hell, we are constantly reminded, but it is even worse for children. Documents found in the ruined hospital support this: when the hospital was shelled, the entire children’s ward was devastated—33 of the 35 patients are killed and the other 2 are wounded.

This War of Mine: The Little Ones purports to offer a new perspective on war, through the eyes of children. And as I watch Iskra mope around the shelter, jump rope in front of a bathroom with a corpse just barely visible through the ajar door, and chase after her father crying for attention and affection, it’s hard to deny that the innocence of children is not designed to survive such brutal conflict. ‘I’m hungry,’ Iskra’s little bio-update reads on our third day without food. ‘We should go to a burger place! Why don’t we?’ But Iskra is the only child. None join us in the shelter. We dare not go out during the day, and none are to be found at night while Christo scavenges in various parts of the city. There is a reference to a teenage daughter when a neighbour asks for help, but no child companions for Iskra to play with and distract her from the nightmares outside. When creating a custom campaign, no more than a single child can be assigned to the group.

This War of Mine: The Little Ones is not about seeing war through the perspective of children; it is about children during war seen through the perspective of adults. Children cannot guard the shelter. They cannot remove rubble, or barter with traders that come to the shelter. They just are—existing to increase challenge, to serve as a mirror reflecting our humanity, to demonstrate just how far the world has fallen. It screams missed opportunity. This War of Mine, the original release, was a novel and transformative experience—it actually presented a perspective on war that was starkly different to the usual glorified shooter affair. The Little Ones is a half-step that engages with the concept of war and children at only an extremely superficial level and leaves a multitude of interesting, unexplored and unanswered questions. The one-child-per-shelter limit paints the inclusion of children as tokenistic and archetypical rather than bringing any meaningful commentary.

The second night, while Christo is scavenging a ruined and still-burning home, the shelter is attacked. Iskra is alone and powerless—the robbers attack and wound her, before making off with a few of our supplies. It’s a harrowing moment—though easily one that could have been worse—but even something this traumatic can be shaken off with an hour of chatting with her father and a day resting in bed. This War of Mine flirts with tackling really serious, horrific side-effects of war—like the make-shift brothel, theft and murder committed against other innocents, and the cruelty of both sides of a conflict towards civilians caught between—but never strays into territory that is too controversial or confronting. Sad about having to kill a homeless man to steal his last can of food so your friends don’t starve to death? Don’t let it traumatise you for the rest of your life, just drink some moonshine and play the guitar until you regain that spring in your step!

What was the most confusing was how long it took me to find any child-related content. I played through an entire 45 day campaign without meeting any children—broken toys were the only indication that I wasn’t just playing the original. Even with its potential ultimately unfulfilled, I still find it strange that promising and publicised content—it’s in the title!—would be squirrelled away, almost like an afterthought. War may be worse for children, but it is primarily about adults.