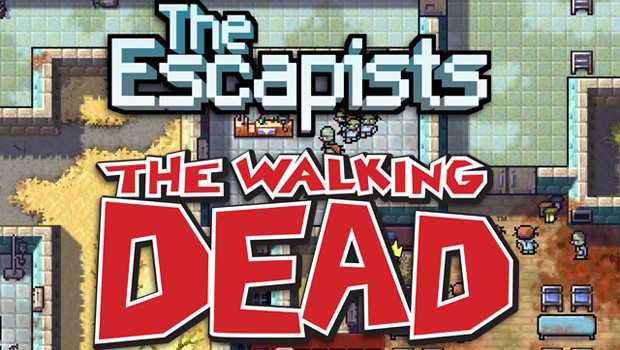 The Escapists: The Walking Dead Review

Summary: The Escapists: The Walking Dead is a fun 8-bit indie puzzle/role-playing/survival simulation hybrid which makes excellent use of the license

The Escapists: The Walking Dead is a standalone mash-up of 8-bit indie puzzle role-playing game The Escapists, mixed with popular comic book series The Walking Dead. Assuming the role of series protagonist Rick Grimes, you’re tasked with leading survivors out of five areas of puzzles, zombies and human threats, using a fun crafting system out of loot you scavenge and completing light RPG-like tasks to level up and keep the group alive. It’s a fun under-the-radar title currently only available on PC and Xbox One, and will appeal to fans of the original and those who love The Walking Dead comics, resource management and survival simulation. The Escapist: The Walking Dead’s story follows a condensed version of the original comic book series rather than the AMC television show. TV show fans will still recognise the basic plot points, characters and iconic locations; the opening level is set in the Memorial Hospital where Rick awakes from his coma into the new post-apocalyptic undead world. Every subsequent level and key scene is recreated in pixel-art form, including Hershel’s Farm, the Prison and Alexandria. All are excellent retro graphic interpretations, and sure to please fans of the comics in particular.

The key objective of escaping an area, along with the signature gameplay mechanics of scavenging, fighting, puzzle-solving and crafting are lifted directly from The Escapists and modified to fit the new zombie apocalypse survival setting. Main objectives in The Escapists: The Walking tie-in to the comic book storyline; for example, the first level acts as a tutorial but also takes players through Rick’s surreal journey inside the hospital and to the famous “Do Not Open – Dead Inside” scene, while Hershel’s Farm is all about building up your survivors to be ready to eventually open the barn to clear the barn of walkers. In this version, daily tasks include attending head count of survivors twice a day, sitting down to meals, and performing tasks for the community that help keep your base secure from the undead zombies outside – and their overall threat to a minimum. Many of these tasks are a bit too easy and on the repetitive fetch-quest side of things, such as finding a lighter or cooking utensils, and I did hope some more complex assignments over time but didn’t get them.

Skipping more than one routine like exercising, cleaning gore or even doing the laundry, though, means you won’t level up as fast. It also increases the zombie percentage and the threat of attack, so it is crucial to manage your game time well. Exploring your surroundings is encouraged and much more fun as you’ll need to find vital components and loot to build tools to assist you in solving certain puzzles. Tools are created in the crafting menu, and can be created by accident just by experimenting with what you have, or discovering them in the environment.

With several tiers in-place which ensure you can only craft more valuable tools from others and a necessity to read in order to increase your intellect to craft certain items, there can be a lot of trial and error involved. Things are mostly left unexplained and that can be both a pro and a con depending on the type of player you are; the time you spend crafting and looting must also be balanced to leave enough time to perform your daily tasks.

Adding to the daily schedule are NPC vendors who appear outside your safe zone at night. They essentially act as a risk-reward mechanic; do you stay safe and sound, or risk going outside to buy some new gear? With money earned by helping survivors around base, time management is crucial to succeed and keep the base going. Ultimately, though, you have freedom to approach the game whatever way you want; you can rush the main objective or take your time scrounging for items, or find all the secrets in each level for good measure. While there’s a lack of hints or hand-holding outside of the first level which acts as a tutorial, I found gameplay flows and works well for the most part, with a natural, steady increase in difficulty as you progress further into the game – which makes it feel like a true 8-bit survival sim. Yes, it did get a bit frustrating to not know what bits were needed to craft a ladder or a weapon, but the sense of achievement I had once progressing without it being handed to me was excellent, and not enough games these days offer that.

Graphically, The Escapists: The Walking Dead will appeal to those who appreciate and love the retro pixel-art associated with many indie titles, and it’s what sets it apart from other zombie-related games out there at the moment. Character models and comic book scenes are true to the cast of the comics even if they’re 8-bit versions, and uses the license well. Things are a little more light-hearted here though, a tone not usually associated with The Walking Dead; dying by enemy results in your character waking up in bed rather than in as food for the zombies, and the soundtrack is upbeat and addictive rather than somber. The Escapists: The Walking Dead is a fun 8-bit indie puzzle/role-playing/survival simulation hybrid which makes excellent use of The Walking Dead comic book license. While there’s only a handful of levels, replay value is high due to the possibility of missing several secrets and other nooks and crannies when exploring, and there are even leaderboards in place for those who love to have top scores and an extra competitive element. While there’s a few repetitive fetch quests, the crafting system and puzzle-solving make for some solid gameplay – if you have patience, love zombies and The Walking Dead and survival-crafting, check it out.