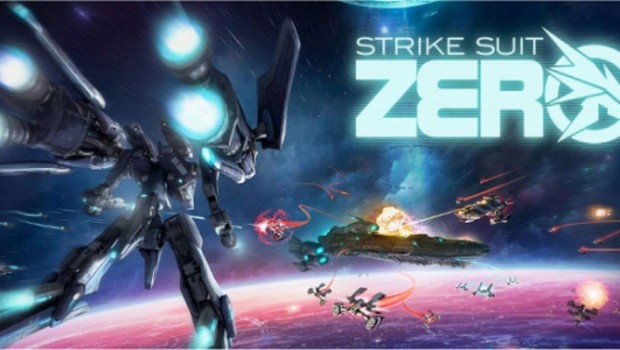 Summary: Strike Suit Zero Director's Cut is a good game on the XBox One and if you have a hankering for this genre than I do suggest you check out this game.

Strike Suit Zero Director’s Cut harkens back to a simpler time of gaming that is reminiscent of those classic arcade space sims as you fought your way through an almost endless number of enemies. It’s almost like being part of Star Wars or Battlestar Galactica as you shoot your way to victory (hopefully) and save the mankind from this dystopian future. Strike Suit Zero Director’s Cut is a classic space combat game that has been brought to the XBox One from the PC. The XBox One version also contains some of the additional DLC’s from the PC version, including two new strike suits. What is a strike suit? It basically allows you to transform your ship into a Mech! The game is also set in the distance future, 2299 to be premise where this interstellar war has broken out and the prize is planet Earth. Although the story is quite simplistic, you play Adams, an ace pilot who has been ordered to fly the Strike Suit, a revolutionary fighter craft that is not only fast but has the armour and weapons to engage in massive enemy fleets. As mentioned, it can also transform into a Mech-like vehicle which is pretty damn cool. Also along the way, you are awarded new upgrades, weapons and ships to help with your epic space battles.

The game boasts 13 missions and depending on the level of difficulty you choose, this can be a tough gig. Even on easy, Strike Suit Zero will give you a challenging time and on the highest difficulty, rage control will become an issue, especially when you have to replay certain parts of the mission due to the sparse checkpoints. Missiles are definitely the key to winning Strike Suit Zero. The game also boasts the PC expansion, Heroes of the Fleet which also increases the longevity of this title.

With missions, many involve escorts as you escort a freighter from point A to B. This is probably the biggest drawback of the gameplay with its repetitive missions and it would have been nice if the missions contained more substance. It feels like both the story and the missions have taken a backseat but given that is only available online, it is almost forgivable. In terms of gameplay, the controls have been well mapped on the XBox One controller and the first level serves as a tutorial which teaches you how to navigate the ship and use its weapons. It also introduces the storyline of Adams, a pilot with no memories and a few clichés thrown into the mix. Sure it may not be the best storyline around but it does the job. As mentioned, the XBox One version contains two new strike suits, the Raptor and the Marauder, each with their pros and cons.

As you fight your way through enemy ships and obstacles, the star of the game is the Strike Suit itself which really adds to the gaming mechanics behind the game, especially its abilities and upgrades. One issue I did have on the XBox One version is that the controls feel a bit more stiff than the PC version and given the weight of the new controller, I did start getting a little tired due to all the dog fights I was engaged in. Needless to say, I actually enjoyed playing this game as it’s been awhile since I played a space combat title. Graphically, the game is quite Spartan looking on the XBox One but the space backgrounds of planets, stars and galaxies is to die for. The enemy crafts are a little basic and so is your first space craft. However as you progress, this does become more detailed. Special effects are good, especially the explosions. The voice acting is okay but some of the characters do sound a little bland. Sound effects are decent but where the audio really shone is through its amazing soundtrack that sounds like some long forgotten musical score from the Middle East or somewhere similar. I really loved the soundtrack of this game.

Strike Suit Zero Director’s Cut is a good game on the XBox One and if you have a hankering for this genre than I do suggest you check out this game. It may not be the most visually impressive game and the difficulty can be a challenge at times but even with its slight flaws, it’s a fun game but just a tad repetitive. Nothing is more satisfying than seeing your shields at almost zero and then somehow saving the day with your amazing space craft.