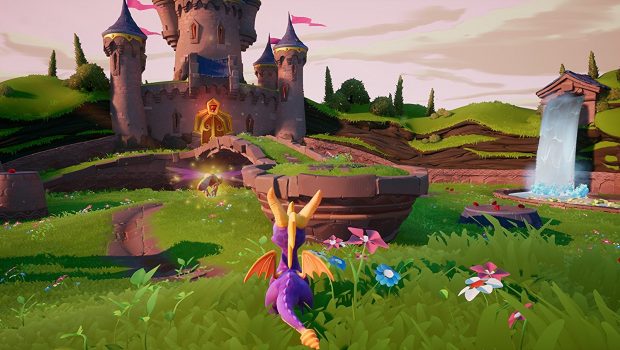 Summary: A relaxing jaunt back into the classic world of 3D platformers.

I’ve become known for reviewing all of those nostalgia-fuelled remasterings of classic 3D platformers, so of course I managed to get my hands on an early copy of the Spyro Reignited Trilogy.

3D platformers were a staple of my childhood. Although newer versions do exist—Yooka-Laylee and A Hat in Time come to mind—the classics of the PlayStation and PlayStation 2 era simply can’t be beaten. The industry seems to have worked that out, and has recently been delivering remasters and reboots of all our childhood favourites, from Ratchet and Clank to Crash Bandicoot.

Some people might feel like Spyro Reignited losing its classic Spyro clunkiness makes it less ‘true’ to its source material, but I think the developers recreated this lovable purple dragon and all of his adventures with great care and consideration. Platforming in Spyro is excellent and when you fall, it feels like your own fault, not the game’s. (Unlike Yooka-Laylee, which I still have so many hard feelings about.)

Still, if you start playing Spyro Reignited and feel like it’s lacking some of that classic Spyro charm, they’ve left you with plenty of options to revert the control scheme and music to what you remember. Don’t instantly change everything back though; it’s worth experiencing the new controls and music to see how polished it all feels. With all of these nostalgia settings, I was most confused by the choice not to include subtitles in any of the options. Some of the dialogue has textboxes in game, but all of the hints and tips that the dragons share with you as you rescue them in the first game aren’t subtitled. It’s unfortunate for people who need subtitles to engage fully in a game experience.

The game files were a huge initial download (60+ gigabytes) but when you start to explore the regions, it’s easy to realise why. So much effort has been put into the art in Spyro Reignited; the unique beauty of each biome has been remarkably captured. Every character also received a serious art overhaul, with Hunter and Sheila almost unrecognisable from the classic games. Again, these changes might bother Spyro purists, but I feel like every change has been made in a way that heightens the source material.

The Spyro Reignited Trilogy is a seriously good remaster. It’s a relaxing and comforting jaunt back into the world of the classic 3D platformer and it was a joy to re-experience all of these worlds with Sparx by my side. If you played Spyro growing up—or always wondered what the fuss was about—there’s something in this for everyone, and I hope that we see some new young Spyro fans as a result.