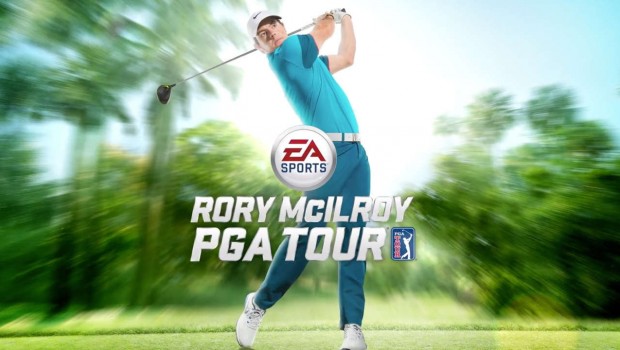 Summary: Much like its new cover star, Rory McIlroy PGA Tour is a ultimately a much more dull and less flamboyantly showy effort than the previous Tiger Woods affairs.

With Tiger Woods’ spectacular downfall well and truly complete, EA has returned with a new cover star and the first PGA Tour title for two years.

Straight off the bat, I know nothing about the world of professional golf so I’m not at all familiar with Rory McIlroy himself, although he obviously has the skills to be considered a suitable replacement for Golfing’s fallen superstar, even if he does come off as a tad dull. The first thing you’ll notice about Rory McIlroy PGA Tour is that the entire experience has been stripped back to the bare minimum. After a lengthy tutorial guided by McIlroy’s monotone narration you’ll gain access to the menu screen and instantly find that the game is devoid of many of the features and content that made the license the king of golfing sims.

Firstly, a large proportion of licensed professional players are missing, limiting selection to a select few that don’t include any female or classic historical players. The number of courses barely number half that available in Tiger Woods PGA Tour 14 and the career mode is skeletal, at best, and completely devoid of context at worst; your only real reward for playing through the arbitrary disjointed “career” mode is a static congratulation screen and the high stakes sensation of battling the masters for golfing supremacy is all but missing here.

The one redeeming feature is the ability to choose between playing the traditional four rounds of all 18 holes or only the four most important hole of each round, making for a much faster experience that forces you to change up your strategy to accommodate for the limited number of plays. The game mechanics are as solid as ever, with three separate control systems that can be modified to fit any difficulty or playing style. There’s an arcadey analogue system that uses the thumbsticks and allows for quick and easy play, the classic power gauge system and an option for a realistic Tour mode that removes any assists.

Sending your ball soaring down the freeway is as satisfying as ever and the putting, whilst noticeably touchy at times, is generally intuitive and easy to grasp. Overall, gameplay wise it’s more of the same refined golfing experience fans have come to expect. But the missing modes… Oh Lordy, the missing modes. Online has been pared back to two generic options – Stroke and Match Play – and there’s no sign at all of classic standard modes like Battle Golf.

There’s a half-hearted new feature dubbed Night Club Challenge where players are tasked with completing 170 brief challenges in order to obtain a three star rating. Despite featuring teleportation portals and other quirky power-ups, Night Club Challenge just comes off as an undercooked effort that does little to make up for the bare bones offerings of the rest of the game. Rory McIlroy PGA Tour has apparently been built from the ground up using the Frostbite 3 engine, making for an aesthetically appealing visual experience that accurately replicates the course and players on show. Unfortunately the game suffers from a noticeable amount of pop in, stilted player animation and flat textures that detract from the overall graphical gloss. The cinematic camera is used to great effect and shows the game at its prettiest, with the foliage and water effects particularly stunning.

Audio is comprised mainly of ambient environmental sounds, the quiet murmur of the crowd and the occasionally snarky remarks of the commentators. The commentary matches up with the on-screen action for the most part and phrases don’t tend to repeat all that often, although if you’re prone to making mistakes you’d better develop a thick skin, as some of the comments regarding your abilities can be rather cutting. The stripping of established features and modes is a curious decision on EA’s behalf – You’d think that, as with most other yearly sporting iterations, that the focus would be on innovating and building upon a proven foundation rather than unnecessarily streamlining the experience.

The entire bare bones affair just smacks of plans to implement future DLC modes, which would be pretty shady of EA if this were to come to pass and the extra content wasn’t offered up for free. There’s really no excuse for offering loyal fans less than half of the content offered in previous iterations, and the new graphics engine, minor gameplay refinements and blatantly tacked on challenge modes are little consolation for the ghost town of a roster and the limited selection of courses.

Rory McIlroy PGA Tour is the first EA PGA title to not feature Tiger Woods since 1998, but I don’t think any fans anticipated that the departure of Golfing’s golden child would also mean that the game would, in essence, start everything over again from scratch, removing classic modes and a buttload of content.

Much like its new cover star, Rory McIlroy PGA Tour is a ultimately a much more dull and less flamboyantly showy effort than the previous Tiger Woods affairs and, despite offering arguably the best golfing simulation experience currently available, is hard to recommend based simply on the removal of so many key features.