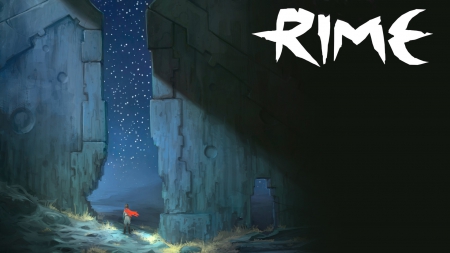 Summary: Rime is a unique and whimsical journey that puts the awe back into the videogaming experience.

With Rime AND Reason...

Every so often a game comes along that serves to remind you just why this medium is so amazing as both an interactive experience and as a form of delivering a narrative.

It should be noted before I delve into this review that I count Ico, Shadow of the Colossus, Journey and the Zelda series among my all-time favourite gaming experiences, so a game like Rime was always going to grab my attention. From the moment the first teasers dropped showcasing the gorgeous cel-shaded graphics, more than a little deliberately evocative of Wind Waker, and the lonely struggle of a young boy attempting to survive in a fantastic environment, my curiosity was piqued.

You take control of the aforementioned boy, dropped unceremoniously upon an island that hides away myriad secrets; the island itself appears to be relatively serene but a sense of foreboding hangs ominously over proceedings. You’re never given clear direction in Rime or any real explanation as to the boy’s past or purpose; as you slowly start to explore the island you’ll stumble across artefacts that shed some light on the backstory, showing a grieving monarch with an inquisitive and familiar young charge, but an air of ambiguity consistently colours the game and you’ll find yourself spending the first few hours puzzling over things like just how exactly is that fox spirit connected to everything, who is the mysterious figure in the red cape who watches silently from afar and is the source of our protagonist’s vivid red cape, what tragic fate befell the bipedal robots who lay littered about the place and much more.

Rime is an enigma for the player to unravel and the experience becomes all the more satisfying with each successive layer you peel back. The delivery of the controls are subtle and intuitive and, like much of the game, come naturally to the player. This isn’t hyperbole either – Probably Rime’s greatest strength is the way it can make you feel completely and utterly lost at all times yet somehow effortlessly send you through each area without any real form of guidance. It’s kind of hard to describe but you’ll enter an area at a complete loss as to how to proceed and yet somehow fumble your way to a solution due to the impeccable design of each stage.

At its core Rime is a game built around environmental puzzles, with most antagonistic forces amounting to little more than mere annoyances… Until they start greedily feeding upon your essence, that is. Puzzle scenarios unfold in a natural and logical manner that immediately feels at place within the rules of the game’s world. Whether you’re aligning geometric shapes from a pedestal, rotating entire rooms in order to manipulate seals or even playing with the fabric of time itself, the puzzles of Rime manage to maintain that balance between challenging and frustrating almost effortlessly… You’ll never be stumped for more than a few minutes on any given puzzle.

Some other areas aren’t quite as forgiving, however; for example, after carefully avoiding ravenous flying beasts circling above me, intent on devouring my juicy boy bits, for nearly an hour, I found myself on a long walkway with a recently felled beast hot on my heels. No matter how “hard” I ran, I consistently came short of safety, and without any clear button for run I couldn’t figure out how to get to the next area. To be entirely honest, I’m still not entirely sure how I managed to finally sprint out from beneath the shadow of that winged terror and it was during this section, as well as maybe two others, that I felt that the game unfairly locked you into an action sequence where you were at a clear disadvantage.

Of course, I could have also overlooked some incredibly obvious item that would have alleviated all of my issues and thus rendered my complaints moot, so I can’t entirely say that these encounters were intentionally designed that way, especially when taking into consideration how accomplished the game is in literally every other area… It seems a bit weird then that two or three glaring difficulty spikes would somehow slip through to disrupt the otherwise perfect pacing of the game. Rime is obviously going to draw unavoidable comparisons to the graphical style of Wind Waker and I’d be the first to admit that, on the surface, both games do look rather similar. This is a testament to the efforts of Tequila Works, as even over a decade later Wind Waker holds up as one of the best looking games ever made. The fact that Rime then manages to surpass this extremely high visual bar in almost every area is to be commended (Enemy design is notably lacking compared to the Zelda series, for instance, but then again that’s not exactly Rime’s focus).

Performance does suffer a little in order to bring you these lavish graphics, at least on the OG PS4; the frame rate would get choppy fairly frequently and there was one or two instances where an object loaded in a few seconds after it should have, but these hiccups ultimately didn’t serve to be detrimental to my enjoyment.

The soundtrack and ambient sounds are also of the utmost quality, really evoking the sensation of being stranded in a strange and alien landscape. There’s no dialogue to speak of but the sounds of the island in conjunction with the crumbling remains tell their own story in a way that, to me, is much more effective and satisfying to decipher than a few exposition filled cutscenes. I initially mentioned my affinity for games like Ico and Journey earlier in order to quickly paint a picture in the reader’s mind of what kind of game Rime is. Using comparisons is a simple, if somewhat lazy, way to easily convey a genre or narrative direction of a game, and, much like those games are their own entities, Rime shares as much in common with those titles as it does its own thing.

Rime is a unique and whimsical journey that puts the awe back into the videogaming experience. The pensive mood belies the quick paced structure of the puzzle design and the framing narrative is at once affecting and abstruse. An almost meditative odyssey of discovery, Rime is one of the standout games of the year so far and should be on the top of every puzzle and adventure game fan’s list of purchases.