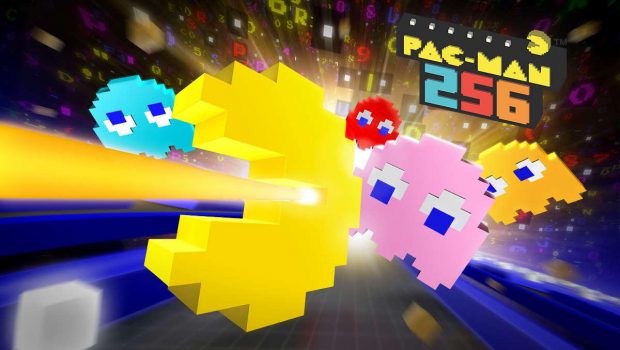 Summary: Pac-Man 256 on the PlayStation 4 is not only nostalgic but provides some quick fun!

Nodding to the past whilst winking at the present, Pac-Man 256 is a game that was released to Android and iOS users last year. As some of you might know, in the original game level 256 had a glitch that made it a kill screen. The bottom of the maze became a mess of numbers and characters. Once Pac-Man hit that mess you were dead. And now, its been brought back in a very neat way. 256 takes your normal game of Pac-Man and develops it as an endless maze runner. Single or Multiplayer, this game is addictive enough to play a LOT and I would say that it will stay on your PS4 as that quick game to have a play of. Which to be honest it will sit there for a long time as it is extremely addictive. Basically 265 involves getting your standard maze, flipping and making it 3d and then getting Pac-Man to race upward whilst chased by ghosts and the presence of the 256 glitch itself which is a key part of the game.

This is a really innovative way to freshen up this title. The presence of the 256 chasing you keeps the sense of urgency going just as the new abilities of the ghosts are also there to contend with. The black ghost for example will sleep then chase you when it wakes up, Pinky will sit still until it sees you then chase you until you move out of direct view, and of course Blinky the red one hunts you down with a ferocity and unlike the others, he is capable of trying to outsmart you. The maze itself is cleverly thought out as it progressively appears on your screen. Items and ghosts are randomly dropped as you make your way through, and there are a number of new weapons that Pac-Man can use including freeze, laser, traps etc. They are cool powerups and you are going to need them whether in single or multiplayer mode.

Something that is also neat about multiplayer is that while you compete you also work together, and if one of you dies, another player can revive them by running to the spot that the game puts the body of the dead player. It’s a really cool feature of this title and can increase the overall game time significantly. Graphically this game is nice enough to look at but in no way redefines Pac-Man. It has a really nice and bright interface, fairly crisp graphics that look new but remind you of the old at the same time. There are several character models to choose from, from the original Pac-Man to the updated 3D one, a laser Pac-Man, to a robot and a chicken. The chicken looks like the chicken from Crossy Road if you are really curious.

The audio is crisp and clear. Original sounds are still in the game which is very cool. There honestly is not a great deal to report here. The sound is solid and suits the game. That’s about it. In terms of value, this one is a keeper. At the moment it sells on the Playstation store for about $5 or so depending on where you live. It’s just over 100mb and is instant jump in and out fun on your console. I do think it is well worth having in your library at the very least so you can access it any time you have at least three mates over as it does support up to four players which is pretty darn sweet.

A great bit of fun which if you really want you can try it on your smaller devices first, I found it for free in the itunes store, but on your television it really is a title that is fun, addictive and even your least games inclined person can get into with very little effort.