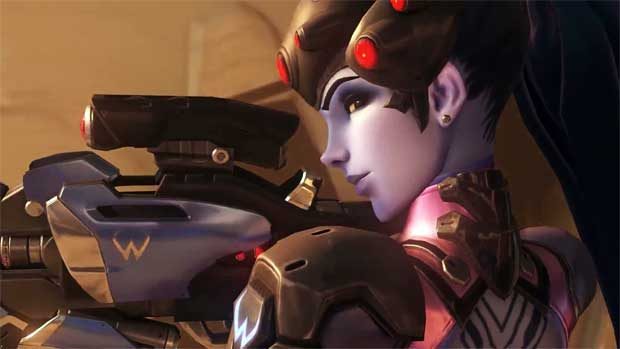 Summary: Overwatch on XBox One is a very unique and entertaining shooter that is like being transported into a Pixar movie!

I need a hero!

The highly anticipated team-based first person shooter Overwatch from Blizzard Entertainment is finally here that is beautifully presented on the XBox One with some detailed world-building and amazing graphics to complement the gameplay plus some MOBA features thrown in for good measure. This is not your dad’s first person shooter because how different the characters are, their abilities and the world that you play in. It’s quite a clever twist on what you know actually. The story of Overwatch is set the distant future where the world has been split due to artificial intelligence and a robot uprising, so when things go haywire, it’s time for a group of heroes to be born that is told through some great use of CGI cinematics. Also and just like the classic Bonnie Tyler song ‘I Need a Hero’, this is what the shooter genre needed and Blizzard really delivered because it’s definitely not like your mainstream Call of Duty’s or Battlefields that are dark and dreary! On the contrary, things are a lot more brighter! The game world of Overwatch is quite varied and level design is well-thought out and detailed. More importantly, the 12 maps that you visit showcases this futuristic world well and I love the different locations such as the almost Blade Runner like Japan or futuristic Africa which adds to the overall strategy. Needless to say, the environments definitely add to the longevity of this title as they are so different in nature with lots of places to explore and hide. Character design is another highlight as each character looks completely dissimilar and it’s not all men carrying guns! The gameplay of Overwatch supports three modes that include assault, control and escort with 12 maps to play. Each map has lots of ‘secrets’ and do need to be played over and over again in order to explore, memorise and know your surrounds to get the upper hand. Furthermore, assault has one team attempting to capture certain places on the map with the other team defending them. Escort requires one team to protect a payload and safely move it to their intended destination while the other team attempts to prevent them. Lastly is control that requires each team to control a very part of the map and was probably my favourite mode because of how chaotic if was. There are also 21 characters included in the roster of Overwatch with each character having their pros and cons, so finding a favourite will definitely be a challenge but it does use traditional archetypes (offense, defence, tank and support) plus customisations options. For example there’s the duel-wielding Tracer who has the ability to ‘time travel’ and ‘blink’ that is quite strategic on the battlefield but she is not the most powerful character in the game. If you want someone with power, that would be Winston the Gorilla who dishes out massive damage and to multiple targets. He also has a special ability called ‘primal rage’ which amplifies his melee attacks, not to mention jumps but of course, when it comes to speed, that would be another character. So part of the charm of Overwatch are the characters because of how diverse they are! Also, Overwatch has a good matchmaking system but best of all, the gameplay and combat is accessible to all gamers, whether hardcore fans of first person shooters or those wanting to dabble, it’s definitely a fair system. More importantly, the gameplay feels VERY sturdy and fluid on the XBox One with good controls that merge well with the in-game mechanics. Furthermore, teamwork plays a huge part of this game so you do need to ensure that your team is well-balanced in order to give you a decent chance at winning. This means you need to protect your weaker members such as support and defence that can be a challenge in this 6v6 title. Weapons and equipment are equally as diverse as the characters and whether that’s shurikens, mines or guns, everything has a place. You can even do rocket-jumps if that’s your style as well and that’s another shining light of Overwatch because it caters for numerous strategies in this addictive shooter.

Graphically, Overwatch does feel like a Blizzard game but that’s a good thing because it has its own stylised graphics which looks great on the Xbox One. Characters are well detailed and have this cartoon aura (think Big Hero 6) to them and the environments are nicely detailed, including all the special effects and lighting. As mentioned, Overwatch is a colourful and bright game that just jumps out at you. Audio is equally as good from great voice acting and truly thumping sound effects. At times Overwatch does feel like an old school multiplayer shooter but Blizzard has a knack of taking something classic and making it better. The gameplay is fun, the characters are diverse and really make you think, especially when their your enemy! Apart from more realistic first person shooter, this multiplayer game is filled with colour and looks like something out of Pixar which definitely makes the game more fresh, not to mention the clever gaming mechanics. So whether you own an XBox One, PS4 or PC, Overwatch is a game for everyone and on that note, I’m going back to play this awesome line shooter!