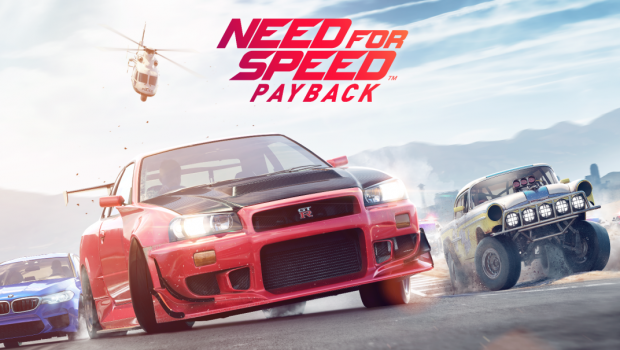 Summary: Terrible narrative aside, Need For Speed: Payback is a fun addition to the prolific racing franchise

Need for Speed is one of gaming’s most well-known and illustrious franchises. With over 20 games spanning back to 1994, the franchise has endured a rollercoaster of quality over the years and it’s no secret that the series has been on a decline since it’s mid 00’s peak. In an attempt to course-correct the Need for Speed reputation, EA broke its annual game release cycle to spend an extra year on 2015’s reboot (simply titled Need for Speed), to disappointing results. Claiming to have learned from their mistakes, this year’s release also underwent a two-year development cycle – but unfortunately, Need for Speed: Payback isn’t the podium finish we were hoping for. For those unfamiliar with the Need For Speed franchise, the series has changed its focus numerous times over its 23 year lifespan, but the one thing that almost every game has in common is an emphasis on a dramatic, single-player story mode revolving around racing, and that remains true for Need For Speed: Payback. Unfortunately, Payback has also set the bar for possibly the most ludicrously stupid narrative the series has seen so far – and not in a good way.

The game begins with the scene depicted on the front of the box where we get introduced to our main characters Tyler Morgan, Mac and Jess racing through the desert exchanging snide banter on their way to a street race that the group has rigged. It’s in this opening scene that you’ll begin to learn that the main character Tyler, is a boring, lifeless, Paul Walker rip-off, whereas the other two characters have far more interesting characterisations and backgrounds.

Eventually you arrive at Fortune City (a blatant Las Vegas analogue) to begin the race. To summarise the next hour of nonsensical cutscenes and phone conversations, your plan to steal an expensive car from a wealthy investor is foiled by the local crime syndicate, known as ‘The House’. You then become indebted to this investor and must compete in a number of racing challenges in order to be invited to a Cannonball Run-esque racing challenge where you plan to take your revenge on The House by beating them, thus causing them to lose all their street cred. It’s a head-scratchingly dumb story that makes very little sense, but ultimately it passably services as a framework for the gameplay. Thankfully, the gameplay is fun enough that you can ignore the story almost completely. Payback retains the open-world design from many previous Need for Speed titles and as the story progresses, you’ll be driving around EA’s version of west coast United States to compete in various racing events in order to acquire cash, cars and cred. You’ll also frequently swap between each of the main characters, all of which have a unique driving specialty (Tyler is the racer, Mac is the drifter and Jess is the getaway driver), depending on the type of racing event you enrol in.

The driving mechanics lean more toward the ‘arcade’ side of the racing game spectrum rather than the simulation side, and for the most part feel pretty good. You’ve got a boost meter that fills over time and can be used at any point for a quick hit of acceleration, which when combined with the loose drifting mechanics, means you’ll be constantly rising and falling in the position ladder throughout a race. Calculated use of this boost meter is also critical for success on Jess’s getaway missions where the aim is to reach your destination by wrecking a bunch of pursuing cop cars, which is also quite fun. On the flip side of this, you’ll often be competing in Mac’s drifting events where the drifting mechanics have been modified to make it easier to slip into and out of a ‘drifting’ state. I found these events frustratingly difficult as the modified drifting mechanics made the driving feel far too slippery and difficult to control.

As you complete events, you’ll be rewarded with car parts that can be used to upgrade your vehicles. Similar upgrade systems have been adopted in previous NFS titles, however Payback’s take on the system is a disappointing sign of the times. After completing an event, you’ll be presented with three face-down cards, which upon selection, reveal an upgrade that improves the stats of your car (you can also acquire new parts from lootboxes, however I never felt compelled to purchase any). None of these upgrades come with statistical trade-offs, so with every new upgrade you’ll always either replace an old part with a new one that has a higher number on it, or you’ll sell it for cash.

That being said, the system used to modify your car’s aesthetics is far more interesting and makes good use of the game’s open world design. Littered throughout the world are a number of small challenges similar to those in the Forza Horizon series, such as breaking a speed record on a particular road, or smashing through a number of signs. Completing these challenges unlocks visual modifications for your vehicles and provides a fun incentive to explore the open world.

When you look at it as a whole, Need For Speed: Payback is a fairly decent package. The driving is fun and with over 15 hours of single-player racing plus a rather standard but competent multiplayer mode, there’s plenty of driving to do. The narrative itself is one of the most bizarre and uninteresting I’ve seen in recent memory, but tricking out your whip and boosting it around a track is fun enough to stand on it’s own – so don’t hesitate to skip through the cutscenes. If you’re looking for a simple racing game to turn on and tune out, Need For Speed: Payback isn’t a bad road to go down.