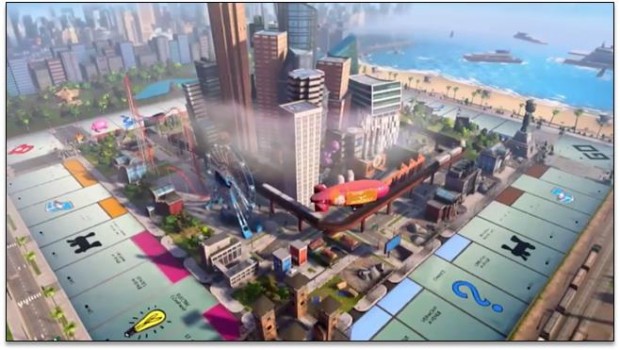 Before virtual gaming and during the era of pinball machines, physical board games were like video games which allowed people to interact and play with others and Monopoly was the King. Monopoly was a game of rags to riches with a healthy dose of “chance” thrown in for good measures. As players rolled the dice, they could dictate the gameplay as they bought and sold properties into to become the last player standing with a very healthy bank account.

Although there’s been several virtual incarnations of Monopoly from consoles to smart phones, Hasbro has joined with Ubisoft to create the next gaming instalment on next-gen consoles that include the Xbox One (reviewed) and the PlayStation 4. However opposed to a top down view like the original board game, Ubisoft have recreated the world of Monopoly in 3D that looks like something out of Sim City which looks amazing in FULL HD as does the cartoon-like animation. The Monopoly Family Fun Pack also boasts three different versions of this popular board game that include Monopoly Plus, My Monopoly and Monopoly Deal. My Monopoly basically uses the original Monopoly board game but allows the player to tweak the board such as adding their own pictures or even giving names to the various properties on the board.

This includes a whopping 120 different Monopoly inspired pieces that include both 2D and 3D models. In essence, it allows you to create your own Monopoly board games. Next up is Monopoly Plus is the classic Monopoly board but has been transformed into 3D which once again looks a treat on the XBox One. This version allows up to 6 players that can be played both locally and online. Lastly we have Monopoly Deal that is based on the card game from Hasbro. Unlike the board game, this game uses a deck of cards which requires the players to collect property sets of the same colour but as an additional twist, you can steal cards from other players or even demand money from others via the action cards.

It’s also a faster game than the above and is enjoyable enough, although I must admit that the virtual interpretation is a little stagnant. This game also supports up to 6 players as well. Another cool fact is that we played the original Monopoly board game on the weekend and boy was it boring… the virtual game is definitely superior, although I would probably rather play the real game than Monopoly Deal. The Xbox One version also supports the Smartglass application that actually allows you to manage your properties and money via this second screen. Another next gen feature is that the game uses the Kinect 2 to take photos of your gameplay which then gets shared on the game. My one gripe with this collection is that you need to register before you can play.

Although virtual board games are a little like virtual pinball games, they’re fun for a short amount of time but they don’t beat the original real-world mechanics when you have the same players in the same room. Nonetheless, it’s beautifully presented on the XBox One with great graphics, fun sound effects and an entertaining soundtrack!