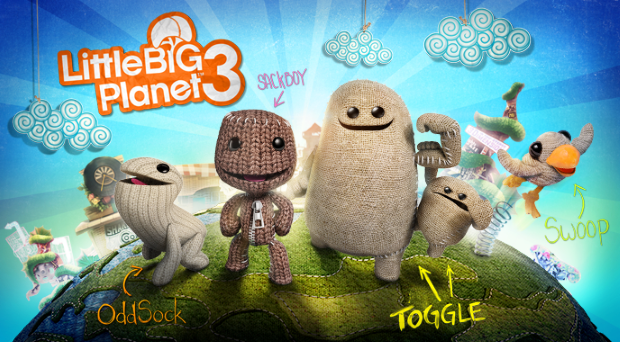 Summary: Although not as tightly refined as some other 2D platformers, like Puppeteer, for instance, Little Big Planet 3 offers up tons of fun for those willing to seek it and, with the promised patches on their way and a creative community that’s growing by the day, hopefully it won’t be long before this is the ultimate Little Big Planet experience.

Gracing the PS4 for the first time and with a new developer, Sumo Digital, at the helm, the wonderfully whimsical Sackboy returns in an all new adventure and this time he’s not alone.

As you may have gleaned from the advertising materials, Little Big Planet 3’s main focus has been upon the addition of three new characters, guardians of old who must be summoned by the player throughout the main campaign. Firstly there’s Oddsock, basically a dog with the ability to run up walls and increased agility and Toggle, who has the ability to switch forms between a heavy, lumbering hulk useful for weighing down switches and smashing through objects and a much smaller and swifter character who can run across water and access hidden areas.

Finally, there’s Swoop, a birdlike character who can fly and utilise a swooping glide to quickly pass through areas; each character adds a different element to the game and their inclusion demands that the player approaches each obstacle in a variety of ways but they also seem ultimately underused, with the formula usually going as such: Unlock character, use their special ability to progress to the next world and then neglect said character until the final confrontation. It was also disappointing to find that I couldn’t switch between characters at will, instead having to use portals at preordained locations; this isn’t an issue in many of the player created levels though, which offer the option to let players switch characters of their own volition, so this goes some way towards alleviating any sour grapes in regards to the campaign.

The campaign follows Sackboy and his compatriots as they attempt to  save the world of Bunkum from annihilation at the hands of the corrupted Newton (Voiced by Hugh Laurie), who plans on releasing ancient malevolent entities know as the Titans to help him rule the realm with an iron fist and deprive all of Bunkum’s inhabitants access to creativity. The addition of voice acting is a pleasant change and, as always, Stephen Fry returns to lure gamers into the world of Little Big Planet 3 with the dulcet tones of his velvety voice. One problem with the campaign though is that it’s incredibly short, with most likely to complete it in a sitting or two. There is some replayability to be had in using unlocked abilities to get to previous inaccessible areas but most players will quickly breeze through the short, albeit nicely designed, levels.

One of the most useful additions in this iteration is the Sackpocket, which allows you to store and quickly select the various upgrades you pick up along the way. These upgrades take the form of gadgets you can use to traverse areas otherwise locked off to you, such as a hook hat that attaches to rails, a torch that reveals secrets hidden in paintings, a vacuum pistol you can use to either propel or suck objects towards you, a teleportation orb and a pair of extremely unwieldy rocket boots. The upgrades offer a welcome change from the core mechanics of the game, offering more variety than your usual run, jump and pull antics and if you’re as obsessed about collecting bubbles as I am then these tools are integral to that elusive 100% completion.

You also have the option of tackling the stages with up to three other players, with certain areas only accessible in co-op, but the matchmaking system could use some refining – I wasn’t able to join a single game and only received one request to join mine throughout my time with the game. As always, every asset used to craft the levels in the main campaign are accessible to community creators and the varied selection, encompassing a myriad of themes, plus the option to import and play levels created in Little Big Planet and Little Big Planet 2 ensures that there is a wealth of activity for players to explore once they’ve completed the campaign.

The content creator is the main draw behind these games and LBP 3 doesn’t disappoint in this regard, with a whopping 16 layers available to players, a massive increase from the previous games. The game eases you into the basic tenets of creation through the use of Popit puzzles, eight mini games designed to alleviate the daunting prospect of diving in and creating your own worlds. Little Big Planet 3 is a joyous romp while it lasts but, unfortunately, it’s not without its flaws. Firstly the loading times are quite long considering the brief nature of the levels; the limited amount of stages in the story mode also seems like a bit of a missed opportunity, but it’s the horrendous bugs and glitches that plague certain levels that drag the game down the most.

As mentioned above, the control scheme for the blast boots is extremely hard to get to grips with, as is Swoop’s diving ability, both of which become key factors in completing the punishing final few levels. Trust me, you’ll fling your controller in frustration more than once when you fail yet again to navigate Swoop with some degree of precision throughout and electrified passageway filled with rotating wheels; this sudden increase in difficulty is also a bit concerning, feeling a bit like a cheat to artificially extend the length of the game. Once particularly annoying bug I encountered in Little Big Planet 3 was Toggle’s smaller form appearing invisible during the final confrontation, making the precise jumps and manoeuvres nigh impossible to perform due to having no visual feedback; on more than one occasion, I also had to complete the same level twice because my game had decided not to save my progress for some reason.

These issues hampered my progress and level of enjoyment at times to an alarming degree and I hope that the promised upcoming patches give the game some much needed stability, as in its current incarnation Little Big Planet 3 requires some TLC. Little Big Planet 3 looks a delight on the PS4, with the lavish 2D stages absolutely resplendent in detail and character; you can almost feel the wool and other textures, they’re so lifelike. The audio is also quite good, especially the voice acting and the jaunty ditties that accompany the levels, although I did encounter some synchronisation issues here and there.

Overall though, aesthetically Little Big Planet 3 is a gorgeous accomplishment and the wide variety of themes and materials available for content creation makes for an almost endless sandbox for the creatively inclined. Media Molecule created something magical with the original Little Big Planet games and, for the most part, Sumo Digital has managed to retain the essence of what makes this series such a joy to play.  However, in some departments this doesn’t feel quite like a fully fledged Little Big Planet entry, even with the jump to current gen consoles.

The game certainly has immense potential but the various glitches and occasionally wonky control scheme holds this entry back from being the definitive Little Big Planet experience.

Nonetheless, long time fans will be much more forgiving of the game’s flaws than newcomers, and the thriving online community and infinite levels available for play ensure that punters will more than get their money’s worth.

Although not as tightly refined as some other 2D platformers, like Puppeteer, for instance, Little Big Planet 3 offers up tons of fun for those willing to seek it and, with the promised patches on their way and a creative community that’s growing by the day, hopefully it won’t be long before this is the ultimate Little Big Planet experience.