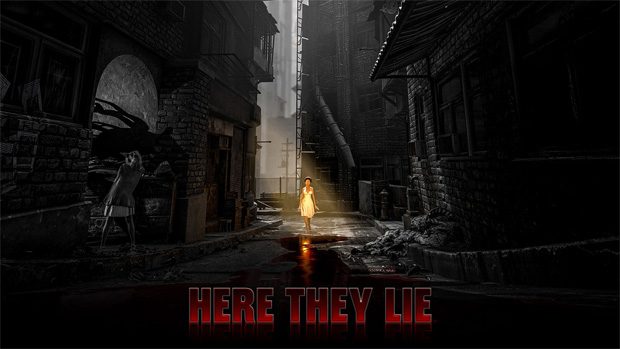 Summary: Here They Are Lie is a clever game but suffers from inconsistent controls and motion sickness.

Here They Lie successfully combines horror with the PlayStation VR and will definitely make you jump out of your seat as you second guess the reality of this gaming universe. It’s also one of the first PlayStation VR games that actually made me a little queezy at times due to the gaming mechanics that forced me to remove the headset in order to disconnect with the game. For me, this was the movement in the game because of its interactive nature and how responsive the environment was. The game even suggests you take a break after you have completed a chapter as well so I’m guessing some the developers and QA testers had some issues as well.

In terms of story and without spoiling things, Here They Lie is about discovery and piecing together the mystery that unravels in front of you… sure it’s cliched but I don’t think I flinched, jumped and swore as any other game before thanks to the mischievous game developers who really know where to put those frights into their virtual gaming world. The game also starts quite innocently as you meet this mysterious and beautiful woman named Dana in a yellow dress and before you know it, you’re thrown into this hellish horror. The story is also prompted by narratives that are carefully placed through this virtual world that give you a deeper insight into the ‘madness’. Given that, Here They Lie is a slow moving game which really sets the scene and definitely kept me on edge as I attempted to finish this PlayStation VR title. Dana also reminds me of Elisabeth from Bioshock Infinite who plays a link to your sanity or perhaps the real world? Controls are a mixed bag, especially with the head motion and physical controls which did take some time getting used to. Add in a few puzzles, creepy encounters and lots of clever lighting techniques and even though it’s not the best VR game on the planet, it’s still quite a clever experience that showcases this technology. The story is interesting, including some the areas that you explore and overall, it’s worth checking out. I just hope that these developers improve their control systems on future games.

Graphically, Here They Lie is a well presented game on PlayStation VR some strong level design and detail which successfully captures another era and world. As you walk through these streets of both normality and madness, you really get a sense of immersion and the VR headset really helps as no matter where you look, it’s like you are actually there.

It’s also those moments when you look one way and then suddenly look back, only to see something totally unexpected and at times damn scary looking right back at you. Creature and human design is interesting and although not realistic, their designs suite the stylised look of Here They Lie. The audio department of the game complements both the gameplay and the graphics, especially those subtle noises that you hear and to really maximise the sound in the game, a headset is definitely a must have device. Here They Lie is a clever game for the PlayStation VR and its motion sickness does make wonder whether this game would be better suited for the PS4 Pro for faster framerates. The game’s momentum starts slow and every now and then the game will really make you jump which is where the developers have succeeded. However in terms of gameplay, it is a little light in its nature but the nonetheless is an interesting look into both the horror genre and into the psyche of the main character in this horror thriller.