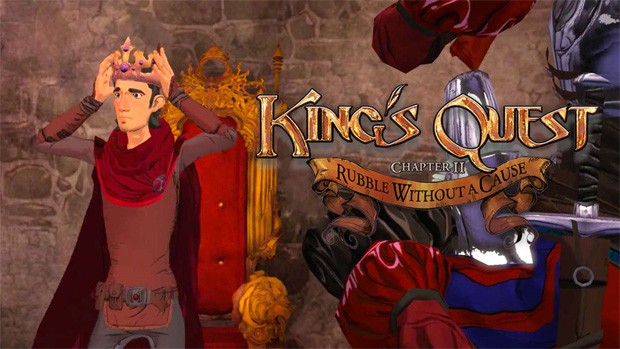 King’s Quest Chapter 2 – Rubble Without A Cause Review

Summary: King Graham back and he's causing trouble in King's Quest Chapter 2 – Rubble Without A Cause!

Reboots, “re-imaginings” and reworks seem to be craze at the moment and Sierra’s classic adventure series is no exception to this rule as developers The Odd Gentlemen have revisited the old point and click game with a true 21st century makeover. Who would have thought that Roberta William’s 1984 game King’s Quest would be part of our next-gen gaming diet.

However like other developers such as TellTale Games, The Odd Gentlemen are releasing the new King’s Quest series as episodic releases that in the last episode saw the soon-to-be King Graham enter the knight’s tournament and help cement this mythology. It boasted some beautiful graphics and world building that still paid homage to the retro point click titles of yesteryear. Sure it may not reach the heights of fond memories like the original series but it definitely brings both old and new gamers together.

Chapter 2 of this series, Rubble Without a Cause slightly deviates from the more comedic episode one as Graham’s life is once again thrown into turmoil when those nefarious Goblins create all sorts of hijinks when he and his friends from the Kingdom of Daventry are kidnapped. So while Graham seeks for a way out from the underground stronghold of the Goblins, he also needs to ensure that his friends are looked after that gives the gamer some very difficult choices to make.

Needless to say, player choice does effect the story in similar ways to titles such as The Walking Dead or Life is Strange, with your decisions creating repercussions later in the game and the series. So while you choose which of your friends to put first with aid such as medicine and food, the overtones of Rubble Without a Cause is much darker in terms of scene and content. The auto-save feature is also quite unforgiving as you can’t load a previous saves to see how your choices may play out differently.

To complement the fairy tale graphics of episode 2 of King’s Quest, The Odd Gentlemen have put together some very clever puzzes into the game and for the most part, these are relatively easy to solve but there were a few that had me stumped. Unlike pre-internet gaming where you had to get your answers from friends or magazines, modern gamers can easily access YouTube or their favourite walkthrough site to get the answers fast.

Thankfully I was strong on this occasion and like traditional point and click games, you need to find items that can be used in conjunction (perhaps) to solve various puzzles whether its now or later in the game. Just be warned that a few of the puzzles will make you scratch your head and sometimes you need to leave the game for a few days in order for your brain to digest the clues and work out the solution. These puzzles also effect the environment which do prevent you from moving on if you cannot figure it out.

Being a huge fan of the previous game, I found King’s Quest Chapter 2 – Rubble Without A Cause a worthy addition to the franchise that although was a little clumsy in terms of storytelling, still made me enjoy my time as the humble Graham as I attempted to outsmart and outwit these nasty little Goblins in order to return to the Kingdom of Daventry on surface. Once again the game is beautifully presented on the Xbox One with flawless voice acting thanks to Christopher Lloyd, great sound effects and an enjoyable soundtrack that successfully brings this series into the world of modern gaming.

Although King’s Quest Chapter 2 – Rubble Without A Cause is lacking the wonder of the first episode, it did have some nice moments such as old King Graham and his grandchildren plus some very nice graphics as he explores the labyrinth of the Goblins. I’m really looking forward to see how the next episode pans out, particularly with the character development of Graham.